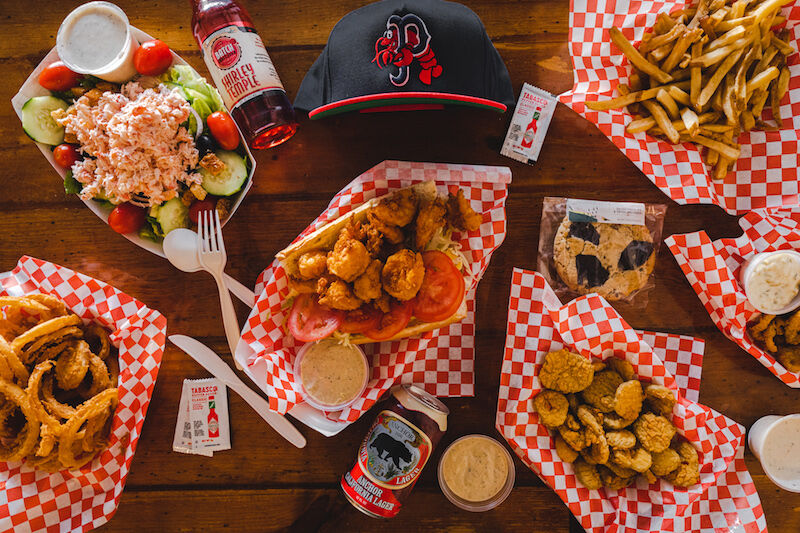 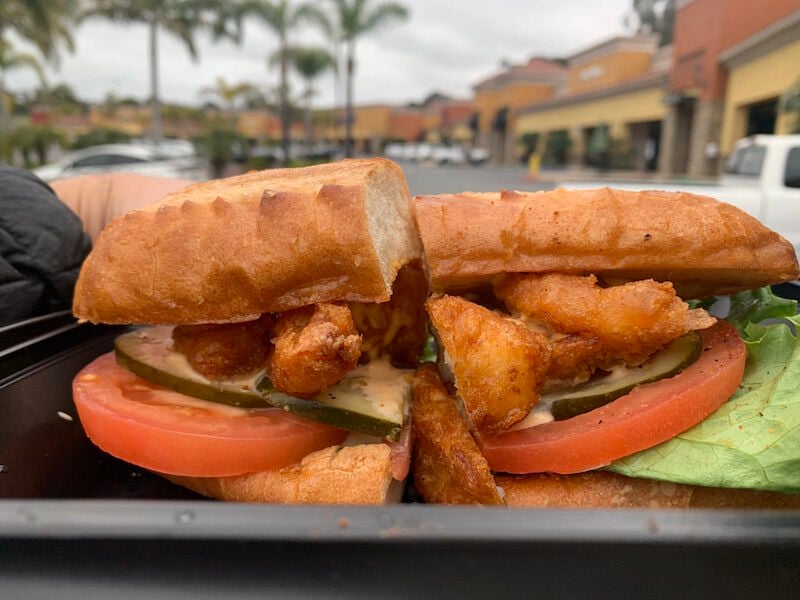 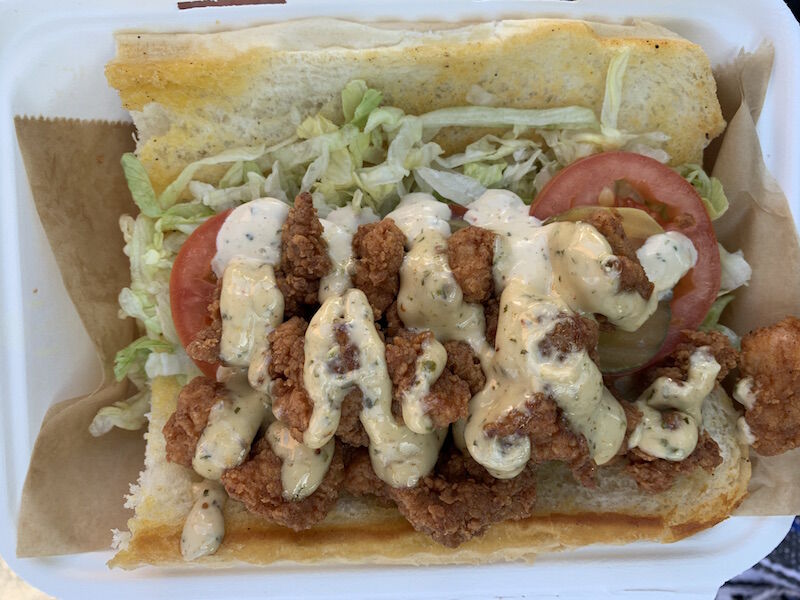 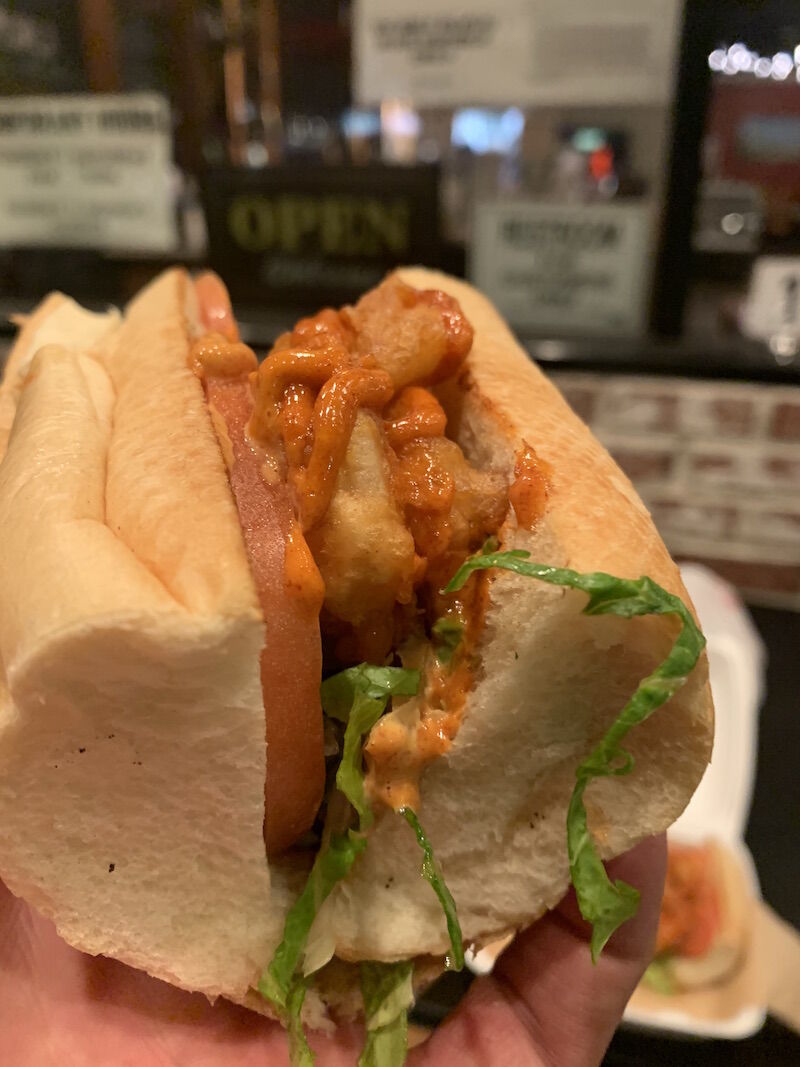 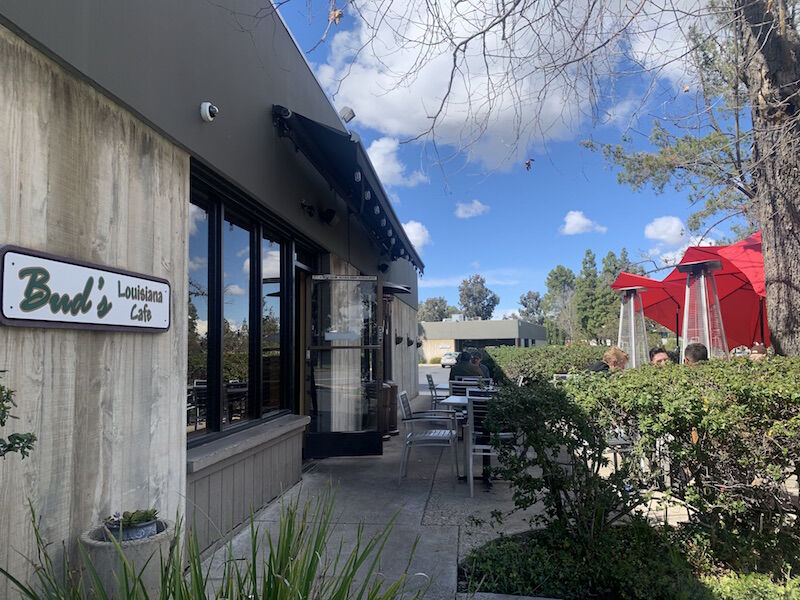 Hot chicken sandwiches are currently the trendiest food on the planet. Every place serves one—your favorite bistro, Jack in the Box, Enterprise Rent-a-Car. They’re fantastic. But the idea isn’t new. If a deep-fried protein in a sauce with a spicy kick sounds familiar, that’s because it stems from another Southern classic: the po’boy.

The po’boy is picket line food, of humble and egalitarian origins. The first one probably included hot beef, nothing deep-fried. But as it evolved through the years, it became the stage that showcased the dirty-sweet magic that hot oil performs on flour-coated foods. It doesn’t make us skinny, but it’s pretty hard to care when that crispy-fried shrimp is swimming in some remoulade sauce down the joy highway of your gullet. Just throw a little turmeric over your shoulder and sniff a salad now and then, and you’ll be fine.

For the last two weeks I’ve trekked across San Diego County in search of the best po’boy—from strip malls in Oceanside and Lincoln Park and Solana Beach to little shops in North Park and downtown to a business park in Tierrasanta. And these are my favorites, ones I'd recommend to people I like. I reiterate this now and always: I do not presume this list to be the end-all, nor the be-all. I don’t build altars of my own opinions, and I don’t eat with your mouth.

These lists are mere vehicles for me to get to know and tell the stories of the food and drink people in San Diego, jotting down my favorite things along the way. Like the story of how a No. 2 pencil predicted the success of Ron Suel of Shotcaller Street Soul Food, and the lifelong pursuit of Pete, of Pete’s Seafood and Sandwich, in North Park. The lists are my way of exploring the city, shining a little light on local people working their duffs off to create a food scene, whether that’s the duo behind Cane Patch in Liberty Station, or even the locals running a small, quality chain location (gasp!) of Fish District in Solana Beach.

I urge you to kick the tires on them yourself, add ones I missed, make your own list, and argue spiritedly. Support your local people.

A note on process: I made an initial list based on my own experiences of chasing food across San Diego for the last 12 years. Then I did internet research, put the call out to San Diego Magazine readers, and ask social media to chime in. I was able to narrow the list down to 13 places, and drove all over the county trying them all. Fried shrimp is not the only option in po’boyland, but for my search, I made a point of asking every restaurant their recommendation as to their best—and almost every single one pointed to that crustacean sea comma. So I did as I was told.

This was my favorite of the hunt. First, Pete uses Baja shrimp, plump and moist. Second, the dredge on his perfectly browned crust (the color of a Florida retiree) is seasoned perfectly and is both crispy and light (he imports special flour from the East Coast for this reason). But the remoulade steals the show. It’s based on a cherry pepper relish puree, a flavor combo famous in East Coast fish shops.

The key to a good po’boy is not to get diet-conscious on the good people of America. French bread—the classic and, some diehards will tell you, only bread for a real po’boy—has some thickness to it. Too little sauce, and your mouth feels like a sponge left out in the sun for a few days. (Originally, po’boy makers dug out the inside of the bread, leaving just the crust, so you didn’t have this problem. But in the ones I tried, at least, no one is digging out anything.) Cane Patch shows no sauce mercy, zig-zagging remoulade and ranch across bits of deep-fried alligator (like a stringy, but not dry, chicken) with pickles and tomatoes and shredded lettuce.

You really should read the story of Ron Suel, who, along with his partner Ravae Smith, managed to turn a failed donut concept into a soul food success story in San Diego. Their po’boy wins by doing the classic, simple things well. First of all, they start with Leidenheimer French bread. (Leidenheimer is a legendary bakery of po’boy culture in Louisiana.) Their shrimp is lightly fried and loaded on, but it’s that comeback sauce and the pickles that give it a real nice, generous zing to offset the deep-fry. This one’s harmony.

If you like things a little spicier, H Brothers in Escondido—a stylish little space with craft beer from Nick and Justin Hedayati, the brothers whose family also runs Chicken Plus—is the spot. The fried shrimp has a crackling, formidable crust on it, set off with the spicy remoulade and hyper-vibrant tomatoes that pop. (A downfall of some po’boys is watery commodity tomatoes.)

I’m sure someone will light me up for including a chain (Fish District is a small, San Diego–based chain with six locations across SoCal). But ignoring chains seems like a precious pursuit, and one that leaves holes in any hunt for the best. I’m sure no single mom-and-pop shop would say, “My sandwich is good as long as you don’t compare it to that place with multiple locations.” Anyway, the one thing you’ve got to have nailed before expanding is quality control, and Fish District’s is high quality. Good bread, well seasoned, plump shrimp, thick-cut tomatoes, a solid remoulade, and here’s their little trick—long-cut pickles so you get some of that sharp acid in every bite.

Chef Bud Deslatte worked his way through restaurants in Louisiana and Atlanta before bringing Southern food to San Diego in 2008 with Bud’s Louisiana Cafe. He sold the original and now has this little shop with partner Rob Adams. Theirs is a classic—flash-fried shrimp, shredded lettuce, tomato, remoulade—an example of someone with deep Southern roots paying homage to the rules that work.

New owners carry on the tradition set by Deslatte with this Southern staple in a business park in Tierrasanta (it’s a nice little oasis, with a patio). They’ve got a bevy of po’boys, but the nice woman on the phone (she’s also very nice in person, real warm hospitality here, even during a pandemic) said I had to go shrimp. And it’s a solid, classic entry.