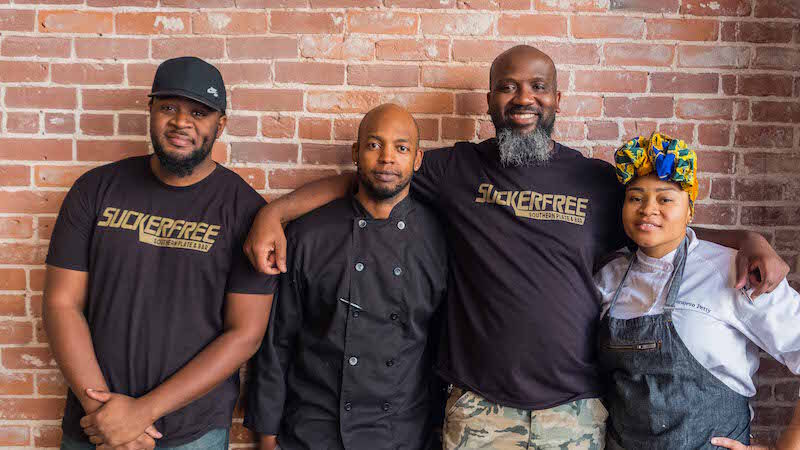 Ron Suel is so good at selling, I feel like I owe him money for this sentence. Take, for instance, No. 2 pencils. For people who went to grade school in the ’80s, it’s hard to overstate the raw scholastic chutzpah of the No. 2. The No. 2 people were in cahoots with the test people (Scantron). We were led to believe the only thing No. 1 or No. 3 pencils could write was “Just give me the F.”

“Seemingly every single kid in my third or fourth grade class would forget the No. 2 pencil,” Suel says. “I would get $5 a week for lunch money. I would take that $5 down to Walmart and buy a bunch of Skittles and Starburst and No. 2 pencils. I kept it all in a Trapper Keeper folder and sold that stuff all the time. I was like the Zack Morris of my school.”

Suel and his partner, Ravae Smith, own StreetCar Merchants of Fried Chicken, Waffles & Beer in North Park—their successful restaurant that is also their epic failure of a donut shop.

“The first day we open and we’ve got all these beautiful donuts—a fourteen-foot case of them,” he remembers. “And the first five people through the door order chicken. It’s 7 a.m.! And we said, ‘Well, we don’t start serving chicken until 11.’ And they were like, ‘Okay, I’ll be back at 11.’ Chicken took off, and we couldn’t give a damn donut away. In order to make money selling donuts, you have to sell a lot of them. North Park isn’t a morning town. We’d sell more donuts at night. But even then, four girls would come in, order one donut, and cut it in fours.”

This was 2009. Of course, now we realize there was a pent-up fried chicken lust in San Diego waiting to be tended to. But at the time, Suel says, very few restaurants aside from Bonnie Jean’s Soul Food specialized in it. Restaurateurs seemed to think the fried chicken market ended where the yoga pants market began.

From day one, there was a line at StreetCar. It was great news, and a disaster. StreetCar was frying fresh, whole chickens to order (mostly Mary’s Organic, Suel says), following his great-grandmother’s recipe. It’s a process that requires a big fryer and big patience. “We just had one little fryer for the chicken because we didn’t think we were going to sell that much,” he explains. “There was an hour and a half wait. We were getting our ass kicked every single day. Where I grew up, people know if you have to wait 45 minutes for chicken that’s fried to order, you’re cool with it. But we were in a boneless chicken, chicken tender, chicken nugget generation, and people can get those in minutes.”

Yelpers in San Diego slammed them.

“Those first reviews were terrible,” he remembers. “People would be like, ‘Yo, this food is great, but I’m still giving you two stars because it took an hour.’ It was frustrating. I realized educating your customer on a new product is more than half the battle.”

They eventually ditched the donuts, bought stadium-size fryers for their chicken, and turned it around. Now, they’ve expanded with Shotcaller Street Soul Food in Lincoln Park, Suckerfree Southern Plate and Bar in the Gaslamp, and plans for a live-music supper club downtown called Super (at the former RA Sushi spot).

The po’boy at Shotcaller—a simple, beautiful thing with fried shrimp in a creamy zing of comeback sauce on French bread—is a hell of a sandwich, and definitely on my list of the best po’boys in San Diego.

In our interview, Suel talks growing up as a Black kid in a town named after a Confederate general (Leesville, Louisiana), learning from family on both sides of the law, and his strategy for selling soul food in a city with a six-percent Black population. Our conversation has been lightly edited for brevity and clarity.

Ron Suel: My daughter’s mother told me a long time ago that I could make up to a hundred thousand dollars selling cars. I went down to the dealership and they hired me on the spot. I was like, “Oh yeah, I’m killing the game!” And then I found out they just hired anybody—just put the mirror under your nose, and if it fogs up, you’re hired. I grew up during the crack epidemic. So when I found the car business, it was like a legalized street gang. I couldn’t understand how you could make so much money selling cars. My family dynamic was really strange because my parents were never married. My mother has always been a hardworking, straight-laced citizen. On my mom’s side of the family, everybody worked jobs until they retired after 25 or 30 years, got the gold watch, upstanding citizens, no prison time. People on my dad’s side of the family have been in and out of prison; one served almost 30 years for distribution of cocaine, one ran a whorehouse. It’s a crazy dynamic. So growing up, I saw a lot of different angles and a lot of different sides. I definitely got my hustle and street knowledge and awareness and charisma from my dad. Then the work ethic and just staying with things came from my grandfather and my mom’s side of the family.

Did you grow up cooking?

When you grow up where I grew up, cooking is survival. You’re ironing and cooking at the age of four or five. I don’t fashion myself a chef or anything. But I grew up eating the cuisine and bouncing from Louisiana to Texas and Mississippi. And when I moved out to San Diego in 2009, Southern food was missing from the landscape.

Why’d you decide on donuts?

Ravae is an old friend of mine who had moved out here. I told her I was hitting the 20-year mark in the car business and I couldn’t do it much longer. We started talking about donuts because they were the hot trend at the time.

So a donut shop with… fried chicken?

My half brother came to town after he graduated. He’s out here, wildin’ out, we’re out in all the clubs, and he is wasted. He gets up the next morning and he is done. And so he’s rubbin’ his stomach and he’s like, “I just want some fried chicken, where can I get some?” And I thought, “Hmmm, where can you get some?” San Diego had Bonnie Jean’s, but that was like a two-hour wait. So I said, “I’m going to fry you some chicken the way my big mama used to do it with a cast-iron.” I had none of the materials. I had to buy everything—the pan, everything. I went down to Iowa Meat Farms, and they had beef tallow, which is what my great-grandmother cooked in. He sat there and he was dead quiet for about 20 minutes and he was like, “Yo, man, I know you were telling me about these donuts, but **** those donuts, man.”

You don’t use peanut oil or canola—you use old-fashioned beef tallow. Why?

Beef tallow is expensive as hell and it’s a mess to work with, but it stays authentic and that, to me, eats everything. It’s the best, but when you’re dealing with it in a 200-pound fryer, it’s just a nightmare—when we have staff turnover, because of the high volume, but also just because it’s a mess. Talk to me about Shotcaller.

Why’d you choose Lincoln Park when you made your name in North Park?

2Pac told me to think ahead. When we were opening StreetCar, the logical thing would have been to say, “Oh, I need to be in a Black neighborhood because I’m selling Black food.” And so we would have gone to Southeast San Diego and opened up there. But then we would’ve negated a big audience and a lot of money because—let’s face it, because of the gang culture and things that happened here in the ’70s and ’80s, as I’ve read and been told—a lot of white people aren’t comfortable going to Southeast San Diego. They’re just not; it’s that simple. So the original plan was to open in a neutral market like North Park. It’s the melting pot of San Diego. Plus, I know if I opened in Southeast San Diego first and tried to expand from there, Black people are going to call you a sellout because you left the community and opened up for the white folks. If I opened in North Park, everyone feels comfortable going—and then I open in Southeast San Diego, white people are going to go, “Okay, StreetCar is a reputable business, it looks good, it’s clean—I feel comfortable going to another one of their establishments out there.”

So the plan was to open in North Park and then downtown, create a good following, and then bring that crowd to Southeast San Diego.

Yeah, totally, without question. Because you’re going to gain a lot more respect and a lot more attention, and—as we hear so often—you’re going to have ambassadors of your business out there. They come in and say, ‘Thank you for opening up, thank you for taking a chance on us.’ Because there are a lot of business owners who won’t open up out there. They don’t understand the community and they don’t want to take the risks. If we can go out here and be successful, maybe perhaps we can attract someone else.

What do you see on the horizon for Southeast San Diego?

I feel like the community in the next seven to 10 years is going to come up. We’re getting a lot of crazy Oakland and San Francisco transplants who are able to come here and buy houses with cash. And they’re used to living in mixed communities, so it doesn’t frighten them. What we’re trying to say is: “There’s nothing to fear down here. If you’re a young restaurateur and you want to open a business, you can come down here and get affordable rent.”

You’ve got two daughters. One works with you at StreetCar. I’ve read that you want to build this legacy for your kids.

One thing I feel has been evading Black culture is… you have a patriarch in the family who runs a business, but either they choose not to educate their children on the business, or the children don’t want it. So when they retire or pass away they have to pass the business on to different hands and that business goes downhill.

What’s the secret to your po’boy at Shotcaller?

The po’boy is all about the bread. We bring in fresh Leidenheimer French bread. For me, authenticity has to be there. My grandfather always made them with Duke's mayonnaise, lettuce, tomato. We wanted to switch it up a little bit, so we used the comeback sauce [spicy tomato-mayo] to give it a little more twang. You gotta have the right fish fry. But to be honest, it’s just about keeping it basic. We’ve had a lot of different chefs come through our environment and say they want to do this and they want to do that. And I say, “Look, all that stuff may very well sell, but it’s got an expiration date on it. An apple pie will always be the number-one selling pie in America. Because that’s how you eat at home.”