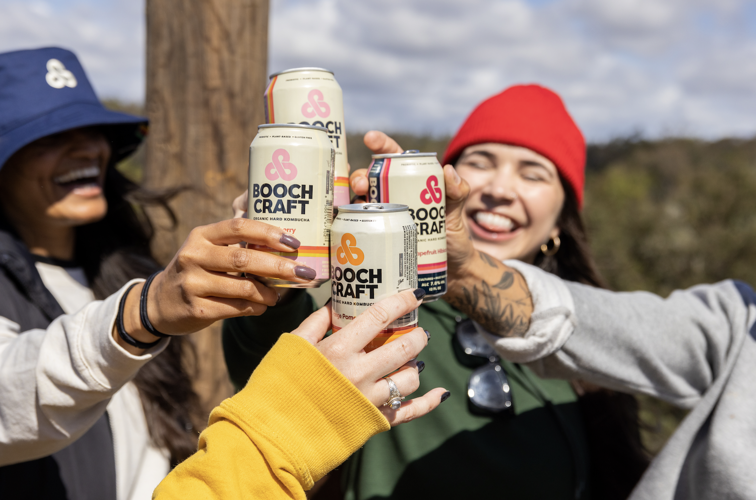 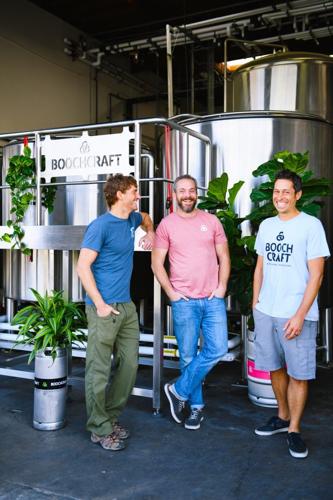 Longtime kombucha drinkers remember when the fermented, bubbly beverage was ripped from shelves in 2010 while regulators evaluated whether it should be labeled as an alcoholic drink. This caused a stink with kombucha drinkers across the country, but also created a gap in the market for high-alcohol kombucha brand Boochcraft.

“When everyone was going left to go under half-a-percent alcohol content, we decided to go right and make a fully fermented kombucha with high-alcohol up to six or seven percent,” said Todd Kent, Boochcraft co-founder and CEO. “We talked about being a B Corp almost from inception. We were really intrigued by starting a company we could pour our own personal values into and one that doesn’t have to sacrifice values to the profitability.”

Kent is an entrepreneur who’s worked in manufacturing most of his life. He and co-founder Adam Hiner met at a yoga class in Ocean Beach, where they both reside. Hiner leads Boochcraft’s sustainability and social impact initiatives, and his brother-in-law Andrew Clark is the mad scientist who developed Boochcraft’s alcohol-boosted recipes.

Their conversations with grocery stores gained traction in 2016 when Boochcraft was the only company making hard kombucha. Breaking into the market was an obvious priority, but running it with ethical business practices was also top of mind.

“We wanted B Corp because it’s all-encompassing—it takes into consideration environmental impacts, sustainability choices, and how you treat employees. It’s not a certification you can buy; you really have to live the values of B Corp.” The rigorous B Corp certification process ultimately took Boochcraft two and a half years to get. In April 2022 they became the first hard kombucha brand to achieve the designation.

Today, the vast majority of Boochcraft’s business is done in Southern California, with taprooms in Del Mar, a temporary pop-up in Normal Heights, and brewing facilities in Chula Vista. They have about 80 employees and a core lineup of five kombucha flavors. Their Liquid Art Lab serves as an innovation playground for R&D, releasing seasonal flavors three times per year.

The company prides itself on using fresh fruit that’s juiced in-house, which means flavors are dictated by seasonality of produce. Excess fruit is given to San Diego Food Bank for redistribution among families facing food insecurity. To date they’ve diverted more than 65,000 pounds of fruit from landfills into San Diegans’ homes for consumption.

2014: Boochcraft is conceptualized during a party at co-founder Adam Hiner’s Ocean Beach home.

2016: The company launches its first brewing facility in Chula Vista.

2019: Rather than throwing excess fruit in the compost, Boochcraft establishes a partnership with San Diego Food Bank based on an idea from their juicing team.

2020: A collaboration with local artists is initiated to create custom can designs for Boochcraft’s limited-edition releases.

Kai Oliver-Kurtin is a San Diego-based writer who covers travel, dining, events, and culture. Her writing has been published in USA Today, Condé Nast Traveler, Fodor's Travel, Marie Claire, and HuffPost, among others.