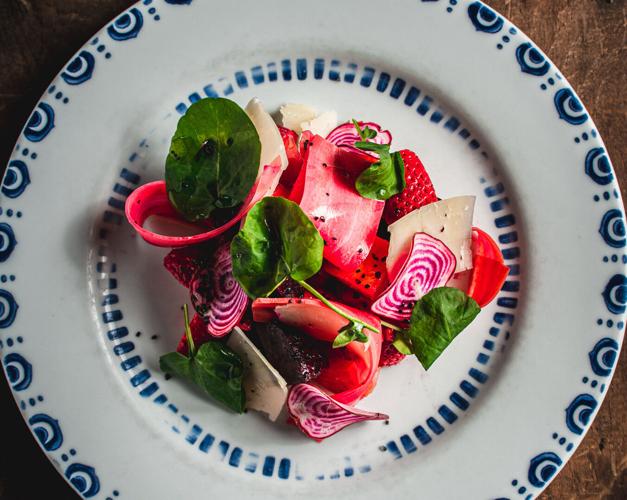 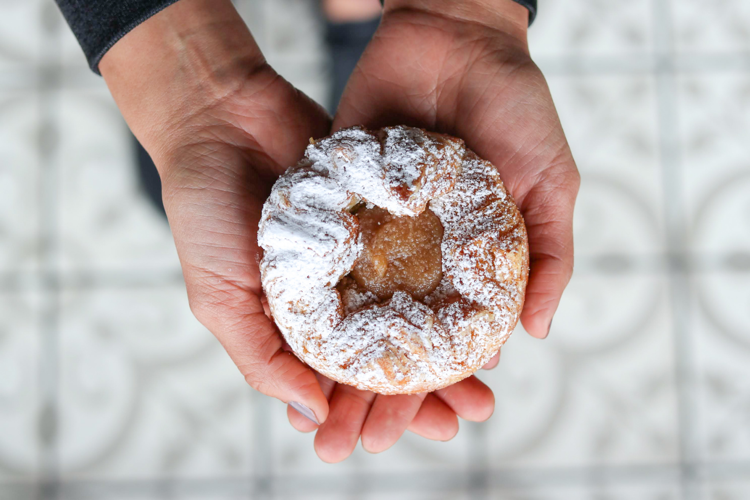 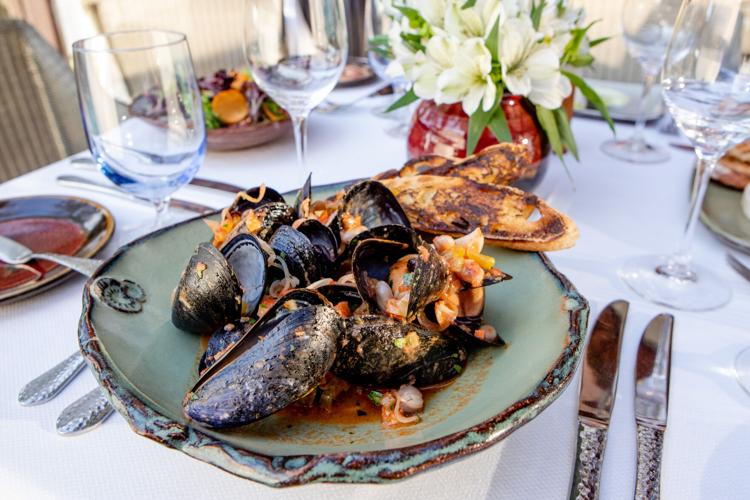 Italian Food on the Set of Ozark

The man-made pontoon boat wonderland known as Lake San Marcos has distinct midlife-spring break vibes, and Amalfi Cucina Italiana has the catbird’s seat of the suburban oasis. Owned by four Italian friends, Amalfi leans on the cooking of six- time World Pizza Champion, Marcello Avitabile. If joy is your thing, get the artichokes and the fried eggplant with burrata.

Herb & Wood was where chef Brian Malarkey and co-owner Chris Puffer started their prolific run. Animae and Herb & Sea now share the shine, but the flagship’s young gun Carlos Anthony came out of the pandemic strong. Like Malarkey, he’s a frequent flier on Food Network because he’s got a clinical amount of personality—and he can really, really cook.

Something special is brewing at Mujeres Brew House in Barrio Logan. Women-owned and women-led, Mujeres is a hub for local artisans, a music venue, an educational club, and a community gathering space where beer drinkers, families, dogs, and neighbors can come together safely, comfortably, and happily.

One of the most drastic facelifts in Downtown’s modern history is happening right now at Broadway and PCH. And Seneca—Consortium Holdings’ Italian thing—has the best view of the future. It’s a nautical stunner with brass ceilings, high-gloss wood floors, fringe everywhere and a Miami amount of plants.

All due respect to legends and icons, but it’s time to admit as a city that In-N-Out’s fries have always been flaccid disappointment sticks. Hayes Burger in Barrio Logan is a far superior burger- and-fries option (they’ve even got their own secret menu with Jimi Fries and “chile guero”). Plus, they have beer.

Craft beer is a nerdy sport, but there are levels. The deepest level in town is White Labs—a fermentation laboratory and analytical testing facility in Miramar that also happens to have a small tasting room. Patrons can test their palate with side-by-side brews, each tweaked slightly to highlight specific yeast strains. Beer science is especially fun science.

Sunset Deck at a Local Winery

Feelgood Hand-Off of a Municipal Heirloom

When iconic restaurateur Bertrand Hug sold Mister A’s, he’d earned the right to find the highest bidder and backstroke in the ensuing financial largesse. Instead, he sold to longtime right-hand Ryan Thorsen. Thorsen has tapped designer Mauricio Couturier for a light sprucing of the mighty institution.

Pacific Beach has a breakout baker in Justin Gaspar, who cut his teeth at the famed Manresa Bread in NorCal. At his shop, the runaway hit is the flaky, sweet and salty, crunchy-soft vennoiserie known as kouign-amann (pronounced “queen ah-mahn”), filled with apple butter, salted caramel ganache, strawberry rhubarb, and spiced plum.

Wholesale Abandonment of a French Tradition

At Richard Blais’ steakhouse at Park Hyatt Aviara, while everyone else is ogling the bone-ins and the woodfired proteinapalooza, shift your gaze to the low-key star of the show. The garlic croissants—a loving hybrid between garlic bread and the infinitely layered pinnacle of French dough art.

It took years for the folks at Spicy House to stop asking, “Are you sure?” when I’d order the cold chicken with house special sauce. It’s also called “saliva chicken” because it’s good, and it’ll make your mouth water. Make it numb, too, thanks to the fiery pool of Sichuan peppercorn oil this cold poached chicken comes swimming in.

Seat in the Booming House of Oceanside

The Oceanside culture explosion we all predicted for the last 100 years is now. And Seabird has the perch of perches. Sit on the patio at the Shore Room, gaze at the infinity pool (our bad, that’s the Pacific Ocean), drink a Yacht Rock (spicy tequila, chartreuse, honey, celery, and lime), stare at the Top Gun house (it’s a pie shop now), take someone to bed or lose them for a while.

Brunch Worth the Speeding Ticket

We love Coronado, but we don’t go for the raging nightlife. So hit up this mighty French bistro for brunch. Little Frenchie (from Blue Bridge Hospitality, who gave us Liberty Public Market) has the croques, benedicts, crepes, and quiches—but it also has the Francophilic self-respect to offer snails before noon. Just watch your speed (CPD gives out the most tickets in the country).

The fancy-jungle wallpaper alone is worth the visit. The family behind Crab Hut tapped chef Jon Bautista (ex-Georges at the Cove, Common Theory) for a Vietnamese/pan-Asian fine-dining star in a tiny strip mall in Golden Hill. It’s all pretty great, but especially the house-smoked duck (also dry-aged in house) that sells out every night.

Restaurant You Need a Docent For

Chef Who Earned This

Very few right-hand chefs stay at a restaurant for three years, let alone 13. But Kelli Crosson farm kid turned chef—got to study under one of the greats: Jeff Jackson. And this year she arrived. Jackson handed her the keys to one of the city’s most iconic SoCal-French kitchens and one of the first to truly, no-bull practice farm-to-table. Time to meet the new boss.

Place to Whisper into Your New Friend, Mezcal

The team behind Kettner Exchange took over El Camino in the Casbah District (far as we’re concerned, that’s an official part of town). With chef Brian Redzikowski (Le Cirque, Joel Robuchon) overseeing, food was a no-doubter. But it’s the design (we’re going with “moody Caribbean love nest”) and the collectors-quality mezcal flights that seal it.

Eating as a Welcome

Reclamation of an Iconic SD Spot

Mission Valley is shedding its car salesmen-and-Costcos rep. And Town & Country Resort is finally able to show off its $70 million renovation (finished in 2020 but, well). Their signature restaurant has chef Joshua Mouzakes, who staged at French Laundry and served as chef de cuisine at Hotel Del, doing things like bison tenderloin in ginger-soy.

Revamp of the Old-Timey Butcher Shop

If chef Brad Wise bumps into you, you turn to gold. The lines for his Solana Beach steakhouse Rare Society seem to start before dawn. But with Wise Ox, he’s resuscitating the art of the American butcher shop, with pasture- raised meats, hand-cut proteins, all kinds of marinated meat creations, and sandwiches. No. 2 just opened in Carlsbad.

Taste of the Local Poles

Tommy Gomes is a fifth-generation San Diego fisherman, and one of the country’s foremost experts on sustainable seafood. He and partner Mitch Conniff (Mitch’s Seafood) opened this fish market at Driscoll’s Wharf, selling fresh catch straight from local boats. Seabass, opah, rockfish, bigeye tuna—all fresh, all here (if it was caught that day).

Solution to the Omnivore-Vegan Beef

The North Park flagship with the city’s best brisket laid shuttered for 35 years (it was three, but this is a feelings exercise). Now reopened, it’s been redesigned with nicer tables, a real kitchen, and a wine program. But the most notable thing is the vegan menu. This’ll either bring peace between the omnivores and vegans, or exacerbate the hair-pulling.

Restaurant That’s Not a Restaurant

Socheath Sun is the best chef in San Diego you haven’t heard of—yet. Inspired by her Cambodian heritage, Sun’s Southeast Asian-inspired plates range from vegan lechon kawali sisig burritos to Singapore chili crab noodles and can only be pre-ordered through her Instagram every other week or so. IYKYK.

Coffee with a Side of Social Justice

Corn tortillas made on-site form the base of this lively spot’s specialty: perfectly crunchy rolled tacos. Everything on menu is gluten-free, which makes it especially delightful and stress-free for those with wheat allergies and celiac.