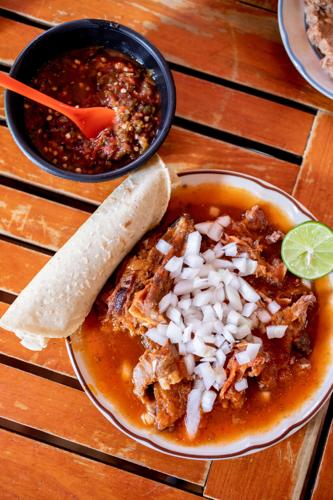 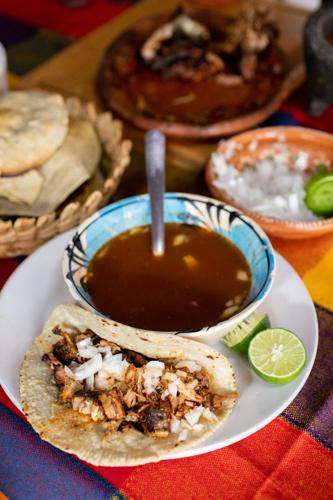 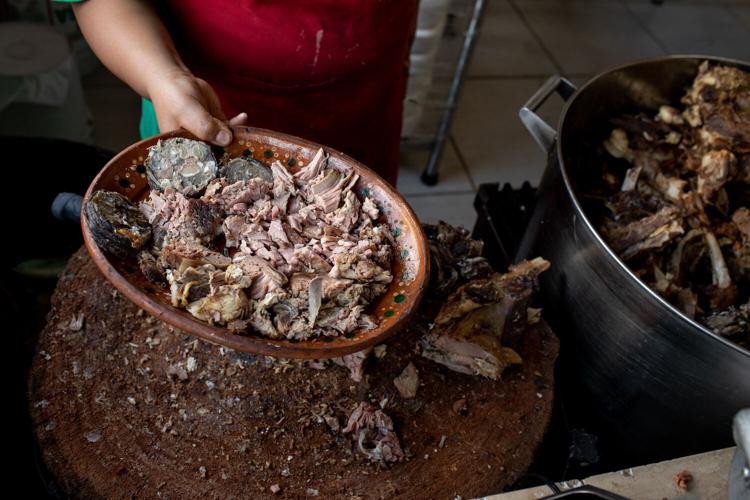 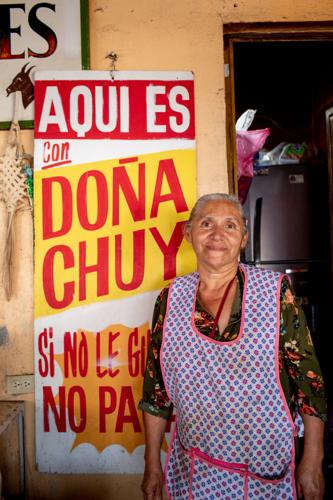 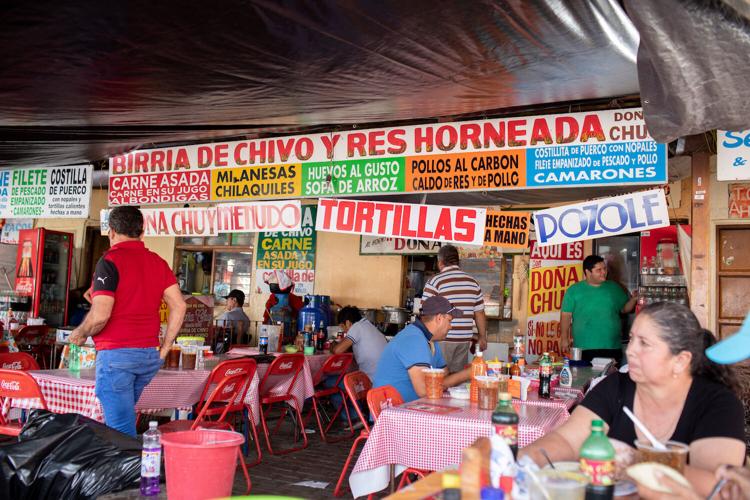 I stumbled into my room with my head spinning and ripped off my crimson-oil-stained shirt before crawling between the white sheets, as crisp and chilled as the lettuce in a steakhouse salad. I planned this trip to Guadalajara to combat a burned-out brain on two fronts: with the cool luxury of a hotel pool and by gorging myself on flame-red bowls of birria, the regional specialty of stewed meat prepared with tomato and pepper broth.

The former brought me to Tequila, an hour from Guadalajara, where I found Casa Salles, a pristine boutique hotel with its own Tequila factory. I swiftly located the latter across town at Doña Chuy, situated on a triangle of cement pressed up against the highway.

As the trend of birria swept through the U.S. over the last few years, even the best versions left me wistfully nostalgic for some ideal of birria stuck in the back of my brain, one that bowled me over with flavor and cured even the worst of hangovers. I couldn’t pinpoint the version I remembered, but, like Justice Potter Stewart on obscenity, I knew I would recognize it when I saw it. And I knew for sure what it wasn’t: bland beef wrapped in factory-made tortillas and drowned in cheese.

A catch-all term for “French dip but tacos,” as a friend once heard it described. Soup bowls filled with the same kinds of shortcuts and blandness that, writ large, I blamed for my burnout. I doubted that a one-week vacation could completely restore my verve, but it seemed plenty of time to find the most comforting consomé.

As the belching trucks rumbling by drowned out the plasticky crinkle of the checked tablecloth, my birria de chivo arrived, brick-red and stocked with goat, the tender ropes of meat just barely clinging to each other in a sea of tomato broth. My server slid toward me a plastic Tupperware filled with a jumble of metal silverware and bowls of chopped cilantro and onion. Despite a long list of drinks on the overhead sign, they only actually stocked glass bottles of Coke.

But they more than made up for the variety in salsas: three selections on the table showed their freshness in crisp colors, each cresting the top of a deli quart container. When I went to use one, my server stopped me, handing me a plastic water bottle containing a fire-engine red glop studded with pepper seeds instead. “This one for birria,” he said.

I slurped the spicy broth with a homemade tortilla in one hand, a napkin to blot the sweat from my forehead in the other. Halfway through, I looked up, and a woman across from me asked what she should order. I grinned and recommended the birria de chivo so fervently that I knocked a significant amount onto my shirt. I blotted it a bit, mopped up the last of the soup, and strolled back to the hotel, drunk on goat broth and success.

Two days in, I had found the birria of my dreams and considered just leaning into the other half of the trip—laying on hotel beds and pool deck lounge chairs—for the next week.

But a tiny, birria-colored-devil standing on my shoulder asked, “What if there’s even better birria?” I soldiered on to Guadalajara to scour the cityscape for soup that lived up to Doña Chuy’s. The decked-out tourist-favorite Birriería Las Nueve Esquinas failed, but I got to walk below the city at the brand new El Museo de Sitio del Puente de las Damas nearby, featuring a recently uncovered 18th-century bridge.

Fueled by a stop at Cantina La Fuente, where ice-cold Victoria beer chills in open-topped coolers stacked with bricks of ice the size of microwaves, my quest resumed. I struck vermillion goat gold at La Birria de Oro. Inside the pale salmon walls, bowls came to the table brimming with meat, stacked with chopped onion, whose sharpness woke up my sleepy taste buds.

The meat, chopped small here, felt like biting into Gushers, only instead of sickly sweet ‘90s candy juice, it released flavor-packed broth. I worked my way through the bowl and the stack of freshly made tortillas, then ordered a jericalla for dessert, as if the smooth burnt custard might prolong the joy of a good birria through proximity.

The next day, a friend desperately in need of the dish’s reviving properties brought me to Birriería El Chololo, which serves birria tatemada—oven-roasted, with the consomé served on the side. The crispy charred edges of meat and drinkable bowl of broth soothed her searing hangover and showed me a totally different style of birria.

I came to Guadalajara to find the ideal birria, the one that showed me what all the versions at home failed to do, and instead, I found three very different dishes and myself confused.

I headed for the hills. Specifically, to take a class with Maru Toledo, the cooking instructor, culinary researcher, and author who spent the last two decades documenting the food of Jalisco. Over mole made from charred tortillas and pebbly sun-dried tostadas raspadas, I asked my burning question: what is the original, the ideal, the peak of birria?

Birria can be anything, Toledo explained. The Spanish utilized the lush river valley in nearby Ameca for raising cattle, hiring local men to herd the animals and paying them with a feast featuring the local “agave wine,” (now better known as Tequila) and a slaughtered calf. They rubbed the veal with chile paste, describing the method as “birriaba” meaning smeared, as one might with mud, and cooked it buried underground.

Soon, they found it worked well on the superfluous male goats from the dairy industry in nearby Zacatecas, and local small game and poultry. Any type of meat, cooked in any number of fashions, could be birria, so long as it was smeared with that adobo before cooking.

Back in the city, I embraced Toledo’s wisdom and sampled a creative clam birria at trendy seafood spot La Panga del Impostor. After, I wandered to the Hospicio Cabañas, where a free tour guide explained that perhaps the reason José Clemente Orozco could cover the walls and ceilings of the one-time orphanage with such impressive works of art with only one hand, and in just 11 months, involved cocaine.

I came away inspired. My burnout, I concluded, came not from a lack of ideas, but from a lack of the proper drugs. I’m too old to adopt a new addiction to a powerful and pricey stimulant, but that doesn’t matter. As I learned this week, birria can be anything.