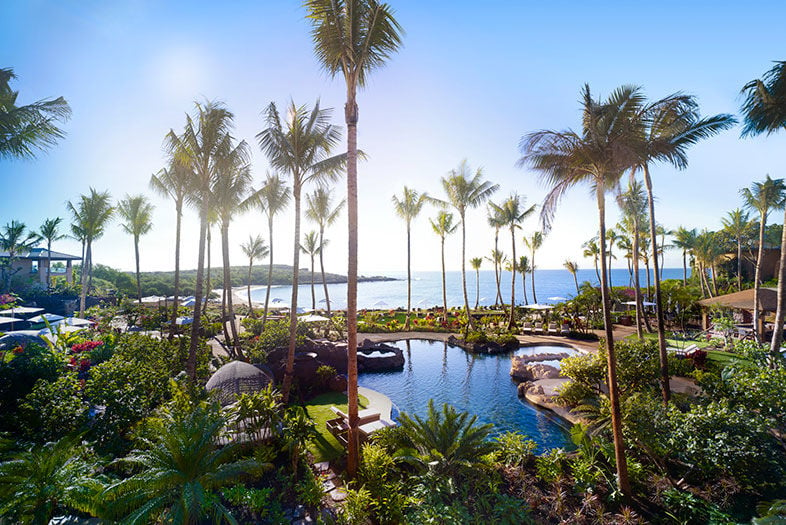 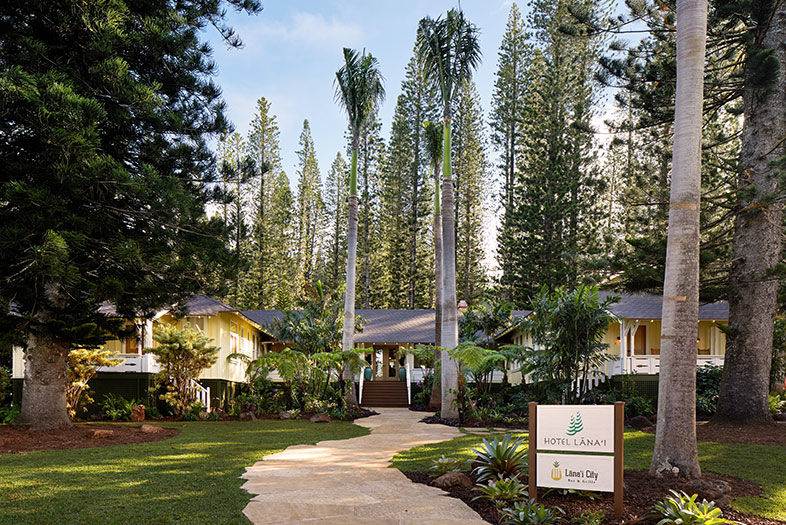 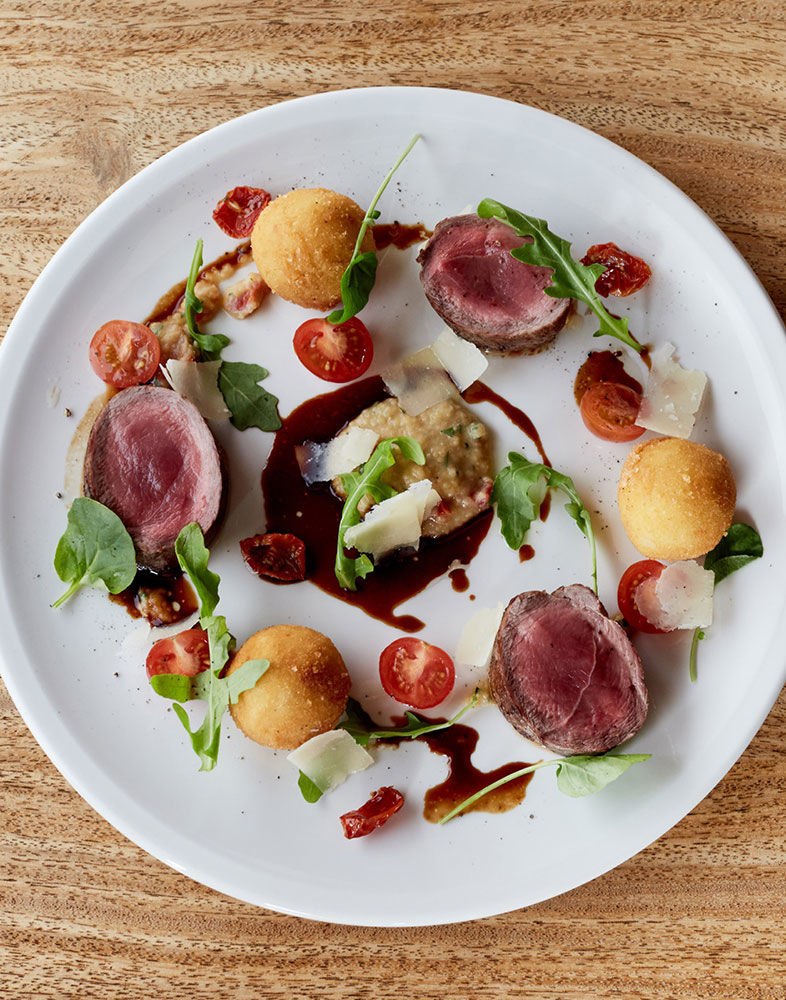 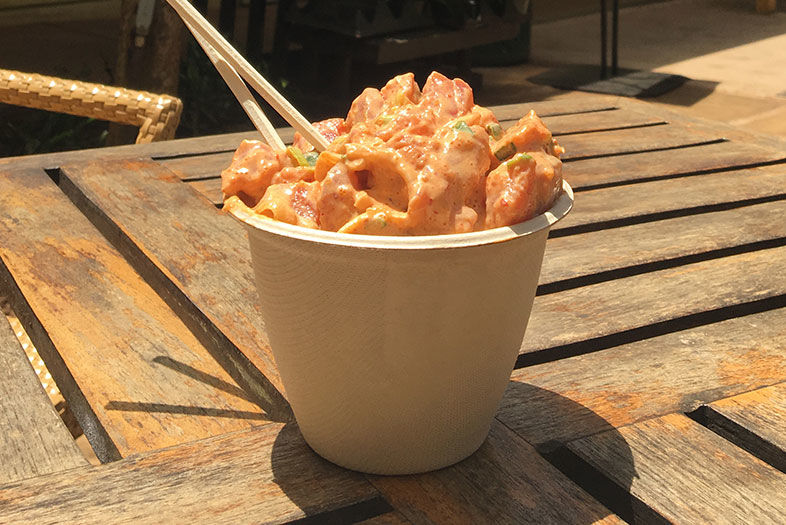 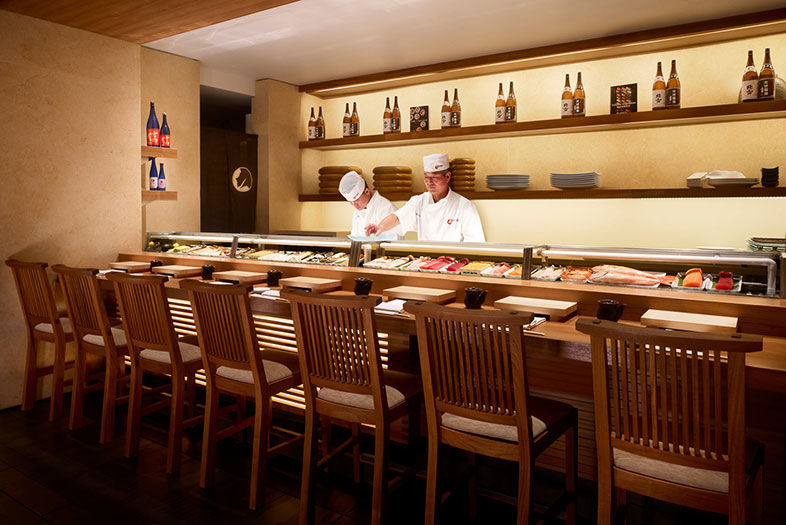 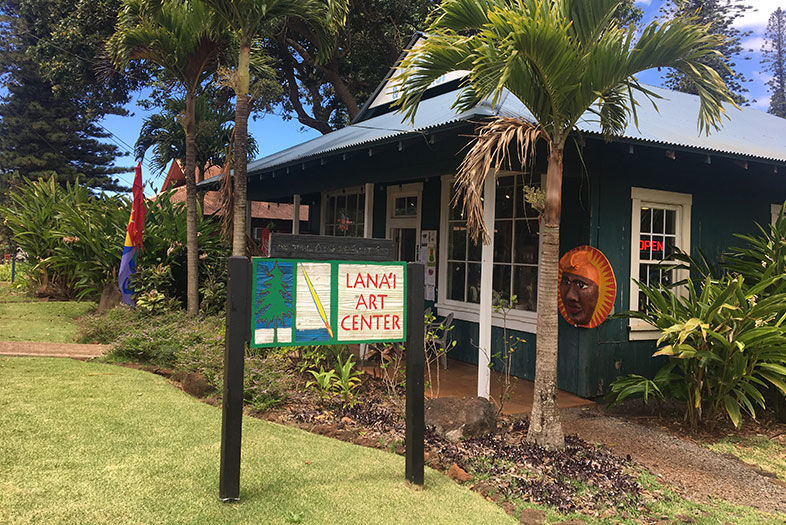 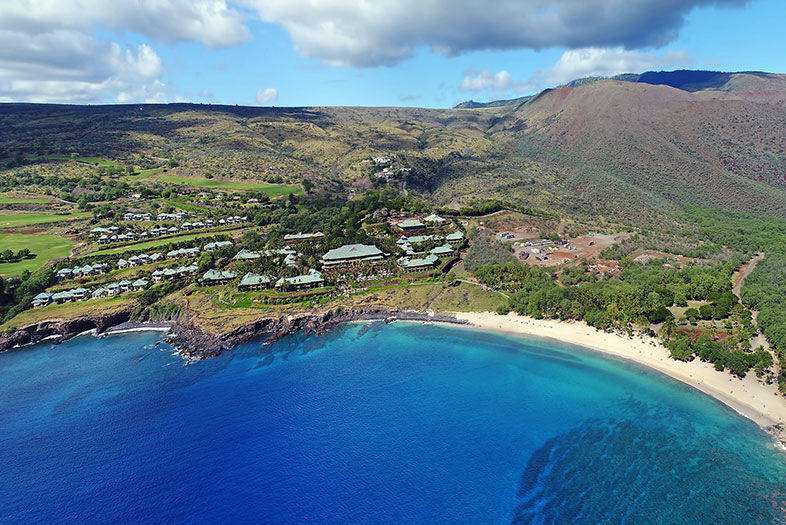 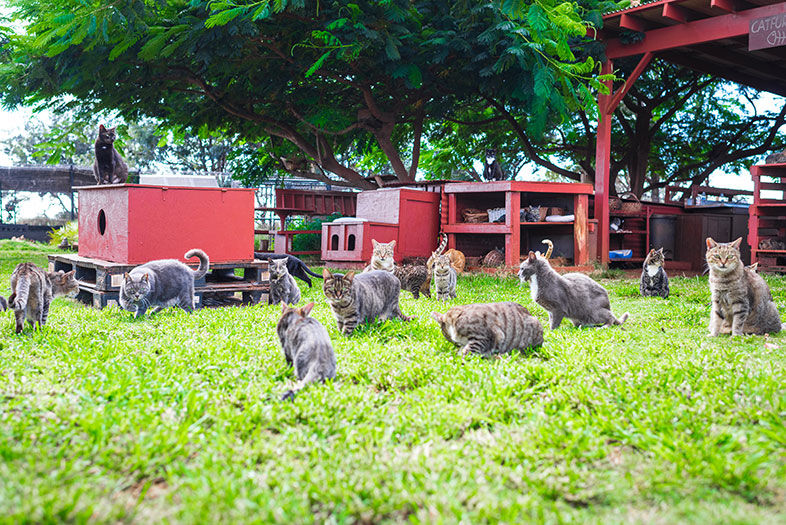 If you want oceanfront lodging, the island’s only option is the five-star Four Seasons LÄna‘i. Your Four Seasons experience begins the moment the plane hits the tarmac at LÄna‘i Airport—which for commercial flights is only a few times a day to and from Honolulu (times are posted on a felt board in the single terminal). Your luggage is carted directly to a resort shuttle, then it’s just a 25-minute drive to the hotel, which skirts right up to Hulopo‘e Beach and overlooks the bay of the same name. Celebs like Julia Louis-Dreyfus, Jessica Alba, and Will Smith have all stayed at the 213-room resort.

There are activities and amenities aplenty to upgrade your stay: free fitness classes, including a new aerial yoga option; a spa with massages, scrubs, and a Ti Leaf Relief Wrap to soothe your sun-kissed (or burnt) skin; the Jack Nicklaus–designed Manele Golf Course, where Bill and Melinda Gates tied the knot; and a roster of excursions, from helicopter tours to sunset cruises, archery, and more.

You can even hire an "ambassador," essentially a butler to be at your beck and call 24 hours. Chances are they’ll be local or even native to LÄna‘i: on an island of just over 3,000 people, the Four Seasons is the largest employer, with about 500 workers.

For a boutique—and inland—alternative, check in at Hotel LÄna‘i. Reopened in December after a months-long renovation, it’s bungalow chic with only 10 rooms just steps from the town square in LÄna‘i City.

Nearby, the Four Seasons is overhauling The Lodge at KÅ‘ele into a wellness retreat, rumored to open early next year.

Seafood is naturally a staple in Hawai‘i, but on LÄna‘i, venison is king. Hong Kong brought deer to Hawai‘i in the 1860s as a gift to King Kamehameha V. But not until 1920—around the time James Dole purchased most of the island for his pineapple plantation—did the animal come to LÄna‘i as a secondary protein source to fish. Today, LÄna‘i is home to the largest population of free-range axis deer in the world—some 20,000 overall. To control the population, it’s open-season year-round.

You can order venison at Four Seasons’ One Forty restaurant. Or try it tartare and topped with a fried quail egg at Hotel LÄna‘i’s LÄna‘i City Bar & Grille.

For poke, head into Richard’s Market in LÄna‘i City. It’s just like it sounds—a grocery store—but in the back, they’ve got seven or eight kinds to choose from: limu (seaweed), crab kimchi, tako (octopus), and spicy tuna, for a taste. Buy it by the pound or in a small-to-large serving over white or brown rice to eat on the spot, or on the humble patio. Across the town square, Blue Ginger Café dishes breakfast staples like Spam and eggs in large portions, and Pele’s Other Garden is a deli by day and Italian bistro by night, with a bruschetta not to ignore.

Back at the resort, there’s Malibu Farm to dine alfresco or even to order poolside and, for dinner, the world-famous Nobu. If you’re really hungry, go for the teppanyaki, a 15-course private meal. And don’t skip out on Sake Sundays, a crash course on the Japanese rice wine that includes four pours and a history lesson behind each.

No matter where you indulge, always follow up with a gingersnap and pineapple coconut ice cream sandwich at Sports Bar & Grill. Not only is it a sweet way to end your day, it’s also the last place you’ll be able to find a drink—the city shuts down around 10 p.m. and this bar closes at 11.

LÄna‘i’s secluded beaches and resort might be the main draw for many, but the dry land is in a league of its own, thanks to its storied history shown in every bit of the scenery. Holoholo is the only way to take it all in. In Hawaiian, it means to adventure, somewhat aimlessly, by whatever means you desire—foot, car, boat, horseback, etc. We advise going by Jeep. Rent one at the resort (you can book a guide or an ATV, too) or from a local spot like LÄna‘i Jeep Rentals or the new LÄna‘i Car Rental in town, then hit the island’s one road, the KeÅmoku Highway. Mainly four-wheel-drive vehicles ramble along the tree-lined corridor, whose offshoots lead to otherworldly off-roading sights like Keahiakawelo (Garden of the Gods), a Martian spread of eroded rocks that change color depending on the sun’s angle; and Shipwreck Beach, a six-mile stretch on the north shore with views of two intentionally grounded Navy vessels.

During your off-road pursuits, you’ll notice black plastic peeking out of the red clay. That’s from the "Pineapple Island" era, when the farmers lined the soil with plastic to help retain moisture. More than one fifth of LÄna‘i was reserved for growing the fruit, which saw its last harvest in 1992. Twenty years later, Larry Ellison, tech tycoon and founder of Oracle, purchased 97 percent of the island from David Murdock, chairman of Dole Food Products, for $300 million. Thankfully, Ellison has treated it with integrity, as seen in the charms of LÄna‘i City.

On Saturdays, locals set up a farmers’ market in Dole Park, retailing vintage clothes, produce, and food to devour on the spot. The close-knit vibe continues in the LÄna‘i Community Health Center, which offers classes like yoga, Pilates, and tai chi, the latter taught a few times a week by Nobu’s teppanyaki chef, Hung Nguyen.

Surrounding the square, you’ll find Hula Hut for souvenirs, The Local Gentry boutique stocking resort and island garb, and the LÄna‘i Art Center. The 30-year-old nonprofit sells only artwork made by locals, from higher-priced ceramics and prints to knitted kids’ toys and a "$20 under and wonders table" topped with children’s creations.

Overlooking it all is the Hotel LÄna‘i, where on Friday and Saturday nights you can take in music at the LÄna‘i City Bar & Grille—a Four Seasons shuttle runs hourly between here and the resort.

Back at the public Hulopo’e Beach there’s a marine reserve and reef ideal for snorkeling. Resort guests can borrow equipment from a kiosk, or just post up on the loungers. Forgot your sunscreen? Up at the Four Seasons’ pools—one for adults only, another for all ages, both open 24 hours—they hand out Coola SPF 30 like candy. Apply to your skin, take your pick of a cabana, lounge chair, or a coveted hammock, and sit back. If you plan to splash around after dark, be sure to catch a glimpse of Orion and Scorpius. Hey, only on LÄna‘i can you achieve an aloha state of mind even at night!

Welcome to the Fur Seasons

Want to give your camera roll a break from the scenic beauty? The LÄna‘i Cat Sanctuary is home to over 600 cats. Most were once feral; all of them are now fixed and named, and about forty percent of them can be adopted. The nonprofit has been featured in People magazine and draws thousands of kitty-loving tourists and plenty of locals willing to volunteer. Swing by any day from 10 a.m. to 3 p.m. for your feline fix, and if you want to volunteer, just email them ahead of time. They even welcome you to set up your own picnic.