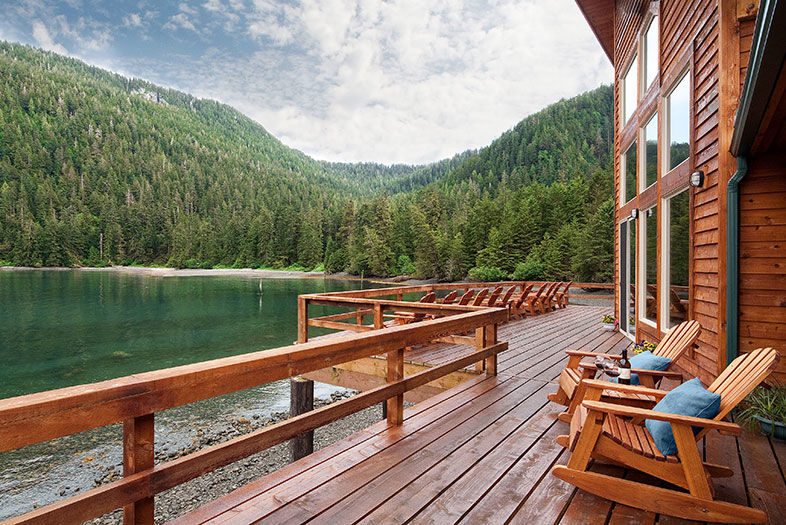 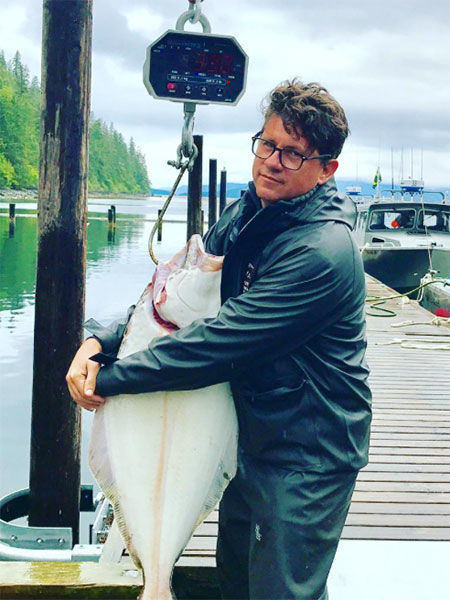 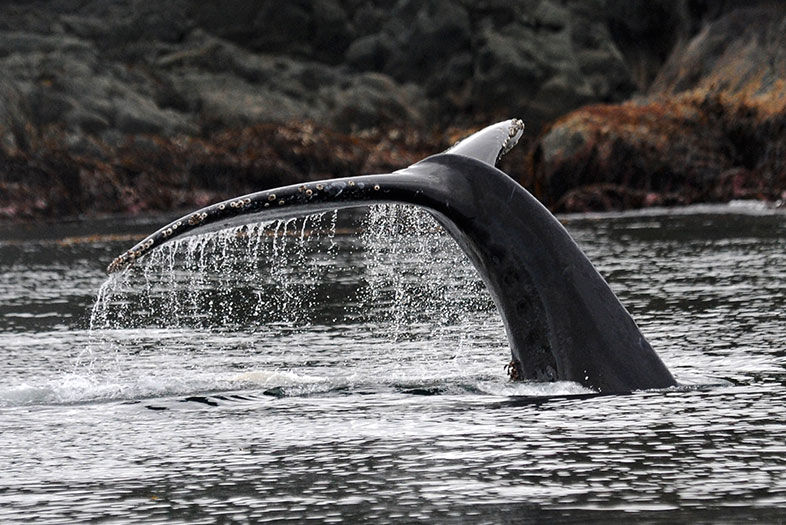 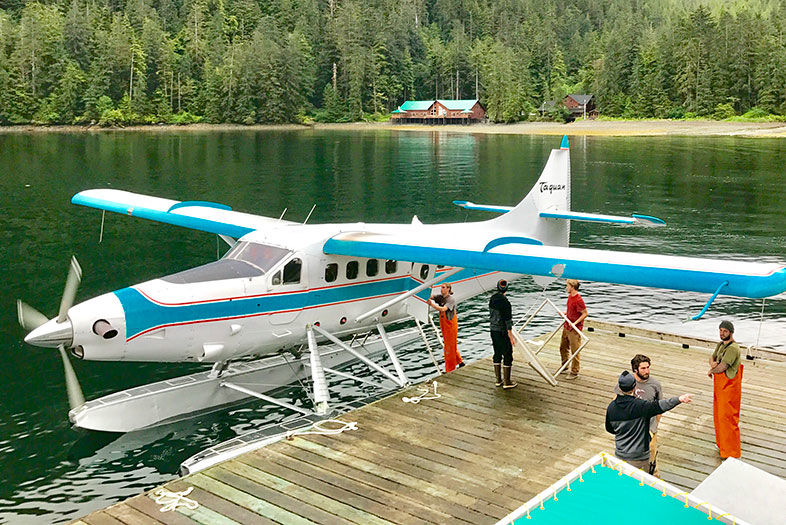 First thing you realize upon landing in Ketchikan, Alaska is that bald eagles are like white people in Maine. Everywhere. Even if locals are bored of them ("They’re like sky chickens," one tells me), the regal predators, lording in trees shoulder-to-shoulder, are a banner American moment for a suburban Southern California kid on his first trip to the Last Frontier.

From Ketchikan, ten of us board a seaplane to Steamboat Bay Fishing Club (SBFC), the only human dwelling (a ridiculously high-end one, at that) on Noyes Island. Seaplanes are Alaskan taxis—Priuses don’t get far in these parts—and they fly low, offering a sky-chicken’s view of the islands, lousy with emerald spruces and cedars. I try to spot a bear, with no luck.

Our SBFC guide tells us to make important calls. This is the last time our cell phones will work for four days. We will soon be detached from the matrix and alone, with nothing but our modest luggage and 30 personal SBFC attendants to save us.

We stay at SBFC in "the residence," quite literally a home for 16 fisherpeople. It’s made of pale island wood and dreams, with its own chef and fireplace and always-open bar and game room with a movie screen and pool table. The 100-foot deck serves as an amphitheater for the sunset over the bay. Custom rubber boat gear is hung in the foyer with our names. The floor of our dining room is made of glass in the shape of the stream directly below it, where you can watch the salmon flip, flop, and do heroic things to swim their way upstream to their evolutionary destiny. (Hint: It’s sex.)

If you want to rough it, SBFC is not your place. If you’d like to enjoy yourself, it is. It’s the Taj Mahal of Alaskan fishing.

Each morning, donut-shop early, we wake and board our boats. In summer, Alaska is all fishing boats. They will not be here during the winter, because that’s when Alaskan waters murder people. This many boats activate my dormant competitive gene. I want to catch more than every single one of them.

The Alaska Department of Fish and Game allows nonresidents to catch one king salmon per day to a maximum of three annually, and one halibut per day with no annual limit. Our guides take fishing quotas seriously. They don’t cheat, even a little. This is inspiring, because our oceans are overfished. A little thing called feeding humanity depends on small-boat ethics.

At some point, I pledge to never grow bored of seeing humpback whales breach 30 feet from our boat—close enough to intimidate. Being bored of that would be like frowning at puppies. But, holy hell, the whales. So many. Like sea chickens. They play. They breach and blow their holes. They flirt with boats. Their constant whale-ness tests my determination not to let miracles become mundane.

Fishing is not a sport of my people. My people would die with alarming speed during any apocalyptic situations. On boats I mostly catch beer. I’ve caught two fish in my life. One was protected by the state (a Garibaldi on Catalina Island). My 21-year-old girlfriend had to free it from the hook because I openly fear violent animal-flopping and have a phobia of fish teeth after seeing the movie Piranha early in my development. If I can catch fish in Alaska, so can a stapler.

Every guest at SBFC is assigned a guide/boat captain/fish whisperer. Ours is Dennis. He started fishing when he was nine years old, which was a long time ago. He looks like Popeye. I nickname him He He because he giddily yells "HE HE!" when we spot a group of salmon. Halfway through our trip, I see him intensely staring at the bottom of a Styrofoam cup. To an outsider, it might appear as if Dennis is having a psychotic break. He points to three cups above his steering wheel, scrawled with numbers. They’re coordinates of his secret fishing spots. "That’s my library," he says of the cups.

I open a craft beer (provided by SBFC) and get ready for the long, unsuccessful bore of fishing that I’m accustomed to. Within 20 minutes, I have an 18.5-pound king salmon on my line. It’s a fighter. It "runs." I would run, too, if I’d swum all the way to Alaska to have sex and some unskilled fisherman managed to get a hook in my mouth. I reel it in, all the way into Dennis’s net, and feel immense pride. Five minutes later, I pull up a 33-pound halibut, half as big as me.

First thing you do when you catch a fish is beat it in the head with a stick called a gaffer. I knew this, but somehow (psychological repression), I forgot. It’s humane, the quickest way. Still, fish clubbing is hard to watch. But if I can’t watch it, I shouldn’t be allowed to order the salmon at my favorite restaurant. Refusing to kill food animals is the great omnivore hypocrisy. I’ve decided if I’m going to eat meat, I should occasionally hunt or fish. It makes me appreciate the life, the meat, and the meal in a way that buying it packaged at the store cannot.

The Alaska wild isn’t big. It crushes you with its immensity. There are starfish, squid, jellyfish, otters, whales, fish everywhere. Majesty isn’t ordained here, it’s merely born. I am a little man in a boat. We are little people in boats, bobbing helplessly in the lullaby of a deadly stretch of ocean as it sleeps. It could crush us on a whim or a wind, and yet I never feel unsafe. It does, however, make you feel small and insignificant. In a selfie world, feeling small is a new joy.

With my quick fishing success, I get cocky. I am Ahab, minus the failure. Instead of standing at attention and freaking out when a fish gets on my line, I decide to sit on the edge of the boat and reel it in casually, as if I’m playing a love song on an acoustic guitar.

"STAND UP AND FIGHT YOUR FISH!" Dennis yells.

We catch fish at a shocking rate during our stay. We almost tire of reeling them in. I barely have time to drink beer, which really disrupts my definition of fishing.

Fishing boat camaraderie is powerful. There are no distractions except the water and another human’s face. Feeling small and vulnerable uncorks the real in everyone. Spending a day on an Alaskan fishing boat is like spending a year in love.

SBFC has the best fishing boats. I don’t know what makes a boat the best, but my great friend Scott, a boat person who came with me on this journey, says they are. There are shock absorbers in the seats, and a heated cabin. There’s a toilet that’s not a bucket, which is reportedly an insane luxury.

At one point, Dennis brings out something that looks like a white rubber, um, well, sex toy, attached to a fishing pole. He tells me that if I drop it to the ocean floor and jerk on the pole, I’ll catch a fish. I doubt him. I do it anyway, and catch a halibut immediately. Never doubt Dennis. Fish fear him, and probably intuit his presence like dogs can hear when a mail carrier brews their morning coffee.

It makes me realize how easy this all is. Dennis finds fish on his sonar, hooks our bait, tells us exactly how many yards to drop our line (there’s a depth counter on each rod), and we just haul up pure, immaculate Alaskan catch. He gaffs them, takes them off the hook, puts fresh bait on our hook, and tells us to drop again.

I feel bad about this, as if I’m not doing enough to learn the dirty parts of a sacred art. But hooking a king salmon (and halibut—and red snapper, black sea bass, lingcod, coho, and dogfish) and reeling it in is the fun part. I like fun parts. Plus, I didn’t come all the way to Alaska to have fish mock my bait setup, or to spend too much time cursing.

And Steamboat Bay isn’t cheap. At one point, Scott, who’s not made of money and is in the midst of a career change, calls his wife.

"Should we start saving for next year?" she asks.

Lucky for them, this place books a year in advance.

The night before we have to leave (on a seaplane that lands at our front door), five of us kayak into Steamboat Bay at sunset. The water is pure glass, religiously still. Jellyfish of all sizes and technicolors float and pulse below us. An otter peeks its head up, then a baby sea lion. The horizon turns a savage orange, pure arson in the sky. I haven’t been humbled and silenced by nature in this way for far too long. It alters me, resets a few core priorities in life.

Morning after, the SBFC staff loads our luggage, including 45 pounds of fish, filleted and vacuum sealed, then frozen and packed in a neat box. I’m currently storing our haul in three friends’ freezers in San Diego.

It’s a bucket-list trip. But I increased my lifetime fishing success rate by 6,000 percent. I bobbed in the immense, surreal Alaskan wild, and drank quality wine and shared stories by a fire. And I will be eating Alaskan seafood that I caught, my suburban self, into the next year.