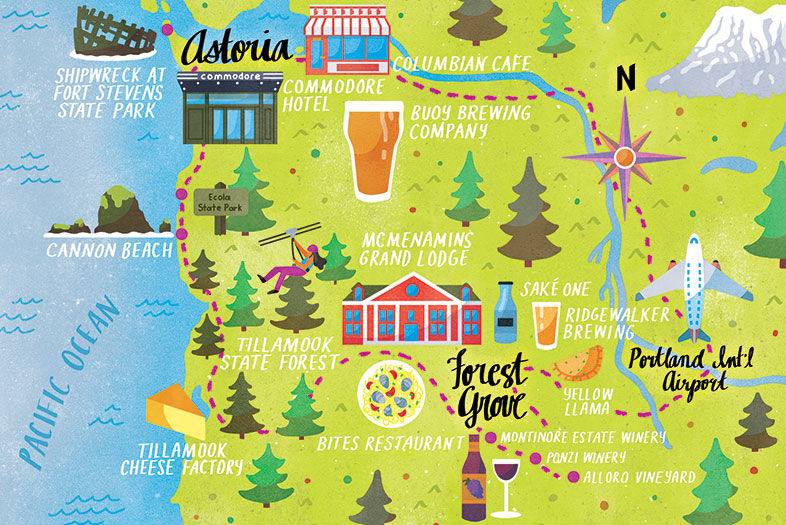 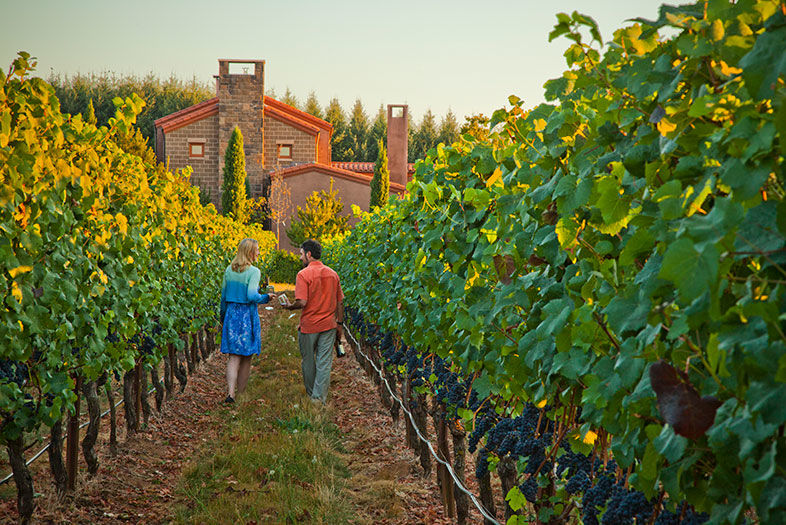 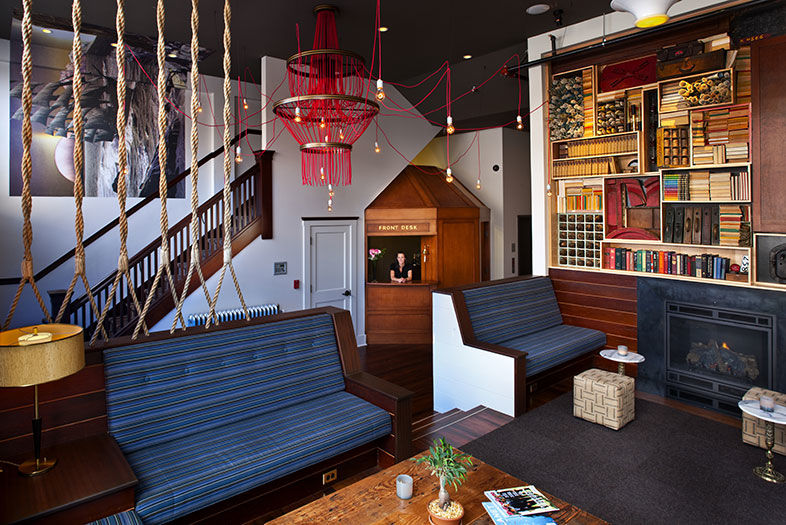 Landing at Portland International Airport, seeing the familiar geometric teal carpet and jumping in the car only to head straight out of the dynamic city felt, truthfully, a little rebellious, but I had other things in mind. Specifically: evergreens for days, dramatic coastlines, cooler weather, and as much pinot noir as I could handle. I was road trip bound, with a plan to snake through the Tualatin Valley, Tillamook State Forest, Columbia River towns, and northern Oregon’s Pacific coast.

The first stop was the college town of Forest Grove, approximately 45 minutes due west of PDX in the Tualatin Valley. I checked into McMenamins Grand Lodge, a former Masonic Lodge that was turned into a European-style camp for grown-ups with shared bathrooms, a soaking pool, artist-themed rooms, and several lively bars hidden throughout.

Within 30 minutes of McMenamins are several first-class wineries. This is pinot noir country, though the region also produces quality riesling, chardonnay, and pinot gris. Ponzi is one of the pioneers of pinot noir in Oregon and has provided the wine for many White House state dinners. Alloro also has award-winning pinot, served in a Tuscan-style winery overlooking the Chehalem Mountains. Montinore is a favorite among natural wine enthusiasts, with 230 acres of biodynamically farmed pinot and a suite of whites.

Downtown Forest Grove is worth exploring, too, with a lively center that will give any nostalgic Southern Californian a good dose of Americana. I visited Ridgewalker Brewing and Bull Run Cider to whet my palate before two dinners: one at Bites Restaurant, where the linguine with clams and miso is a revelation alongside Saké One’s local brew; and the other at Yellow Llama, a Peruvian home cookery.

Heading northwest on a 75-minute drive through the Oregon Coast Range and the Tillamook Forest deposited me at Cannon Beach—arguably the single-most-Instagrammed location in Oregon (though the PDX carpet is up there). With boulders rising out of the waves, tree-covered mountains, and jagged cliffs cascading right into the ocean, this is the Northern Pacific at its finest. I’m told that Oregonians don’t go to the ocean to sunbathe or swim, but rather to bundle up and bask in nature’s grandeur.

Instead of immediately driving north, I spent the afternoon heading south on the 101, which closely hugs the coast. After sampling Tillamook cheddar and stopping to take in the sensational vistas at Cape Lookout State Park, I headed north, making sure to catch the unmissable Ecola State Park on my way up the coast.

On the way to Astoria, I turned off into Fort Stevens Park to glimpse the wreck of the Peter Iredale, which ran aground in 1906. Astoria is a seafaring town at the mouth of the Columbia River, living and dying by the whims of maritime commerce. Being just two hours from Portland, with a little grit and an eternally cute downtown, means it’s also a hipster magnet. This is a good thing, because hipsters bring inexpensive, stylish hotels, solid craft beers, and good food. I stayed at the Commodore Hotel, a nautical-themed spot that would satisfy any Wes Anderson fan. Just around the corner, Buoy Beer Company was a worthy stop with a stellar Czech pilsner and IPA alongside a menu chock-full of locally sourced seafood.

After a cozy night’s sleep in concert with some authentic Pacific Northwest rainfall, I bundled up in the cool, cloudy morning and ate breakfast at Columbian Cafe. I chose one of the specials: a soft scramble with kale, tomatoes, and feta over laced potatoes. Satisfied, rejuvenated, and just a little bit melancholy, I jumped into the car and began the drive back to reality, savoring the last of small-town Oregon’s sensory wonders.