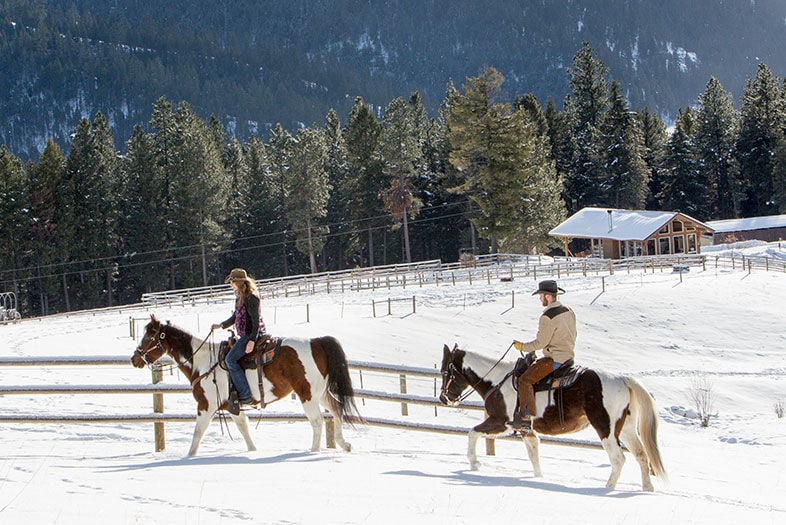 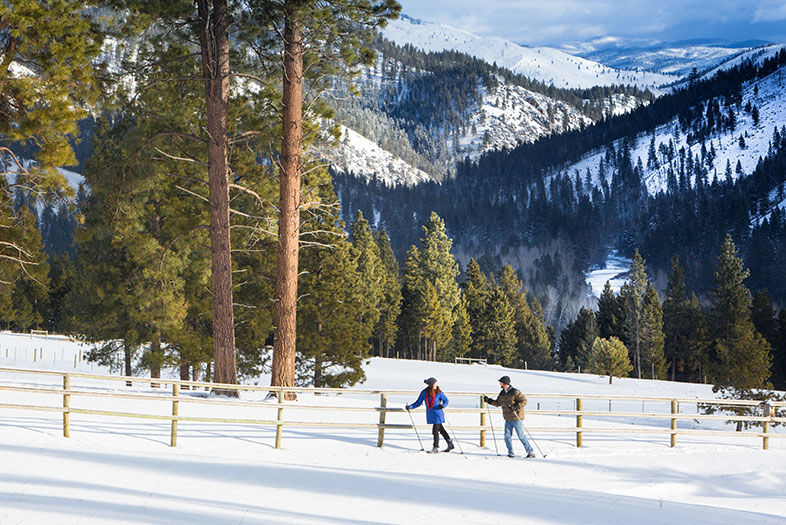 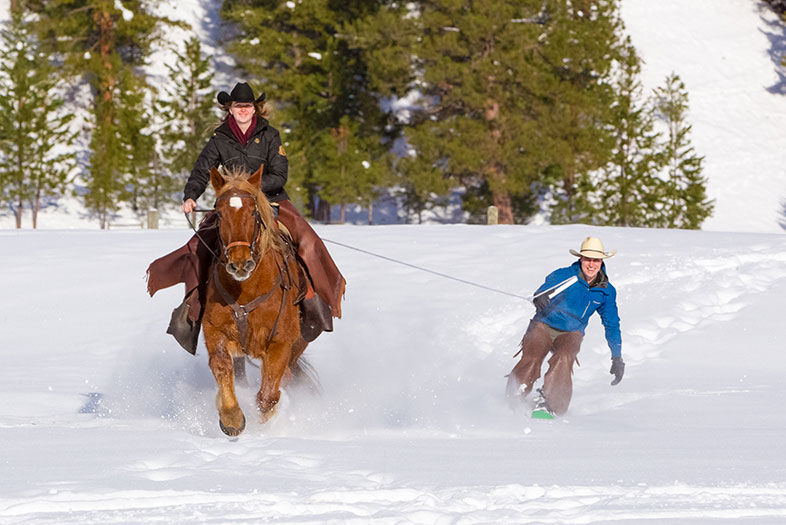 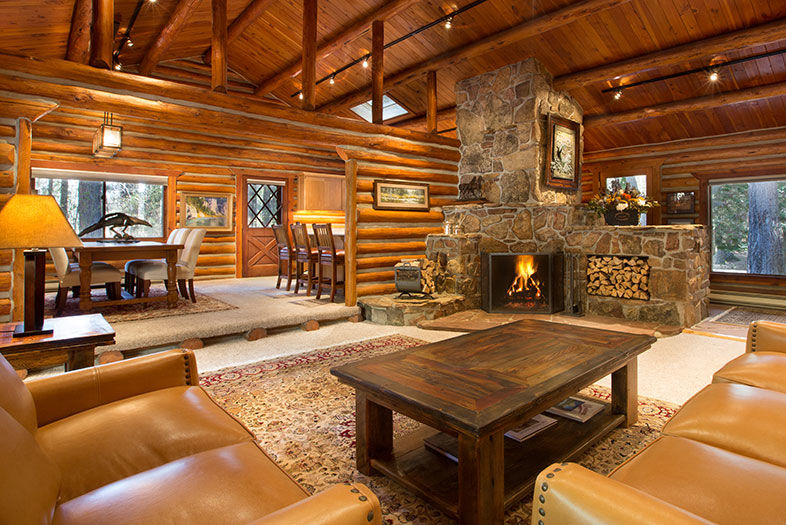 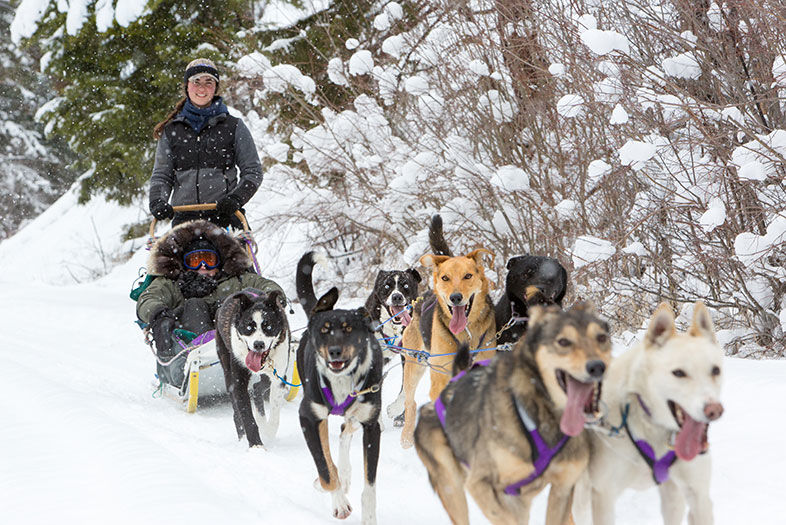 Legends of the Fall by Jim Harrison

I come from a family of Montana-philes. My brother went to school in Bozeman, voraciously skied its back bowls, and married a local girl. My father fished its mighty rivers, hooking many a rainbow and brown trout over his lifetime, and spent his final adventure on earth at the edge of the Gallatin River under that Big Sky. My mother and I passed wintry afternoons cross-country skiing through forests of snow-laced ponderosa pines—the silence and ethereal beauty its own kind of church. Raised by my father’s "adversity breeds character" philosophy, we were first-on-the-chair alpine skiers, chasing powder and fresh tracks. Winter meant skiing and simply that. But when I spent a snowy weekend last March at Triple Creek Ranch in Darby, Montana, I ditched my downhills and discovered a whole new world of winter recreation and Western-style fun.

Set on 800 acres at the foot of Trapper Peak in the Bitterroot Mountains, some 75 miles south of Missoula, Triple Creek Ranch is a snowglobe paradise, one where rustic Americana meets unfussy refinement. Yes, it’s a Relais & Châteaux property, indulgent in every way, but the general manager wears jeans and you won’t catch a whiff of pretense anywhere on site. It’s the kind of resort where, if the owners Barbara and Craig Barrett (former ambassador to Finland and former CEO of Intel, respectively) are in residence, they’ll invite you for cocktails at their private ranch, Elk Meadow, so you can take in their amazing Western art collection (hello, Frederic Remington and C. M. Russell) while sipping a Huckleberry Lemonade Drop and nibbling on roasted quail and pineapple salsa canapés. Checking in to your private log cabin (one of 25 in all) feels more like arriving at a family friend’s home than a resort. They’re spacious (up to 3,600 square feet) and ridiculously well appointed with log post beds, roaring fireplaces, Western art, private hot tubs, Pendleton blankets, freshly baked cookies, and more.

Don’t get too cozy just yet, though. This is Big Sky Country, after all, and the outdoors beckon. In the springtime that means nature safaris, hikes, golfing, and fly fishing, but until February or March, the lineup is fully powder-centric.

Skijoring is a combined rush of snow and water skiing without the hassle of trying to stand up.

Unless you’re Scandinavian or grew up in sleepy Wisdom, Montana (population 100), you probably haven’t heard of skijoring ("ski driving" in Norwegian). Neither had I. This sport involves you, a pair of short, fat skis, a rope, and a mounted quarter horse that takes off, pulling you through a snowy meadow. It’s a combined rush of snow and water skiing without the hassle of trying to stand up. It’s also a competitive sport with rodeo-style events involving jumps, gates, and ring grabs while being pulled at full speed by a steed. If you’re at Triple Creek the last weekend of February, they’ll take you on a field trip to Wisdom, an hour’s drive away, to watch the action.

Equally exhilarating is the resort’s dogsledding experience, where I mushed a team of six adorable Alaskan sled dogs and found myself giggling uncontrollably as we took a few loops around the snow-packed course. Anyone feeling a little apprehensive can also ride as a passenger with a well-trained musher, but I suggest taking the reins and going on a heart- thumping solo ride.

Admittedly, I am not a confident cowgirl, and those clever creatures are onto me, sniffing out my trepidation a mile away. But the ranch has 60 handsome, well-trained horses, so I saddled up and discovered the romance and poetry of a trail ride in a winter wonderland. I also found time to snowshoe, snowmobile, and cross-country ski. But there are more next-level adventures, like riding through the forested landscape on fat-tire mountain bikes equipped for snow; ice fishing for trout; and carving turns at Lost Trail Powder Mountain, whose empty slopes sit on the Continental Divide, so you can ski Montana and Idaho on the same day, same run.

But the resort wins the most points for one of its more unique activities: sapphire panning. You can spend hours sifting through gravel from the local mining company in search of these raw blue, pink, green, and orange stones, which look like sea glass in their rough state. And yes, the rumor is true—one couple took home a record 200, which explains the aptly named Sapphire Mountains nearby, and the fact that Montana is known as the Treasure State.

After all that hard playing, it’s time to eat. Triple Creek’s chef, Jacob Leatherman, cooks rustic, hearty locally sourced cuisine, like roasted antelope loin with Brie grits, Snake River Farms pork collar with a garlic scallion rub, and Durham Ranch Wagyu beef with caramelized fennel home fries. Afterward, you’re free to grab wine, craft beer, or spirits from the Rooftop Lounge and then squirrel away to your cabin for a nightcap and hot soak under the stars. The resort is all-inclusive, so tell your inner spending police to take a nap.