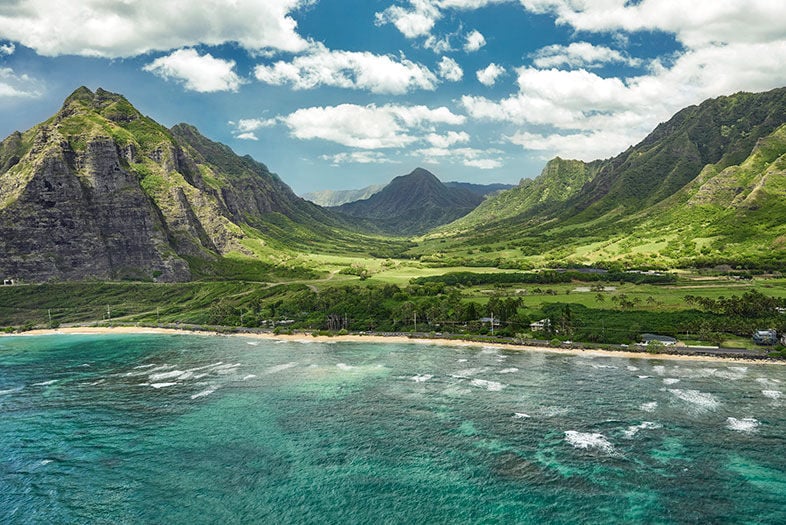 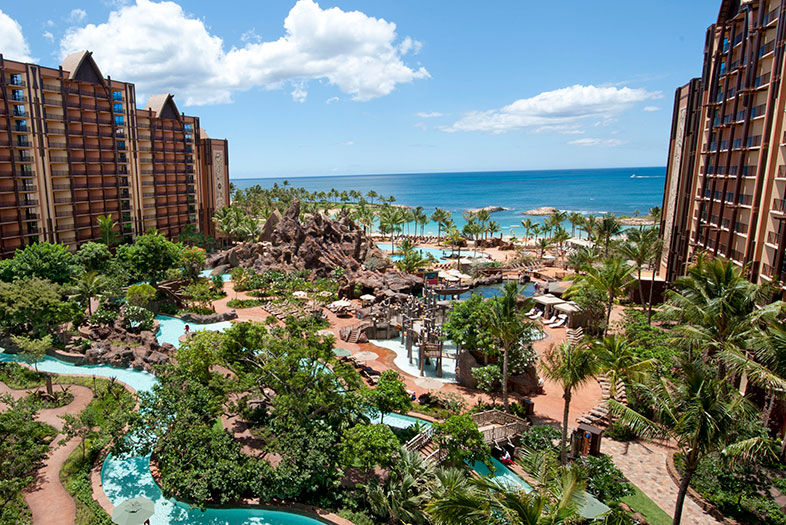 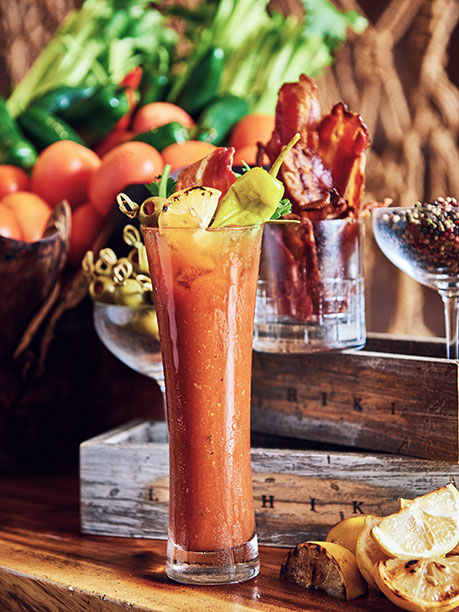 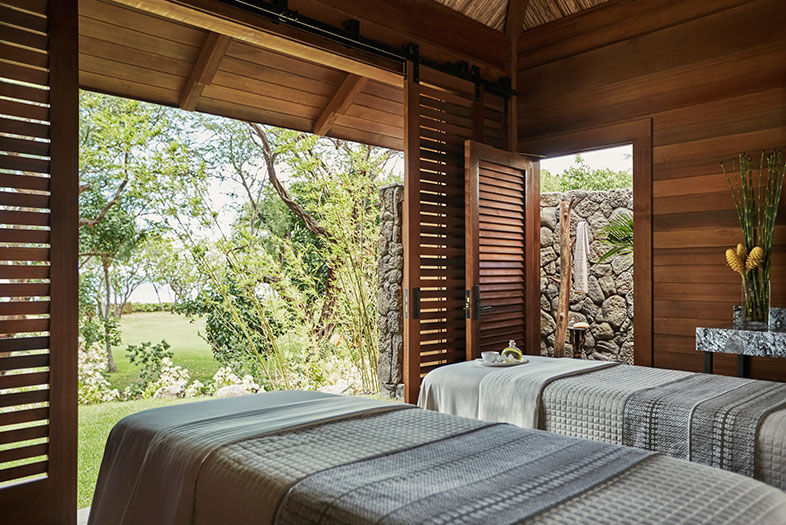 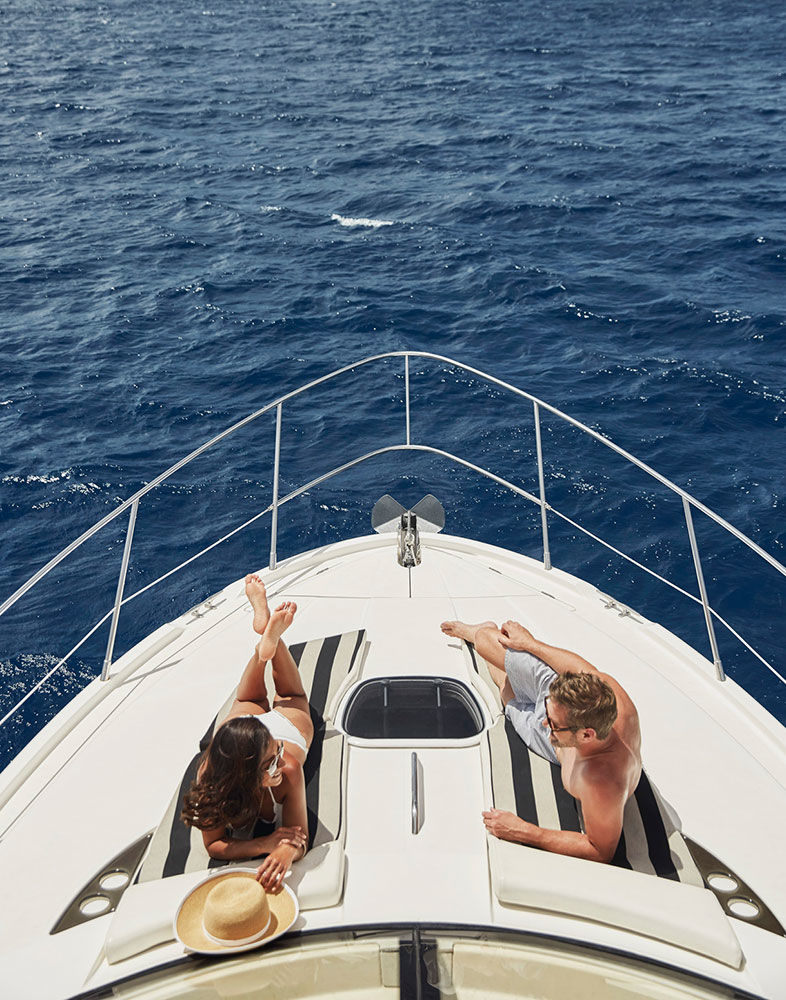 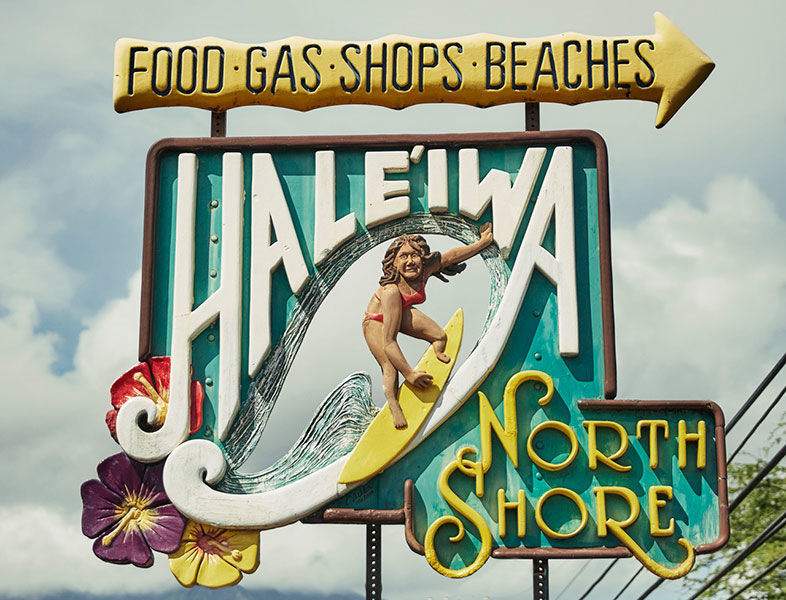 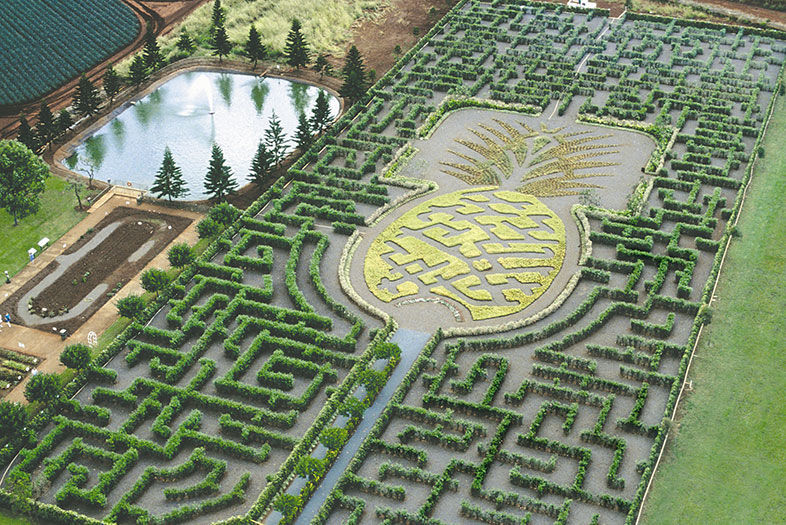 The brand-new Four Seasons O‘ahu at Ko Olina opened in 2017 after a $250 million overhaul. The property has 370 rooms and suites, panoramic ocean views, and a white, airy design with colorful work by local artists, surrounded by tropical landscapes, waterfalls, and koi ponds. The service is impeccable and immediate. Even the sunscreen is five-star (they have Sun Bum on tap at all the pools). Room rates start at $625 per night.

Right next door stands Aulani. The Disney resort and spa is a few years older than its neighbor, but what it may lack in brand-new luxury, it makes up for in imagination and family fun. If you’re traveling with your keiki, the five waterslides, 900-foot-long lazy river, and O‘ahu’s only private snorkeling lagoon in Waikolohe Valley will keep the little ones entertained for days on end. The property was thoughtfully designed by Disney Imagineer Joe Rohde, who paid careful attention to the cultural details. It also houses one of the world’s largest collections of contemporary Native Hawaiian art. Aulani’s spacious one-, two-, and three-bedroom villas have kitchens, which make traveling with families easier and more affordable. There’s also a Costco less than 10 minutes away in the nearby town of Kapolei. Room rates start at $484.

Dining options are limited to the resorts and a little shopping center across the street. The newest restaurant is Mina’s Fish House, which reopened at the Four Seasons last month under the direction of award-winning chef Michael Mina, following the success of his new concept in Waikiki, The Street. Standouts of the seafood-centric menu include the Louie salad, seared Hawaiian snapper, and poke—done right, without all the mainland fuss. Also at the Four Seasons is the Southern Italian restaurant Noe. All the pasta is made in-house. Try the baked paccheri, described as a deconstructed lasagna.

Equally decadent is the famed Sunday brunch at La Hiki Kitchen, rumored to be the best on the island, with poke and seafood stations, a DIY bloody mary bar, and more. On Friday to Tuesday from 5 to 6 p.m., La Hiki also offers a Shake It Up happy hour with a $20 hamburger and milkshake special. At the shopping center across the street, the casual Monkeypod Kitchen offers craft beer on tap, regional Hawaiian cuisine, and nightly live music.

At Aulani, Laniwai is the only spa in the world designed by a Disney Imagineer, featuring Kula Wai, a 5,000-square-foot hydrotherapy garden with vitality baths, soaking tubs, and six waterfall rain showers designed to boost the immune system and increase circulation. The signature lomilomi massage is outstanding, with great care taken to ensure a relaxing and truly Hawaiian experience.

From stand-up paddleboarding to kayaking to boat charters, water activities abound at the white sandy beach shared by the two resorts. The protected cove has calm water, which means no surfing, but it’s perfect for younger children. Guests can also easily walk to one of the less-trafficked turquoise lagoons nearby, ideal for sea turtle sightings and snorkeling. The Four Seasons has three pools: a serenity, a family, and an adults-only infinity-edge. The latter faces west and is "the" place to be during sunset, offering deluxe cabanas for rent that come with a high-roller suite of amenities. Find the perfect outfit for a dip or dinner at the resort’s designer boutique Caprice, which boasts two Missoni-fabric dressing rooms.

One of the resort’s more unique elements is its #FSWayfinders series, which allows guests to experience the ancient arts and culture of Hawai‘i, Four Seasons–style. These are not the hokey hula lessons held at other hotels. They are authentic, intimate experiences. Favorites include Ni‘ihau jewelry making with Ha‘aheo Hawaiian Crafts, hula lessons with the award-winning La’akea Perry, and weaving workshop with lauhala artisan Aloma Wang—who makes woven bracelets and clutches stylish enough for everyday wear on the mainland. While most experiences are free, some classes, like jewelry making, require a small fee.

At Aulani, it’s all about the pool, but there are also character sightings and interactions, including fireside story time with Disney’s newest super-popular princess, Moana. The property’s Ka Wa‘a luau takes guests on a journey through Hawaiian history, with incredible dancing, music, and food.

Both resorts offer free childcare programs for ages three and up. At Aulani, Aunty’s Beach House has closets full of princess dresses, an arsenal of Disney movies, and a playground. At Four Seasons, the Kids For All Seasons program offers canoe lessons, kid yoga, and more. Although it may seem weird to schlep the littles all the way to Hawai‘i and then drop them off with strangers, these programs can be a lifesaver for parents who prefer to dine without the screaming, spaghetti-flinging, and excessive electronics usage.

A Day Trip to the North Shore

There is plenty to see and do right in Ko Olina, and everything is walkable. But wheels can give visitors a chance to explore beyond the resorts, including a trip to O‘ahu’s famous North Shore. Rent a car at the airport, or pimp your ride with Four Seasons’ Tesla Drive and Delight amenity, which allows guests staying in specialty suites to borrow a Tesla for up to 48 hours free of charge.

Known for its big waves, hikes, and shrimp food trucks, the North Shore is a 45-to-60-minute drive from Ko Olina.

On the way there or back, stop at the Dole Plantation, which is about halfway between Ko Olina and the North Shore. It’s a major tourist destination. (Read: long lines.) But the creamy Dole whip is worth it. The plantation also lays claim to the world’s largest maze.

Another worthy stop is the town of Hale‘iwa. Its cute main drag of restaurants and shops includes Hale‘iwa Beach House, which has surf ’n’ turf and great ocean views, and Polu Gallery, selling local artwork.

Spend the rest of the day pulling off the road at points of interest and swimming at the North Shore’s famed beaches, such as Waimea Bay Beach Park, Banzai Pipeline, Sunset Beach, and Turtle Bay. (Depending on surf conditions, the waves can be exceedingly powerful, much more so than in San Diego. Swim with caution.)

The route also has fun hikes, like the two-mile botanical garden hike to a waterfall in Waimea Valley.

The best places to grab a bite are at some of the area’s food trucks. Just past Turtle Bay in Kahuku are the original Romy’s and Giovanni’s food trucks, beloved for their shrimp plate lunches sourced from sustainable, privately owned farms. For dessert, try Wili Wili’s Shave Ice Haven, also in Kahuku, or Ted’s Bakery at Sunset Beach, which has delicious cinnamon rolls and pies. Aloha!