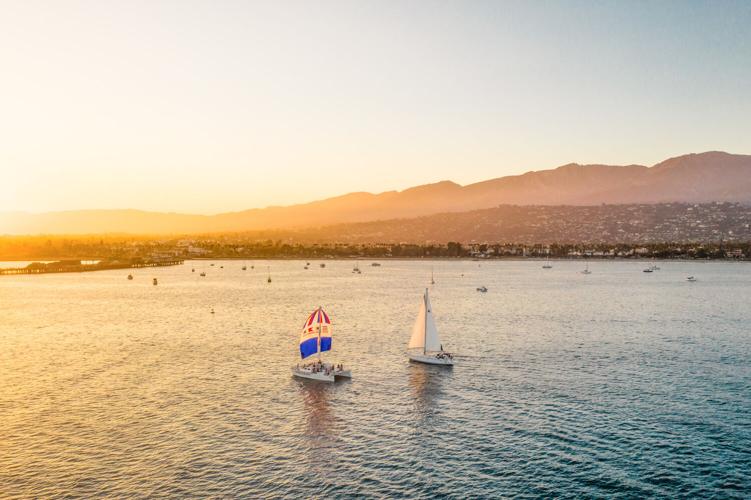 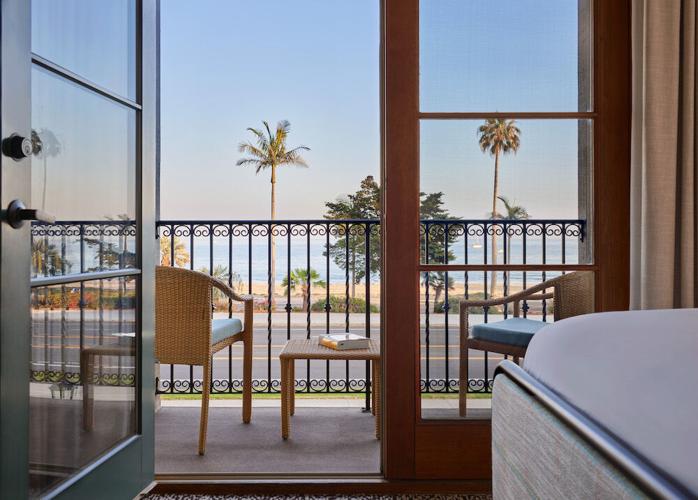 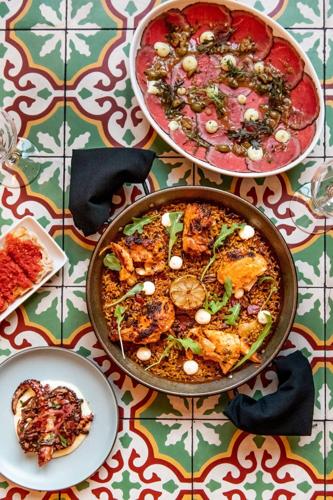 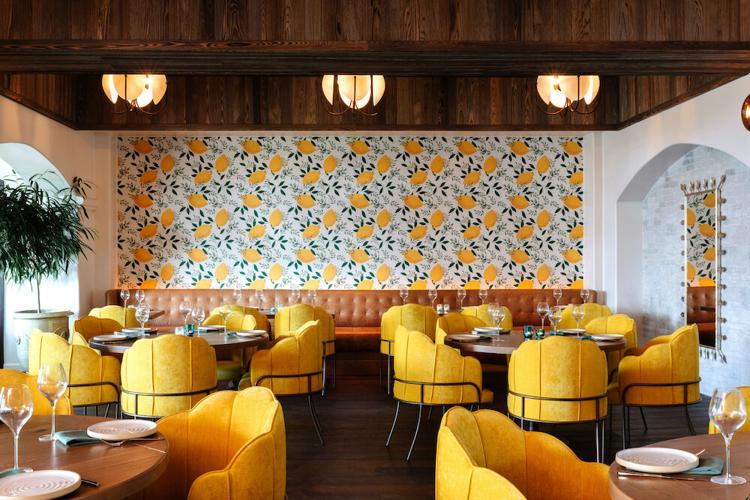 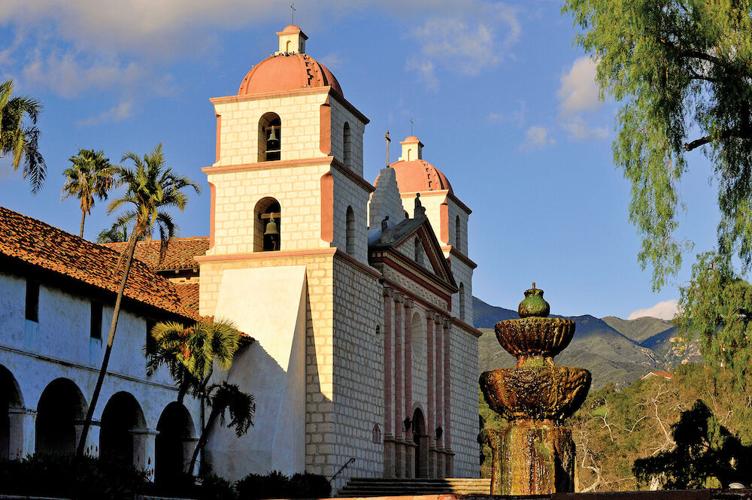 Check into the Mar Monte Hotel, which is right across from scenic East Beach and Cabrillo Pavilion, the city’s nearly century-old oceanfront events venue, for a relaxing seaside retreat. Mar Monte was recently renovated and is now a Hyatt property, yet it has the feel of a cozy beachside condo instead of a corporate hotel. It’s also in a peaceful location that’s close to the restaurants, bars, and shops on State Street. Book one of the oceanfront rooms with a balcony to let the sea breeze in, and you’re welcome to bring your dog along on your getaway (with a deposit). Over by West Beach, the Hotel Californian is a staple for its Spanish Revival architecture, rooftop pool, and Moroccan-inspired spa, Majorelle. If you’d rather be downtown, Kimpton Canary is a couple blocks from the Santa Barbara Museum of Art and steps away from restaurants and bars.

The restaurant scene here is big on farm-to-table since Santa Barbara County has more than 1,400 farms, and you’ll find that even casual eateries serve top-notch wines by the glass—no surprise since the region is also famous for its vineyards and was immortalized in the film Sideways. State Street, the city’s main artery, is the place to get your bearings and start exploring. As an added bonus, a ten-block section of it is closed to vehicular traffic. The downtown district is packed with open-air dining, craft breweries, and lounges, and there’s a farmers’ market every Tuesday afternoon.

Start at D’Angelo Bakery on East Gutierrez Street with an espresso and one of a dozen egg dishes, like the smoked salmon Benedict or huevos rancheros, then stroll north toward the end of the promenade at East Sola Street. For lunch and dinner, popular spots include State & Fig for California cuisine and wine, Santa Barbara Craft Ramen for comforting noodle soups, and Bibi Ji for contemporary Indian cuisine. Bouchon Santa Barbara has been a neighborhood staple for over 20 years, serving French bistro fare in an inviting atmosphere. If you want to splurge, arrange to tour the farmers’ market with chef Greg Murphy, then sit down to a three-course dinner with wine pairings.

Seafood lovers will find plenty of options at Santa Barbara Shellfish Company, a casual shack perched on Stearns Wharf, the oldest working wharf in California and one of the city’s most visited landmarks. You can drive over the wharf’s wooden planks and park near the restaurant, then dig into clam chowder, oyster shooters, and local rock crab and spiny lobster when they’re in season. Loquita is a popular restaurant that was just added to the California Michelin guide this August: Their tapas, three styles of paella, and unique gin and tonics will transport you to Spain. Don’t skip the crispy patatas bravas and beef carpaccio, and book ahead in advance since tables fill up quickly.

One of the newer eateries in town is Costa Restaurant at Mar Monte, where chef Nathan Lingle is cooking up flavorful Mediterranean dishes with California influences. Get several plates to share, such as the housemade sourdough flatbread with muhammara (red bell pepper dip), lamb scaloppine with mint salad and charred feta, and one of the seasonal crudos with fish from the local market (and save room for the California olive oil cake for dessert). For something casual, hit up East Beach Tacos for grilled shrimp and báhn mì (pulled pork) tacos, and La Super-Rica, which was noted to be one of Julia Child’s favorite restaurants. Want a meal fit for royalty? One of the few places where Prince Harry and Meghan Markle have been sighted since they moved to the area is Lucky’s Steakhouse in nearby Montecito.

You can get a good sample of the area’s wines without leaving the city by heading to the Funk Zone, a neighborhood made up of former warehouses that have been converted into boutique tasting rooms, galleries, and shops—it’s easy to sip your way through more than a dozen tasting rooms while enjoying art installations and murals. A good first stop is Santa Barbara Wine Collective, which offers flights of different varietals from a handful of local vineyards. Head to the patio at Paradise Springs Winery for a charcuterie plate and a glass of their Pink Ash rosé, which was developed as a fundraiser for victims of the Thomas Fire in 2017. Actor Billy Zane painted the artwork for the label. If you prefer bubbly, Riverbench specializes in flights of sparkling wines. Beer lovers don’t have to worry, as there are several taprooms in the area, like Captain Fatty’s, The Bier Garten, and Lama Dog.

Carve out some time to visit Old Mission Santa Barbara, a national historic landmark that’s been nicknamed “the queen of missions” in California. It dates back to 1786 and is the only mission in the state that’s been under the care of Franciscan friars ever since its founding. It hosts services every Sunday and is home to a museum and a picturesque rose garden and park. Admire the artwork in the chapel, then take a pause in the central courtyard’s cemetery to look for the plaque dedicated to Juana Maria. Juana Maria was the last surviving member of the Nicoleño tribe, and in 1853 she was found living alone on San Nicolas Island and brought to the mission—her life story inspired Scott O’Dell’s novel Island of the Blue Dolphins.

A courthouse may not typically make the cut on a vacation itinerary, but the Santa Barbara County Courthouse in downtown’s El Pueblo Viejo district is worth a stop. Its 1920s Spanish-Moorish architecture, murals, and sunken garden make for a photogenic wedding and event venue, and you can ride an elevator to the top of the 85-foot clock tower for a photo op.

If you’re a fan of spa treatments and salt lamps, you may want to check out Salt Cave Santa Barbara. At street level, it’s a small boutique that sells body scrubs, bath salts, and lotions, but below it houses what’s claimed to be the largest underground salt cave in North America. Book a session to rest your legs in a zero-gravity chair right in the salt cave, or sign up for a traditional massage or facial.

Complete your tour of the American Riviera with a leisurely sunset sail. Santa Barbara Sailing Center offers a daily two-hour cruise that gives you a clear view of the city and the Santa Ynez mountains. They also have two-day (or even longer) excursions to Channel Islands National Park and Marine Sanctuary, or stand-up paddleboards or kayaks for hourly and daily rentals so you can explore the harbor on your own Santa Barbara is relaxing year-round, but now through spring is an even better time to visit to escape the crowds.