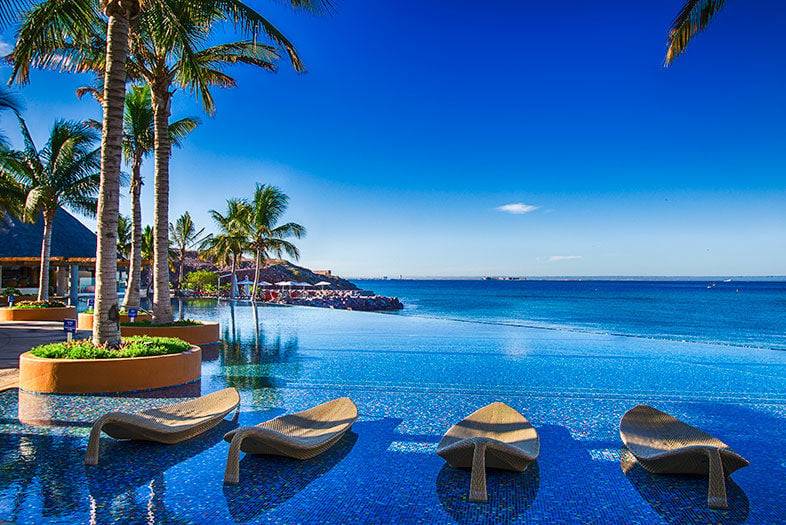 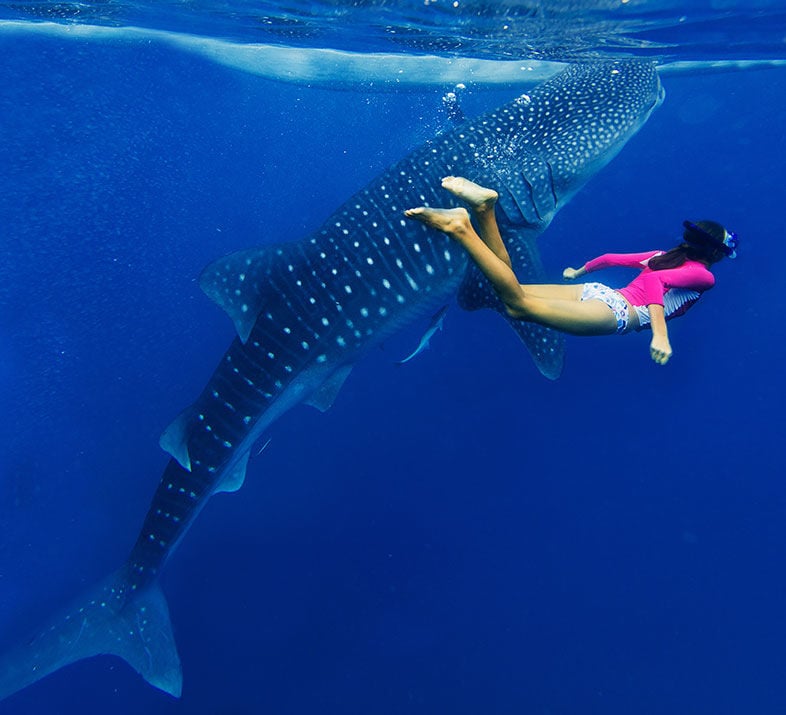 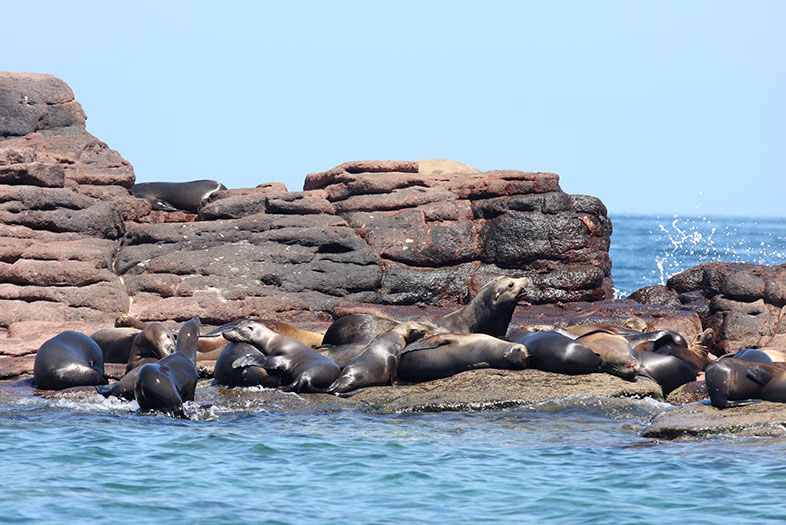 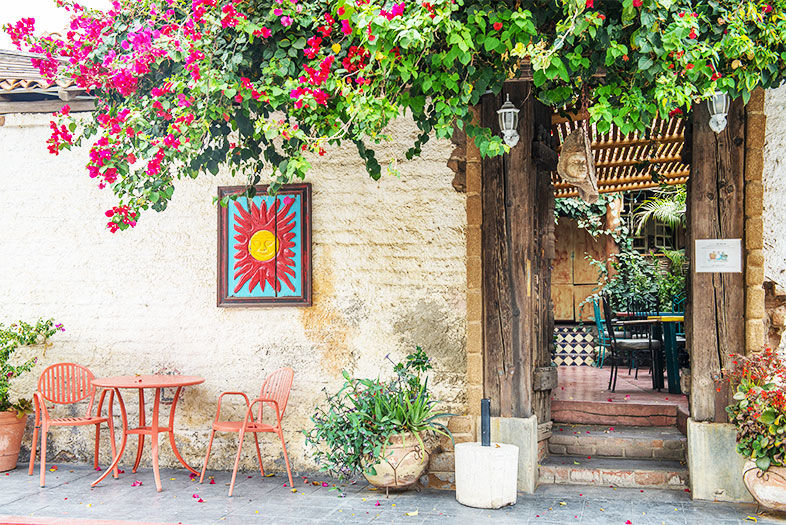 If Cabo is LA, La Paz is San Diego—Baja Sur’s less-flashy, nature-loving sister (even though it has a higher population than Cabo, at 250,000). Take advantage of the cheap nonstop flights from Tijuana International Airport. Drive or take a rideshare down to the Cross Border Xpress (take I-5 south to 905 east, then exit Britannia Boulevard and follow the signs to CBX; once inside, purchase $30 round-trip tickets through a kiosk to take the pedestrian bridge over the border to the airport). The flight to La Paz is an easy two hours and you can walk onto the plane with a $2 Tecate. Once you’ve landed, a taxi will take you through town to CostaBaja Resort & Spa on a lovely marina. Be sure to ask for a room with an ocean view when booking—perfect for watching the sunset and later, stargazing.

Treat yourself to a massage early in the trip (before the sunburns!) at the hotel’s holistic Espíritu Spa, where every therapist is a reiki master. Prefer your R&R with a dose of vitamin D? Chill at the pool’s swim-up bar for a pre-dinner marg.

Dine at the resort restaurant Steinbeck’s, named for the American author, who was inspired to write The Pearl after a visit to La Paz. Over 400 tequilas are in stock, but we recommend pairing a Casa Magoni chardonnay from Valle de Guadalupe with fresh yellowtail cooked to perfection by chef Alejandro Villagómez. Finish it off with arroz con leche (rice pudding).

Jacques Cousteau once called the Sea of Cortez the "aquarium of the world." Perhaps that’s why La Paz has the most scientists per capita in Mexico. Translation: wildlife abounds. Less than five minutes from the hotel, located next to the governor’s house, is the Cortez Club, which takes snorkelers and divers on an hourlong boat trip to Isla EspíritU Santo. The final destination is an extremely large colony of California sea lions you can swim with, and they are friendlier (and friskier) than other sea lion populations. The Cortez Club guides will tell you they’re the "dogs of the sea"—in a good way—and it’s okay to pet one (with a closed fist, to protect your fingers). Speaking of little bites, the trip includes a premade lunch, plus all the equipment you’ll need.

Keep the wetsuit, snorkel, fins, and GoPro for the big finish. Back at the Cortez Club, it’s just a 15-minute boat ride to see whale sharks. La Paz is one of the few places in the world—and maybe the most convenient—where you can actually swim beside these gentle giants (October to April). From a small boat, the captain will signal when it’s time to jump in. Suddenly a head the width of a car will appear a few feet below you. The sheer enormity of the animal—the world’s largest fish—is magical. But there’s no time to let your jaw drop. Start swimming with the shark as long as you can before it outpaces you. The trip includes three or four dives, but if the animals are hanging out and feeding vertically, you can just get in the water once and observe. Otherwise, breaststroke it is!

If you’re not an animal person, spend the day on a white-sand beach. About 20 minutes by car is Balandra Bay, a series of seven pristine beaches with shallow, clear waters, ending at El Tecolote beach. Locals were able to protect the natural area from a developer in 2006 after attracting UNESCO World Heritage recognition of its mangrove forest.

Locals typically eat lunch around 2 p.m. and dinner at 10 p.m., but restaurants accept dinner reservations earlier if you’re hungry after all that ocean play. Take a cab to Sorstis, possibly the best restaurant in town, for gourmet pizzas, steak, seafood, and live jazz music in a romantic courtyard setting.

Walk off dinner as you stroll the malecón, or boardwalk, which comes alive after sunset. Local families and tourists weave between jewelry vendors, musicians, magicians, and sidewalk diners.

In town, you’ll find myriad breakfast options. Grab cold-brew coffee at the chic Doce Cuarenta, healthy eats at Bagel Shop, or a chocolate pastry at Dulce Romero Panadería & Orgánicos. If you prefer to fuel up with protein, do as the locals do and go for fish in the morning (when it’s freshest). Places like Bismarkcito start selling fish tacos at 8 a.m.

After your meal, hit the road for a day trip to the Instagrammable little town of Todos Santos (population 30,000). Just an hour away across the peninsula, on the Pacific Ocean side, Todos Santos is a Pueblo Mágico—there are over 100 such magic towns in Mexico, a Ministry of Tourism designation that means the city’s culture is quintessentially Mexican. The scenic drive on a four-lane highway, while flat, offers views of the Sierra de la Laguna mountains in the distance. (The highest point is 7,000 feet and it’s hikeable.)

In the small downtown, explore art galleries, craft boutiques with artisanal jewelry and handwoven blankets, historical churches like the Iglesia de Nuestra SeÑora Pilar, and the hopping Hotel California (no relation to the Eagles song, sadly). For Italian food, there’s Ristorante Tre Galline, for coffee, Caffe Todos Santos, and for all-Mexican wine and generous pours, try Amor d’Vino. Another lunch option is La Casita Tapas & Wine Bar, where the menu is inspired by the chef’s world travels by yacht and the ingredients sourced from his own on-site garden. If you’d rather make Todos Santos your home base for exploring Baja Sur instead of La Paz, check out the cute boutique hotels Casa Tota, Guaycura, and Todos Santos Inn.

Back in La Paz, have dinner at Nim—it’s owned by fisherwoman Cristina Kiewek, so the catch is hers (or her boyfriend’s). Fun fact: She was also one of the first in La Paz to stop using plastic straws, a step toward the city’s goal to be the first green destination in Mexico.

For post-dinner drinks just three blocks away, drop into the stunning La Miserable for mezcal tasting. If you’re still standing afterward, nosh on street hot dogs. A warning: These dogs come with all the fatty fixins, wrapped in bacon, fried in mayonnaise, so indulge with caution—or like you’re on las vacaciones!

Diving and underwater photography (up to 100 feet visibility)