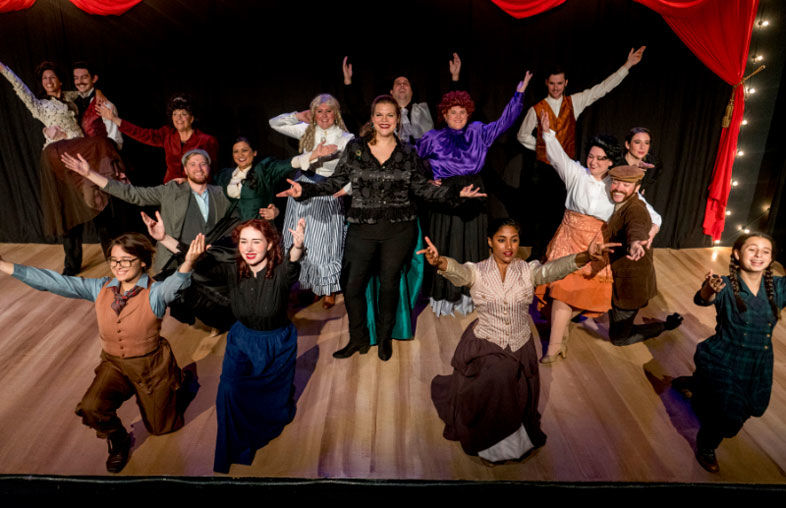 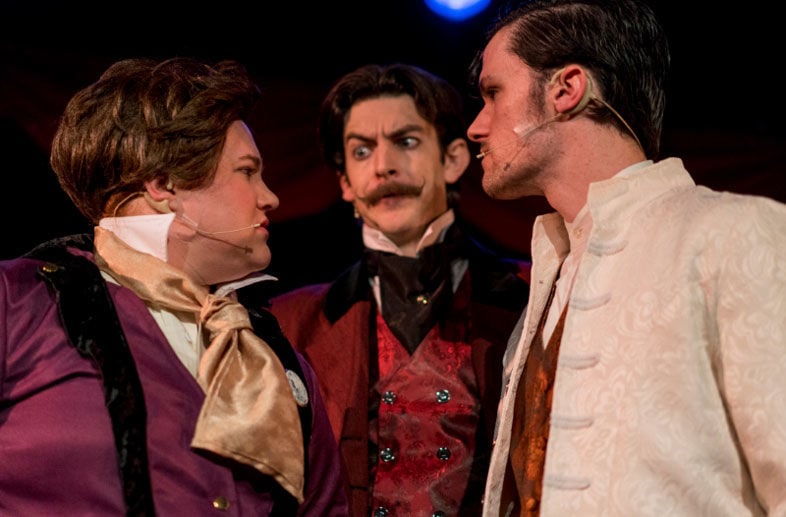 You wouldn’t take my dad for an actor. There’s not much skill overlap between flying a naval search-and-rescue helicopter and singing showtunes in a straw hat—but he loved participating in non-professional theater. When he was younger he dismissed musicals as frivolous, but he often recounts the exact moment he first "got it": At a tiny local production of The Music Man in Arlington, Virginia. The company didn’t have much space or set to work with, but they sang together so well and with such joy that it captured his imagination and opened his eyes to a whole new art form.

I imagine his experience must have been similar to the one I just had at OnStage Playhouse’s production of The Mystery of Edwin Drood. Their small space allows for just three rows of seats, crowded among some noisy bars on Chula Vista’s Third Avenue, but it was quickly filled with infectious enthusiasm. It’s a coproduction with Turning Tydes Theatre Company, and a close inspection of the program reveals the biggest secret to their success: Not only have these actors worked together in several previous shows, most of them are also pulling double duty in some capacity as crew, and their practiced, comfortable rapport and personal stakes in the show pay copious dividends.

The story was Charles Dickens’s last, left unfinished when he died—which means you, the audience, get to vote on the ending: Who was the murderer? Who was in disguise as the mysterious police investigator? And—most enjoyably and/or sadistically—which two characters should hook up? There are apparently dozens of possible permutations; it must have been a Herculean feat to rehearse them all, and it means that no two audiences will have the same experience.

You, the audience, get to vote on the ending: Who was the murderer? Who was in disguise as the mysterious police investigator? And—most enjoyably and/or sadistically—which two characters should hook up?

Don’t let the terms "show-within-a-show" and "audience participation" scare you away: The characters may chat with you beforehand and during intermission to drop a few clues and ask your opinion, but this isn’t Rocky Horror; no one’s going to drag you onstage or embarrass you. And to my immense relief, the fourth-wall-breaking is similarly gentle and infrequent; the personalities are comically exaggerated but never melodramatic.

That must be an especially tricky balancing act to pull off for the villain (or is he?), John Jasper (Tyler C. Jiles), whose Abe Lincoln frame and exceptional mustache only magnify his syrupy voice and elastic expressions. He’s the most colorful of a cast of cartoons—this is praise, I love good animation—who stay just individualized enough to avoid caricature.

They’re a crayon box of interesting faces and physicalities: There’s the cocksure, aloof dandy of a title character (Jordan Hall Campbell, also the musical director and cofounder of Turning Tydes), the bawdy opium den proprietor Princess Puffer (Kat Fitzpatrick), and the tipsy Durdles and his nearly-mute sidekick (Allen Hopkins and Hourie Klijian), who are the spitting image of the fox and the cat from Pinocchio.

The accents are all over the map, but no one would mistake this for realism. When the narrator (Georgia Ladd) has to double as the mayor, she doesn’t quite have room to do more with it than an annoying voice and pinched expression, but it’s hard to blame her when she does so well maintaining the audience’s interest and directing their attention the rest of the time. Robert Coe steals the show more than once as a winsome supporting character who’s just waiting for his big break, and Summer Blinco deploys a singularly amazing voice (classically trained, surely?) as female lead Rosa Bud.

And that music—good heavens! I was bowled over at the talent that comes together when each new song begins. Campbell has produced tight, beautiful harmonies and rousing choruses from beginning to end, and choreographer Candace Carbajal (a chorus member herself) deserves a trophy for creating such big, expressive dance numbers, sometimes with the entire cast shoulder to shoulder yet never missing a step.

The momentum that so effortlessly carries everyone through the first act begins to flag somewhat once they leave the realm of Dickens’s original to enact whatever the evening’s chosen ending will be. But regardless of the audience’s whims, the story ultimately wraps up in a satisfying way, and it’s impossible to leave the theater without a huge smile on your face. Turning Tydes is chock full of talented rising stars who shine all the brighter when put together, and I can’t wait to see what magic they work next.

The Mystery of Edwin Drood, directed by Alex Bezdeka

At OnStage Playhouse through December 8