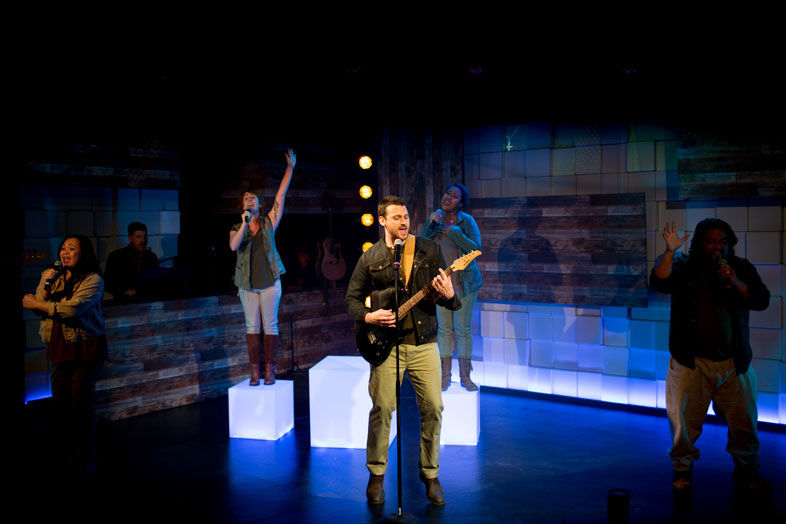 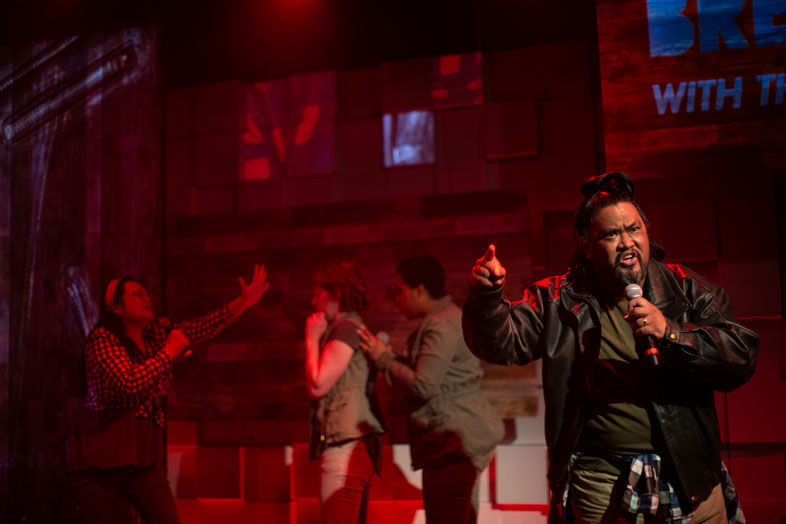 Sometimes the best way to criticize someone is just to present them accurately. There’s no need to make a strawman if they dig their own hole while speaking for themselves. Although most of South Park’s satire is absurd, its Joseph Smith and Xenu dramatizations were effective because they weren’t exaggerated—the latter even ran with an on-screen disclaimer stating "This is what Scientologists actually believe."

So it’s understandable to brace yourself when you hear that This Beautiful City is a musical about the various faith communities of Colorado Springs—headquarters of Focus on the Family and Ted Haggard’s New Life Church—and the campaign for the state’s anti-gay-marriage constitutional amendment in the run-up to the 2006 midterms. The disclaimer projected on the set before the house lights dim says it’s based on real interviews that The Civilians Theatre Company conducted with Colorado Springs residents at the time. But can Diversionary, the country’s third-oldest theater dedicated to the LGBT community, portray evangelical Christians with evenhandedness, letting any criticism arise naturally from an accurate portrayal of their own words?

Speaking with the authority of someone who was a Christian camp counselor for three years in high school, I can confirm that yes: This is the kind of naked sincerity that a praise band leader shows onstage, eyes closed, palms up, whispering to god into a microphone. This is the right amount of intense smile and white-above-the-eyes that someone gives when describing how many thousands attend their megachurch. And yes, this is a disturbingly familiar smugness blanketing the assumption that the End Times are coming and will cover the Liberal Coast in blood when Our Side Wins.

The songs sincerely capture the sound and feeling of contemporary Christian rock. I can’t deny how often my toes were tapping, even as my post-evangelical anxiety tried to protect me from the lyrics.

It creates an interesting disconnect when it comes to the music, by composer/lyricist Michael Friedman, who passed away last year and to whom this production is dedicated. The songs sincerely capture the sound and feeling of contemporary Christian rock, inviting what I assume will be a mostly-secular audience to consider the genre on its technical merits. I can’t deny how often my toes were tapping, even as my post-evangelical anxiety tried to protect me from the lyrics.

The play’s pseudodocumentary format is one I haven’t seen much of, and the monologues-from-interviews are so thoroughly fascinating I almost didn’t need the musical punctuation. All six cast members are billed only as "Ensemble" and perform an impressive variety of characters. Jasmine January spans the biggest age gap, switching from a teen in a pink-sequined cap who like, y’know, whatevers her meandering opinion of church to a gossipy senior in her Sunday best scandalized by her preacher’s coming out as gay. January’s voices and affect for each character are the most subtle and consistent. Similarly, Victor E. Chan (previously a comic castaway in La Jolla Playhouse’s awesome Miss You Like Hell) spans the biggest ideological divide, from a hipster alternative-press publisher to a charismatic exorcist (paging Paul Dano in There Will Be Blood) to a Jewish military-family patriarch with a blisteringly cathartic antidiscrimination rant.

Probably the most powerful segments come courtesy of Theo Allyn, who deploys the best stage crying I’ve ever seen and an exquisitely controlled singing voice, as a former drug addict whose life was literally saved by the church, then later as a trans woman whose city-planning career was ruined by colleague bigotry. Some of Kim Heil’s characters are less distinct and blend into one another, though she’s quite evocative as a folksy housewife who confesses to seeing actual demons in the spiritual realm. Tony Houck and Michael Cusimano have possibly the most challenging roles, juggling various faces at the same time they’re playing keyboard and guitar, respectively (Houck is also the music director), but they hit every beat. I also have to note how interesting Blake McCarty’s projection design is, turning the characters into the setting by way of little square close-ups of their wardrobe on the backdrop—tweed sleeve and a button here, pink cardigan knit there, an Air Force pin.

Because it also spends a fair amount of time with the members of a Baptist church and an independent youth church, the play avoids any reading that it’s just a vehicle to gawk at Ted Haggard’s hypocrisy (though it makes good use of the opportunity), or by extension that of evangelical Christians at large. It offers no easy conclusions, instead creating a multidimensional, complicated portrait of what it means to be a believer in a changing world and how muddy faith and power get when mixed together, elevated by some excellent performances and enriched by a propulsive soundtrack.

at Diversionary Theatre, extended through December 16