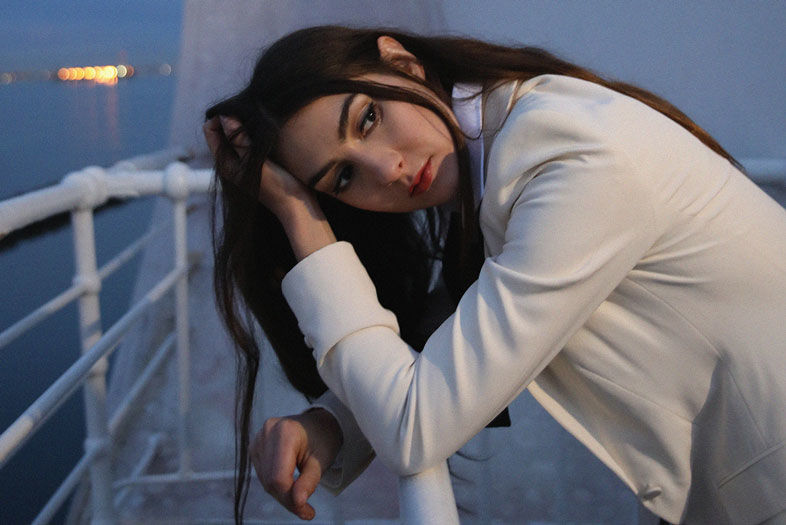 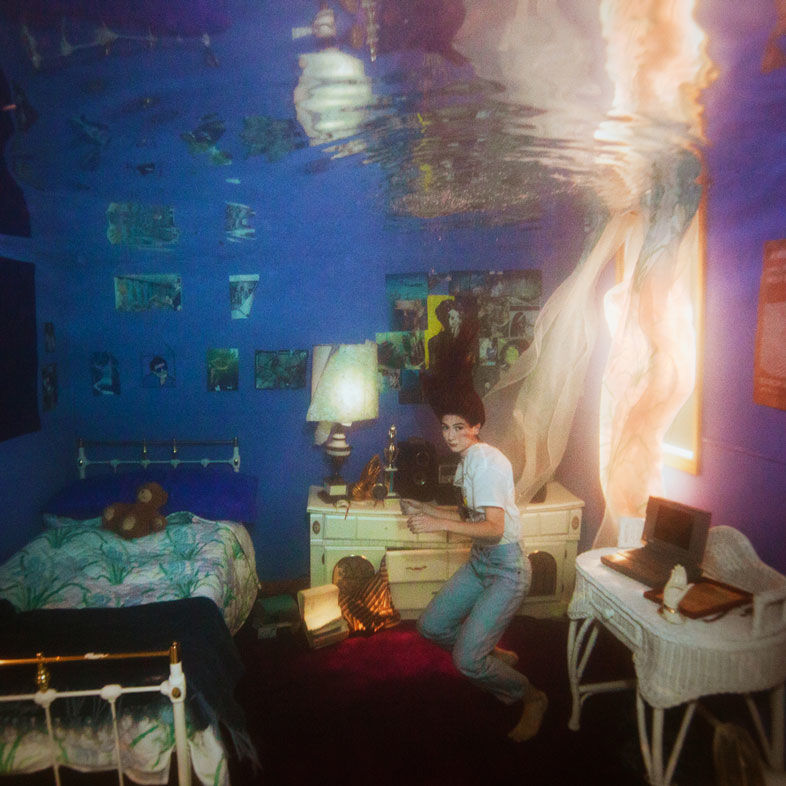 The cover of Weyes Blood’s third album, Titanic Rising, is a striking image. It depicts singer-songwriter Natalie Mering inside a bedroom that’s been entirely submerged. There are posters pasted up all over the walls, sunlight beaming through a window, even a laptop computer—a fairly outdated looking one at that—on a desk. It looks surreal and almost serene, a kind of metaphorical stand-in for being lost in cinematic escapism. There’s also a more sinister interpretation to some of the themes in Mering’s lyrics—that one day, inhabitable space on earth will itself be covered by a rising sea.

Throughout Titanic Rising, Mering examines pop culture and nostalgia’s role as a kind of sedative for the masses amid what she describes as "huge paradigm shifts." The threat of climate change, income inequality, the ironic loss of personal connections as a result of everyone being Extremely Online—it can all be a bit disillusioning to someone who spent their formative years losing themselves in films such as the one referenced in the album’s title. And it’s this idea that forms the concept behind the spacious, abstract pop single "Movies." "The movies I watched when I was a kid / The hopes and the dreams," she sings, "don’t give credit to the real things."

To create a thematic visual Mering enlisted underwater photographer Brent Stanley. The process took four days, and objects were constantly floating away from them. But the end result was an art piece that captured the essence of the beautiful and doomed ballads within.

"I think that the bedroom is this formative place for people from Western culture where they invent their own initiation into the world," she says. "And it’s a really bogus initiation, because you’re in this incubator with posters of musicians and movie stars, forming your own weird cosmology. But I’m attached to it; I’m attached to the movies and media I attributed meaning to. I don’t want to disregard it entirely, but it’s an interesting way for people to form their thoughts on reality."

True to the image on its LP sleeve, Titanic Rising is a beautiful album that’s wrapped in complicated and troubling concepts. By the standards of contemporary pop, it’s something of an outlier. Its songwriting and arrangements feel at times like spiritual successors to the ambitious art-pop records by Joni Mitchell and Van Morrison in the ’70s, whereas its lyrics speak very much to a contemporary anxiety.

The leadoff track, "A Lot’s Gonna Change," speaks volumes in its title alone. It’s a gentle introduction to the album, but its message of learning to survive in an unforgiving climate is unsettling: "If your friends and your family sadly don’t stick around / It’s high time you learned to get by." Elsewhere, on "Something to Believe," she examines how people of her generation—she’s a millennial, born in 1988—have been left drained by the weight of the world. Yet she does so in a playful way, singing, "By some strange design I got a case of the empties."

Sometimes what comes out of me is a little more Eeyore than Piglet.

"I hope that the music is soothing and the lyrics are alarming," Mering says. "I think our generation is slightly less proactive because we’re so exhausted. And it’s no surprise to me that the people doing the most about climate change right now are teenagers, who haven’t had to go out in the real world and support themselves, so they have that charisma that millennials don’t have so much because they’re just struggling to subsist. And struggling to make a living. Student debt, food, rent, health care, technology—all these things are so exponentially expensive that it’s hard to balance your energies."

It’s no coincidence that most of Titanic Rising moves at a slower pace. On past albums like 2016’s Front Row Seat to Earth, Weyes Blood proved particularly skilled at crafting lush, measured pop songs that balance darkness with humor and beauty. This album does likewise, but with an even richer palette—songs like "Mirror Forever" and "Wild Time" better showcase some of the finer subtleties and sonic details in a manner that allows the listener to absorb them. On a basic level, they simply sound great. But on a deeper level, they represent an opportunity to step away from chaos and be lost in this fluid, immersive musical world she’s created.

"I think everything else moves so fast that, emotionally for me, when something slows down is when I can really listen," she says. "I think it’s a speed you don’t hear very often. I do like upbeat stuff; I’m not trying to make everything a downer. But sometimes what comes out of me is a little more Eeyore than Piglet."

As Natalie Mering has evolved as an artist, she’s expanded broadly outward, both building up her songs into elaborate arrangements and tackling much heavier topics. She writes lullabies about the things that keep us up at night, protest songs that feel more like internal dialogues. Yes, it’s political, as much as it is personal, and Mering is thankful to have music as a weapon in her arsenal as life on earth brings about increasing challenges. Even if she still feels a certain level of guilt about not always being able to directly participate on an activist level.

"I know that ultimately it presses on my soul, what I could be doing to make more of an impact, but this is what I do naturally," she says. "And it’s, I guess, my means of survival."

Yet while Mering acknowledges that creating art can only do so much in the scheme of things, she still considers herself an optimist.

"I think humans are capable of remarkable resilience," she says. "So if reality’s gonna change even more than we imagine, and if it doesn’t happen in my lifetime, I’ll just be incredibly grateful that I got to live, no matter what."

Other Recommended Shows This Week

The Psychedelic Furs (August 6, The Observatory North Park): Everybody knows "Pretty in Pink," and probably "Love My Way," but The Psychedelic Furs have over a half dozen great post-punk albums to their name, all of which are worth exploring further.

Jeff Terich is the web editor of San Diego Magazine, and the music critic behind the blog The Setlist. His writing has been published in Stereogum, Bandcamp Daily, American Songwriter, Fodor's and Vinyl Me Please.