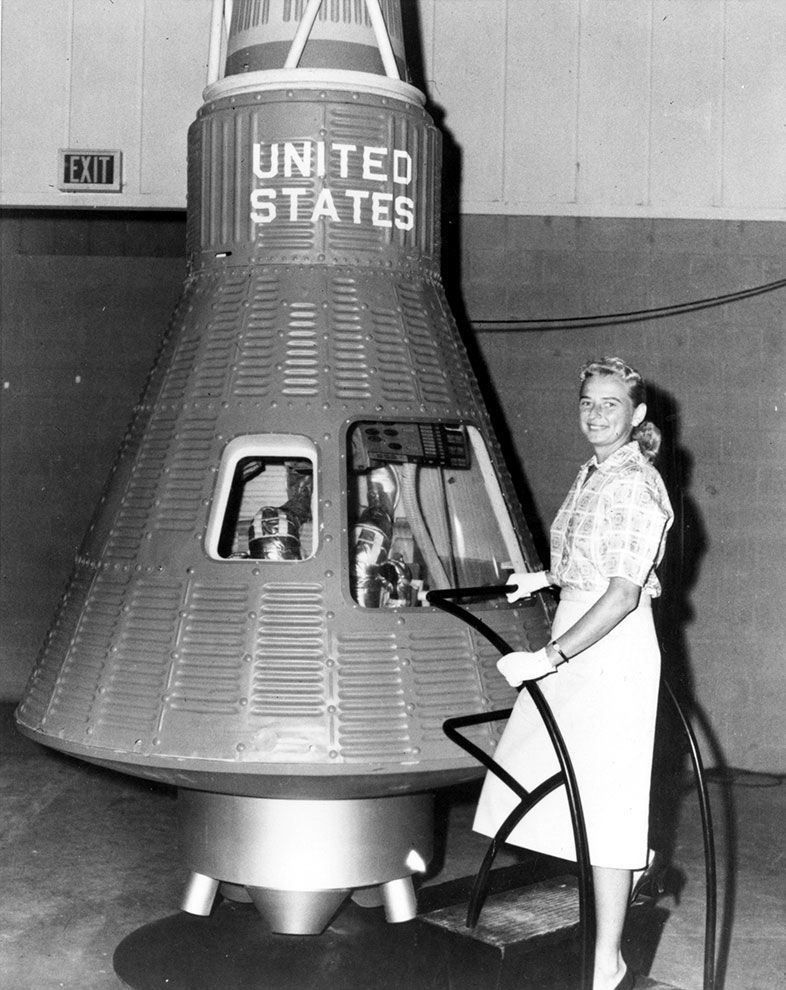 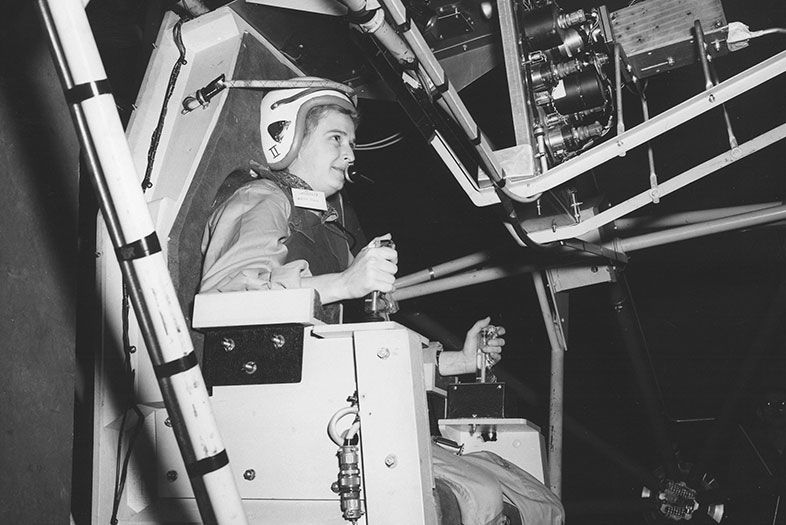 The Space Race may have officially ended 50 years ago when the United States put the first man on the moon, but the Soviet Union had already beaten us to several other milestones along the way. The first satellite, the first astronaut, the first spacewalk—and the first woman in space, in 1963.

NASA wouldn’t send a female astronaut into orbit until 20 years later. Then it took 12 more years before a woman actually flew an American spacecraft. Why did it take us so long? How different, how much further along might the world be, if we had let a woman go into space in the ’60s?

That’s the question director Giovanna Sardelli hopes audiences will ask after seeing They Promised Her the Moon at The Old Globe. The new play from writer Laurel Ollstein tells the true story of Jerrie Cobb and the Fellow Lady Astronaut Trainees, who until last year’s Netflix documentary Mercury 13 had almost completely faded from public memory—indeed, neither Sardelli nor Ollstein had heard of them until they began working on the project.

Ollstein felt obliged to write about the story when she stumbled upon it 10 years ago during a residency at the University of Oklahoma. Born in 1931 in that same state, Jerrie Cobb learned to fly at age 12, and later took any job that would let her keep flying: dusting crops, patrolling pipelines, and eventually becoming a flight instructor herself. She set six world aviation records and served the Navy as a ferry pilot delivering planes overseas.

For research, Ollstein interviewed several female pilots, learning they weren’t that unusual for the era. "I kept coming away with the fact that when women start talking about flying, they have this euphoric look," she says. "It’s not the same way men talk about it. They found a freedom in flying; a way they could have total control."

In NASA’s early years, the head of its Special Committee on Bioastronautics, Randy Lovelace, also ran a private foundation for medical research in Albuquerque. Lovelace invited Cobb to his facility in 1960 to attempt the same physical and psychological testing that male astronaut candidates were taking, and when she passed with flying colors, the massive wave of publicity that followed brought more women into the program.

Women found freedom in flying; a way they could have total control.

All of them met NASA’s basic criteria. They were in good health, had college degrees, commercial pilot’s licenses, and 2,000 hours of flight time. The tests were exhaustive, even harrowing—electric shocks to test reflexes, ice water shot into the ear canal to induce vertigo, an isolation tank, a four-hour eye exam, daily enemas, a throat tube to test their stomach acid, countless X-rays. Ultimately, 13 of these women surpassed every requirement in the first round of testing (some with better scores than the more famous "Mercury Seven"). The oldest was 41 and a mother of eight; the youngest just 23.

But as the best candidates prepared to head to Pensacola for their third and final round of tests at the Naval School of Aviation, the Navy abruptly canceled it, with the excuse that only official NASA programs could have access to their equipment.

Jerrie Cobb dropped everything and flew to Washington, DC. She wrote to President Kennedy in protest, and Congress convened to investigate. (Notably, the 1964 Civil Rights Act making sex discrimination illegal was still two years away.) Those hearings found no sympathetic ear among the Mercury Seven; John Glenn, the first American to orbit the Earth, said, "The fact that women are not in this field is a fact of our social order." Because NASA required astronauts have experience specifically in military jet aircraft, and the US military did not allow female jet pilots, it was de facto impossible for them to become astronauts.

One year later, Valentina Tereshkova, who had no experience prior to joining the Soviet space program except in sport parachuting, would become the first woman in space and return to a hero’s welcome.

Ollstein hopes audiences will leave her play with a sense of how hard these women fought, and how many of their stories are lost. New York’s Miranda Theatre Company held the first workshops for They Promised Her the Moon in November 2016. When Amanda Quaid, who played Cobb, sent out an email blast about the production, it caught the eye of The Old Globe’s artistic director, Barry Edelstein. He invited Ollstein to the Powers New Voices Festival in January 2018 to produce the play as a reading, matching her with director Giovanna Sardelli, who had spent time looking for a women’s history story and was immediately intrigued by the hook, as she puts it: "What happens to somebody when they’re not allowed to live up to their potential?"

The festival served as a trial run to see how Ollstein and Sardelli might work together. One advantage of starting with a reading: Neither had to worry about all the usual logistics, and could just focus on developing the characters. "You learn so much that when you put together the show, you’re very specific about what each character brings to the table," Sardelli says.

The two reunited for a second workshop in August at TheatreWorks Silicon Valley, where the play continued to evolve. "I come from a very collaborative world of working in companies," Ollstein says, "so I love rewriting in the room."

Being able to revise between productions is a unique strength of the medium—she went through several drafts as she kept learning new historical details. "There were originally 20 characters," she says, "because I wrote it in a university setting and they wanted me to throw in as many as possible! I came out with a play that no one would ever produce, because it needed too many actors."

Some early feedback from the readings was skeptical. "People said I went a little far with the reporters," she recalls. "But I used direct quotes, and they’re shocking. You can’t believe how they talked about Cobb in the press. ‘Why yes, her numbers are fantastic—36-24-36!’"

Sardelli and Ollstein both say the collaboration has been fabulous so far. "We’re able to talk about these women like they’re our family now," the latter says. "We’re now on our third cast; we know what will help the actors, what will help the story be understood."

Based out of LA, Ollstein has been present in San Diego throughout development, and is still rewriting in the room. She’s grateful that, in theater, writers have the final say—which is seldom true in film or TV. "If it’s a new play, people want it to be the best it can be. Having the playwright in the room is usually a gift."

Only six of the Mercury 13 are still living. Jerrie Cobb is 88 years old. So Sardelli is happy to think that this play won’t let her extraordinary life fade from history. "Laurel was very smart to focus on just one woman, more than a movement." She hopes that audiences will relate to Cobb as an individual, even removed from the greater context of the fight for women’s equality. Likewise, Ollstein finds the historical setting helps people get past the usual detachment of reading about national politics in the news.

"It’s a really important, inspiring story," Sardelli says. "It’s a universal story, for any human being who’s just a little bit ahead of their time."