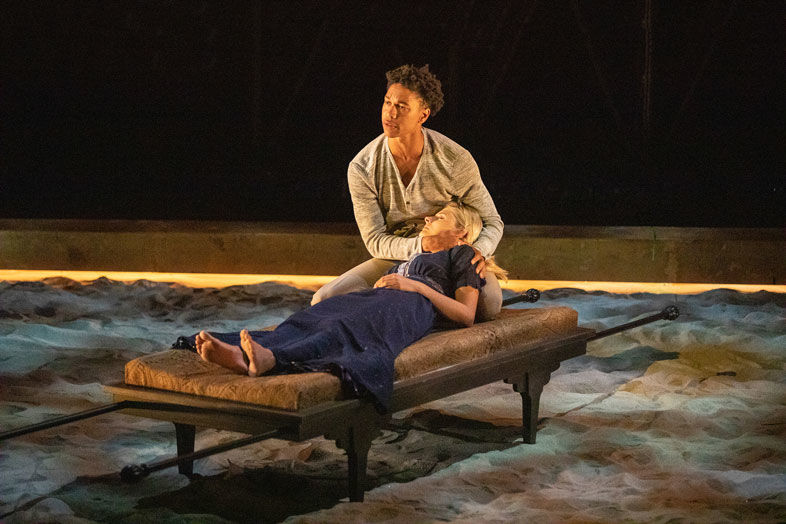 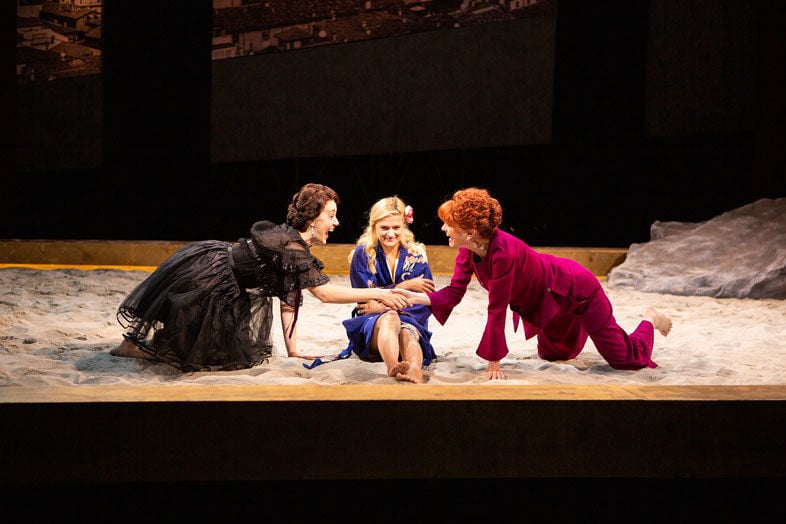 In the interview included with the program for The Old Globe’s new production of Romeo and Juliet, director Barry Edelstein reveals that some of its unexpected touches—setting the action in a sandbox, with most of the actors barefoot, accompanied by the music of composer Erik Satie—came to him in a dream.

Given the capriciousness of dreams, you’ve got to respect the risk involved in realizing them. I’ll choose a play that takes risks and follows a singular vision over one of safe consensus any day. Is it disorienting to hear our star-crossed lovers leap half a millennium into the future to sing Leonard Cohen and Barry Manilow? You bet. But regardless of how well you may personally think these juxtapositions enhance the work, there’s no denying their fuel for postshow discussion. (Justin Gray’s live piano throughout: Lovely. The self-aware commentary interrupting an already anachronistic dance number: Eye rolling.)

Even if you’ve never before seen this play live, our culture is so saturated with its influence and catch phrases that you can’t help bringing your own preconceived baggage into the seats with you. Edelstein’s first mission is to toss all that out, to demand you consider one of history’s most well-known works of fiction anew.

Aaron Clifton Moten’s Romeo is a charming crowd-pleaser, finding surprising wells of humor in a character that’s too often portrayed as a weepy bag of slop.

It worked for me. My biggest observation was just how little sign there is in the first half that this is a tragedy. It opens with teenagers being teenagers—peacocking before rivals, mooning over a breakup, sneaking into a party, falling into new love way too quickly, provoking unnecessary street fights. There’s much more comedy there than you might remember, and it helps prepare you for the moment the bottom drops out from beneath them.

The ensemble is populated mainly by USD’s Shiley Graduate Theatre Program students, and this class has been doing terrific work. Yadira Correa, one of this year’s seven actors to watch out for after her turn as Cassius in Julius Caesar, brings some of that same heated menace to Tybalt, but I confess that Judith Dolan’s costume choice for her is a little baffling: If she needs to quickly brandish a half dozen concealed weapons for a fight in the sand, why slow her down with such baggy layers and long pants?

Fellow students Hallie Peterson and Wenona Truong may have less time on stage (as Capulet Servant and Peter, respectively) but they make the most of it, spinning memorable glimpses of more fully realized characters out of just a few well-chosen mannerisms. Carlos Angel-Barajas summons grave authority as Prince (helped by Dolan with a mafia-donnish overcoat), and veteran Broadway and TV actor Candy Buckley is the runaway audience favorite as Juliet’s spry, mischievous Nurse.

Our title characters are fantastic, and fantastically matched. Louisa Jacobson’s Juliet has the dizzying impetuousness and confidence of a teenage heiress, but can still retract to the small, captivating fear of awakening in a tomb—or failing to awaken at all. Aaron Clifton Moten’s Romeo is a charming crowd-pleaser, finding surprising wells of humor in a character that’s too often portrayed as a weepy bag of slop, a brilliant choice that leads him to breathtaking laughter even in his darkest moments.

I also have to praise Takeshi Kata and Stephen Strawbridge’s scenic and lighting design, respectively: a single backdrop, a Verona rooftop panorama, takes on different color schemes to match the scene, from a lifeless gray at the discovery of Juliet’s apparent death (spoilers?) to an eerie toxic green at the entrance of the ghoulish apothecary.

The show runs nearly three hours, even after Edelstein’s welcome cuts, but even then the actors often churn through the dialogue as fast as they can; once blood is spilled, the hot rage and anguish that follow dissolve quickly into nonstop shouting, which flattens much of the intended impact. Even Prince and Friar Laurence (Jesse J. Perez), whom you might expect to have the cooling force of nonpartisan authority, try to out-yell everyone else. Thankfully the lovers’ end is given a wide berth, and lands powerfully because of it.

You may find moments of excess or incongruity, depending on your taste, but I welcome them; if Shakespeare can bear anything, it’s interpretation that’s fresh and takes bold risks.