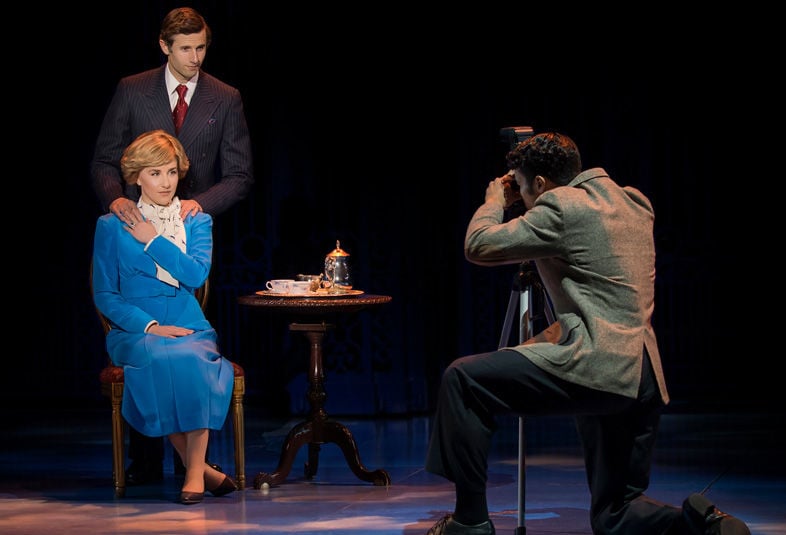 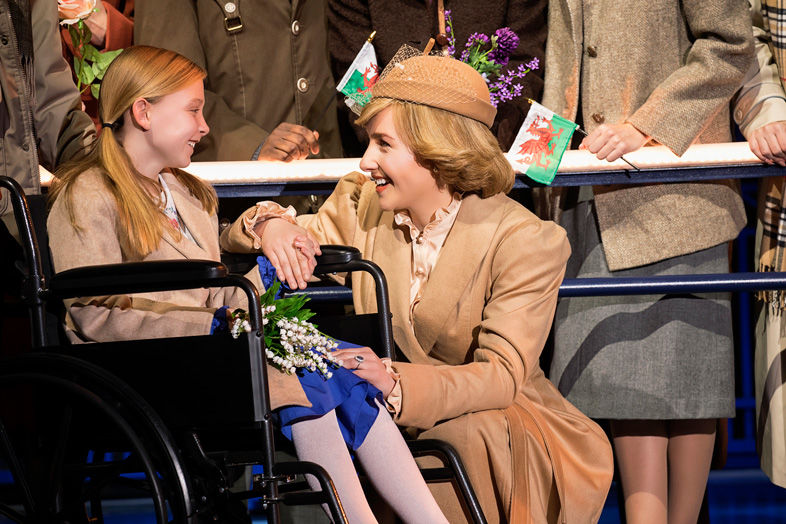 John Berger’s classic essay on art criticism, Ways of Seeing, sums up the hypocrisy of classical nudes that use mirrors to symbolize vanity: "You painted a naked woman because you enjoyed looking at her. You put a mirror in her hand and you called the painting Vanity, thus morally condemning the woman whose nakedness you had depicted for your own pleasure."

This patriarchal damned-whatever-she-does trap came to mind frequently during Diana, the world premiere musical at La Jolla Playhouse. It’s less a biography than a dissection of a doomed marriage; Joe DiPietro (book and lyrics) and David Bryan (music and lyrics) have reunited with their Memphis alum, Playhouse artistic director Christopher Ashley, to create an intimate, sympathetic look at the People’s Princess, one that positions her overwhelming popularity as a millstone around her neck and finds its story arc in the way she learned to wield it, to redirect that popularity in more subversive, noble ways.

It begins with a dilemma familiar to any consumer of palace intrigue: Heir to the throne Prince Charles (Roe Hartrampf) is having an affair with a married woman, Camilla Parker Bowles (Erin Davie), and though they’re clearly mad for each other and would be happiest together, the monarchy’s centuries-old taboo against remarriage demands he find a more suitable princess elsewhere. Shy, unassuming assistant kindergarten teacher Diana Spencer (Jeanna de Waal) seems to fill that role for him nicely, and her humble stock proves an irresistible novelty for the paparazzi who swarm over her in flasher trenchcoats for their slimy number.

Jeanna de Waal is perfectly cast, and listening to her sing is an incomparable treat, even if many of the songs seem to blend into one another.

Diana’s discomfort among the upper crust is well illustrated in the play’s most enjoyable song, "This Is How Your People Dance," when she daydreams of cutting loose at a modern nightclub in the middle of an esteemed classical soloist’s performance, her imagination filling the salon with ’80s pop dancers in neon discotheque lights whirling about the aloof, unmoving Charles. David Bryan’s day job as keyboardist for Bon Jovi pays dividends here, playfully remixing Bach’s Cello Suite No.1 into something you can groove to.

It should come as no surprise that there’s no way Charles comes out of this looking good. The play tries to generate some sympathy for him—the weight of the future crown keeps him from his true love, and all—but there’s no excuse for taking out that frustration on the wife he’s chosen. Starting with Diana’s first public address, when her presence (both figurative and literal, as she steps beyond the barriers to embrace her people) robs him of the attention he feels exclusively entitled to, he holds the public’s esteem for Diana against her. After putting her center stage, he repeatedly blames her for the spotlight. Conduct unbecoming of a princess. Embarrassing vanity.

It’s painfully ironic, of course, since the only attention she really wants—his—is withheld.

Given these confining circumstances, and embarrassed herself by the public disclosure of Charles’s ongoing affair, Diana takes control using the same weapons that’ve been used against her. If the press has committed to hounding her about her appearance anyway, why not go brazenly, norm-shatteringly sexy? And if attending the charity ball in (it’s important to use the play’s own words here) a "fuck-you dress" brings some bank-shot awareness to the causes she believes in, then it’s a net positive.

The song that celebrates this decision should be joyful, liberating. It’s probably the most memorable song of the play. Which is why I think it’s a shame that it relies so heavily on profanity. Not to be prudish; profanity has great powers of emphasis in a well-deployed moment. But here the effect is of a child who’s discovered a new toy that makes a rude noise, and delights in pressing it over and over and over again long after the adults have stopped laughing.

To be fair, that’s the only real trough in an otherwise level, lovely soundtrack. Jeanna de Waal is perfectly cast, and listening to her sing is an incomparable treat, even if many of the songs seem to blend into one another in a continuous near-operetta style such that few of them are hummable in the car on the way home. Tony Award winner Judy Kaye may be a little underused as Queen Elizabeth; she gets to knock it out of the park for her eventual solo, but it comes so late it feels like a digression from the mostly resolved main plot.

A star of the show in its own right is Diana’s wardrobe: Costume designer William Ivey Long must have obsessively studied the archives, because he’s nailed many of her iconic looks, and they’re stunning to see up close. And despite my minor complaints, every moment Diana is given to connect with her people is moving, especially when she makes the unprecedented-for-the-time decision to visit a clinic treating men with AIDS. Taken all together, Diana is a worthy, persuasive tribute to what endeared the People’s Princess to so many, and an insightful picture of the struggles she faced behind closed doors.