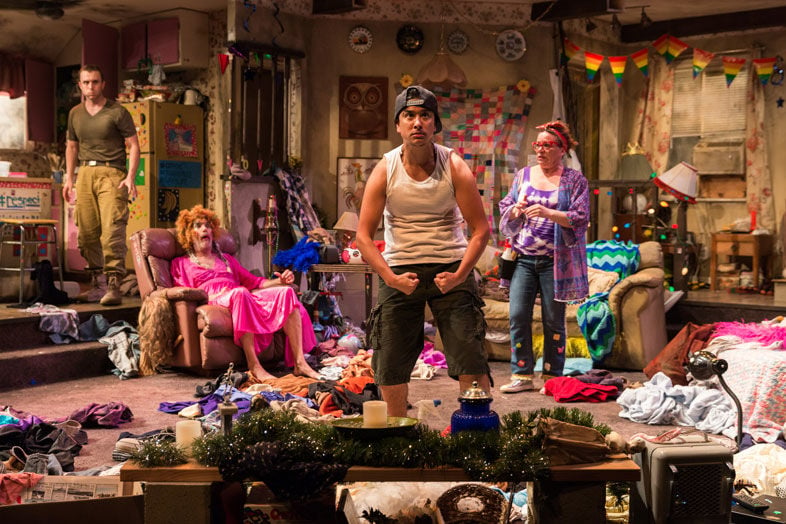 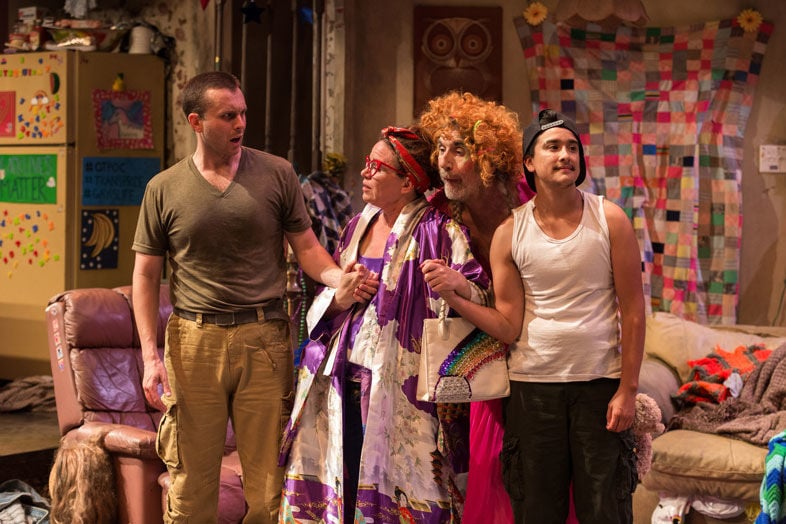 A young marine returns from a three-year deployment in Afghanistan, dishonorably discharged for drug abuse, to find his family unrecognizable. His father’s stroke was worse than Mom let on, rendering the formerly quick-tempered, iron-fisted patriarch childlike and nearly mute. He’s kept in a constant state of emasculated dependence by his wife, who, drunk on sudden liberation, has let the house go to seed, forsaking all her traditional responsibilities and uncritically embracing every new-age or liberal idea she can. The marine’s younger sibling, who as far as he ever knew had been female, now uses the gender-neutral pronouns ze, hir, and hirs, and is dying to escape their home to live in a genderqueer anarchist commune.

How can this family—and, by implication, the country—have changed so much in such a short time? And what can he (a former combat-zone mortician, just to make the metaphors that much sharper) possibly make of the tattered remains of the only gender and parental roles he’s ever known? Is anything in this ruined house worth saving, regardless of how many painful memories it holds, in the face of a seemingly rudderless future?

Did I mention this is a comedy? Well… it’s complicated. It’s also tragic, and farcical—or as the mother delightedly puts it, "We’re all a little bit of everything." Above all else, this genius play by Taylor Mac recognizes enough absurdity and humanity in those upholding the patriarchy and those smashing it to deny anyone a simple answer.

Max (Avi Roque) is a know-it-all teenager who deploys shotgun blasts of gender-studies buzzwords, expecting everyone to maintain perfect observance of hir identity even though ze hasn’t quite nailed it down for hirself. It’s rightly funny when ze mimicks hir brother’s alpha-male posturing ("I’m trans-MASCULINE!")—yet who can blame hir for craving a "safe space" when ze’s grown up in this unstable environment?

Paige (Deanna Driscoll) would be an om-ing hippie caricature if not for the searing, vengeful cruel streak she directs at her husband; she can lead a hilariously over-the-top drum circle puppet show one moment and inspire piteous dread the next, as you realize she’s not only removed all boundaries from her child but now completely depends on hir to navigate this new world for both of them.

Meanwhile, Isaac (Dylan Seaton) is so unmoored by the wreckage of his home and family that he seems to be riding the wave of a nervous breakdown that never quite crests. It’s difficult to find dimension in a role that requires near-constant outrage, but in the rare quiet moments, the person yearning for reconciliation is visible just beneath the surface.

This genius play recognizes enough absurdity and humanity in those upholding the patriarchy and those smashing it to deny anyone a simple answer.

Speaking of the stifled inner self: Despite having very few lines, Arnold’s (Joel Castellaw) presence looms large. Having witnessed a similar mental decline in my own family, I found it difficult to watch how helpless and infantile he’s become, but before anyone can feel too sympathetic for him, a glimpse of his old violence will flare up, inchoate and frightening.

There are no scene breaks before intermission and final curtain, and there’s so much going on thematically—most of it shouted amid whirling chaos—that it can be tough to keep up. It’s well worth your focused attention, though: If you’re up for it, the heights of absurdity prepare you for depths of cathartic despair.

I have no idea how any actor can put themselves through a play this raw and real more than once, let alone night after night. It must be exhausting holding such a tightly focused lens up to the world. Cygnet’s associate artistic director, Rob Lutfy, has put these four actors through the wringer to produce brilliant, uncompromising work, and they all deserve any awards we can throw at them. Kudos also to the properties designer, Bonnie Durben, for all the messy yet particular details strewn across the set. It’s an outstanding feat, but you’ll definitely need a drink and some deep breathing afterward.

Directed by Rob Lutfy Through October 28