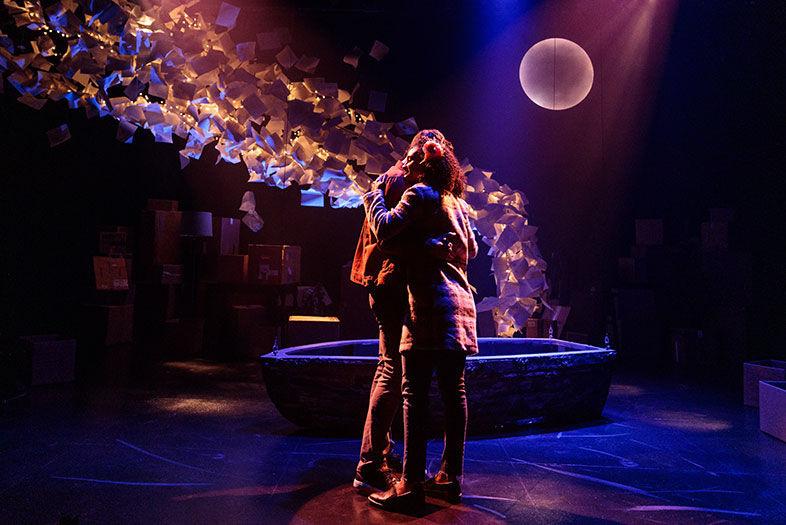 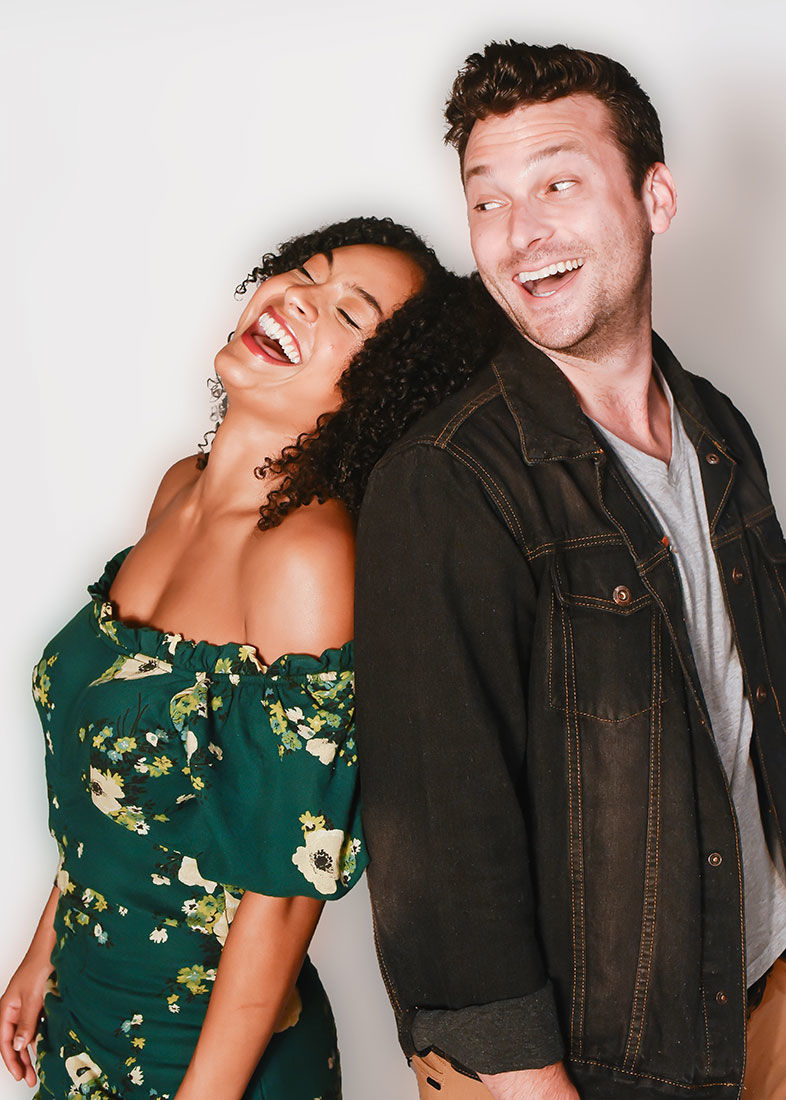 Advice columnist Dan Savage often reassures heartbroken readers by saying that every relationship they have is going to end, until one doesn’t—and just because a relationship ends doesn’t mean it was a failure. The Last Five Years, a stripped-down, two-person musical from Jason Robert Brown, tells a fairly conventional romance in an unconventional way, by freely skipping back and forth through time.

Where most fairy tales or rom-coms would begin at the meet-cute and end at the wedding day, there are two separate timelines at work here, one going forward, the other back, neither in a straight line. At the opening, Jamie (Michael Louis Cusimano) has just met Catherine (Racquel Williams) and is over the moon for her; while across the stage Catherine is saying her final goodbye to Jamie. They swap back and forth, each playing their half of a sunny early memory or one from their decline, never actually singing together or making physical contact until they meet, for a duet and a proposal, in the middle.

The high concept drives home the message that just because this couple wasn’t destined to part at death doesn’t mean it was all for naught. By their nature, the disjointed juxtapositions avoid cliché. The strain and heartache are softened by the limerent butterflies, and the foolhardy optimism is tempered by the irreconcilable differences. The effect seems to me the same healthy attitude one could take to one’s own past loves: to weigh them not against the superhuman standard of "ever after," but only against themselves, by their balance of good days and bad.

Michael Louis Cusimano's got one of the winningest smiles of the San Diego stage, and continues to prove that he should be dancing as often as possible.

Michael Louis Cusimano is on a roll this year, coming straight off the similar two-person relationship-examining musical Girlfriend. He’s got one of the winningest smiles of the San Diego stage and continues to prove that he should be dancing as often as possible. His voice doesn’t always stick the landing but his feet always do. He’s very well cast as a writer on a meteoric rise. The character’s charisma is so radiant that when his callousness and indifference begin to surface, they cut especially deep.

New Yorker Racquel Williams is a newer face and a formidable vocal talent. She switches convincingly from New Relationship Energy to Crumbling Desperation and back not just in her facial and musical expression, but in the whole way she carries herself onstage. Catherine is the slightly less sympathetic of the two characters (that’s what you tend to get when you write pseudoautobiographically); an actor struggling to get cast in the shadow of her partner’s success, she orients nearly all her spoken needs toward him and willingly subsumes a bit of her own identity for his sake—see her defining song "I’m a Part of That."

There’s definitely a critique of common relationship incompatibilities to be made here. Though the emotion and score of the midpoint duet is all uplift and cheer, the lyrics plainly state the foundational rift that will dissolve them: While Catherine is singing about forever, Jamie can promise only "The Next Ten Minutes." (And the next ten after that, and so on.) His stance may sound cynical, but he’s making their commitment an active choice. He has to keep choosing her every day for them to work out, and when he doesn’t, they don’t. It’s not a sentiment the wedding industrial complex can sell any package deals on, but it’s the more honest one.

My only small gripe with the story is the choice—minor spoiler, I guess—for Jamie to have an affair. Within the context of all the ways his relationship with Catherine is already bowing (and having been in a similar position), it’s clear to me that the affair is a symptom, not a cause. But the consensus definition of monogamy upheld by most of our media sees any extramarital dalliance as—to borrow another Dan Savage phrase—a relationship-extinction-level event. And because of that, I worry about audience members coming away from this play with an oversimplified understanding. "They broke up because he cheated." No, they broke up because they were incompatible and unhappy together. If they hadn’t been, for all we know their relationship could have survived the affair.

I can’t not mention Justin Humphres’ striking, imaginative set design. That gut-wrenching symbol of a love’s final days—a room packed up in moving boxes—is leavened by a suspended whirlwind of written papers, an airborne sculpture symbolizing the promise that brought them together and sustained them. Music Director Patrick Marion and fellow musicians Erika Boras Tesi, Diana Elledge, Sean Laperruque, Mackenzie Leighton, and Jim Mooney handle a score that’s so distinctive you forget that the play is mostly sung through. Each song is memorable, revealing its own little truth about love and happiness, and there’s no telling which (or how many) of them you’ll be humming on the way home.

at Cygnet Theatre until November 17