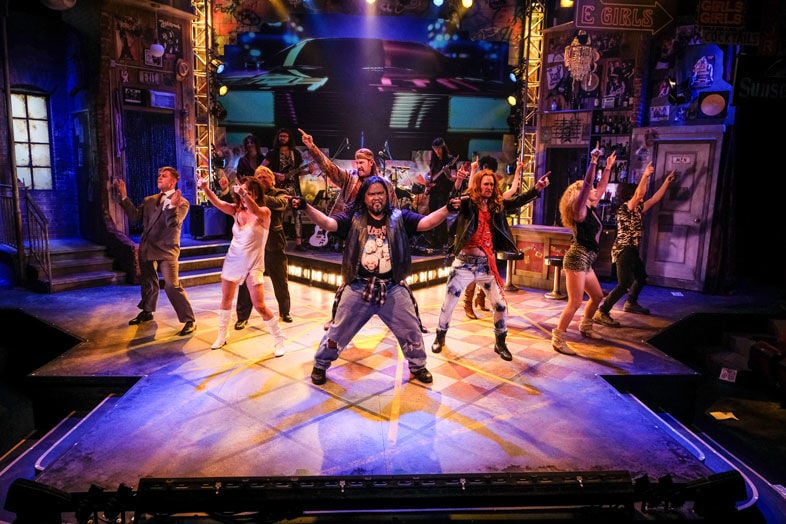 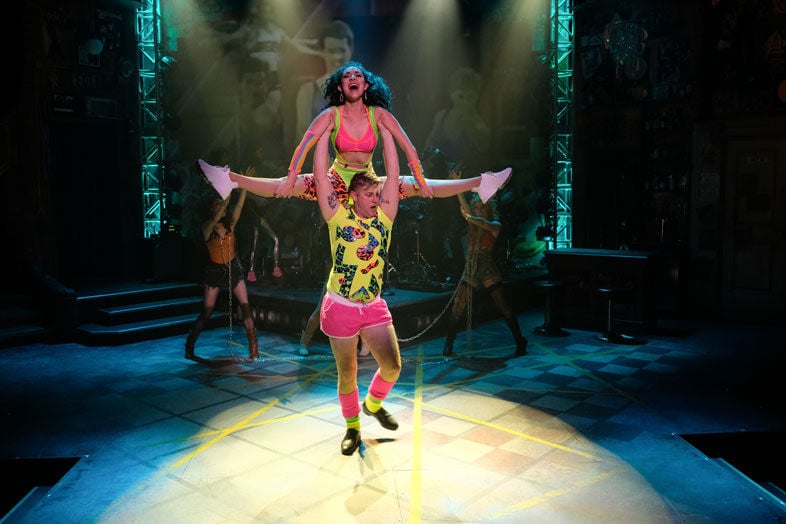 The jukebox musical Rock of Ages embraces the over-the-top, cheesy horndog sincerity of classic rock and power ballads, and it’s got enough occasional winks and fourth-wall breaks to give even the most skeptical cool-kids the veneer of irony they’ll need to just relax and enjoy having their face melted. (Cygnet Theatre kindly offers earplugs, if needed.)

The connecting story is familiar, but it works. Small-town girl Sherrie (Megan Carmitchel) strikes out to make it big on the Sunset Strip, ending up at the Bourbon Room, a beloved dive that’s in danger of being cleared out for a mall. Bartender and aspiring rocker Drew (Rory Gilbert) falls for her quick, but is too bashful to make the first move—and her attention turns instead to superstar Stacee Jaxx (Bryan Banville), who’s agreed to play one more show at Bourbon before ditching his band for a solo career.

That show is a last-ditch effort by owners Lonny and Dennis (Victor E. Chan and Berto Fernandez) to save their bar from the wrecking ball. Their biggest ally on that front is city planner Regina (Emma Nossal), who chains herself to the building in protest against developer Hertz (John Rosen) and his son Franz (Zackary Scot Wolfe).

Carmitchel and Gilbert are a fine pair with the pipes to match, especially on standouts like Foreigner’s "Waiting for a Girl Like You" and "I Want to Know What Love Is." But the show’s most charismatic couple has to be Chan and Fernandez, who feed off each other’s buoyant energy and should be cast in a buddy comedy immediately. Chan doubles as the narrator, a mischievous emcee who’s a little Puck and a lot Jack Black, and meanwhile sustains the high notes with ease.

The show gives even the most skeptical cool-kids the veneer of irony they’ll need to just relax and enjoy having their face melted.

Banville’s entrance steals the first act, his breathlessly icky sex monster Stacee Jaxx writhing and thrusting his way through Bon Jovi’s "Wanted Dead or Alive" in red leather pants and a glittery fishnet vest. Not to be outdone, Nossal and Wolfe steal the second act when Regina finally convinces Franz to rip away his overlarge power suit, revealing blinding neon workout wear for Pat Benatar’s "Hit Me with Your Best Shot." These two were great together in Hairspray last year and they break out some impressive acrobatics here.

Even if, like me, you’re a latecomer to a lot of this music (For context, the first record I ever bought was Weird Al’s Bad Hair Day in 1999) the performances are so energetic and crowd-pleasing—excellent covers by the band (Patrick Marion, Jim Mooney, Tom Versen, PJ Bovee, Martin Martiarena) and dancing by the ensemble (Drew Bradford, Siri Hafso, Anise Ritchie, Tamara Rodriguez, Bailey Day Sonner, E. Y. Washington) that you’re bound to have a good time.

at Cygnet Theatre through August 25