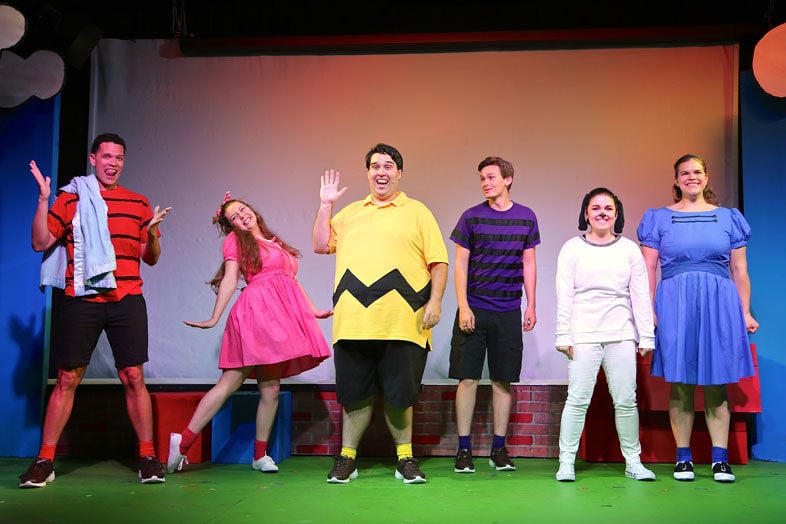 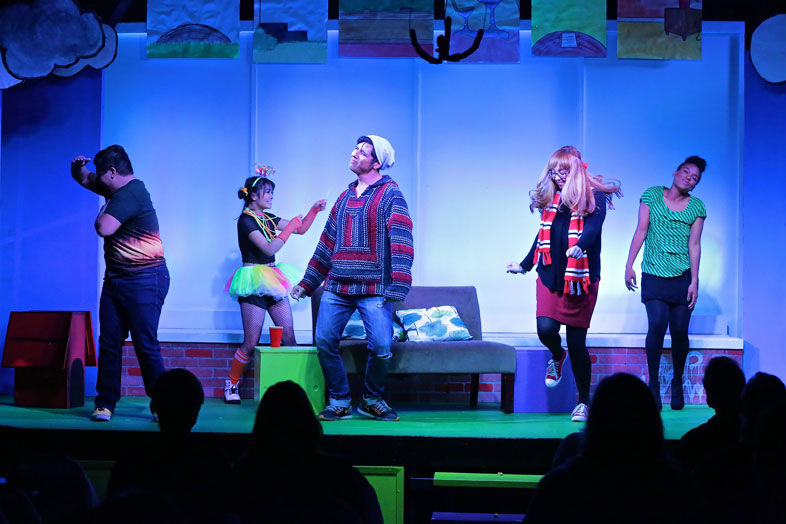 OB Playhouse has an established history of two very different kinds of shows: The raunchy and subversive, like Hair, The Rocky Horror Show, and Avenue Q—and the family friendly, like Elf, The Pirates of Penzance Jr., and A Year with Frog and Toad. It’s a pretty appropriate niche to fill, considering Ocean Beach’s reputation as the city’s last bastion of boomer counterculture. You may not think these two tracks would ever intersect, but the theater company has found a smart way to showcase everything it does best: Run the squeaky-clean You’re a Good Man, Charlie Brown in rotating repertory with the unauthorized Peanuts parody Dog Sees God: Confessions of a Teenage Blockhead.

The first premiered in 1967, at the height of the strip’s quality and popularity. Newly introduced Peppermint Patty is absent, and Marcie, Franklin, and Woodstock wouldn’t come until later, but the Broadway musical hits all the other notes you’d expect from an adaptation: Charlie Brown (Patrick O’Connor) is the butt of most of his friends’ jokes, Linus (Jeremy Andrews Williams) waltzes with his security blanket, Lucy (Georgia Ladd) leans over Schroeder (Noah Williams)’s piano, Sally (Stella Coleman) resists art criticism, and Snoopy (Analisa Reynoso) imagines air combat with the Red Baron.

I last saw Ladd and O’Connor in The Mystery of Edwin Drood at OnStage Playhouse, and they make a perfect pair for Lucy and Charlie. Adults often imagine children as precious caricatures, but these two remember the very real raging ego and crippling depression, respectively, of Schulz’s characters. When soft-spoken Schroeder gets his first solo, Noah Williams’s capital-B Broadway voice is a splash of ice water—Holy cabooses, where did that come from? And Reynoso is a charming triple threat, miming while the humans talk, projecting a confident tenor for her own songs, and breaking out a half dozen different dance styles for "Suppertime."

The standout number is the first-act closer, "The Book Report." All four principals reveal character at once through their approach: from Linus’s intellectualizing and Lucy’s bullshittery to Charlie Brown’s panicked paralysis and Schroeder’s complete disregard of the assigned topic—all while Sally and Snoopy conduct a farce of a rabbit hunt in the background. If you have any soft spot in your heart for Peanuts—especially if you have some kids to bring along—this show is a sure bet.

But if you are bringing the kids, make sure you’ve got the date right. Otherwise you’ll know right from the opening lines of Dog Sees God (OB Playhouse’s first non-musical to date), when "CB" (Chris Bona) describes having to euthanize his beloved pup after he contracted rabies and tore his yellow bird friend to bloody shreds. The parody imagines the same kids about ten years down the line, clobbered by puberty and other harsh realities.

Your enjoyment of this one will hinge mainly on your indulgence of the "edgy versions of children’s characters" trope. "Van" (Andrew Aguilar) smoked the ashes of his security blanket in a blunt; "Van’s Sister" (Kimberly Marron) is in a psychiatric ward for setting fire to Freida’s naturally curly hair, et cetera. By the end there’s no box the script hasn’t checked—group sex, abortion, incest, gun violence—and the fact that some seem dropped in just for shock value while others are supposed to be genuine character motivators creates a tone that’s uneven at best.

Granted, it’s not just an exercise in profanity. Playwright Bert V. Royal imagines plausible visions of how "the gang" might’ve turned out in 21st-century suburban America. Philosopher Linus becoming a stoner is kind of genius. Fascinated-by-novelty Sally ("CB’s Sister," Jacquelynn Nguyen) trying out several different identities is consistently funny. Peppermint Patty and Marcie might’ve been the kindest of the neighborhood girls (It was Violet, Lucy, and regular Patty who sang "Failure Face" to Charlie in the first Peanuts movie), but children’s cruelty to one another was always a major theme of the comic, and teenage "Tricia" and "Marcy" (Ashley Graham and Courtnee Dempsey) becoming cliquey "mean girls" works well, too.

It’s bizarre to think that a play released in 2004 is already showing its age; of course there will always be toxic jerks, but I swear—I hope— that today’s teens are at least a little more woke than this. The script also takes an outdated, fresh-from-Columbine view on what causes school shootings, effectively blaming the victims. (i.e., "If only you’d been nicer to those boys, they wouldn’t have killed you.")

Despite these rough edges, what both plays share in common—and what makes them interesting to see as a pair—is an intimate understanding of what it means to feel like an outcast, and how invaluable it is to have someone on your side. Bring a broad sense of humor, and if you see them on consecutive nights, I recommend ending on the happier note.

Both at OB Playhouse through May 12