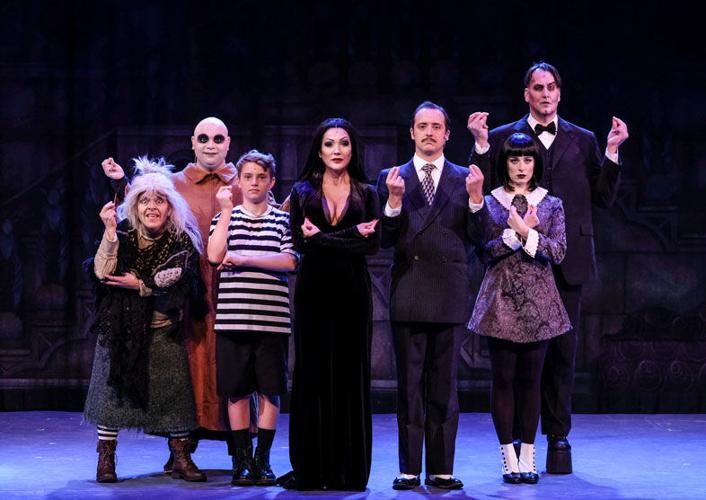 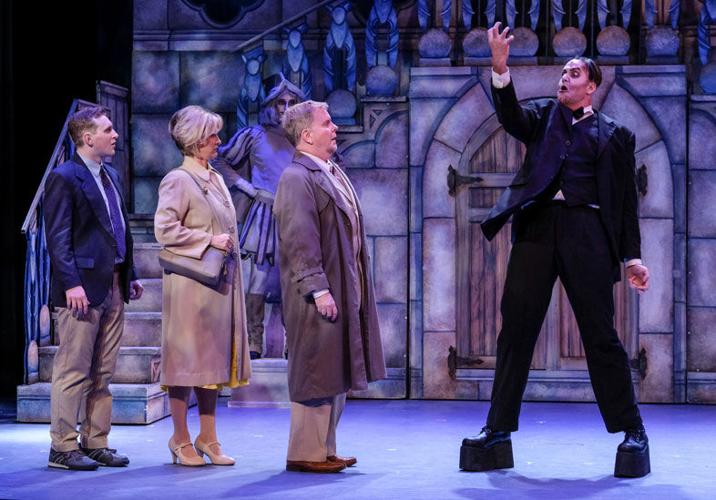 The Addams Family is one of those properties that feels impervious to review. It carved out a comfortable niche in pop-goth culture half a century ago, and every generation since has grown up with some version of it, whether a live action series, an animated one, or the ’90s movies. A new animated film modeled directly after the original comic’s character designs is due in time for Halloween next month, and Welk Resort Theatre in Escondido is getting in the spooky spirit by staging the 2009 Broadway musical.

You know the characters; you know the theme song. The only time my family ever walked out of a theater was during the 1991 film (I was seven years old; it was apparently more violent than Mom and Dad expected?), so I barely remember it, yet whenever the Addamses reincarnate in some new medium I feel an irrational fount of goodwill for them. It’s got to be more than store-brand nostalgia, right? There’s something evergreen about Gomez, Morticia, Wednesday, et al.; a sweet spot of accessible counterculture that keeps appealing to new generations.

Erica Marie Weisz is a poised, elegant vamp as Morticia; her smoldering chemistry with Koppman is the heart of the show.

Not to overanalyze—and I could be mistaken—but the musical seems to present the most overtly Latin rendition of Gomez and Morticia yet, and it can’t be coincidence that what freaks out their WASPy visitors is their unashamedly intimate relationship both with each other and with the world of the dead. Which makes this story’s central plot an even more delicious twist: Wednesday is in love with a normie. (Morticia recoils at her wearing—gasp—a color besides black.)

Kevin Hafso Koppman is magnetic as Gomez, employing much of the same swagger as when he played "The Visitor" in Picasso at the Lapin Agile. Erica Marie Weisz is a poised, elegant vamp as Morticia; her smoldering chemistry with Koppman is the heart of the show. Chelsea Emma Franko is no stranger to the witching hour, having been the standby for Elphaba in the national tour of Wicked—she may not quite have Christina Ricci’s ice-cold glare, but she has the voice to beat.

Berto Fernandez, fresh off a wonderful turn as Dennis in Rock of Ages, inspires laughter with every grunt and lumbering step as Lurch. Nancy Snow Carr and Steve Gunderson are a perfect pair as Alice and Mal Beineke, said WASPs: Both have a demonstrated excellence in "goody-good who reveals a wild side," the former as Rosie in Welk’s own Mamma Mia! and the latter as Wilbur in Hairspray. Another familiar Mamma Mia face is Drew Bradford, playing their son and Wednesday’s beau, Lucas. Pugsley (Blake Ryan) and Grandma (Kat Fitzpatrick) don’t have as much to do but are funny when they do it, and Uncle Fester (Andrew Metzger) has the standout number of the whole production, "The Moon and Me," exquisitely weird in the most delightful way. (I could’ve done without the character’s topical fourth-wall breaks—I’m at the theater to get away from the news, thanks—but if anyone here’s going to do it, Fester’s the right choice.)

This show apparently got some major revisions after it was first tried out in Chicago, and they were all for the better: The new or revised songs, "Secrets," "Trapped," and "Not Today," all sell you on the Addamses as real people worth caring about, bizzare as they may seem. A set of mostly-mute "ancestors," ghosts from various periods of history, serve multiple purposes: backup dancing, chorus commentary, even creepy-statue set dressing. Out of the whole soundtrack, the most memorable hooks belong to "Crazier Than You" and the opener, "When You’re an Addams," though the rest all add up to a phantasmagorical good time with plenty of laughs. Get your snapping fingers ready.

The Addams Family, directed by Larry Raben and Noelle Marion

at Welk Resort Theatre through November 10