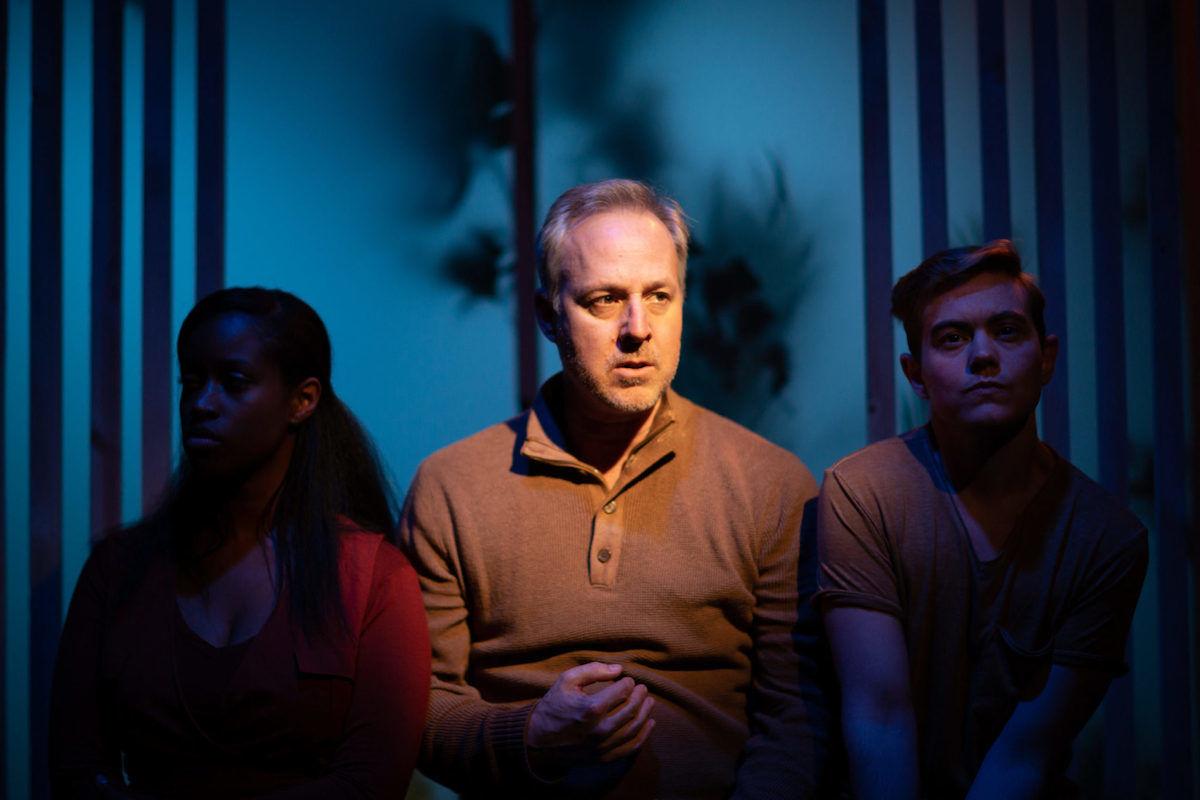 Andréa Agosto, Andrew Oswald, and August Forman in A Kind of Weather at Diversionary Theatre 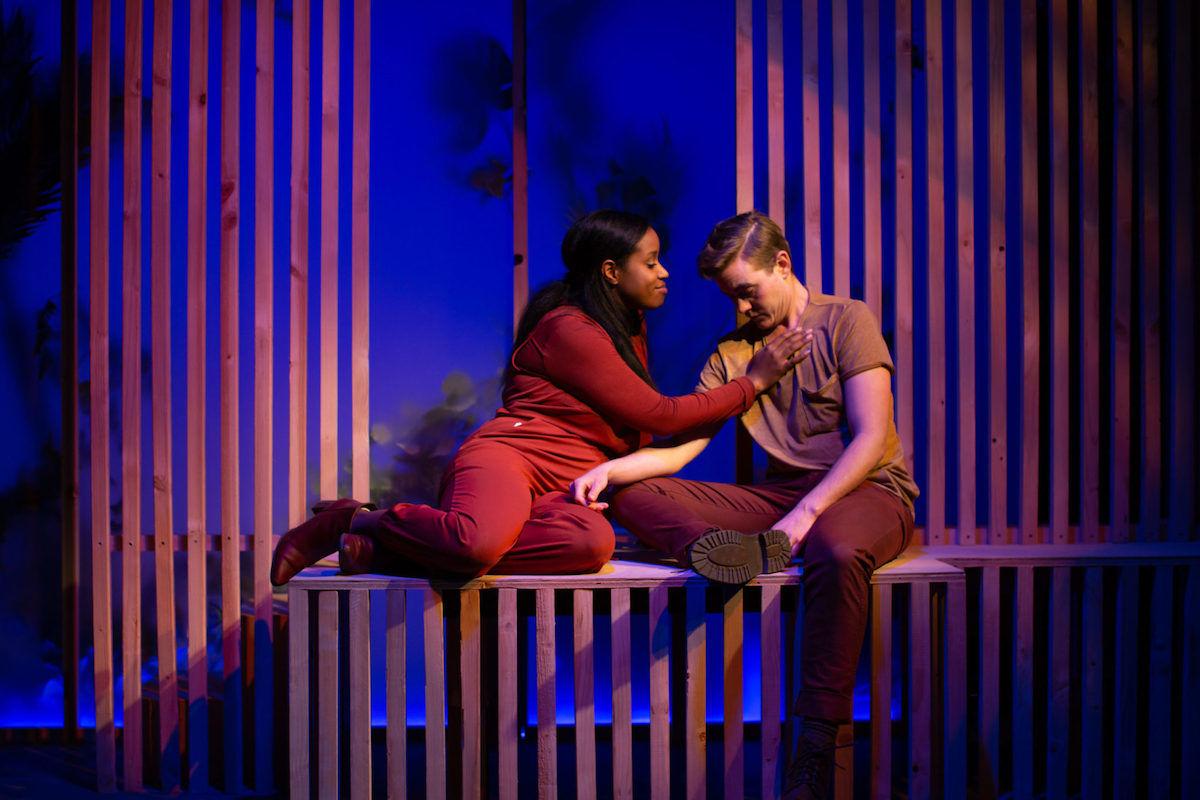 Writing an honest memoir is hard enough when you’re not dating your editor—let alone dealing with a heartbroken parent who needs a place to stay. That’s the comedy- and pathos-rich premise of this inventive world premiere directed by Bea Basso. Kid (August Forman)’s life is turned on edge when his father, Grey (Andrew Oswald) unexpectedly shows up at his Prospect Park apartment. Grey and Kid’s mother divorced when she discovered his affair with Janice (Marci Anne Wuebben), who’s now also separated from him. Grey is about 30 percent absent—if not yet in dementia territory, still plainly unmoored in time and space. He often experiences the past and present at the same time; at once in Jamaica, Queens, with his son, and in Jamaica, the country, the last place he’d seen Janice. And he brings a hefty dose of parental assumption, expecting, without asking, to live with Kid while he composes himself.

This complicates Kid’s day immensely. His editor and girlfriend, Rose (Andréa Agosto) arrives just after Grey, having previously scheduled some alone time. The first third to half of the play gallops along from this classic, sitcom-like collision: Forman especially draws frequent laughs with their dry wit and expressive stage presence as they try to get things back on track, patience wearing thin. Kid and Rose eventually accept that they’ll just have to bring Grey along to the industry party they’re attending that night, celebrating Rose’s recent promotion.

There’s a lot on the line at the party: Rose’s boss, Rick (Salomón Maya) is concerned about her personal relationship interfering with the deadlines on Kid’s memoir, and Kid is resisting his publisher’s pressure to make the book more explicitly about his gender transition, which he sees as a clichéd narrative and an insufficient word, besides, to describe what he’s gone through. The strained moments multiply, and the comedy/drama needle realigns a bit as Grey relives the party where he first met Janice, and Kid, too, steps out of time to relive the party where he met Rose.

The show’s marketing and its introductions in the program play up these temporal displacements, almost as if to help the audience brace for them, but they never seemed gimmicky or unclear to me. The shifts between present and past naturally follow what the characters are feeling, and playwright Sylvan Oswald’s dialogue makes it clear when and why they occur, even when they lead us (briefly and enjoyably) into different genres—melodrama, musical—and the fourth-wall breaking is minimal. The nonlinear timeline serves the play thematically, as well, complementing what Kid is trying to express about popular notions of queer identity.

Andrew Oswald gave one of the best performances of 2019 in Diversionary’s Hour of Great Mercy, and he’s in fine form again with another flawed, sympathetic lost soul searching for reconnection. Agosto makes her secondary character stand out to an even greater degree than her highly memorable turns in Moxie’s Dance Nation and Diversionary’s Bull in a China Shop (more leads, stat!), the indispensible third point of the first half’s comic triangle who shows great continuity of presence—even when the spotlight is on an entirely different scene at the opposite end of the stage, she’s still wordlessly developing her own.

The playwright’s voice is less confident in Janice, who spends most of her introduction telling a story she read in a magazine that may serve the play’s themes but less so her own character. Still, Wuebben radiates warmth and charm, especially when paired with Oswald. Compliments also to Elisa Benzoni’s cohesive autumn-palette costumes and Yi-Chien Lee’s set, which accordingly pairs semi-abstract wooden slats with some foliage behind a ghostly screen.

This is the first of three plays in Diversionary Theatre’s Gender Series, and given the relatively light, individualized perspective it offers, I’m really looking forward to seeing how it’s complemented by the next two, the love story Plot Points in Our Sexual Development in March and the musical Head Over Heels in May.

A Kind of Weather

At Diversionary Theatre through March 8