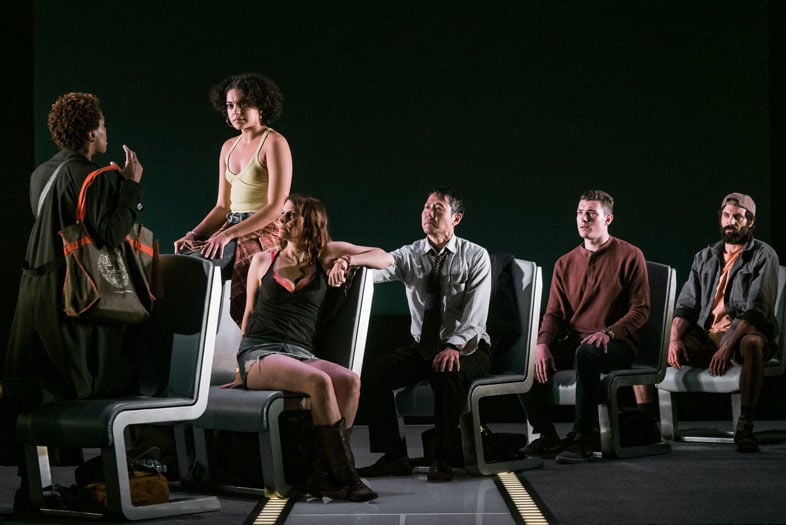 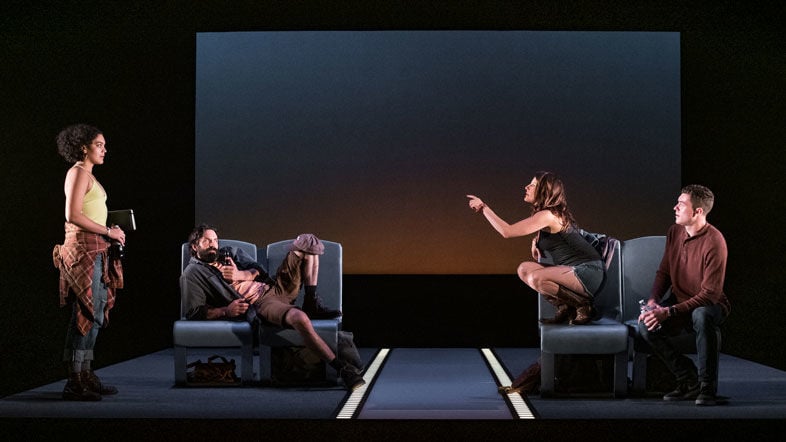 For Americans, there’s an intrinsic romance to train travel. Trains are wrapped up in our historical Old West identity, and because we use them far less often, riding one long-distance creates a slightly surreal, liminal state very unlike air travel: They’re usually so sparse you can’t help but be aware of each other individual passenger, and there’s no telling when someone will come or go. If you let your mind wander, you start to wonder who those strangers are; where they’re going—or what they’re leaving—and why.

That’s the narrative playground explored by The Coast Starlight, a world premiere at La Jolla Playhouse. TJ (Nate Mann), a young Navy medic, boards the eponymous Amtrak line in San Diego, and is joined one at a time by five other characters at major stops on the way north. He tells the audience that, in reality, he barely spoke with any of his fellow passengers. Instead, what follows are possible conversations they could’ve had. He imagines the fullness of their lives based on what details he picks up on, and in this hypothetical space all these strangers become collaborative storytellers, connecting with one another as well as with him. Each one has a compelling story about why they’re on this train, and each would have something to learn from another if only they’d made that first step and opened up.

It’s a fun, fascinating conceit, and playwright Keith Bunin takes it as far and in as many directions as you could hope. (My biggest complaint about high-concept stories is when they’re only half explored—as long as you’ve invested enough in the characters to maintain some tether to reality, why miss the opportunity to plunge into the deep end and see how far down it goes?) If anything, the play has a few too many false crescendos where it seems to be wrapping up, only to linger a little longer.

If Bunin were to continue workshopping it, he could stand to "kill a few darlings," because it also (if you’ll pardon the pun) takes a while to build up steam. All the passengers fit some Californian archetype: The second after the San Diego sailor is Jane (Camila Canó-Flaviá), an animator from Los Angeles who stands at an alien-anthropologist detachment from everyone else while drawing their portraits. Her character doesn’t ring false, exactly—I recognize plenty of my old artist friends in her—but at first when it’s just the two of them, their line delivery is nigh robotic. I talk now you talk now I talk.

Thankfully the show begins feeling more natural as soon as the next passenger, Noah (Rhys Coiro), boards around San Luis Obispo. As a veteran, he and TJ share a connection that’s immediately more interesting, and draws out some enticing secrets about TJ’s past. Coiro has the best physical presence of the cast; you can see the radius of his comfort zone by the stretch of his limbs, expanding or contracting almost like a martial artist, always sizing up the person he’s paired with.

Next on is Liz (Mia Barron), who gets the best introduction, carrying on her half of a harried phone call with a friend about her cheating husband, whom she’s just left behind at the Esalen Institute in Big Sur. After her is Ed (Rob Yang), a sort of modern-day Willie Loman who spends his life in Best Western conference rooms listening to people pitch bizarre patent ideas (boarding in Silicon Valley, appropriately) and is clearly at the end of his rope. The last to join is Anna (Stephanie Weeks), returning to her family from Oakland in the wake of her brother’s death.

This is the second show this season developed as part of the Playhouse’s DNA New Work Series, which among others previously produced my favorite play of 2016, Miss You Like Hell. Bunin was commissioned to write it after his work Sam Bendrix at the Bon Soir was featured in 2012’s Without Walls program. A transplant from New York, he immersed himself in literature about California and was inspired by the trips he’d taken up and down the coast, and his outsider’s fascination and traveler’s romance are a beautiful combination, perfectly fit for the play’s unique structure and setting.

Having traveled round-trip coast to coast myself by way of the Southwest Chief and Capitol Limited (yet failing to pack more than a single uninteresting Tolstoy), I identified with many of the feelings explored here. That dangerous, double-edged sense that in every new city you could disembark and create a whole new story for yourself—or disappear without a trace. But even more than that, the central message The Coast Starlight seems invested in is moving and true: that we might all understand one another better, and find mutual support in the most unlikely places, if only we bothered to look up and reach out more often.

at La Jolla Playhouse through September 15