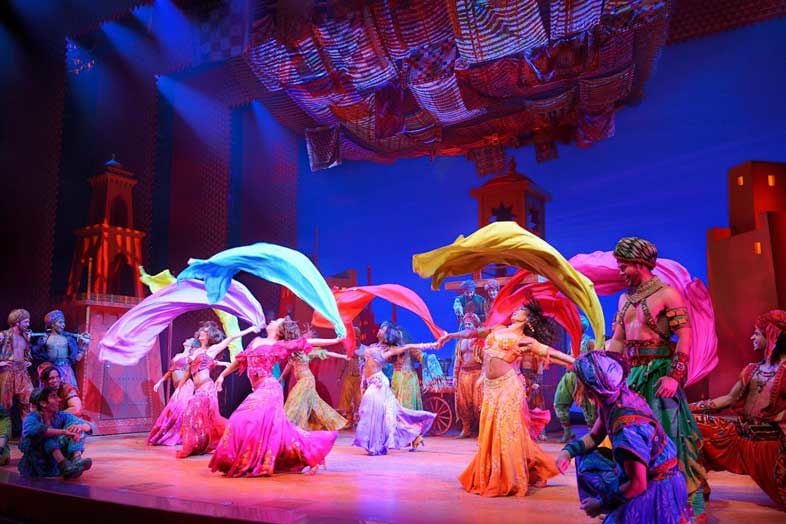 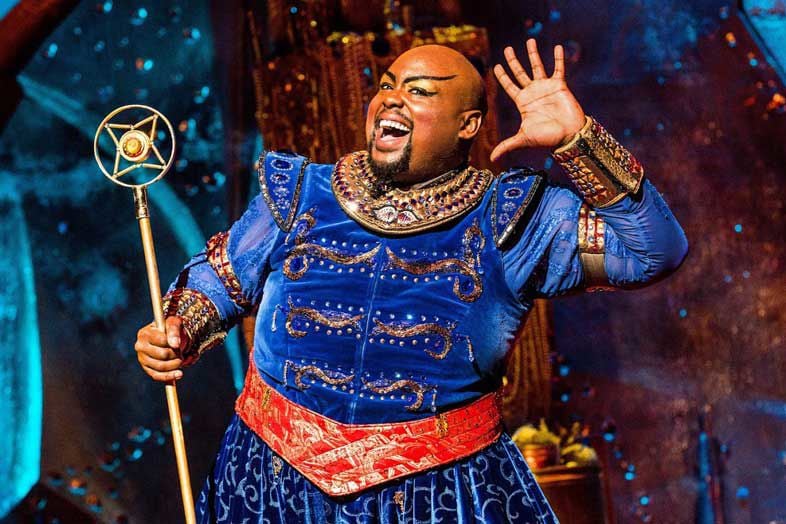 The pop culture nostalgia cycle works in 20–25 year intervals, so anyone who enjoyed something as a preteen can experience a new version once they have their own children and disposable income. Live-action remakes of the three most successful ’90s Disney Renaissance films—Beauty and the Beast, Aladdin, and The Lion King—are arriving right on schedule, in the same order. (Brace yourselves: This also means that live-action Shrek is inevitable.)

Disney’s broadway adaptations tend to arrive sooner: Beast and King, the more critically acclaimed of the trio, each came within three years of their animated films. A 45-minute version of Aladdin played at Disney’s California Adventure park from 2003 to 2016, hewing very closely to the film, with just one new song from original composer Alan Menken ("To Be Free"). That version cut the monkey Abu and tiger Rajah, but retained a human Magic Carpet and an Iago puppet, operated by Jafar.

Aladdin came to Broadway proper in 2011 and is now on its national tour, with three restored songs that Menken and Tim Rice or Howard Ashman had originally created for the film, plus four new songs by Chad Beguelin. "Proud of Your Boy" is the best of the former, a traditional stripped-down solo from Aladdin (Clinton Greenspan) that delves deeper into his aspirations and insecurities. The other two, "Babkak, Omar, Aladdin, Kassim" and "High Adventure," feature three of his friends (helpfully color-coded like the Chipmunks: the red one is brave, the blue one’s a coward, the green one likes to eat) who show off Middle Eastern, Central Asian, and Bollywood-influenced dances named for themselves in the former and get into some fun swashbuckling antics in the latter, but don’t actually affect the story in any meaningful way, so it’s easy to see why they were cut for the movie.

Nothing else can touch "Friend Like Me"—it’s like a half-dozen Cirque du Soliels compressed into as many minutes, exploding with rhinestones, sequins, gold, a tapdancing Jazz Age chorus line, streamers, and fireworks, all ring-led by one wisecracking blue force of nature.

The new songs bring Jasmine (Lissa deGuzman) a little much-needed depth: She yearns to be free of the laws and expectations surrounding her in "These Palace Walls," and dreams of the life she might live if she runs off with Aladdin in "A Million Miles Away." She still doesn’t have much going on with her character besides a singular focus on defying tradition and making her own choices, and unfortunately has even less agency in achieving those things here than in the film. Aladdin and Genie get a cute little bonus number in "Somebody’s Got Your Back," and even Jafar and Iago (Jonathan Weir and Jay Paranada, the latter now a human with a parrot-like voice get a new song, "Diamond in the Rough," though it’s mostly spoken.

These are all fine, but the highlights of the show are the songs you already know and love. New verses let "Arabian Nights" create a greater air of mystique, and a quick line about how Agrabah is a mythical place where cultures from around the world gather explains the presence of so many fair-skinned people. (It’s fair to mention that the original folk tale was written by a Frenchman and takes place in China, and Disney seems to have finally come around a bit on multi-racial casting—the sultan’s British-accented "AL-lah" is mercifully absent.) "One Jump Ahead" is still a rollicking obstacle course through busy streets, "Prince Ali" still a boisterous festival. I can’t for the life of me figure out how the (now inanimate) magic carpet in "A Whole New World" flies, and the internet is pretty tight-lipped about it, too. All the little girls who came to the theater in dress-up were starry-eyed, and most of their adults were, too.

The showstopping pinnacle is, incontestably, Genie’s "Friend Like Me." Nothing else can touch it—you’ll feel like you’ve been transported to Radio City Music Hall to watch a half-dozen Cirque du Soliels compressed into as many minutes, exploding with rhinestones, sequins, gold, a tapdancing Jazz Age chorus line, streamers, and fireworks, all ring-led by one wisecracking blue force of nature. It seems impossible that one human being could have so much wit and energy, but—at least in these high moments—Major Attaway is a worthy successor of Robin Williams. His signature song is a show within a show, worth the price of admission alone.

Williams’s talents went beyond rapid-fire improv, though: When his genie brought it down, for rarer moments of vulnerability—e.g., realizing that Aladdin might wish for his freedom—the ache and wonder in Williams’s voice broke your heart. And this is the only real regret I have with the Broadway Aladdin: that it drives the heights so high, it can’t really bring us back to a space for these smaller, personal moments to land effectively. In the same vein, the ingenious way that Aladdin tricks Jafar into using his own final wish against him is a perfectly paced escalation in the film—after seeing how awful Jafar’s mortal sorcery already is, you’re given a few beats before the payoff to get terrified of what he might do with a genie’s power—but it passes by here in a split second. It seems like not even a full minute passes between Jafar’s acquisition of the lamp and his defeat. If anyone had (somehow) not seen the film first, I doubt they’d even be able to follow what happens in the climax.

This is probably a negligible complaint. This show is here for elder-generation nostalgia and new-generation wonder, and on those marks it succeeds; it’s a dazzling, heartwarming fairy tale. But there are just eight performances left, so see it before it goes up in a puff of smoke.

At the Civic Theatre through March 3