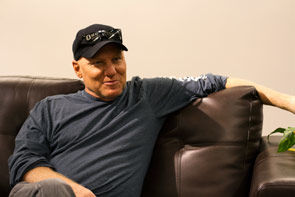 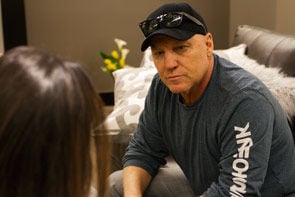 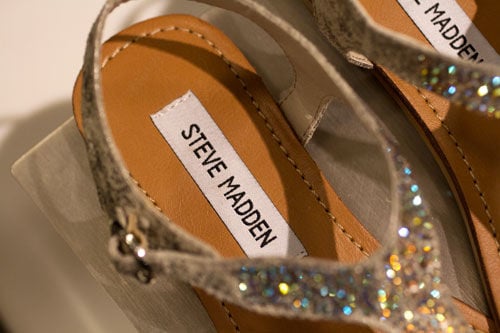 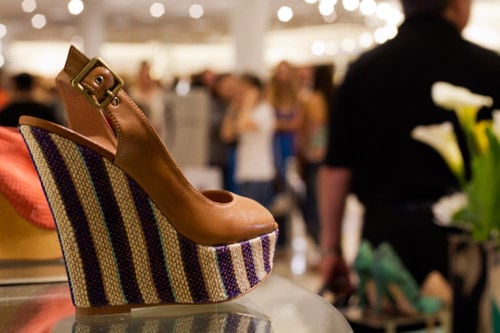 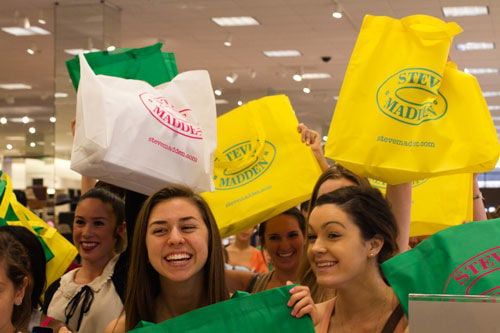 Dressed in a black baseball cap with a pair of Ray-Ban Wayfarers resting above the rim, a navy long-sleeve shirt, everyday blue jeans, a pair of worn snakeskin cowboy boots and carrying a flip phone, this laid-back New Yorker is the creative genius behind his namesake company, Steve Madden Ltd. The brand is not only a staple in every young woman's closet, it is also an internationally renowned footwear and apparel company that was named "Company of the Year" in 2006 by the Footwear News Achievement Awards.

Before meeting the crowds of adoring fans at the Nordstrom Fashion Valley meet-and-greet event on March 10, Steve Madden sat down with me to talk personal style, the best advice he's ever gotten and what's next on the horizon for his booming company.

"I’m a jeans and cowboy boots kind of guy."

TL: When did you know that this is what you wanted to do?

SM: I knew pretty quickly. I started when I was 16 and I pretty much knew then. Shoes were exciting for me, I thought it was cool.

TL: Did you study design?

SM: No, but I knew this was what I wanted to do. I started in sales and I wasn't getting what I wanted so I became a shoe designer. I figured I could create my own products. Kind of like a singer running out of songs to sing and has to write his own.

TL: How do you differentiate yourself from all the other shoe designers out there?

SM: I'm more of a shoemaker, you know? I try to make shoes that girls are going to buy. I try to make it easy for them to buy and I try not to get too tricky.

TL: Who have been your greatest mentors along the way?

SM: I’ve had so many mentors, but they don’t last very long. My first mentor was my dad. Then along the way, mentors sort of never can live up to expectations. I’ve had a few, but now I’m a mentor myself, so it’s weird. But the mentor-mentee relationship is rather complex, everyone is sort of looking for their father, don’t you think?

TL: That's a very interesting point, do you have any children of your own?

TL: The success of your company seems to be on an exponential curve--With what season/item/moment, etc. did you realize you were becoming a household name?

SM: (laughs) Wow, well I guess it’s not something where you wake up and think, 'Whoa, I’m a household name now,' it just kept getting bigger and bigger. We resonate with the consumer because we really care about them. I think that registers with them so we have quite a following. People just love our products, it’s really nice, really nice. One of the great things about doing these personal appearances is that it reminds me that people really dig what we do, and that really feels good. In business, you’re not with these customers a lot, but then you get to see them and it’s great. We work hard at it. I have a great team, but I do have my hand in everything.

TL: Do you have a favorite piece from your own designs?

TL: How would you describe your personal style?

SM: I’m not very… stylish. I’m a jeans and cowboy boots kind of guy. Actually I look kind of fruity today (gestures to his navy blue long sleeve shirt)… this for me is a lot of colors going on.

TL: Any favorite designers that you look up to?

SM: I’m a big fan of any artist that is able to merge commerce and art together and do it well, whether it’s George Clooney or Richard Pryor or Calvin Klein. I’m a fan of that because it’s so hard. It’s easy to be obscure, believe it or not, or the opposite, like how some things are so popular with no inherent sort of artistic value--sort of like that Desperate Housewives show, but my wife loves them so don't tell her I said that. Anyway, the trick is to be able to do both.

SM: It’s great here, this is a great place. Anybody who lives here is lucky. Lot of sandals all the time, it’s really cool.

TL: How many pairs of shoes do you own?

SM: Not a lot, I wear Steve Madden and I wear cowboy boots made by this guy in Hollywood that makes boots for Guns n Roses and Def Leppard. I never wear sneakers.

TL: Never sneakers? Even at the gym?

SM: Oh I work out, but I work out in engineer boots.

TL: What trends are you looking forward to for Spring?

SM: There’s a lot going on for Spring. I’m interested in sandals, cool new kinds of sandals. I’m getting a little bored with some kinds of footwear, excited about others. I’m excited about Western, which you can see by the boots I’m wearing today. These are from the Hollywood guy.

SM: Hm, crocs? No, I actually think Crocs are cool. My kids wear Crocs. But it’s those Sketchers Shape-Ups. Those make me want to throw up! Those tighten-your-ass sneakers? It’s fake, it’s a scam. If you want to tighten your ass, you’ve got to get in the gym and you’ve got to work. Or, you need good genetics, which is really more important than anything, unfortunately (laughs). But you can impact it in some ways. Got to work those glutes!

TL: So no Steve Madden Shape-Ups coming down the pipeline anytime soon?

SM: No, they tried to do that to me! When those shoes were at its peak. But I rejected it.

SM: Oh, that’s such a great question. (pauses) That’s the best question I’ve ever been asked, by the way. I guess the best piece of advice is to as a leader, to always lead with your strengths. Don’t try to be who you’re not. And as a businessman, to know what you don’t know. Because then you can not waste a lot of time and you can get people to do what you don’t know how to do. Sometimes people find themselves at the head of a company and feel like they need to be an expert in all matters. For me, I’m not terribly interested in reading balance sheets. I’m a shoe man, you know? So I have people do that for me. If you don’t know something, you feel like you’re in the position to learn everything but you don’t have to know everything. You make great shoes, and you have to hire someone to do the other things for you. So that’s the best piece of advice I’ve ever gotten. I hired some great financial people and I took care of the designs.

SM: We'll probably expand around the globe and do some more categories. We are currently in over 46 countries worldwide. I'm excited about two locations that we opened and I haven't been able to go to either. One is Dubai and the other is Isreal. Both countries dig our shoes and I'm proud of that. Who knows, maybe there will be peace in the Middle East with Steve Madden shoes (laughs).

TL: Where are you when you're not traveling for work?