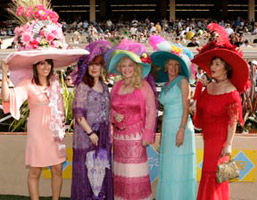 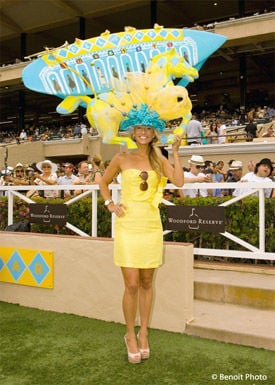 Get your floppiest, biggest, and brightest hats ready, the Del Mar Racetrack is kicking off their 75th season of horse racing on Wednesday, July 18th.

Thousands will travel to Del Mar to partake in the festivities and uphold the traditions that founder Bing Crosby first started in 1937. Of course, one of the most popular traditions is the

One and Only Truly Fabulous Hats Contest

. Whether you are an onlooker, a better or a full-blown mad hatter, here are 5 things you probably didn’t know about this fashionable tradition:

1. This year, the contest has added to the usual 4 categories: Best Racing Theme, Funniest/Most Outrageous Theme, Most Glamorous and Best Flowers/other, and now include a brand new category, Best Fascinator. For the fascinators, which are elaborate headpieces or large hairclips or bands, there will be a sole winner who will receive $100. For the other four categories first place wins $300, second receive $200, and third will get $100. Each winner of each category will be compete to win the best hat overall, which this year will receive two roundtrip airline vouchers to anywhere in the U.S.

2. The One and Only Truly Fabulous Hat Contest was officially started in 1995 by Julie Sarno, who believes that "no outfit is complete without a hat", and she continues to coordinate the event each year. San Diego Hat Company is the official sponsor of the event this year.

3. Last year’s grand prize winner, 29 year old Katy Helen, actually put together her hat together the night before opening day. This year will mark Helen’s 4th year competing in the event, and if she wins, it will be her third prize in a row, also know as a hat trick.

4. Last year, Saura Naderi started the program, "The Hat Project", which introduced young girls to engineering by pairing them up with UCSD engineering students to teach them how to construct race inspired hats driven by electronics. The 6 week, hands on engineering program all lead up to the coveted Del Mar Hat Contest, where the girls debuted their intricate and gear driven hats. Some of the designs the girls made included moving figurines telling the story of goldilocks and the three bears, and also a hat that opens up to reveal a horse dancing on a stage.

5. The hat tradition began on the very first opening day on July 3rd 1937, when Bing Crosby personally greeted guests wearing a hat as they entered the racetrack. Because hats were an everyday thing back in the 30’s and virtually everyone wore them, wearing hats is now one of the most popular traditions and now brings unforgettable and innovative fashions to the racetrack each year.

Want more fun facts about the races? Read about the Track Stars from our July issue.