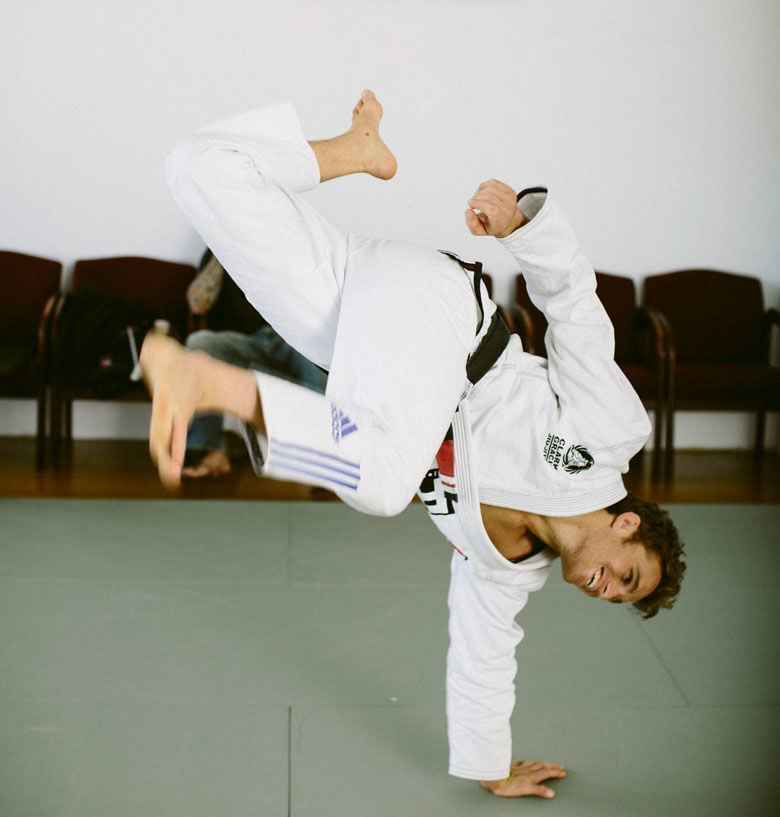 Instructor Clark Gracie at his jiu-jitsu studio in Old Town 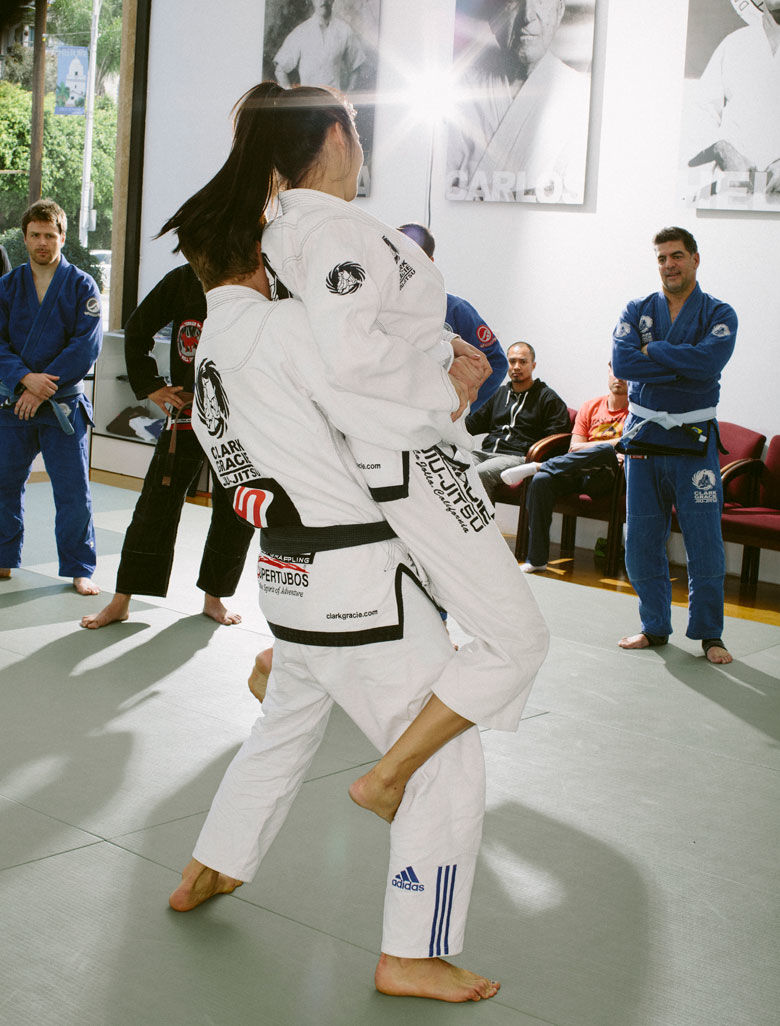 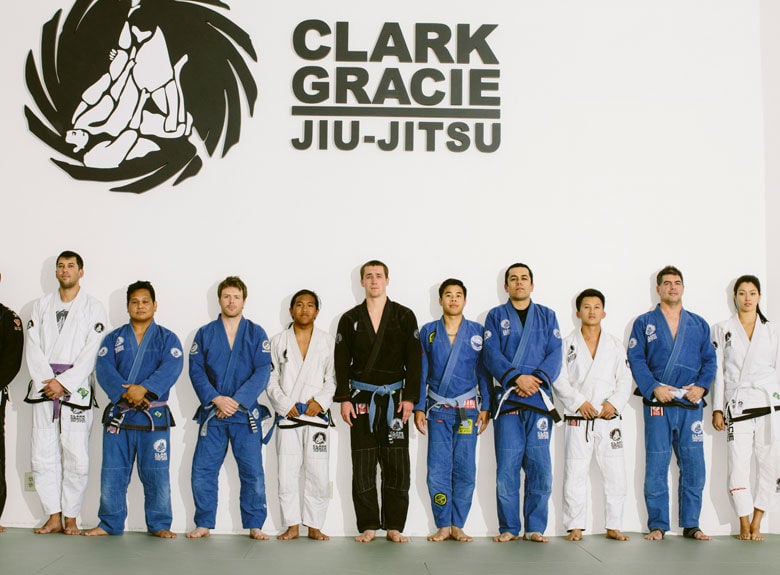 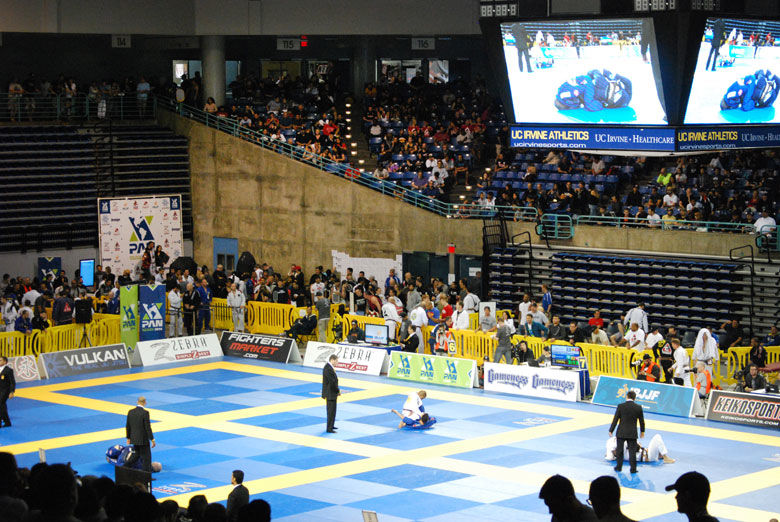 The 2014 Pan Jiu-Jitsu Championship in Irvine 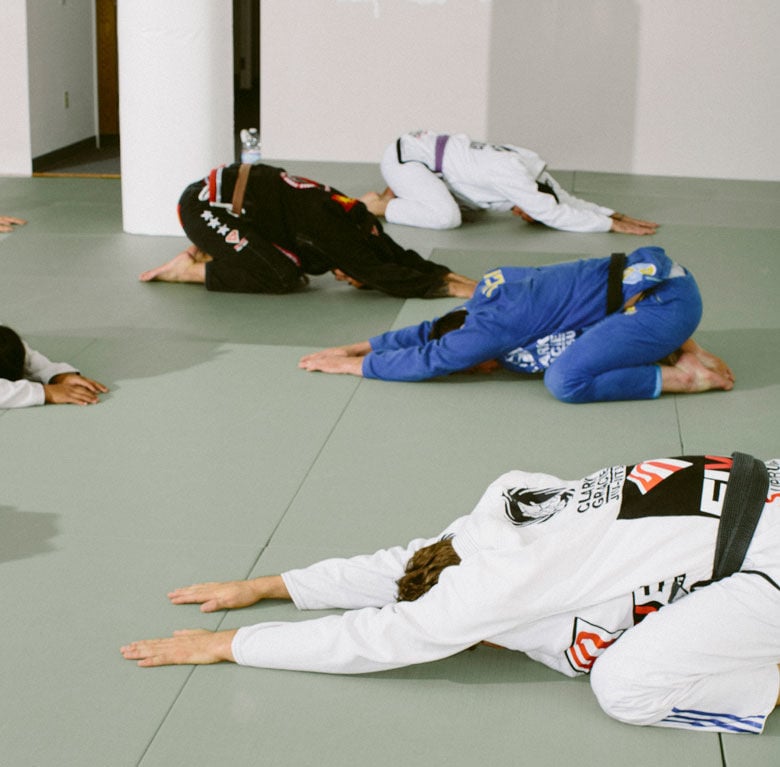 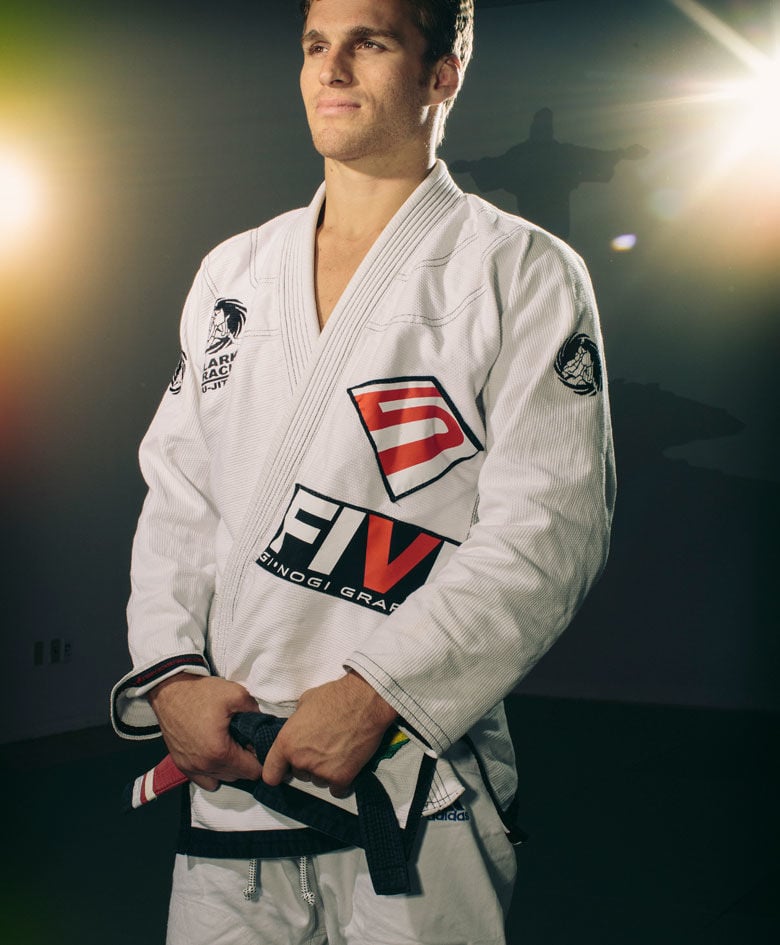 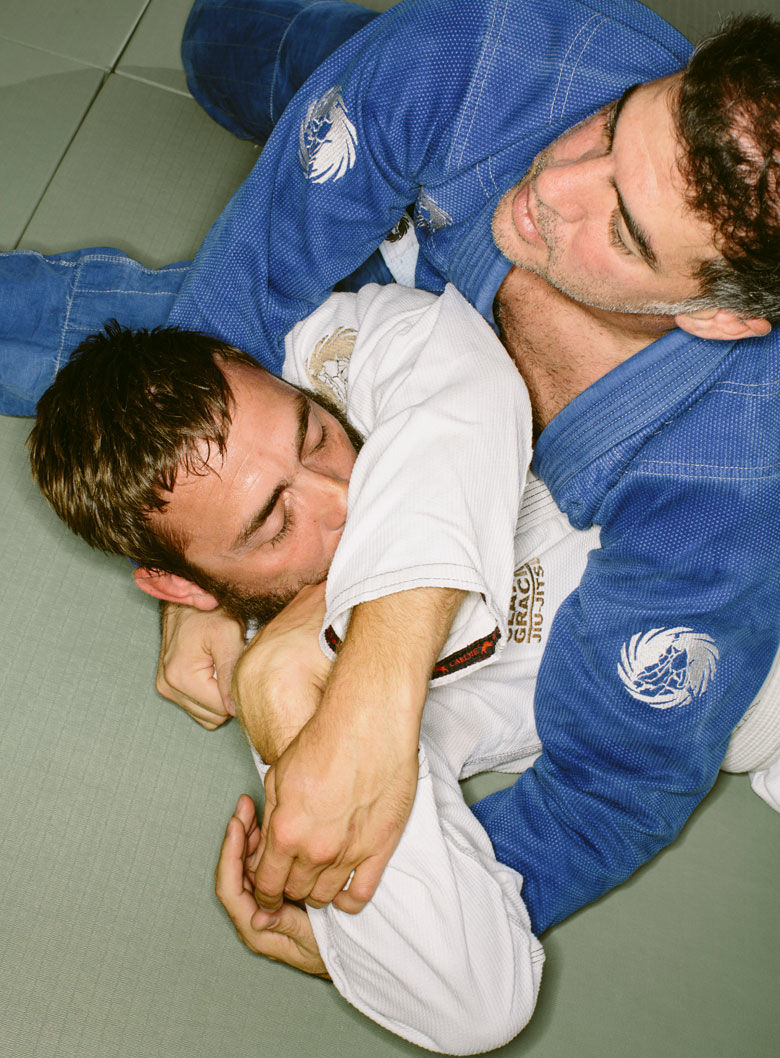 Instructor Clark Gracie at his jiu-jitsu studio in Old Town

It would take about 10 seconds for Clark Gracie to cut off the blood supply to my brain and knock me unconscious, but a second is all I need to feel helpless and out of breath at his Old Town jiu-jitsu studio.

To be fair, I have asked for it, and Clark thankfully spares me the humiliation of ripping my plaid dress shirt in front of his students by urging me to throw on a uniform—the top of the jiu-jitsu gi, at least—so he can properly execute the collar choke.

Clark is a powerful man but also warm and pleasant. He humors me with a you’re-going-to-regret-this smile when I ask him to choke me again, and soon I find myself tapping his elbow for mercy. The Gracies have been teaching this exercise to stubborn men for decades. Clark is carrying on an athletic tradition that his family brought to the United States in the early ’70s.

Over the last decade, the jiu-jitsu scene has exploded in San Diego. Once home to only a few studios, the city now boasts more than 100, many owned by world-class jiu-jitsu fighters and teachers. Among them are Clark, who has two studios in town; Andre Galvao; and the Nogueira brothers—twins Antônio Rodrigo and Antônio Rogério, who rank among the sport’s most decorated and devastating Ultimate Fighting Championship mixed martial artists.

As I visited studios in San Diego and watched some of the world’s top fighters compete at the International Brazilian Jiu-Jitsu Federation’s Pan tournament in Irvine this spring, I heard again and again that San Diego was the sport’s "mecca" in the United States.

"Everyone would rather go to San Diego than anywhere else," says Saulo Ribeiro, a Brazilian-born world champion who trains top-flight fighters at the University of Jiu-Jitsu in Point Loma and trained with the Gracie family in Rio de Janeiro, the birthplace of the technique. "There are many similarities to Brazil: the beaches, the surf, the lifestyle. The geography is perfect."

"No matter where you train, you’re walking into a family. You’re accepted without question."

The history of jiu-jitsu goes back much farther than Rio—and it didn’t even start in Brazil. Historians have credited Buddhist monks in India circa 2000 B.C. with developing the martial art to disarm and disable attackers without inflicting serious harm.

The Gracies have not been shy about proclaiming that they perfected jiu-jitsu after traveling Japanese fighters introduced the sport to Brazil just before the first World War. Although there has been some dispute among the Gracies about who imported their brand of jiu-jitsu to the United States, Clark’s father, Carley, technically owns the rights.

"I’m the one who brought Gracie Jiu-Jitsu to the United States," Carley tells me. "It’s going all over the world."

Carley is charming and funny and terrifying at the same time, exuding the confidence you’d expect from someone who has been making grown men cry "uncle" for four decades.

Marines in charge of the American consulate in Brazil persuaded Carley to come to the United States and teach the technique to soldiers, who could use it to defend themselves in hand-to-hand combat. He trained fighters on the East Coast in the ’70s before making his way to California and settling in San Francisco, where he still teaches today. He flies to San Diego as often as he can to visit Clark and his brother, Ralston, whose careers are taking off.

"There’s a big competition scene here," Ralston explains. "If you want to succeed, it helps to surround yourself with people working toward the same goals. It’s natural to want to be healthy here. It’s the right scene for it."

But you don’t have to compete to enjoy Brazilian jiu-jitsu. Many of the students in San Diego’s studios are there to learn self-defense while getting in a good workout. It’s also safe for kids, who can start training at five years old.

The 2014 Pan Jiu-Jitsu Championship in Irvine

Brazilian jiu-jitsu is sometimes confused with its brutal cousin, mixed martial arts, because many MMA fighters have added the former to their arsenals. There’s a good reason for that: If you choke your opponents out or crank their limbs into a painful position, as practiced in jiu-jitsu, they have no choice but to submit.

But in its purest sense, jiu-jitsu is a peaceful sport—a metaphor, in some measure, for life itself. If you push too far too fast and go for an opportunity that isn’t there, you’re guaranteed to fail. If you’re patient, if you’re willing to endure the struggle and wait for the right move, the right moment, you’ve got a shot at winning the round before you have to grapple again in the next.

Strategy, not strength, is at the core of the sport, and it’s easy to see how powerful it is when a fight goes to the ground, erasing the advantages of height and weight.

"It’s like chess with your body," explains Zarah Shaw, a family friend of the Gracies who started training last year, when the TSA decided to allow pocket knives back on to airplanes. Shaw, a flight attendant, wanted to be prepared for anything, but for her and many others, jiu-jitsu is a mindset, and an inclusive community that stretches far beyond San Diego.

"No matter where you train, you’re walking into a family," Shaw says. "You’re accepted without question."

Shaw considers herself a jiu-jitsu ambassador, and not just because of her longstanding relationship with the Gracies. She wants to see more women take up the sport.

Women like Kyra Gracie—Clark’s distant cousin—are competing at a high level, but it’s taken time for them to carve out their place. Many are just now getting aquainted with the sport.

Recently, Clark taught a free women’s self-defense class at the Handlery Hotel in Mission Valley. The goal was twofold: to teach self-defense, of course, and to show the students that even basic jiu-jitsu techniques can ward off a much larger aggressor.

"They teach you how to break out of a bear hug and how to get away from an attack," Shaw says.

The classes and fights typically end peacefully, and the Gracies have fostered a sense of mindfulness and dignity within the sport. For instance, jiu-jitsu even has its own set of commandments, pushing the mental component even further:

"Be just as enthusiastic about the success of others as you are of your own."

"Forget about past mistakes and concentrate your energy on the victories of tomorrow."

"Be so secure that nothing can disturb your peace of mind."

Taken as a complete mind-body package, it’s no wonder San Diego has become a hub for this emerging sport. These simple edicts seem fitting for a town that is as passionate about its trails and beaches as it is about its yoga and meditation. For many jiu-jitsu enthusiasts, it’s a pursuit of personal growth. Shaw says, "You learn humility. You learn you can leave all your troubles on the mat."