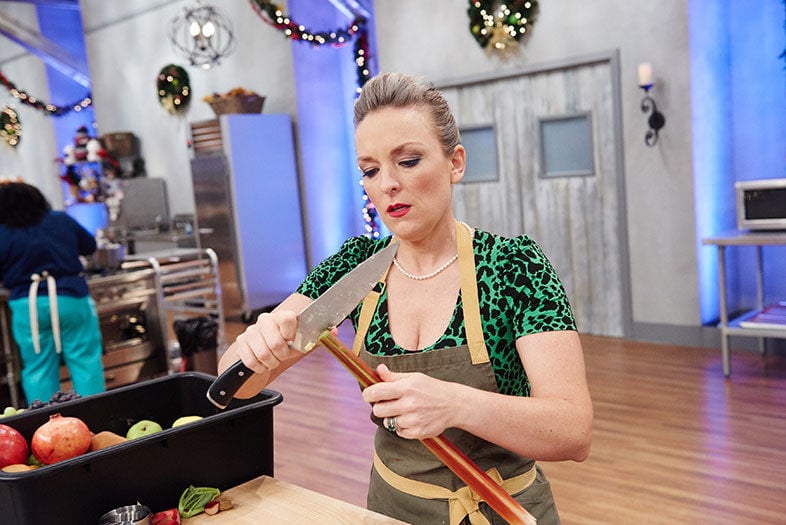 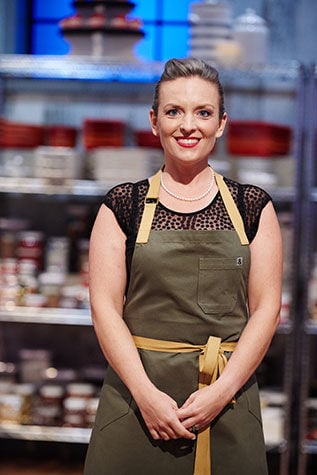 It’s a Friday in December at Sugar and Scribe Bakery in La Jolla, and the lunch crowd is buzzing with holiday spirit. Owner Maeve Rochford, 36, is easy to spot, with her long, blond hair pulled back into a braid, and a chef’s jacket with her name and title, Executive Chef, on it.

With two episodes left of this season’s Holiday Baking Championship on Food Network, Rochford is one of four contenders still in the running for the $50,000 cash prize. She’s come a long way since 2010, when she started Sugar and Scribe with one employee and $130 in her bank account.

"If we didn’t make rent by the end of that first month, the doors would close," she remembers. "I now have 37 employees. And my rent is more than what I made in the first six months of being open."

Baking is in her genes. Her Irish grandmother cooked for British royalty before moving back to Ireland, where she fell in love and had nine children. Rochford’s mother was the oldest.

"With nine kids, the art of baking had nothing to do with cake. It was a way to feed people. Bread is the fundamental thing that any culture has used to survive famines, and that’s where my mother started," says Rochford. "I think the love of food came after, when having blueberry pie for Christmas was the best present that you could offer little kids. It’s in our blood to feed each other. So that’s where I ended up."

Rochford was a competitive rower from seventh grade through college, and describes herself as a "super competitive person." And in any competition, she goes all in. In an especially memorable moment from the second episode of Holiday Baking Championship, Rochford’s attempt at making a decorated holiday trifle falls shorts, and when facing the judges, she’s unable to keep from crying. What she didn’t expect was the positive effect that moment would have on her.

"My worst nightmare was that I would be completely ashamed of something I did. And then when it came true, it freed me to search deeper in my soul and find a way to show myself and the judges that I am made of so much more," she says.

And if anything, being on the show has made her love of baking stronger.

"I do it because it’s the only thing I believe in. Baking is the only thing that can wake me up at two in the morning after getting no sleep and with every muscle in my body hurting, and I will still come to work with a smile. I love it. There’s nothing on earth, or any amount of money, that could ever pull me away from being a baker."

During the holidays—which Rochford calls "anarchy season" at Sugar and Scribe—there is one ingredient she swears by: "Chutney. If you don’t have enough apples, throw them in chutney and you can still make a whole delicious pie. If you have overcooked your pork tenderloin, don’t freak out, dab some holes in it, throw some chutney in, and everyone will think you’re fabulous and crafty. Maybe the kids have had too many cookies, but you want to give them something interesting—pour chutney over ice-cream. You can bake it into bread pudding, or you can do it as a side by itself. And it doesn’t have to be cranberry. There is pear chutney, orange chutney, even mixed fruit chutney. As long as you have that one core basic, it can go sweet, it can go savory, and it can go by itself. Then you will be amazed at how fast you’ve accomplished ten different things."