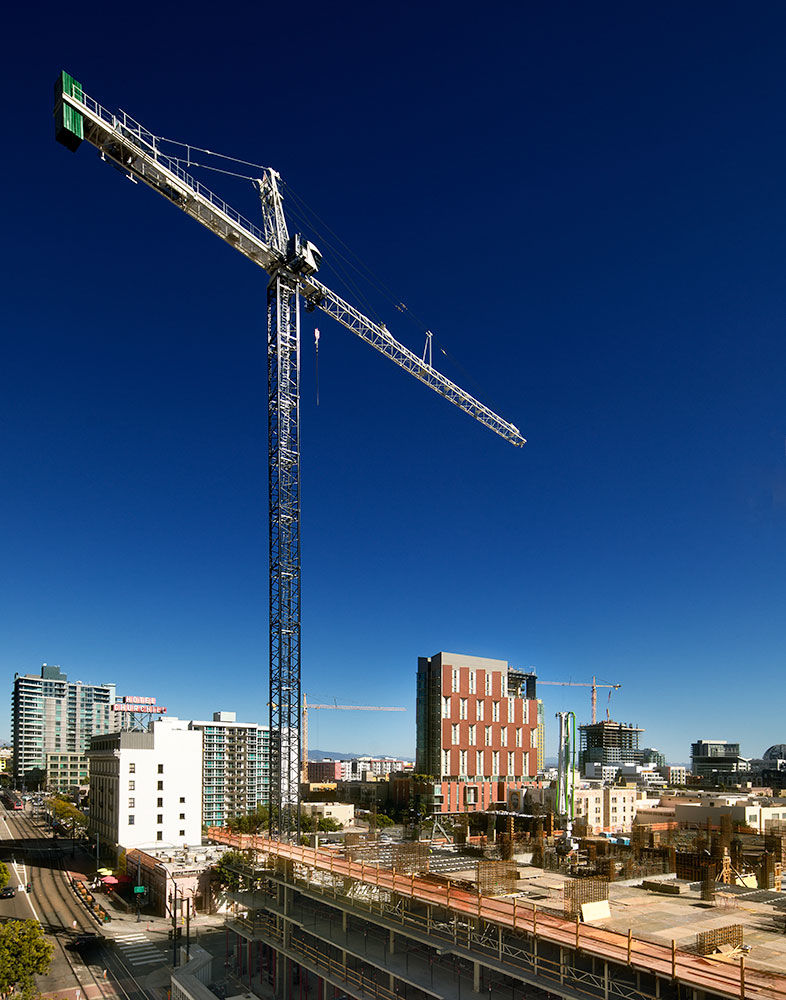 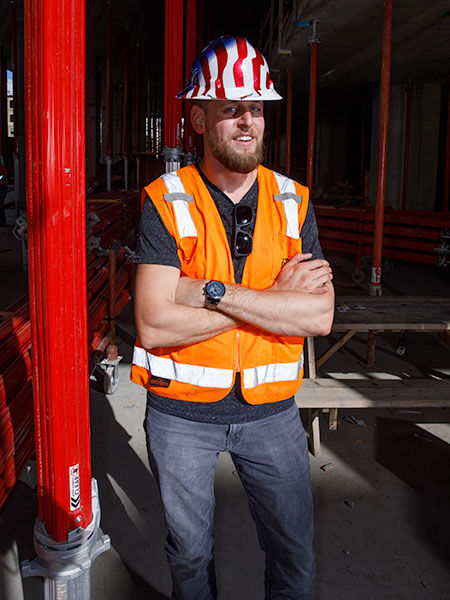 At six-foot-six, tower crane operator Shane Schroedel squeezes into a cab so snug, he can touch both sides with his elbows. He climbs 160 feet every day to work on a residential building downtown. As it rises over the next two years, Schroedel’s crane will rise with it, to 540 feet above street level.

The steel crane leans backward because of counterweights in the rear. "If you stand at the base, you can see it’s curved like a bow. They’re designed to flex and move and sway," Schroedel says. "In Boulder, Colorado, I was in winds in the mid-90-miles-per-hour range. That’s pretty eye-opening. But the biggest fright for operators is lightning. We’re on a giant metal stick in the sky. If you don’t climb down before the storm comes, you have to stay."

At the start of each shift, he ascends with a 25-pound backpack carrying his breakfast and lunch—no harness, no sweaty palms. A triathlete in his off-time, Schroedel can make the climb in three to four minutes, while most crane operators need 15. "It’s a nice morning cardio," he says. "But then you sit and don’t move for 10 to 12 hours a day."

To control the crane, he uses two multidirectional joysticks. The left hand rotates the crane clockwise and counterclockwise. The right hand controls the trolley that slides the hook out on the jib, which is currently 180 feet long but will extend to 220 once the crane is higher. The heaviest load he lifts are bundles of rebar, which can weigh up to 19,000 pounds. He communicates with riggers and signalers on the ground for each of the different trades, like electricians or carpenters. "There’s always a lot of fighting for crane time. These guys now are very polite. Everyone needs to get their things done. That’s when a speedy operator becomes very valuable."

"You need superior focus all day long," he adds. "You can’t have an off day." A crane operator could crush someone or squeeze them against a column if the operator doesn’t control their drift. "It’s easily avoidable when you’re paying attention, but you can’t control people on the ground."

Schroedel says a lot of crane operators don’t make it past the first year, and the stress has been compared to that of an air traffic controller.

Ever since he was a child, Schroedel has been drawn to heights. "If my mom wasn’t watching me for 10 minutes, I’d be 60 feet up in a pine tree. I was that kid." At 12, he fell in love with high-level rock climbing. His first job was in construction, which led to his interest in cranes. He’s been an operator for a little over five years, living full-time in a different state every year, with short-term work in at least seven or eight other states. Schroedel came to work in San Diego last August and, just like everywhere else, onlookers are fascinated by his job and have the same questions, like what does he really do up there?

He’ll eat his two meals, and when nature calls, he’ll go in a bottle. But as for number two? "The best option is, just don’t," he says, and avoids certain foods during the workweek. "Most people learn the hard way the first year."

There is no coming down until the end of a shift. "The worst is climbing down and realizing you forgot your car keys."

Crane operators can’t avoid downtime, especially at the end of a project when there are just two or three lifts over a 10-hour shift. "It’s in your best interest to have an unlimited data plan," he says. "YouTube is your best friend." He also has a lot of time for self-reflection. "I meditate sometimes. People think a crane is not a calm place; I’m a strange human being."

He considers his favorite views to be "either the city of San Diego and Coronado skyline on a good sunset evening, or downtown Denver with storms rolling in, looking at the mountains. All tower crane operators are also part-time sunset photographers." In addition to the horizon, he enjoys watching the Navy ships come in. Some crane operators bring binoculars and look at birds. But, Schroedel says, "The birds look at me."

On previous jobs, he has spent up to 16 hours per shift in that small cab.

From his current vantage point downtown, he can see Tijuana; once the crane goes higher (as the tower grows), he’ll see Pacific Beach and La Jolla.

Schroedel has petted pigeons and fed hawks (i.e., tossed them turkey from 10 feet away).

He gets an eyeful of fights and car accidents. "Last week I saw five people get arrested in one day."

He sees a lot happening on the street, but he also gets watched. In Denver, reps at a medical device company approached him at the end of a shift. They said they watch him all the time and had questions. They invited him to lunch at the office on a Saturday. Schroedel expected 10 people to show up. 150 people came.

Being hungover does not help with focus. He hasn’t had a drink of alcohol this year; his consumption has been minimal for two years (except during Oktoberfest in Germany last year).

On the day of the San Diego Magazine photo shoot, Schroedel believed the work site was clear. However, two workers were still there and ended up telling the whole site. For the article, the iron workers suggested the title "Shane the Crane" or "The Hunk Behind the Hook."