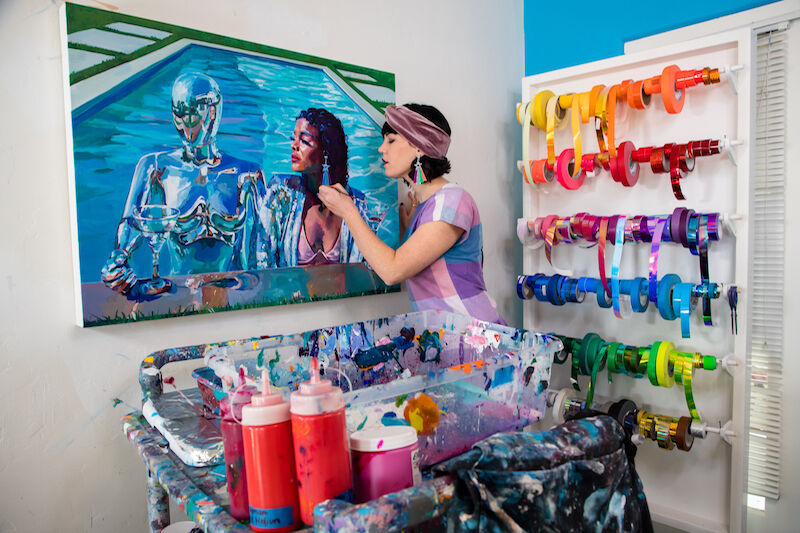 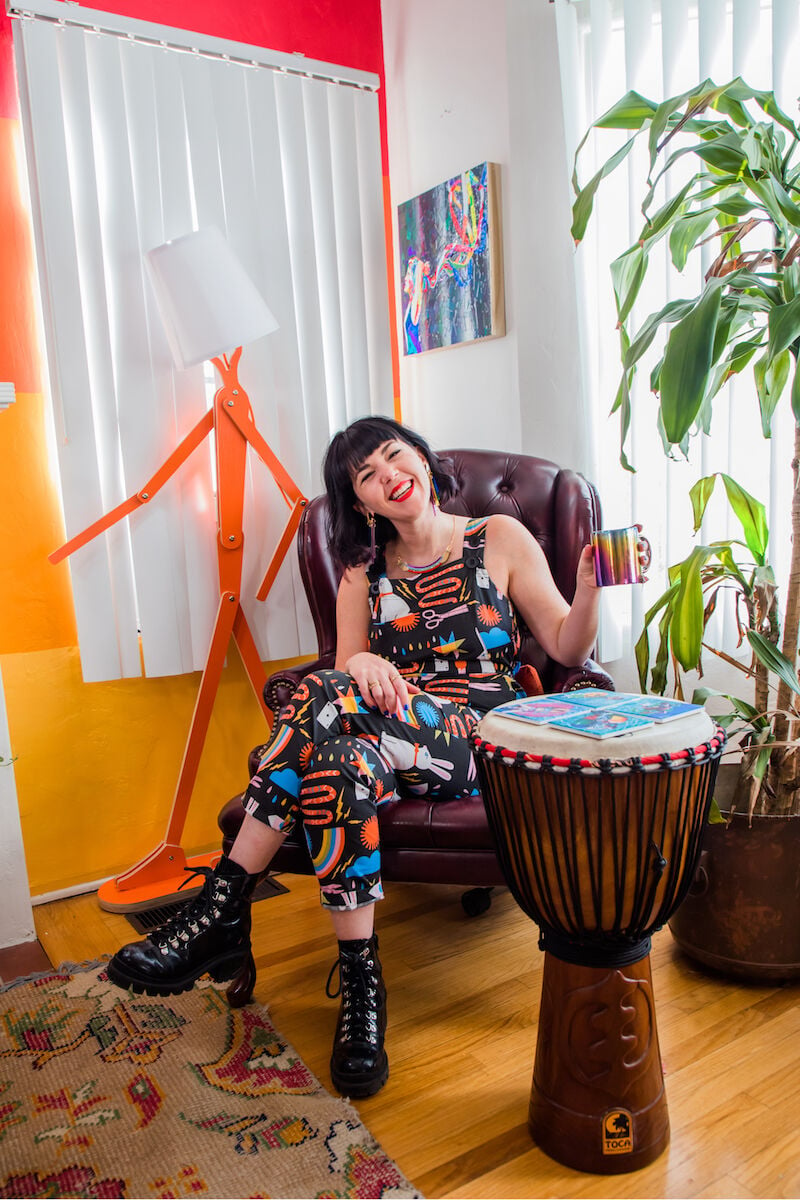 Sarah Stieber never meant to bring her work home. For the past ten years, it was crucial that the multimedia artist do her creating in North Park’s Art on 30th and then leave it behind as she stepped into her North Park home. But that was before the pandemic, and studio space was getting expensive, so she decided to join the ranks of those working from home.

Working from home can feel pretty drab—unless your place looks like hers. Every single wall in her house is covered with paint or colored tape, a medium she’s been experimenting with recently. There are walls doused in different shades of turquoise from past mural projects, painted clouds on a door, and even an eight-foot-tall crate to hold all her different shades of tape.

“It’s like rainbow art everywhere,” she says. “Organized chaos, for sure, but it’s a happy place.”

It also represents the state of mind Stieber has been living in for most of her career as an oil and acrylic painter. She developed her signature style, which she calls “electric realism,” early on, using vibrant colors to create emotive paintings of joy, confidence, and social justice. Beyond canvas, she’s created murals, videos, and most recently, put out a jewelry collection inspired by some of her past work.

Playing with other media was a natural move for Stieber, whose artistic process involves detailed photo shoots with models, props, and elements that inevitably inspire or contribute to the idea she has for a painting.

"Nothing needs to be the way that the art world or society tells you it should be. It all should be intuitive; that’s it."

“Doing these photo shoots allows me to create the world that I’ve envisioned and, as a result, get a ton of detailed imagery to use as references,” she says. “I’ve also learned that each photo shoot becomes an art performance piece itself. A lot of my work is inspired by the personal stories of the models I work with, so it’s also special to me to work with them and honor their stories.”

If it sounds like Stieber never stops creating, it’s because she probably hasn’t. Even amid the pandemic and the country’s racial unrest, she was able to channel the overwhelming weight of her thoughts into her work, spurring her to have one of her most productive years yet—in 2020, she averaged one painting every two weeks. “Making art was a huge coping mechanism for me,” she says.

It also allowed her to make space for those who inspire her most. While her works have always explored themes of social justice, the killings of George Floyd and Breonna Taylor sparked a greater compulsion to step back and analyze her role as an ally and ways she could help through her art. Stieber painted a portrait of author and social activist Rachel Cargle, a personal hero of hers, as a way to privately process what was going on in the country at the time. “I needed to make that to cope, personally, but from a public perspective I felt like it wasn’t my place as a white artist to try and portray the pain of Black people.”

When she did inevitably share the portrait, it immediately caught the attention of Cargle herself, who then flew out to meet with Stieber and collaborate on a few projects. She says she’s done a lot of careful thinking about the distinctions between “what I’m making to express myself, and what I’m making to share and communicate and uplift others.”

Making art more accessible to everyone has always been important to her. When she’d run her summer pop-up galleries, she’d be the one in the gallery talking with people and selling her own work. And when the industry convention of elusive pricing didn’t make sense to her, she put the prices on her website and even offered a payment plan for interested buyers.

It’s not the standard way of doing things, but it’s Sarah Stieber’s way, and it’s what works for her, for now. “COVID gave me such a perspective shift and made me realize that things are just the way they are and not the way they need to be or always will be,” she says. “Nothing needs to be the way that the art world or society tells you it should be. It all should be intuitive; that’s it.