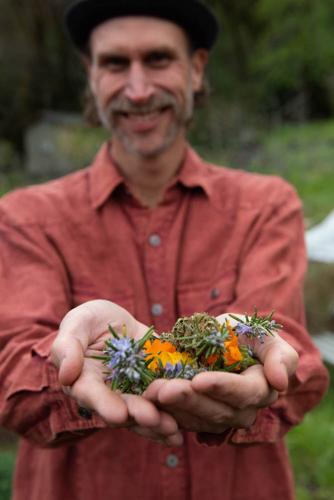 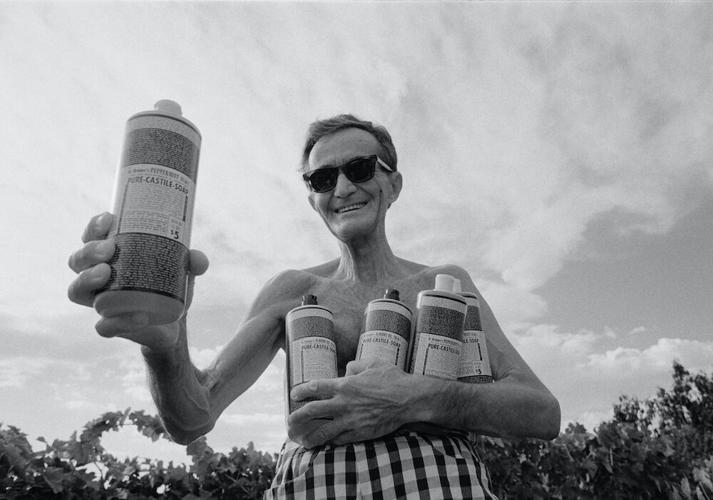 The “OG” Bronner—Emil, who founded the company in 1948—passes out the company’s pure-castile soap

It is arguably one of the most far-reaching philosophical and political forces San Diego County has ever harbored. It has fought for fair pay, fair trade, criminal justice reform, drug policy reform, community betterment, regenerative organic agriculture, animal rights, and personal hygiene.

Specifically, the soap sold on the side by Jewish immigrant Emil Bronner as he gave rousing public speeches about unity in the 1950s. He soon realized people loved his soap but didn’t stay for the sermon. So he printed it on the soap wrapper and—well, that little peppermint-scented bar with ideas about how to be better people became a global icon of brand-based social activism, a sort of proto–Ben & Jerry’s for the shower caddy.

So it surprises absolutely no one that, in April, Dr. Bronner’s will release a special-edition soap to raise awareness for sun-grown cannabis and regenerative organic agricultural processes to combat climate change.

“[In 1997] I got to a point in my life where I was really appreciating what my granddad had done and how my parents were running the company,” says David Bronner, CEO (Cosmic Engagement Officer), of his decision to get involved with his family business after graduating from Harvard with a degree in  biology. “I saw an opportunity to leverage the business for social and environmental good, so one of the first activist things we did in 1999 after I stepped in was look into conducting blind customer trials with hempseed oil in the soap.”

Back then, Bronner was drawn to hemp because of the activism around the plant, which is the same species of Cannabis sativa you’d find in a dispensary, but a different cultivar that doesn’t produce the intoxicating compound THC. In other words, hemp can’t get anyone high, so why would anyone outlaw it?

Bronner felt passionately that the War on Drugs was a racist, failed effort that destabilized the world and created “out of control” drug policies in the US—and that the illegality of hemp “is one of the most absurd examples of the whole hysteria.”

Hempseed oil is also rich in omega-3 fatty acids, which is great for soap: It alleviates flaky, dry skin and smooths out a lather, making it more sudsy and less drying. Bronner saw hemp as a way to reorient his family’s company with activism.

So in 1999, Dr. Bronner’s became one of the first body care brands to include hempseed oil in its formula. Four years later, it was one of the first to gain USDA National Organic Program certification for its soaps, lotions, balms, and other products. Both of those endeavors resulted in high-profile litigation: against the DEA (when they seized hemp oil imports from Canada) and the USDA (when they stopped certifying nonfood products as organic). Bronner raised the visibility of his argument by locking himself in a cage outside the White House and calmly harvesting hemp and milled hemp oil (firefighters eventually cut open the cage with a chainsaw to facilitate his arrest).

Dr. Bronner’s won their suits against the government. Since then,  both Bronner and the company have been intimately involved in activism for GMO labeling, industrial hemp farming in the US, organic and fair trade standards, a fair minimum wage, and cannabis reform.

Most cannabis is grown indoors, which requires exceptionally high energy input. To illuminate the problem, in 2019 Bronner started a nonprofit cannabis company called Brother David’s. Its proceeds support the Sun+Earth certification program, which certifies cannabis grown in more sustainable soil conditions by companies with high labor standards that also engage with their communities.

“You look at a forest, there’s not a whole lot of synthetic inputs—it’s all self-regenerating,” Bronner says. “So how do we replicate a farming ecosystem that looks like a natural ecosystem? How do we provide all the food, fiber, clothes, materials, and soaps and build industry in a way that is regenerating the land and helping farming communities thrive? How do we disrupt the story of industrial agriculture?”

The special-edition soap’s launch this spring will coincide with a months-long campaign dedicated to the Sun+Earth program. Dr. Bronner’s also remains significantly active in psychedelics policy and research, and it recently added free physician-assisted ketamine treatment as a mental health care option for its employees.

“These plant medicines have been crucial in shaping my moral character,” Bronner says. “My dad and granddad weren’t psychedelics or cannabis users, but they did found this company and established rigorously ethical values within it.”