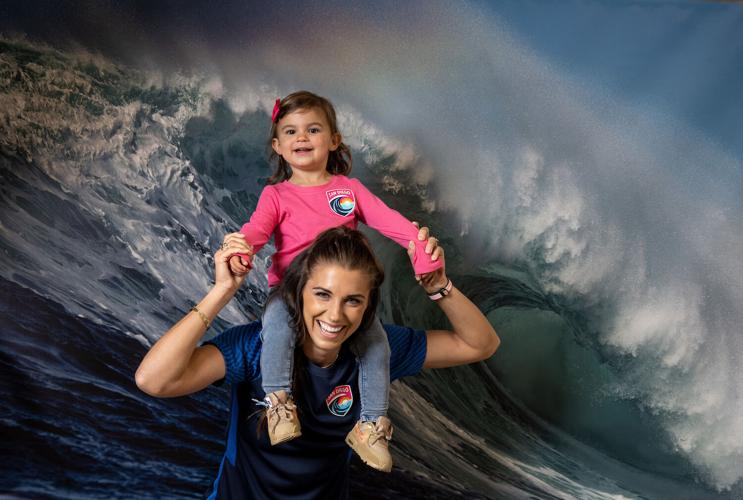 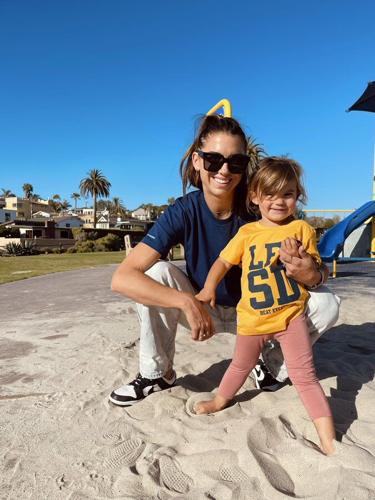 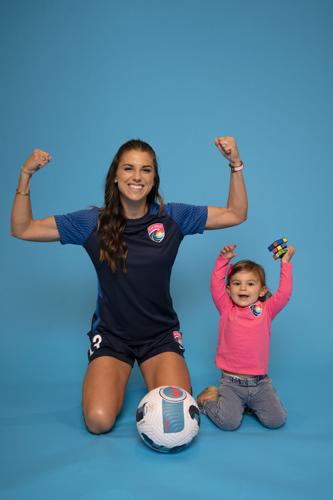 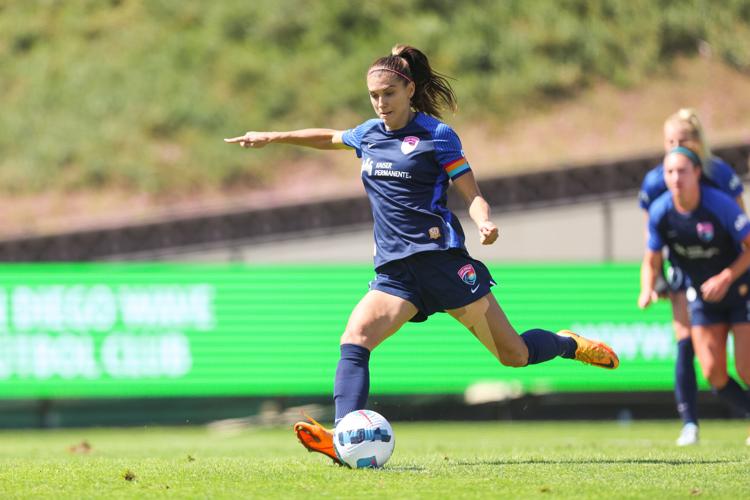 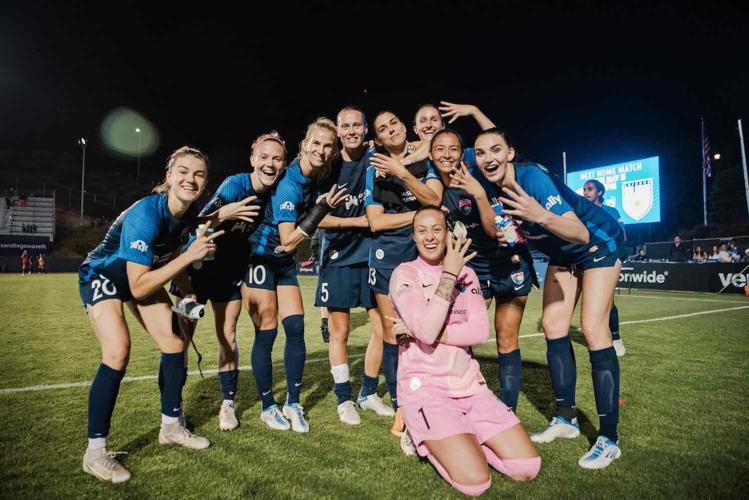 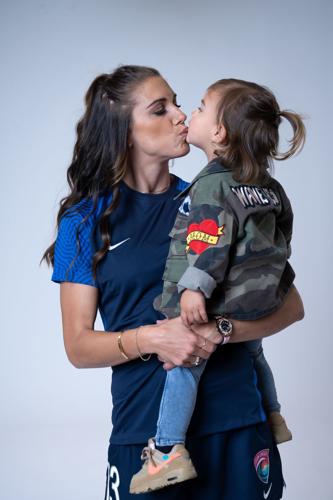 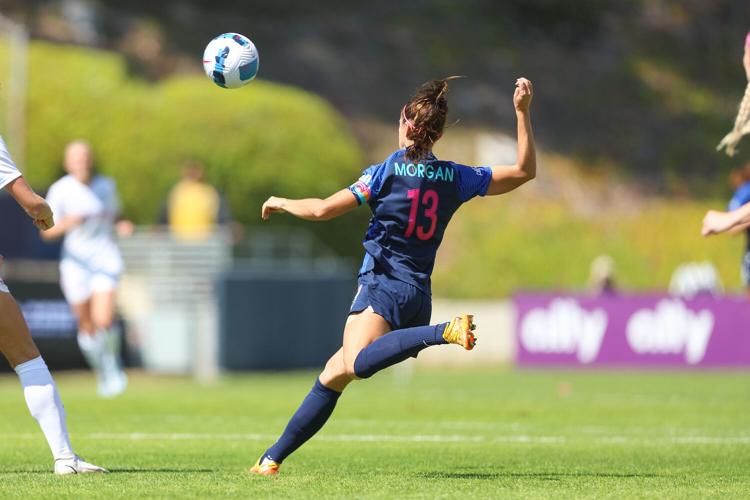 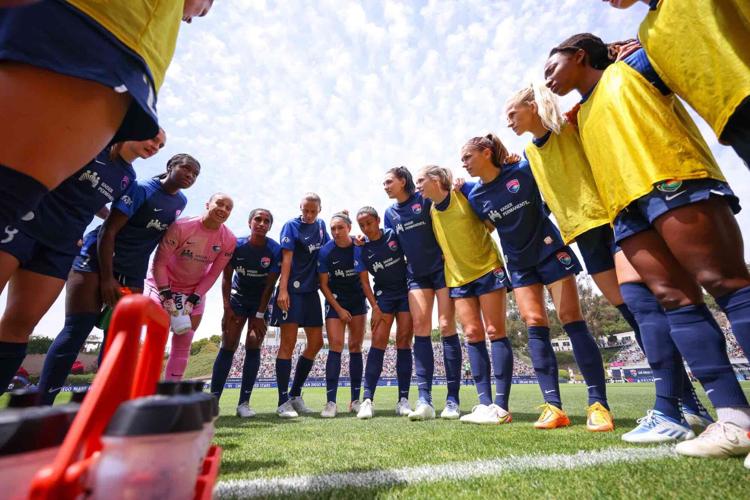 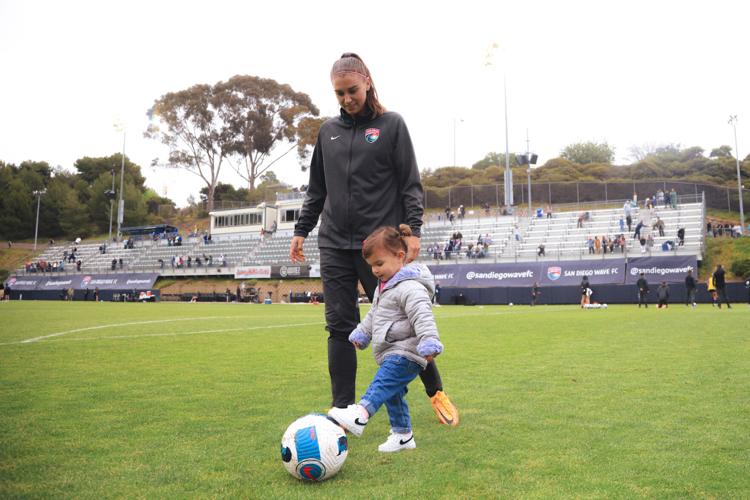 “This is where me and my husband always said we wanted to settle down and have a family,” says the U.S. women’s soccer star and new San Diegan. “It was a long-term vision for us. I never thought I would be able to be here and play soccer.”

I spoke with Morgan on a cool, cloudy morning before practice with her new team, the expansion San Diego Wave Fútbol Club of the top-division National Women's Soccer League (NWSL). The club trains at the Polo Fields in the shadow of the Rancho Santa Fe foothills. A light mist carries the smell of fresh-cut grass and nearby horse stables as we talk on the side of a perfectly manicured soccer pitch.

Morgan is a SoCal kid, born and raised in eastern Los Angeles County. “A lot of my memories are right here at the Polo Fields, for a Surf Cup, or coming down with my family for soccer tournaments,” she says. “Then getting to know Servando [Carrasco] in college, I got to visit San Diego a lot more. So it wasn't that far away from us, and now to be able to get to know the community on a personal level, it's so fun.”

Morgan’s husband Servando Carrasco is a San Diego/Tijuana native and a professional soccer player himself. They met as undergrads at Berkeley, then followed each other around the country and world throughout their careers. Late last year, Morgan engineered a trade from the Orlando Pride, her professional club of six years, to the Wave. Today, they've settled in coastal North County where they're raising their 2-year-old daughter Charlie.

“I thought, ‘Okay, we retire, come [to San Diego] in my late 30s, expand our family and this is our long-term home,’” Morgan says. “Then less than a year ago I learned about a team coming here. I was like, wait, I could actually finish my career here, build a new team, and make something special. And then to be part of that team after my playing career, as a partner, ally, and ambassador—what a special thing to be able to do.”

Morgan is a big star in the soccer universe. She played a major role in a FIFA World Cup Final at barely 21 years old, scoring a goal and notching an assist in a thriller overtime loss to Japan. She won Olympic gold with the U.S. national team the following year, then helped lead the American women to consecutive World Cup trophies. Today, at age 32, Morgan is a U.S. soccer legend and one of the world's most prominent players. She’s also a bestselling author of a personal memoir and a 12-part series of children’s books.

Most recently, Morgan and her teammates scored a historic victory in a years-long battle for equal pay. She was one of five U.S. women’s soccer players who filed a wage discrimination claim with the Equal Opportunity Employment Commission in 2016. It was the beginning of a difficult and contentious campaign that culminated in a just-finalized landmark collective bargaining agreement, splitting prize money and other compensation equally between the men’s and women’s national teams. The agreement is the first of its kind in any sport worldwide.

“It's a huge step forward for soccer, and for women's sports,” Morgan says. “It's already made a huge impact in the last six years of challenging the norm, breaking down barriers, and helping other women athletes fight for their value as well. We saw the long-term effect of this fight, and we all committed to it. It is definitely an accomplishment to be able to stand here today and know that we have equal pay treatment with our male counterparts on the international stage.”

Crucial to that accomplishment were players with a significant platform leading the charge, athletes already making good money, giving up hundreds of hours of their lives to fight for an important principle with tangible results.

“I think you have to use your voice if you have the platform to do so,” Morgan says. “I am fortunate enough to be one of those people. Megan Rapinoe, Becky Sauerbrunn, Crystal Dunn, all of these players, myself included, really tried to use our voice. We know that we're not going to be the ones who will benefit the most from this equal pay agreement moving forward. I only have a few years of soccer left. The ones who are going to reap the most benefits are the next generation.”

I mention that younger players will surely recognize her with a plaque or a Hall of Fame nomination. Morgan laughs and says, “Yeah, they could pass down some of their paycheck to us when we're all washed and retired.”

Morgan doesn’t shrink from challenging issues. We spoke shortly after the school shooting in Uvalde, Texas, a national tragedy that was only days after the mass shooting in Buffalo, NY.

“It has been really tough," she says. "I feel like it's really affected the way that I think about how I parent and where I'm going to put my daughter in school. It makes me think, ‘What more can I do to force the Senate and politicians’ hands in trying to enforce stricter gun laws, and get AR-15s completely out of the hands of every American?’ I feel so terrible for the families of people who were lost in Buffalo, in Uvalde, and in all of the other mass shootings in our country—the 250-plus mass shootings in recent years. It's a deep sadness and grief, but it's also a sense of rage, that it could be prevented and it's not being prevented.”

A humble star comes to San Diego, the promised land of contrasts

San Diego is a place of contradictions in its sporting pursuits, as it is in so much else. The city has had franchises in each of the “Big Three” professional sports, yet currently only has one. It's a town and region with a deep soccer heritage that hasn’t had a top-division men’s team in almost 40 years. It’s also a place that develops and attracts elite talent but has never celebrated a major championship.

Morgan keenly sees that unrealized potential, and projects a bright future for her new—and ideally last—professional club. “I think there is something very untapped about San Diego,” she says. “Each person right now has a big part in how this team will be embedded in this city. The direction that this club and this crest will go, whether it's lateral, whether it's up—it's not going to go down.”

At the moment, that potential is flying under the radar. The team’s training ground is reached by gravel roads and served by administrative offices in modular trailers. Wave FC plays at the intimate Torero Stadium, its temporary home on the USD campus, and will move into the new Snapdragon Stadium in Mission Valley this fall.

The humble early beginnings and modest outward appearance belie a heavyweight franchise core. Billionaire Ron Burkle, a part-time resident of a $30 million La Jolla Farms estate, is the team’s owner. Team president Jill Ellis won back-to-back FIFA World Cups as head coach of the U.S. women’s national team, and bringing her on to run the San Diego club was regarded as a major coup. In addition, head coach Casey Stoney has an extensive pedigree as a player and coach in English soccer.

“[The players] have felt supported in every way here at the club,” Morgan says. “The people at the top know what they're doing. Ron has been the owner of other professional sports teams. Jill has been a coach of the best team in the world. Casey has been a player at the highest level herself, at World Cups and Olympics. You have the people in charge that know how to lead a team, and get it up off the ground and running in a short period of time.”

With all that background and experience, Alex Morgan’s star power and goal scoring have conferred instant credibility to the brand-new franchise. Attendance jumps at games when San Diego Wave is the visiting team. Most NWSL games are broadcast by the Paramount+ streaming service, and the only two league games this season carried on the CBS television network will feature Morgan’s Wave FC.

The team and its marquee draw got off to a fast start on the field as well. Morgan tied an NWSL record with four (!!) goals in the team’s first-ever home game, and the Wave entered June at the top of the NWSL standings.

“We're setting up something amazing, bringing women's professional sports to the city of San Diego for the first time in many years,” Morgan says. “I think that's important because it increases accessibility for the next generation, for the girls. Not only playing soccer, but sports in general, here in the city and the greater area of San Diego, to look up to us and have that dream of wanting to be a professional athlete. Growing up here, you had to look outside the city and outside the state. To be able to not only now have that available and accessible to them, but to have a professionally run team in the great facility being built.”

I was struck by how down-to-earth an athlete of Morgan’s stature comes across. She is genuinely grateful for the opportunity here. “This is the first city since growing up in Diamond Bar where I feel at home,” she says. “It's where I see myself living indefinitely, raising my children and having a family here.”

“I'm already in love with the city and always eager to learn more about it. And not to shy away from the fact that I didn't grow up in the city and don't know the area as well as I intend to and want to,” Morgan says. “I want people to also understand something amazing that we're building here, and that I'm very proud to help bring this women's team to San Diego. We're so proud to represent this city and we're here to stay for the long term. We can't wait to have a massive fan base, hopefully bring great success to this city and championships as well.”