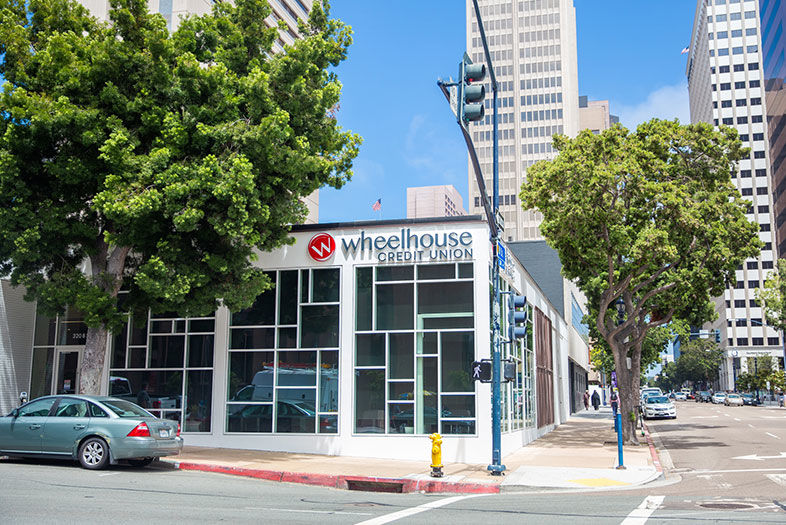 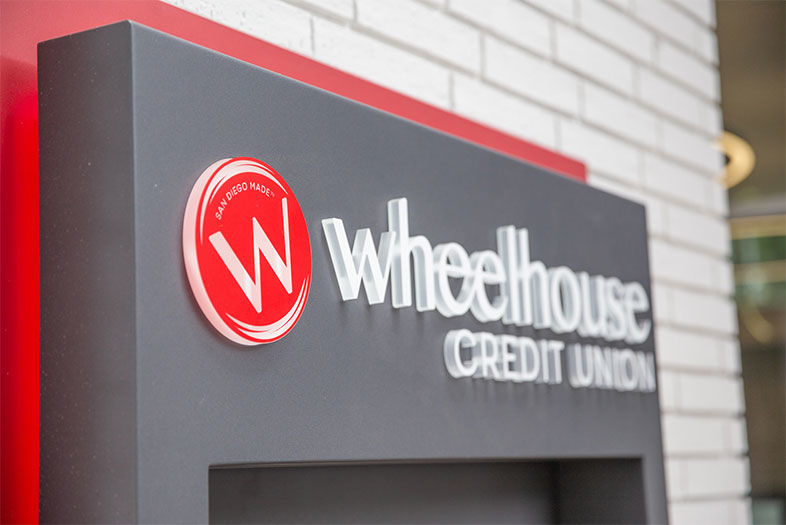 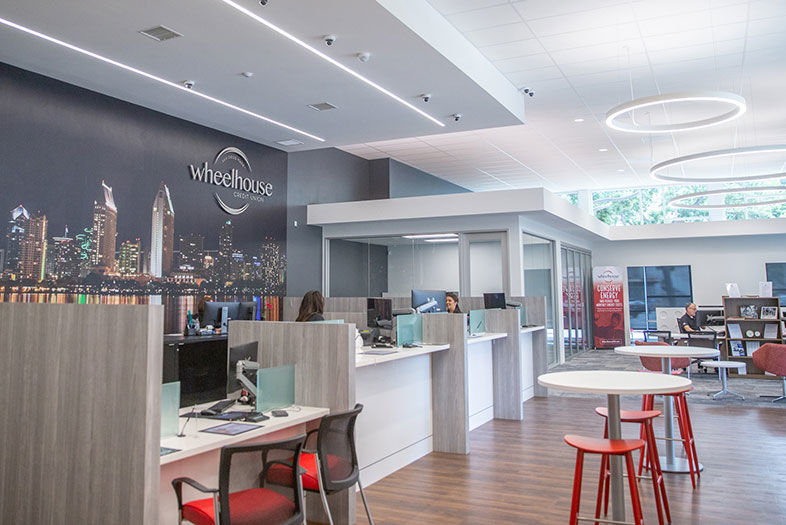 To bring the most modern banking conveniences and expanded member services together, Wheelhouse Credit Union reopened their downtown branch in early June. The branch, centrally located at Third Avenue and B Street directly across from the San Diego Civic Center, features a contemporary layout and new exterior to enhance this highly-traveled corner in the heart of the city.

In addition to the most up to date ATM technology, the completely remodeled branch will include "Wheelhouse Rooms" that serve as private lounges for Members to access during the day. A monumental San Diego skyline graphic can be viewed through the geometric glazing from the street. The interior, with its grand ceiling height, large brand mimicking light fixtures and clean architecture embrace Members as well as those passing by.

"We expect the Wheelhouse Rooms to be very popular with our Members, whether as an escape from their offices or a convenient location to spend some time before catching the train or preparing for a meeting. We see them as an oasis from the otherwise pulsating downtown hustle," said Wheelhouse President & CEO Lisa Paul-Hill.

As one of San Diego’s oldest credit unions, Wheelhouse Credit Union’s roots have always been downtown. Founded in 1934 by a group of City of San Diego employees, Wheelhouse Credit Union is and will always be "San Diego Made". With the rebrand in late 2018, the organization promised a renewed commitment to sustainability, continued duty toward locally-sourced team members whose longevity with the organization far exceeds the industry average, and a pledge of supporting community institutions such as Rady’s Children’s Hospital and I Love a Clean San Diego. As a member-owned, not-for-profit, the credit union is able to offer lower borrowing rates and generous dividend payments to Members ensuring they play a key role in uplifting the local economy.

"As expectations and needs of our Members and future Members change, we have and will continue to adapt and evolve with them," added Paul-Hill. "Customers expect modern, hassle-free technology, but also want the opportunity to get expert, personalized advice for a variety of financial situations from college savings plans to retirement planning. This new branch layout and suite of amenities matches our Member-first commitment of products and services which include high-yielding accounts, progressive solar-loan programs, and auto rates that place customers into a favorable financial negotiating position when purchasing their car or truck."

Originally acquired in 1996, the renovation of the building reclaims the original historical appeals with adding modern architectural accoutrements.

"Originally constructed in 1968 near the end of the "Mid-Century" movement, the various renovations over the years had closed down and concealed the building’s original architecture in response to the gritty urban neighborhood," observed architect Laura Metcalf of Hurkes Harris Design Associates, Inc. "The Mid-Century movement was characterized by clean lines, ample windows, natural light and large open floor plans. The intent was to open up the interior spaces bringing in the outdoors. This was the perfect marriage for a community credit union and the City it serves. Using a Mondrian inspired exterior storefront design, clean bright white masonry, and modern LED lighting to highlight the façade, the new branch revitalizes the corner of 3rd & B, creating a focal point in its prominent location adjacent to the San Diego City Center."