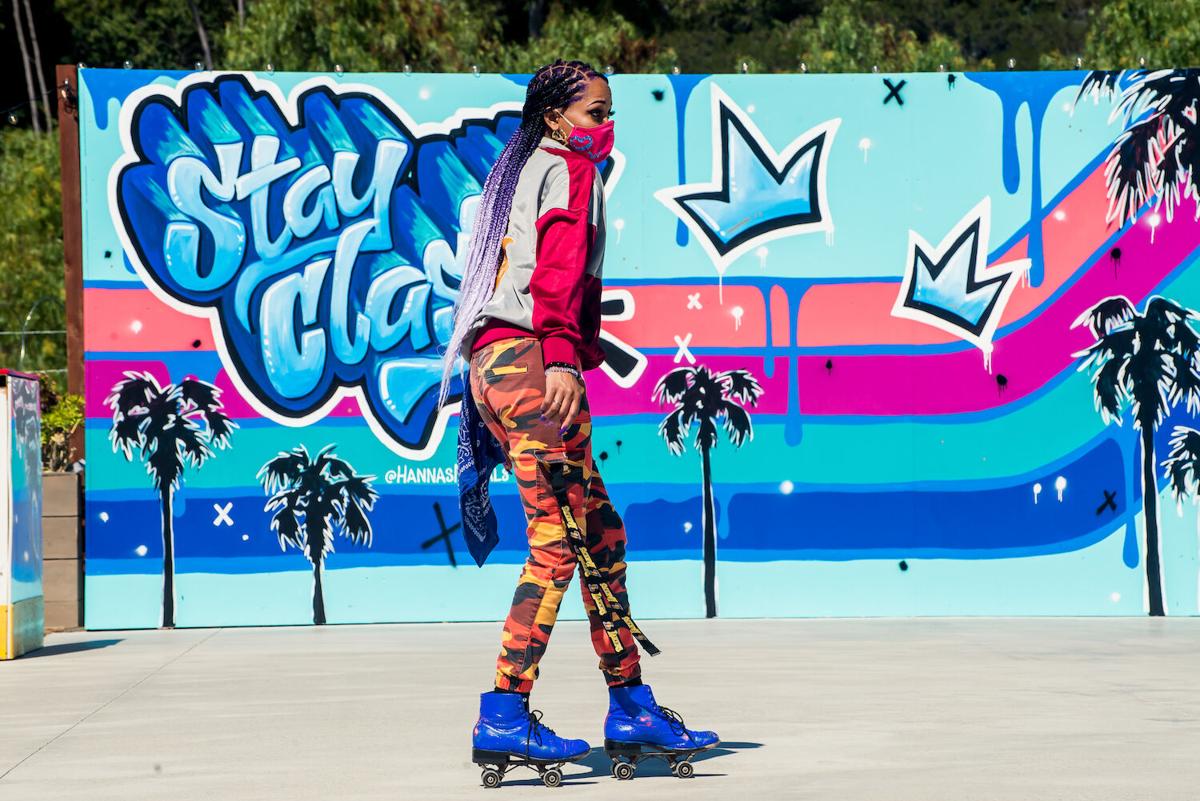 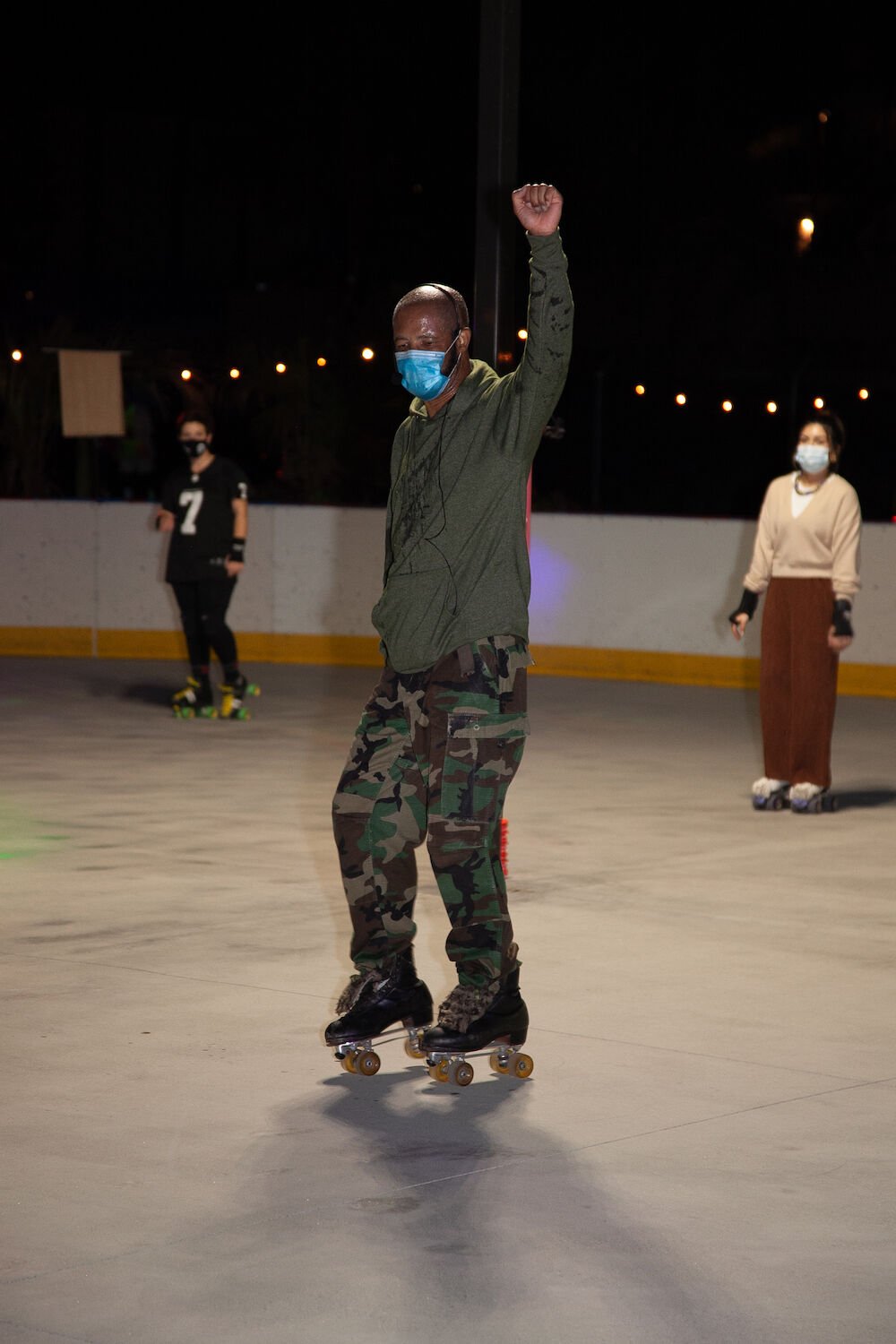 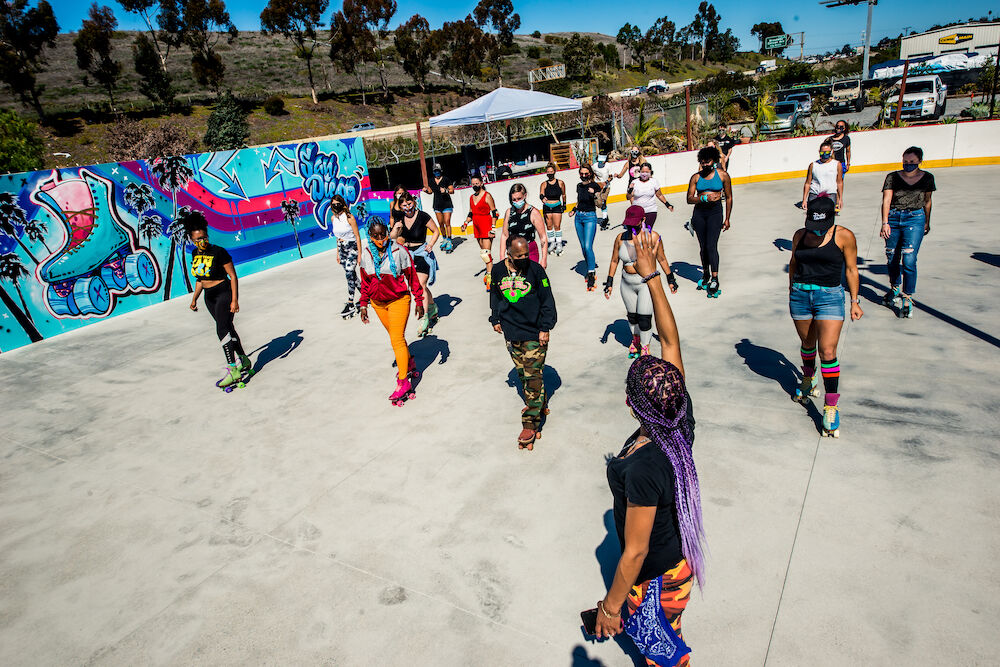 Hvzel from The SK8 Pop Up teaches a class 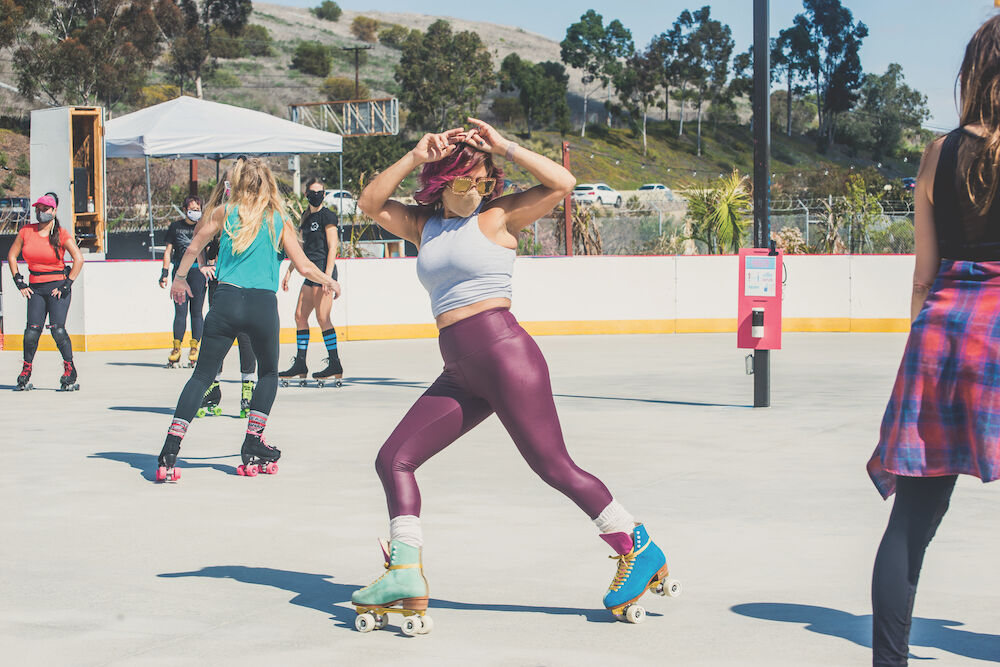 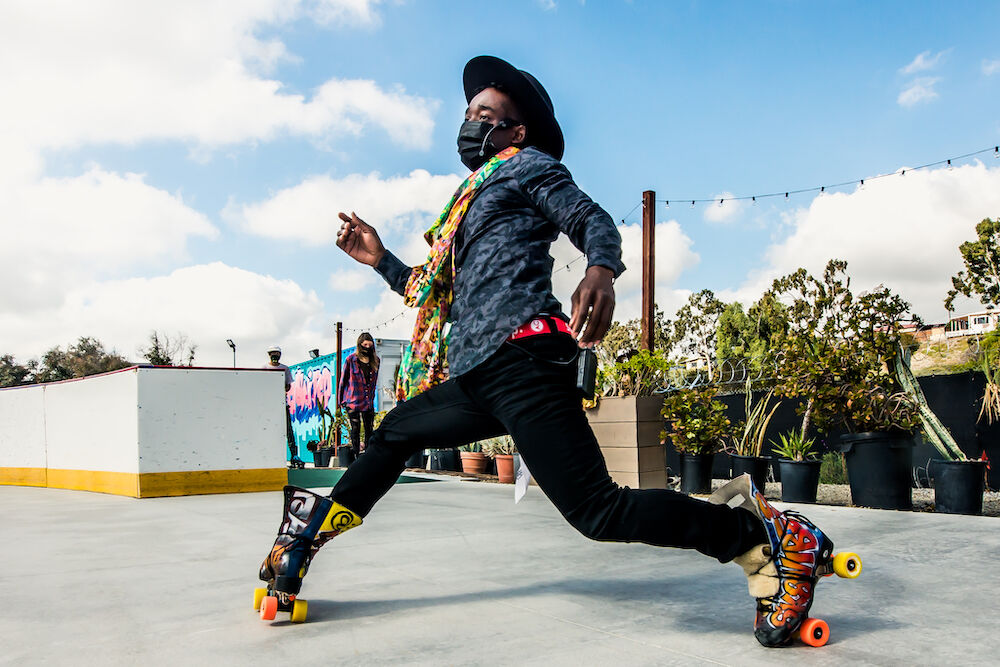 Derrick Pernell shows off his moves at Derby United HQ 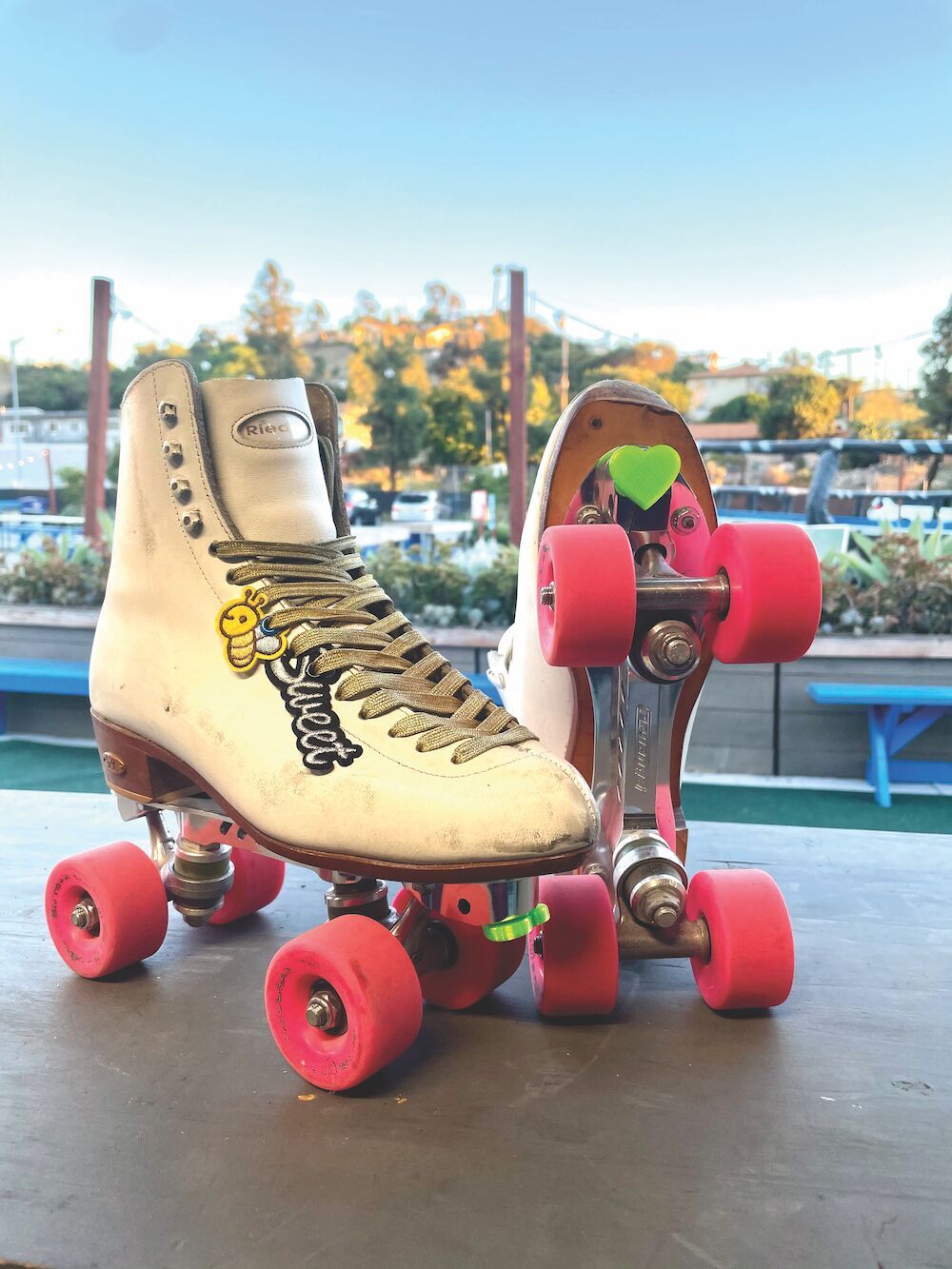 If you’ve ever wondered about San Diego’s roller skating community, just step outside. You’ll find glimpses of it on the boardwalk, where skaters cruise along Mission Beach with a speaker in hand. Or at outdoor rinks like Derby United HQ in Encanto, or Sunset View Park in Chula Vista. You’ll even find them at Liberty Station and—defying the posted rules— at Balboa Park, creating a makeshift rink with any patch of concrete they can find.

The thing is, location isn’t that important when it comes to skating—it’s more about the people, the music, and the energy. In short, it has to pass the vibe check.

No one knows that better than Nili Goldfarb, better known as “Isabelle Ringer,” a competitive roller derby skater and owner of the Derby United team. Almost accidentally, Ringer has created a unique place for San Diego skaters. One where pros teach classes, DJs mix house music and spin vinyl, and newbies are welcome to lace up for the first time and groove alongside “OGs.”

“There’s this old culture of how things are at the roller rink,”Ringer says.“We’re taking some of that and kind of mashing it up to become another moment.”

Ringer and Derby United, previously known as the San Diego Derby Dolls, spent most of their years training in a warehouse downtown. When prices kept climbing, Ringer went on the hunt for a new location. At the time, the Encanto venue was nothing more than an empty dirt lot tucked between construction sites and industrial complexes. But she had a vision—there was room for two outdoor rinks, more space for people to come and watch the competitions, ample parking, and the opportunity to host the occasional open skate for the community outside of the roller derby world. They broke ground in fall 2019, and by March 2020 they were putting the finishing touches on the space. Six days after their soft opening, the state’s stay-at-home order went into effect. So things had to shift.

“By the time outdoor recreation reopened last summer, there were so many people that turned to roller skating and were starting from nothing,” Ringer says. “We thought, ‘Hey, we know how to teach people to skate,’ so we started offering really small group classes to teach the basics.”

The classes booked up fast, so she started hosting open sessions for people to reserve a spot to free skate, which built her a rep among regulars. She even connected with local DJs who were looking for places to play after cancellations and closings put them out of work. What was meant to be an occasional event in pre-COVID times became the lifeblood of her business and San Diego’s skating community alike.

At the same time, roller skating started trending on TikTok and Instagram. Many were quick to call it a “boom” brought on by the pandemic, much like the cycling boom that cleaned out bike shops across the country. But Ringer thinks that dismisses the long history of skate culture.

“Roller skating didn’t get invented or even reinvented in this moment,” she says.“There’s a lot of Black excellence in roller skating coming out of the rinks in Atlanta and St. Louis that has led to all these folks of every background learning these different styles. I understand some people will say, ‘I learned everything off Instagram,’ and that may be true, but those people you saw on Instagram learned those moves from someone who came before them. You may not have learned it from a person of color, but somebody did.”

Expressing Yourself on Wheels

While the pandemic definitely lent it momentum (and gave people more time at home to scroll through Instagram), the roller skating scene was already gaining speed, especially in San Diego. Ringer credits a couple of key factors: brands like Moxi, who were among the first to popularize brightly colored skates, and longtime skaters deeply connected to the culture who were eager to uplift and share their knowledge with newcomers.

“People were seeing these Moxi skaters, and really slick skaters like Derrick Pernell,”she says.“You start visualizing yourself in those skates, you know? You just want to be a part of that.”

Pernell, who is on active duty in the Navy and stationed in San Diego, grew up in Atlanta. He says roller skating is just a way of life there, something that everyone does growing up. He fell in love with it almost immediately, skating all the way up until he joined the military, and continues to do so between deployments.

Pernell embraced this new wave of interest in roller skating by offering private and group classes, and teaching at Derby United. His classes book up fast, often with repeat students who started with him as total beginners. People look up to him, even try to emulate his style. But he says that everything he’s learned was influenced by the OGs of the roller rink.

“Before roller skating was blasted everywhere on social media, it was this underground thing you just had to know about. Those people were the ones who taught me what I know.”

In San Diego, Jerry Beck is one of those OGs, although when asked about it he laughs and says he has no idea how it happened. Beck was born in Pittsburgh and grew up a self-described “rink rat” before moving to San Diego and spending time at the old Sweetwater rink in National City.

What Beck finds so addictive about roller skating is the freedom that comes with it. “I love music and I love to dance. You really do get lost in that combination,” he says. “Every time I go out to skate feels like the first time.”

He’s passed his knowledge on throughout his career, teaching everyone from beginners to seasoned skaters who come from all over the country. And he says that’s what makes teaching so rewarding: Every skater is going to do things a little differently based on where they’re from.

“I can look at a skater move and know exactly where they came from,” Beck says. “An Atlanta skater, like Pernell, will move differently than a skater from California.”

Pernell says Atlanta skating means high energy with a lot of rhythmic stomping in large groups, whereas Beck says California skating is smoother and slower, where skaters glide across the floor.

“Here, everyone does the Downtown. That’s a popular West Coast step,”says Beck.“But it’s done in other states, too. And it will look different in each one depending on what the style is, or who is influencing the styles in that area.” That’s part of the magic of skating, he says. In a way, each skater is like a melting pot of the moves and styles they’ve been influenced by. And when they teach or take a class from someone else, they’re continuing that long line of history.

Pernell says that’s especially true in San Diego: “It’s so refreshing here. The community and energy down here is so different.”

And it’s not going anywhere anytime soon. Now that people are taking the time to learn about the culture behind roller skating, he sees it lasting for the long haul. Isabelle Ringer says that once she can operate Derby United HQ as the roller derby facility it was intended to be, she’ll continue offering classes and open skate sessions: “There’s a lot of people who find happiness here, and I’m not going to take that away.”

It’s part of the community now. An outlet for San Diego skaters—whether it’s their first time lacing up or their hundredth—to move alongside one another, learn about the culture, and, as Jerry Beck puts it,“enjoy the freedom to express yourself on wheels.”