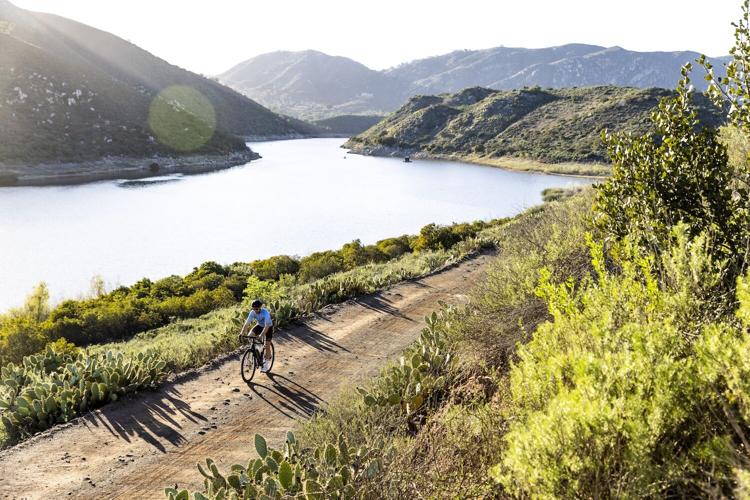 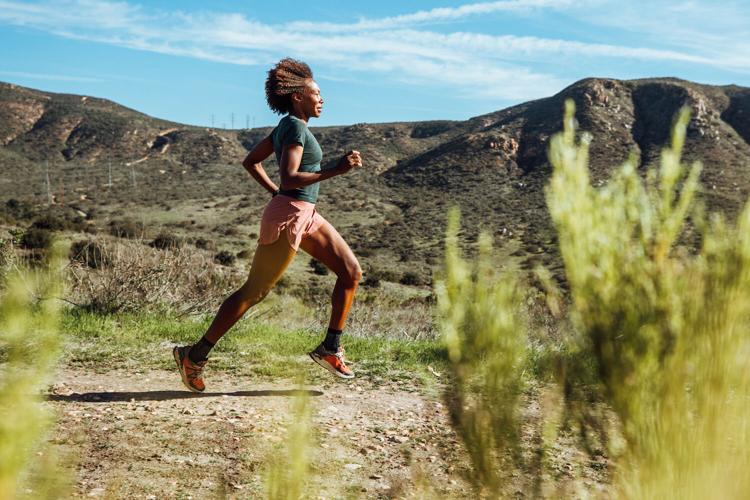 Runner Iman Wilkerson likes to wind down her runs with a listen to Duke Ellington and John Coltrane's "In a Sentimental Mood." 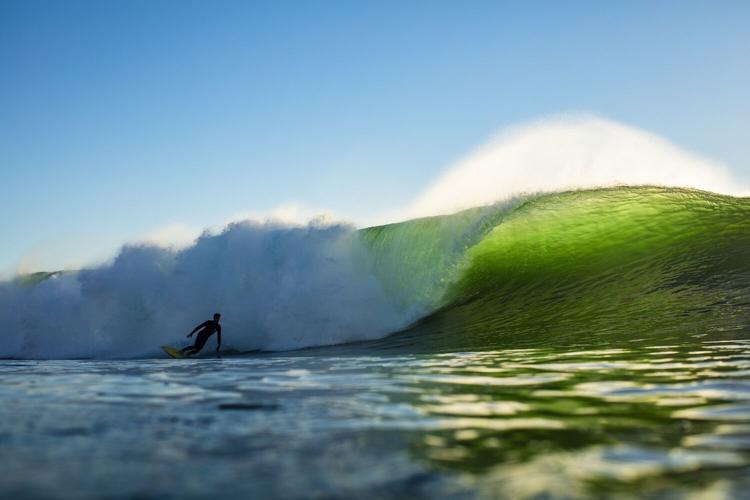 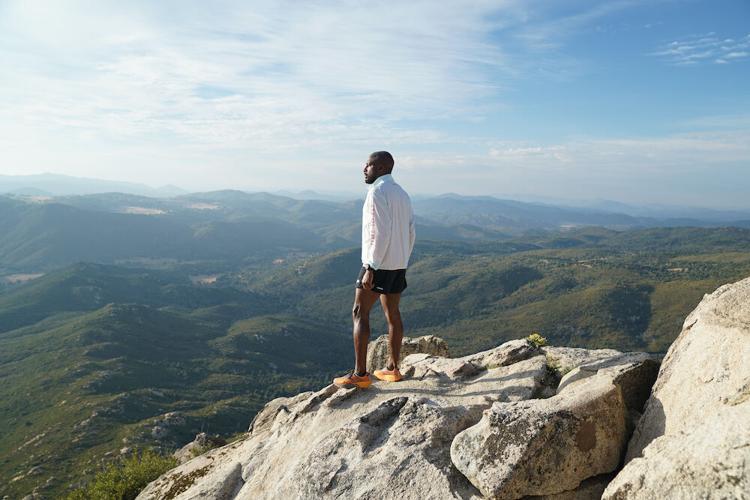 Long-distance runner Lesford Duncan begins each adventure with the mantra, "It's going to be a long day" 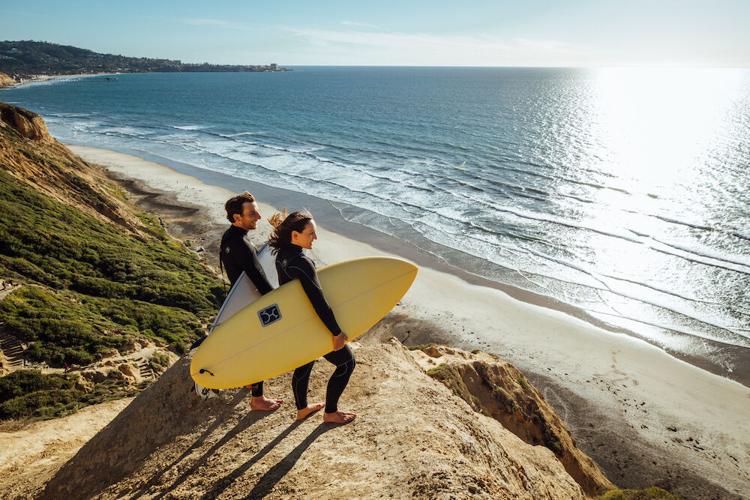 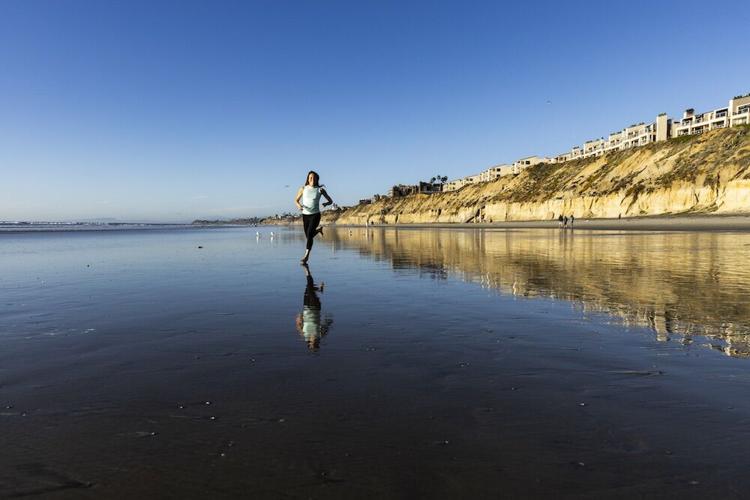 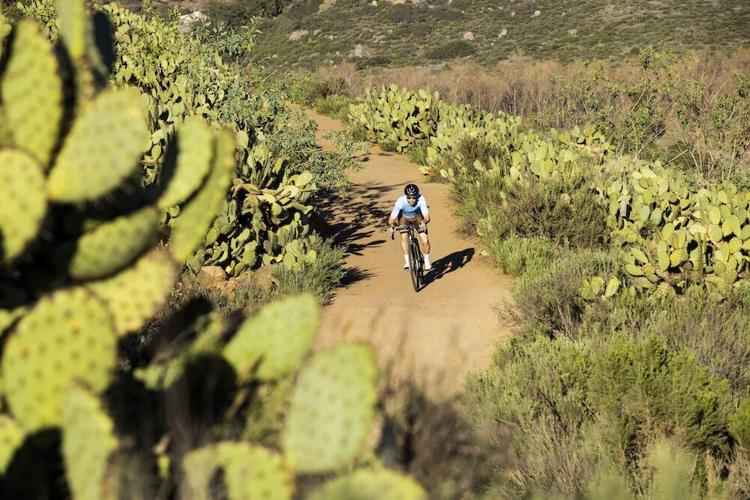 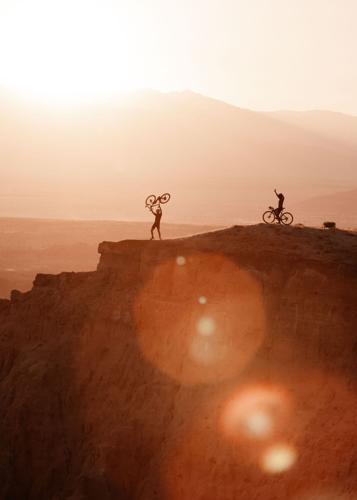 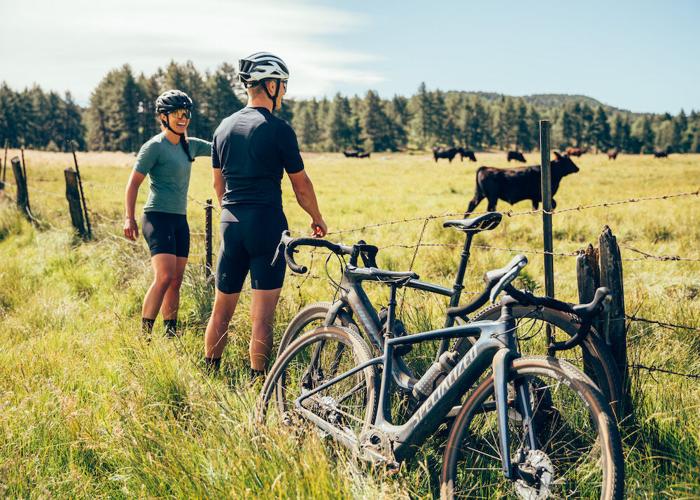 Cyclists pausing at a mountain pasture 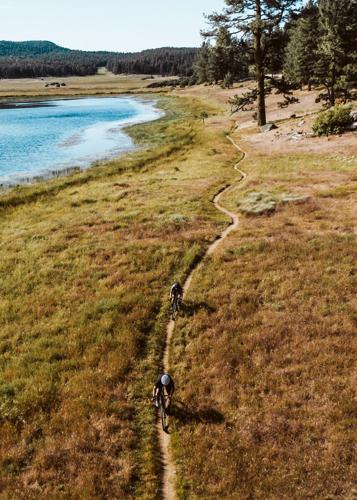 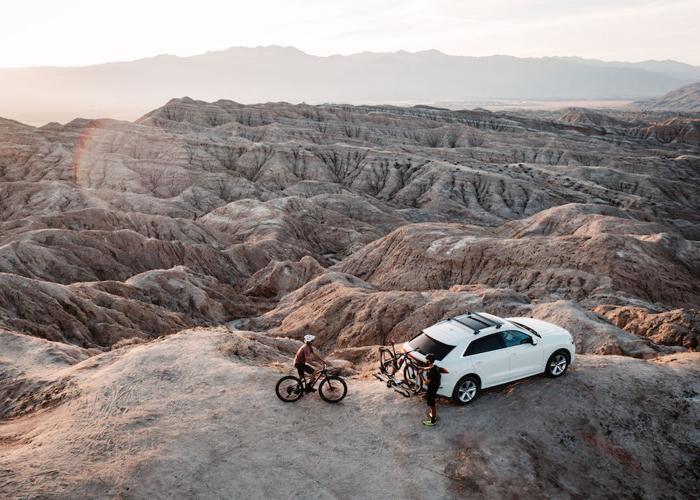 The craggy cliffs of Anza-Borrego 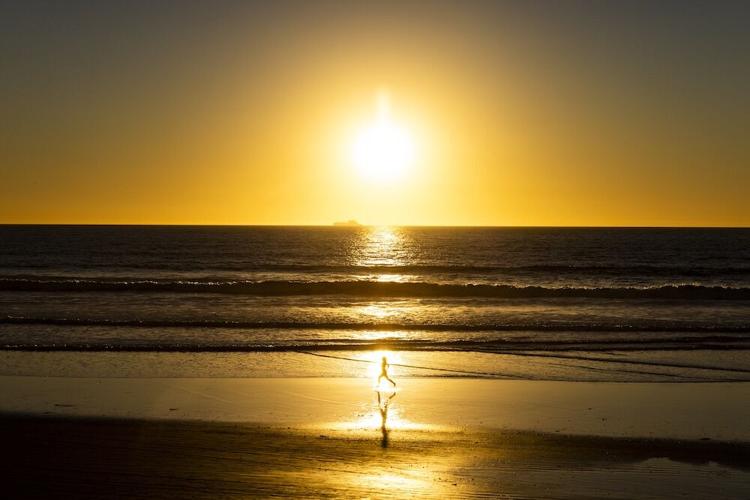 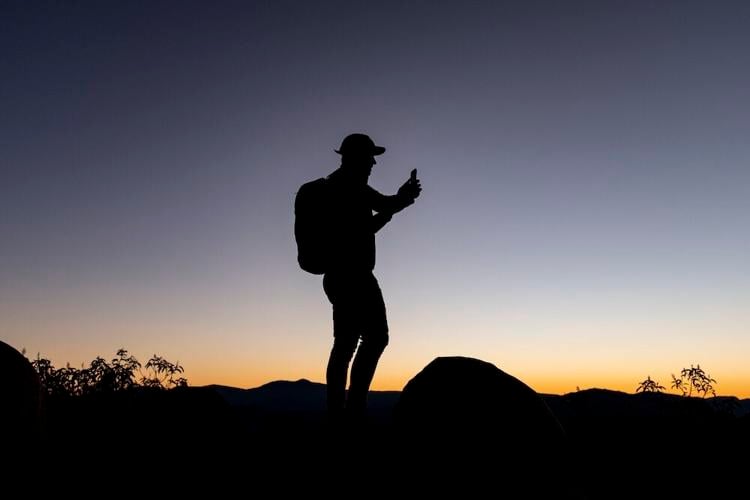 A silhouetted hiker at Iron Mountain 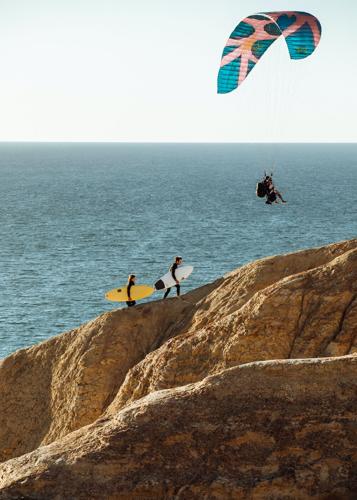 They’ve explored the world through their lenses. One is a former pro snowboarder from Finland. The other has claimed his own title as Kelly Slater’s trusted photographer. Together for this issue, Jussi Oksanen and Todd Glaser set their cameras on each other at their respective playgrounds: Oksanen hits the bike trails at Lake Hodges while Glaser and his wife, Jenna Klein, maneuver a switchback at Black’s Beach. The photographer’s world in San Diego proves limitless.

Jussi Oksanen never runs out of locations. Ever. The retired Finnish snowboarder-turned-cyclist brings his off-piste adventure to his photography career, exploring San Diego’s untamed corners to shoot lifestyle campaigns for Specialized bikes, Volkswagen, Kashi, and Fat Tire. With a sixth sense for light and topography, he scouts locations by bike, breezing through Borrego, Mount Laguna, Mount Israel, and his nirvana, Lake Hodges.

GEAR: “My Specialized bikes and the Mizo V8, a double-vacuum-insulated bottle that keeps water cold for 24 hours.”

FUEL: “Double espresso from Zumba Bar in Cardiff; or oatmeal and coffee from Lofty in Encinitas by the train tracks.”

SPLURGE: “Once you earn it, VG Donut. And we love Leucadia Donut Shoppe, too.”

“If someone would have told me I’d be wearing more spandex than normal clothes, I’d say no f—ing way,” laughs Oksanen.

After an 18-year snowboarding career that spanned the Olympics, X Games, and US Open, Oksanen cofounded Mizu, which makes insulated water bottles, back in 2008. Here in San Diego, he tapped into a long-standing love of photography to tell brand stories with a stirring sense of adventure and place.

“There are areas here like Mount Laguna and Mount Cuyamaca where you feel like you are in the Sierra Mountains,” he says.

For Iman Wilkerson, every run starts on instinct and ends with Coltrane. As the early morning fog lifts, the marathon runner and Lululemon ambassador winds down at Mission Trails or Mount Laguna’s Noble Canyon Trail. Each time, “In a Sentimental Mood” soundtracks her transition from runner to community creator at The Run Down, the app she cofounded in 2019.

SPLURGE: “The Friendly, for a Dirty Flat Top OG burger and a local beer in a can!”

STOKE: “Wild Ideas Worth Living—an REI podcast with Shelby Stanger. She interviews people doing amazing things that inspire me to live out my wild ideas.”

The Run Down builds a tight-knit band of runners across six major US cities (San Diego and LA were first) by linking them with nearby running groups, races, and resources. There are amateurs prepping for their first 5K and seasoned pros gearing up for their next marathon (Wilkerson has completed Boston and NYC twice). From her post in University Heights, Wilkerson is reshaping a sport of solitude into an amoeba of runners across all ages, genders, body types, and experience levels.

“The more we’re connected, the more collaboration—you see people running together that you never thought you’d see,” she says. “It’s really cool to be able to have that kind of synergy.”

And it all starts on a path—gravel, dirt, concrete, whatever’s in front of her—where she says moving one’s feet quickly turns into liberation in motion.

Consider her the audio equivalent of a starter gun. When host Shelby Stanger takes to the mic on her Wild Ideas Worth Living podcast, listeners can’t help but foist themselves from their couches and step outside. We’re not talking triathlon training. Or even a hike up Iron Mountain.

GEAR: “Altra trail shoes. Vuori joggers. Surf Diva hooded sweatshirts and hats. REI for all my camping or climbing gear. The Firewire Seaside is my go-to for everyday surf.”

FUEL: “I drive all the way to La Jolla to get great salads at Candor by Giuseppe and fish tacos at El Pescador.”

SPLURGE: “I love to invest in body work. I couldn’t live without Rip Zinger, and Cari McClemons at Peak Performance Physical Therapy in Solana Beach.”

STOKE: “I’m a big fan of Thích Nhât Hanh, who just passed away, and his monastery at Deer Park in Escondido. It’s a true San Diego gem.”

The Solana Beach–based journalist advocates that the smallest dose of adventure goes a long way. Her casual interview style—combined with her vulnerability in sharing her own struggles, triumphs, and even vitiligo—lends the show a convincingly fresh voice of courage. “I’m a pretty open book,” says Stanger, “which helps most guests cut through small talk to the stuff that matters most.”

Since 2016, Wild Ideas has evolved into a safe place where she’s interviewed accidental heroes alongside heavyweights like Wim “The Iceman” Hof, Wild’s Cheryl Strayed, and Free Solo rock climber Alex Honnold. It’s no wonder REI has her booked ad infinitum: This season, listen up for Erin Parisi, the first trans woman to attempt the Seven Summits; Eddie Taylor, part of the first all-Black team to attempt Everest later this year; and Rick Stanton, one of the cave divers who helped rescue the Thai soccer team in 2018. When she’s not recording, you might catch her moonlighting with her friends from Surf Diva, where she’s taught surfing since she was 16, consulting with brands to create their own podcasts, or barefoot beach running from Cardiff to La Jolla.

He took Mount Whitney first. Then Mount Everest Base Camp, Kilimanjaro, the Tour du Mont Blanc. Lesford Duncan has seen the world from its most impressive peaks. This spring his eyes are set on the San Diego 100, a single-track mountain course spanning the Pacific Crest, Noble Canyon, and Lake Cuyamaca trails, with 26,000 feet of total elevation change and an average run time of 32 hours.

It’ll be the first 100-miler for Duncan, a 34-year-old ultramarathon runner and associate executive director of Outdoor Outreach, a nonprofit that connects San Diego youth to the transformative powers of the outdoors. For him, it’s a run-work balance. He averages 50–70 miles a week around central San Diego with groups like Black Men Run SD, or goes solo on his most-loved trails, like the Stonewall Peak loop in Cuyamaca Rancho State Park.

GEAR: “Hoka Speedgoats to keep my stride comfortable and keep my legs from falling off. I buy mine from Greg at Milestone Running.”

SPLURGE: “Rock Steady Jamaican Restaurant is my spot! Get there before their jerk chicken runs out.”

STOKE: “Full Circle Everest gearing up to be the first all-Black expedition to summit Mount Everest this spring.”

“I want to make the outdoors more inclusive,” he says. “A part of that is expanding the outdoors beyond competitive feats—to be in this space just to enjoy it.”

It’s not a time game for Duncan so much as an act of personal resilience. He starts with his mantra—“It’s going to be a long day”—and slowly, steadily embraces that until he finds himself at the finish line. “Running long distance is both mental work and complete joy,” he says. “It’s knowing you can put your body through this and somehow feel more alive than you ever have before.”

SPLURGE: “The caldo de pollo soup at Lourdes Mexican Food in Cardiff is how we warm up on a cold night after surfing.”

STOKE: “Podcaster Jocko Willink always gets me motivated! We have a little sign in our kitchen next to the snacks that says, ‘What would Jocko do?’”

“Kelly makes the waves look good,” says Todd Glaser. It’s an understatement, from the humblest photographer on the planet. It takes his wife and fellow adventurer, Jenna Klein, to brag on his behalf. For 15 years, the San Diego–born surfer and waterman has served as Kelly Slater’s personal shooter. “I’m super fortunate to see some of the best waves in the world on the best days,” he says.

JENNA’S FUEL: “The sprout probiotic salad from Goodonya Organic with cashew herb spread and fermented carrots that are super bright and gingery.”

SPLURGE: “When I’m four hours into a ride, nothing hits like a ginger molasses cookie from Prager Brothers bakery in Encinitas.”

STOKE: “For podcasts, it’s all about Wild Ideas Worth Living, and Changing Tides Foundation for their environmental education and community empowerment.”

Guided by swells, Glaser’s itinerary is intense. In the last few weeks alone, he’s traveled to Tahiti and twice to Hawai‘i, including the Pipe Masters, where Slater won the title (at age 50, cementing his superhuman status). But his home turf in North County is where he adventures with his most trusted partner, Klein, a competitive cyclist. There’s camping in Anza-Borrego Desert State Park, pilgrimages to Iron Mountain with headlamps, and wild bike trips through Catalina’s backcountry. “I try my absolute hardest to pass her,” he says with a smirk.

Glaser’s work has appeared in the New York Times, Outside, and at the Smithsonian; he’s got a book under his belt and a second planned for the Slater oeuvre.

“I want to make images that define that feeling of surfing,” he says. “Their journeys reflect our journeys.”