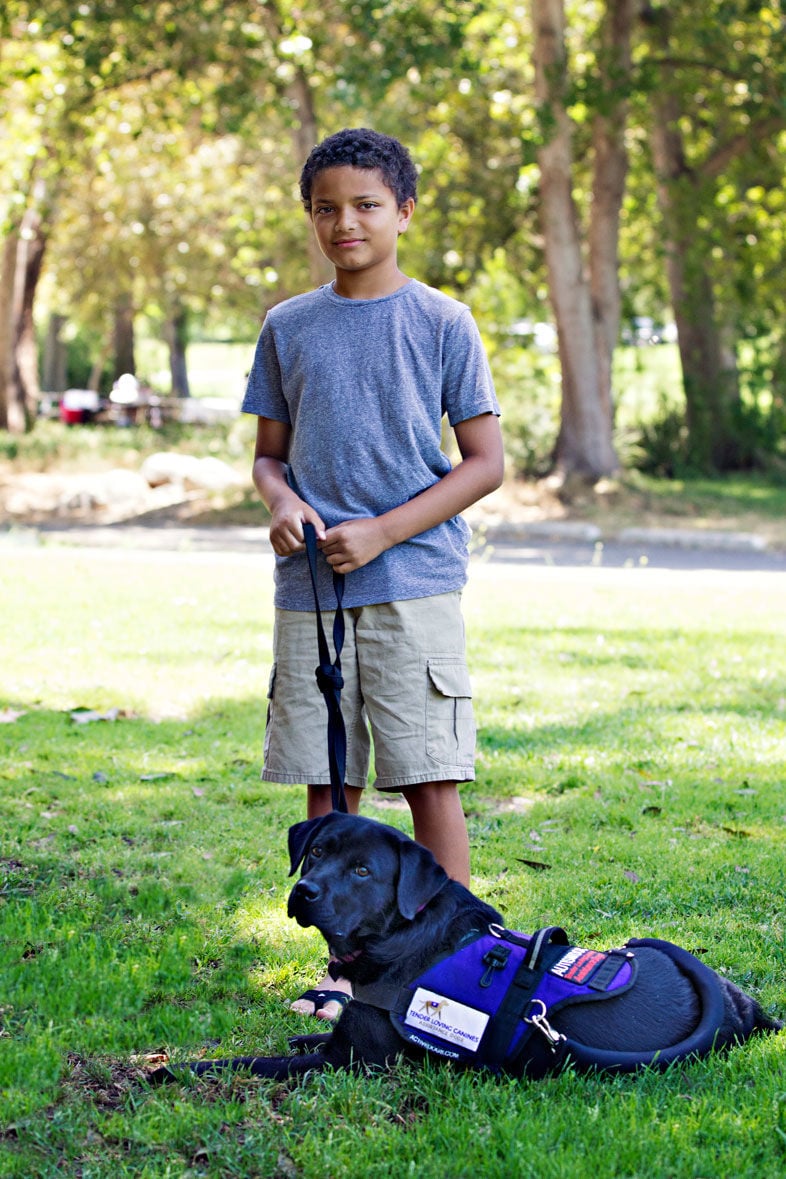 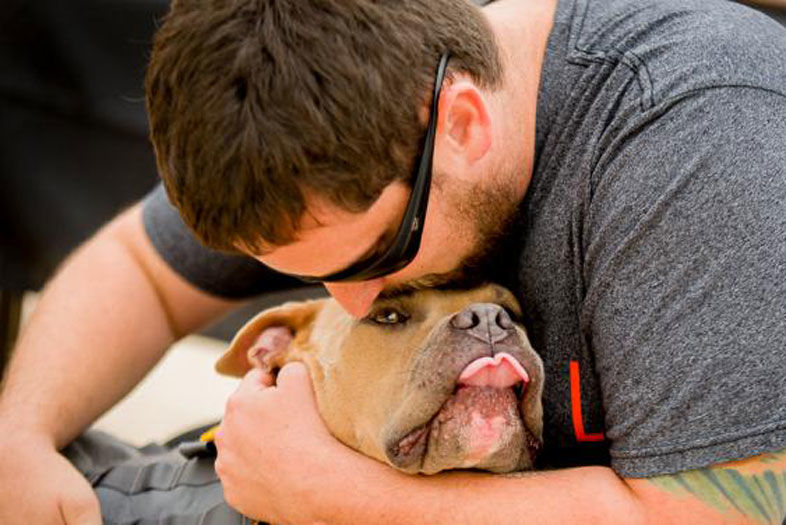 Belle: From Prison to Service Dog

Looking back on his 14 years of incarceration, Freddy can point to a few clear moments of joy. Each one had Belle in it. "She would make this snoring noise like a little pig when we would pet her," he recalls, and notes the black Lab would sleep at the bottom of his bunk. "We would laugh." Most memorable, though, was when he said farewell to his six-month companion—and student.

As an inmate trainer in Tender Loving Canines Assistance Dogs’ POOCH program (which stands for "prisoners overcoming obstacles and creating hope"), Freddy spent those months preparing Belle to be a service dog for children with autism, like Jackson, a nine-year-old with sensitivities to noise and energy. "Belle is our greatest present, a gift beyond measure," says his mom, Jackie. "She’s so well trained."

POOCH service dog trainers like Freddy undergo six months of instruction themselves to qualify. After that time, animals are placed with inmates typically in teams of two and stay with them 24/7 to be taught common lessons and comforting cues, like when to provide pressure or snuggles to calm a person with autism in a high-stress environment. From there, TLCAD places the dogs with families free of charge—recipients pay only an application fee—after a phone interview and home meeting. Once approved, recipients are a part of TLCAD for life, receiving replacement pups when their own retires and becomes a pet.

"Belle was a magical fit," Jackie says of Jackson’s first encounter with the dog. "He doesn’t tolerate being in a room with a lot of noise, and he just stayed there with us. We knew Belle was our dog right away."

Jackie, too, went through six months of training with Belle to become her handler. Today, Belle serves as an extension of her in caring for Jackson. He hangs on to her harness handle in public places, and she’s a catalyst for social interactions. Since welcoming Belle into their family, they’ve even gone to Disneyland. "TLCAD has made the best of it all," Jackie says. "I can’t say enough about POOCH. The point of prison is rehabilitation; this is truly a way to do that."

For Freddy, the positive review is mutual. He says the program taught him greater empathy. "Because of the dogs and the TLCAD staff, I made friends in a cruel environment," he says. "I see service dogs in stores, and I share my experience with them. My outlook on life is very positive."

Likewise, his life is positive. Freddy recently received his driver’s license and has a full-time job that, for his first time, offers insurance and 401(k) benefits. "It feels great," he says. "I know I made a mistake, but I love my life now."

As for pets? He’s the loving owner of a pocket bully. Her name is Bella.

There have been times when I’ve been hungry, but she’s never been hungry," Kevin says, petting his 20-pound rat terrier, whom he named after the needy title character in Driving Miss Daisy. "I would be needy, too, if I was 126 years old in dog years!"

But being homeless—for the past year he’s had stable housing at Father Joe’s Villages—makes meeting those needs even more challenging. That’s where Helen Woodward Animal Center’s Pets Without Walls program comes in.

Launched in November 2017, Pets Without Walls is a mobile veterinary clinic that serves dogs and cats who live with San Diego’s homeless population. In addition to spaying and neutering, the program provides wellness checks, microchipping, vaccines, some medications free of charge, and pet food.

"People have animals even before they’re homeless," explains Jessica Gercke, communications director at Woodward. "The last thing they need is to lose their family member, because that’s the one thing that brings them joy."

She says the program often finds the people they work with are better to their animals than themselves. "We’re making sure these animals have health care."

The program offers monthly wellness checkups at shelters such as Father Joe’s, which Kevin and Daisy never miss. "There’s no barrier to her care other than remembering the date," he says. "It feels like we’re at a regular vet, without the issues of ‘Can I afford this?’ I never have to ask myself the dreaded question ‘Is this worth it?’"

For Kevin, leaving Daisy behind during his changing circumstances has never been an option.

"I can’t imagine going through this without her," he says. "She has done as much for me as I have done for her." He rescued her from a shelter while working as a registered nurse in Washington, DC, six years ago. "Poor financial decision and crippling depression" led him to become homeless, and he moved to California to be nearer to family.

"It’s hard taking care of something," he says. "But to me, a pet is a sworn responsibility. She’s a big motivation to have a yard, more sun, and to get out of here."

Tank: From Shelter to Soldier

Graham will never forget the first time he met Ben, a retired Navy medic. "He was shaking, couldn’t form a full sentence, was terrified to be out of his home," Graham says.

Then he introduced Ben to Tank, a Staffordshire terrier mix. He stepped away for a few moments, and when he returned there’d been a complete shift in the veteran’s eyes—they were full of tears. "I found Tank in Ben’s lap literally hugging him: legs and paws wrapped around Ben’s neck, embracing him. Ben looked up at me and said, ‘This is my dog, man.’"

Graham, a dog trainer with 20 years of experience, launched Shelter to Soldier in 2012 after being moved by the experience of rehabilitating stray dogs who were brought back by veterans from Iraq. As such, the nonprofit’s mission is two-pronged: "Rescue dogs and veterans from the home front." To date, it has rescued 39 dogs from shelters, 18 of which it has trained and placed with veterans like Ben, who was medically retired from the Navy in 2014 after eight years of service and two deployments to Afghanistan.

At the time he was taking about a dozen medications for PTSD, but still struggled to leave his home, even to go to group therapy. He stumbled across Shelter to Soldier online and filled out an application the same day. "I was just looking for another outlet," he says, and calls that first meeting with Tank "an instant connection."

After six months of training to ensure he had the handler commands down pat—Tank can guide him out of high-stress situations and wake him from nightmares, for instance—he took Tank home. He’s been a member of the family and Ben’s most reliable companion ever since, having accompanied him through two degree programs and to his first-ever football game.

"It’s great to see people supporting organizations like this, because it changes people’s lives—not just me and Tank," Ben says, crediting it with improving his relationship with his wife, his kids, his friends, and other veterans. He even chose to volunteer with Shelter to Soldier himself as a peer support specialist. "Now I’m the one giving back through my story. I’m the one getting others out of the trenches."