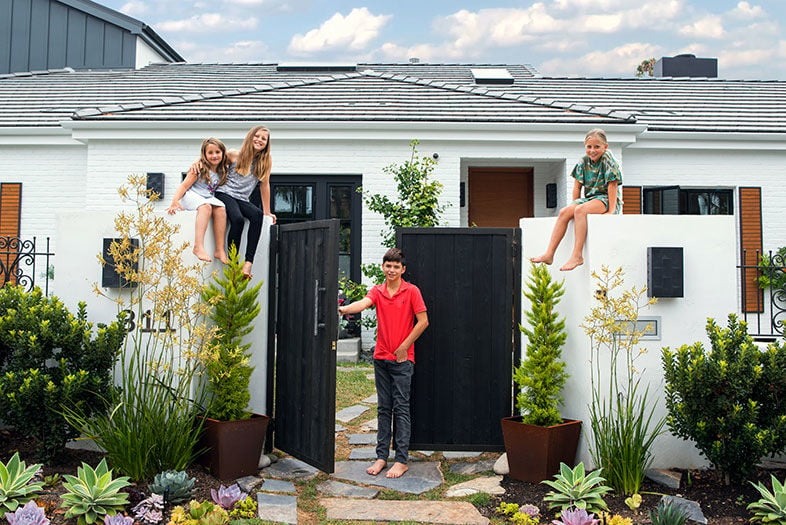 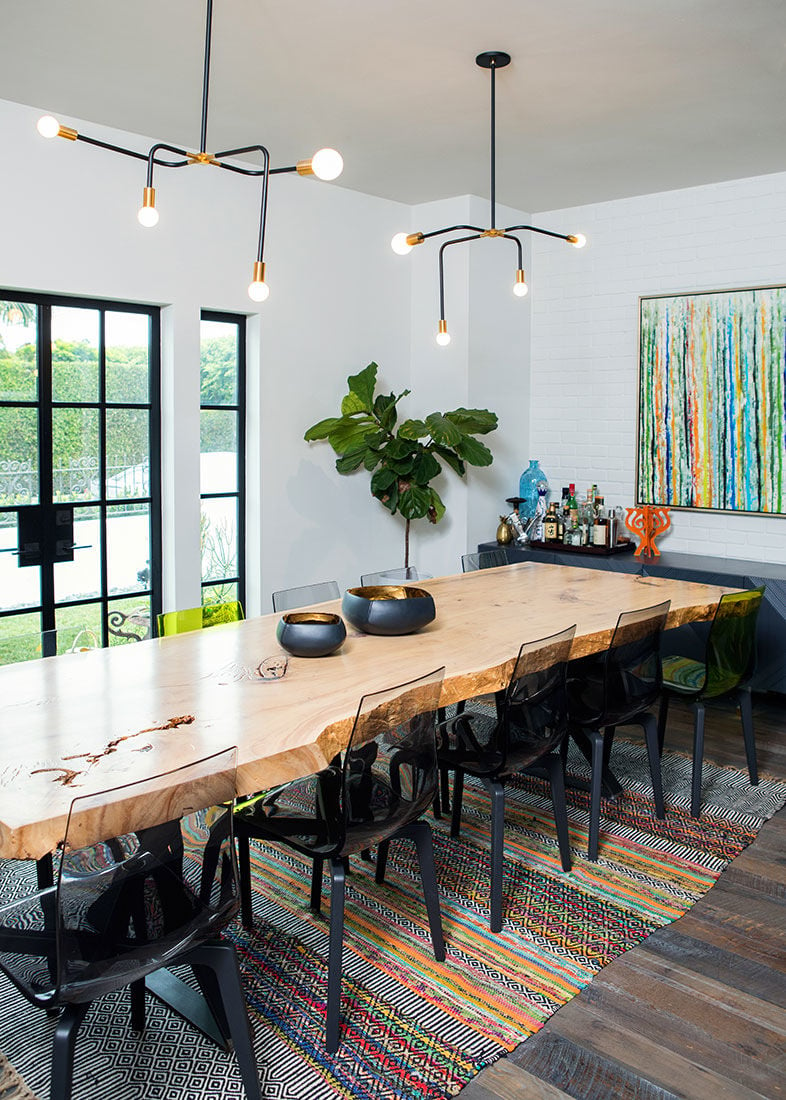 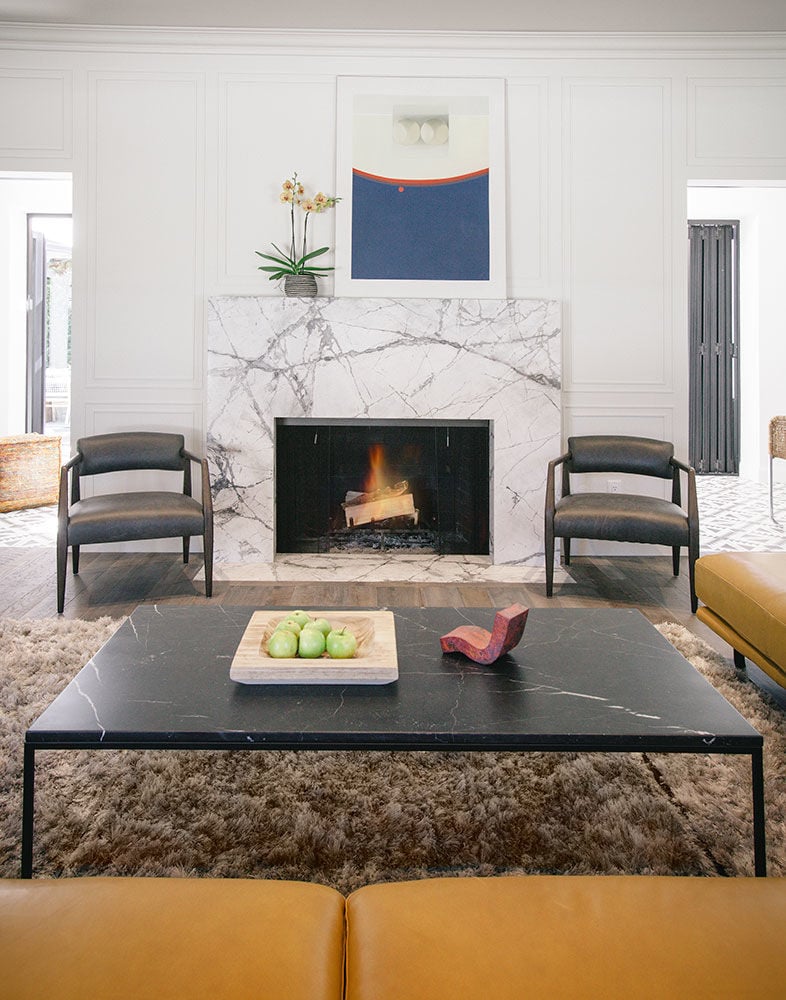 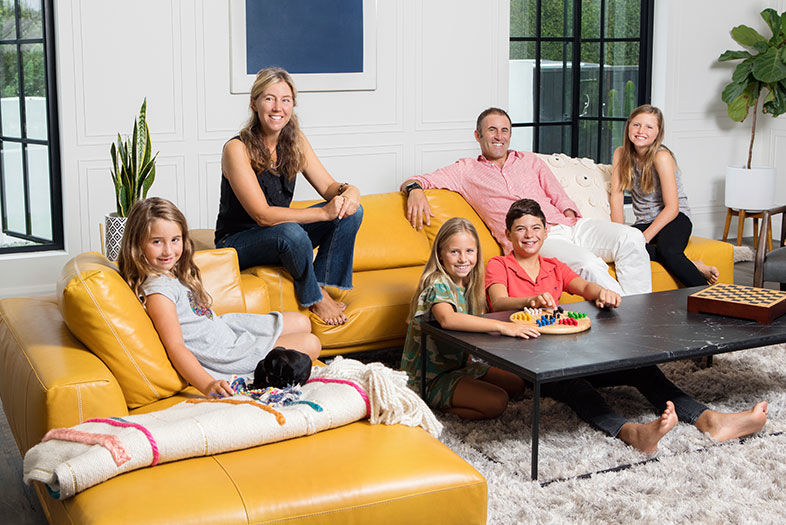 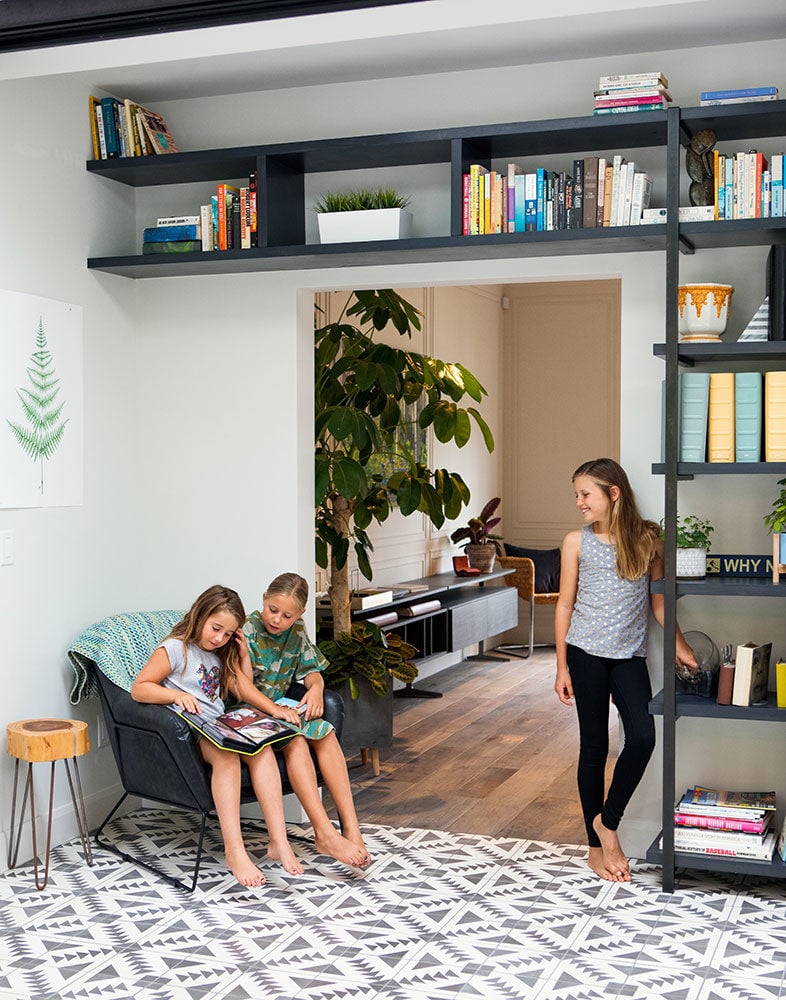 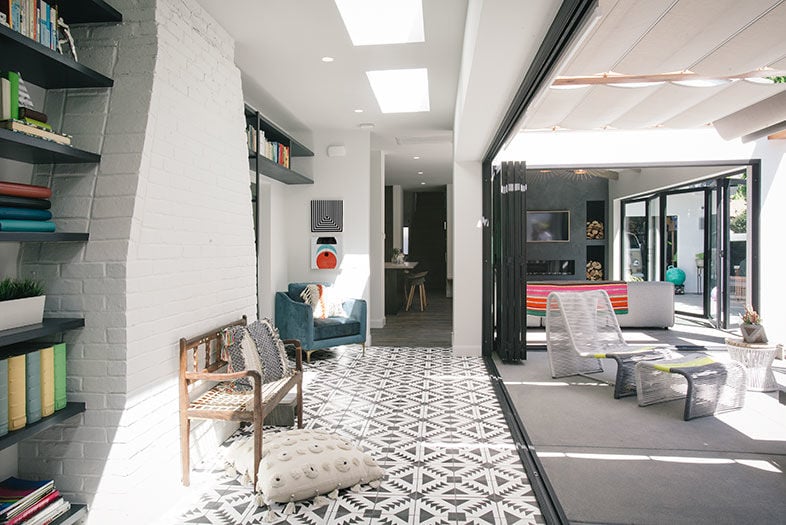 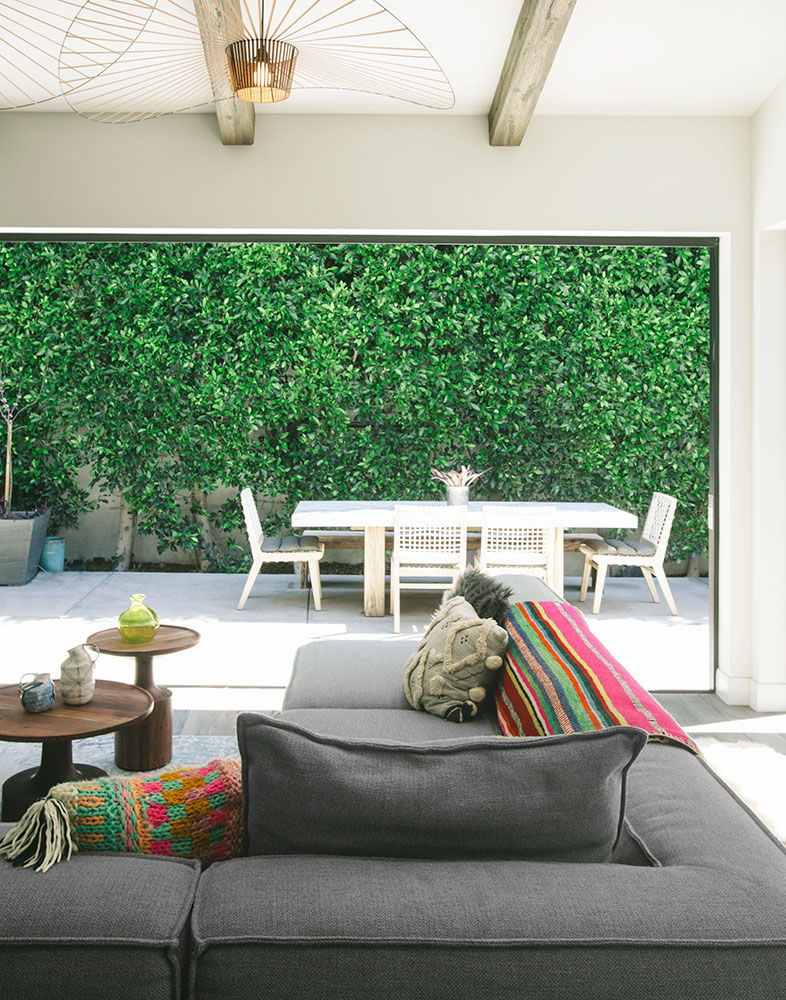 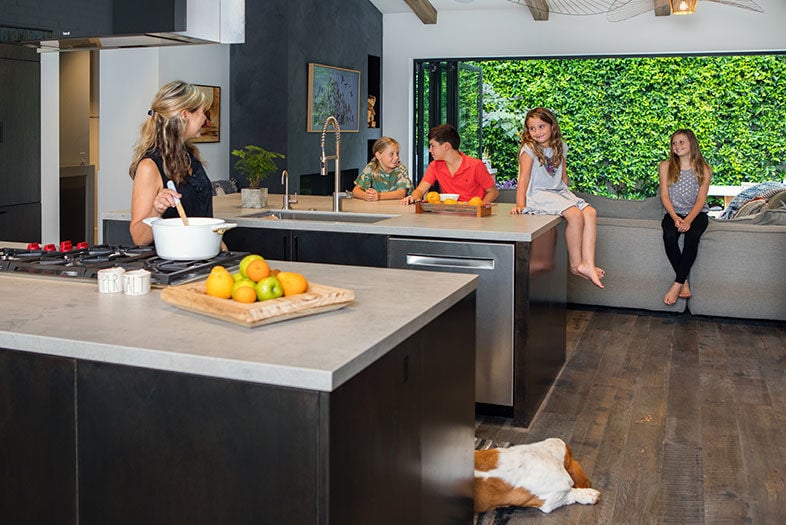 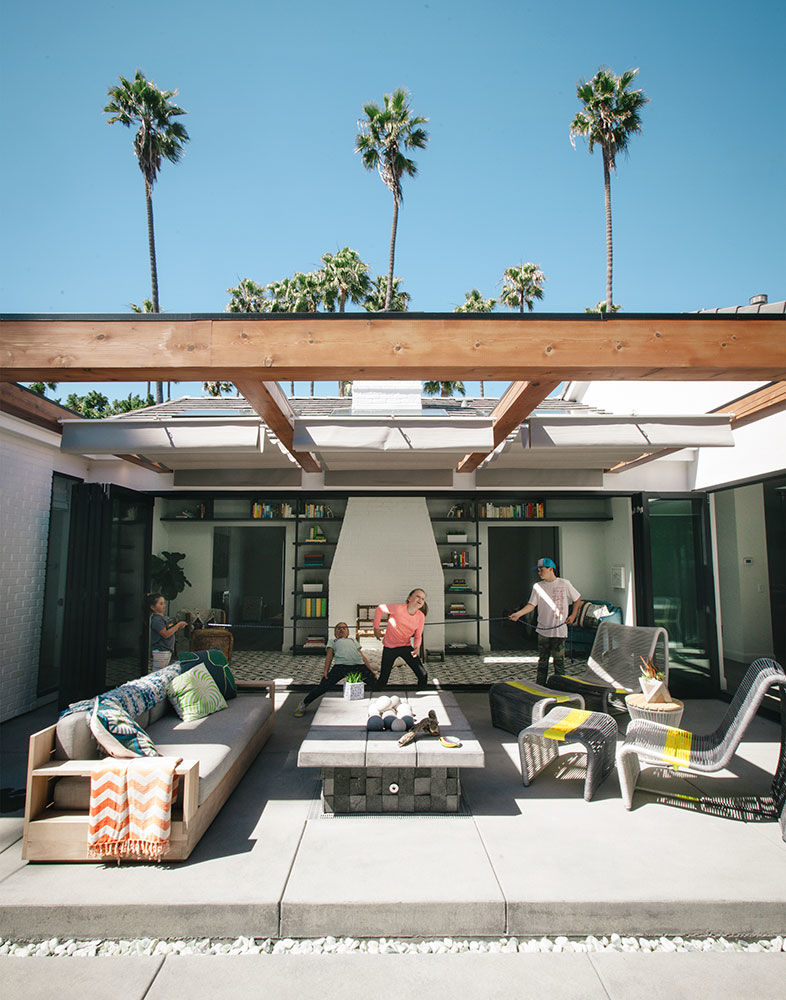 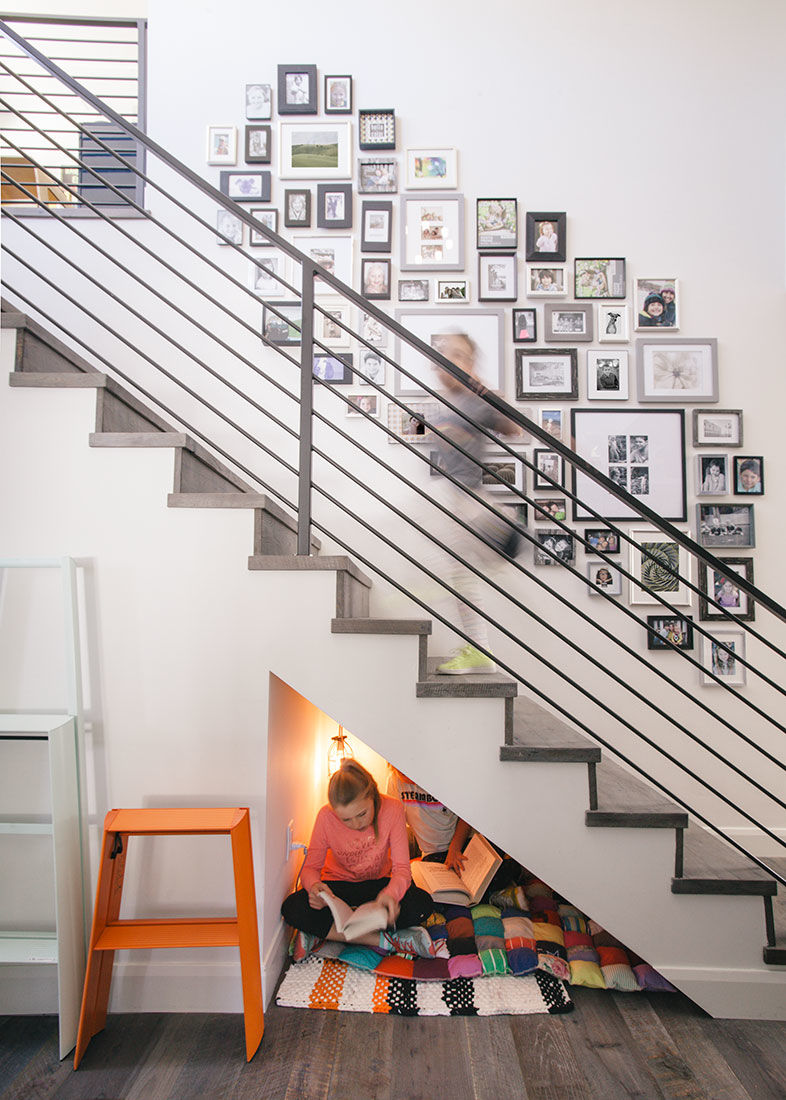 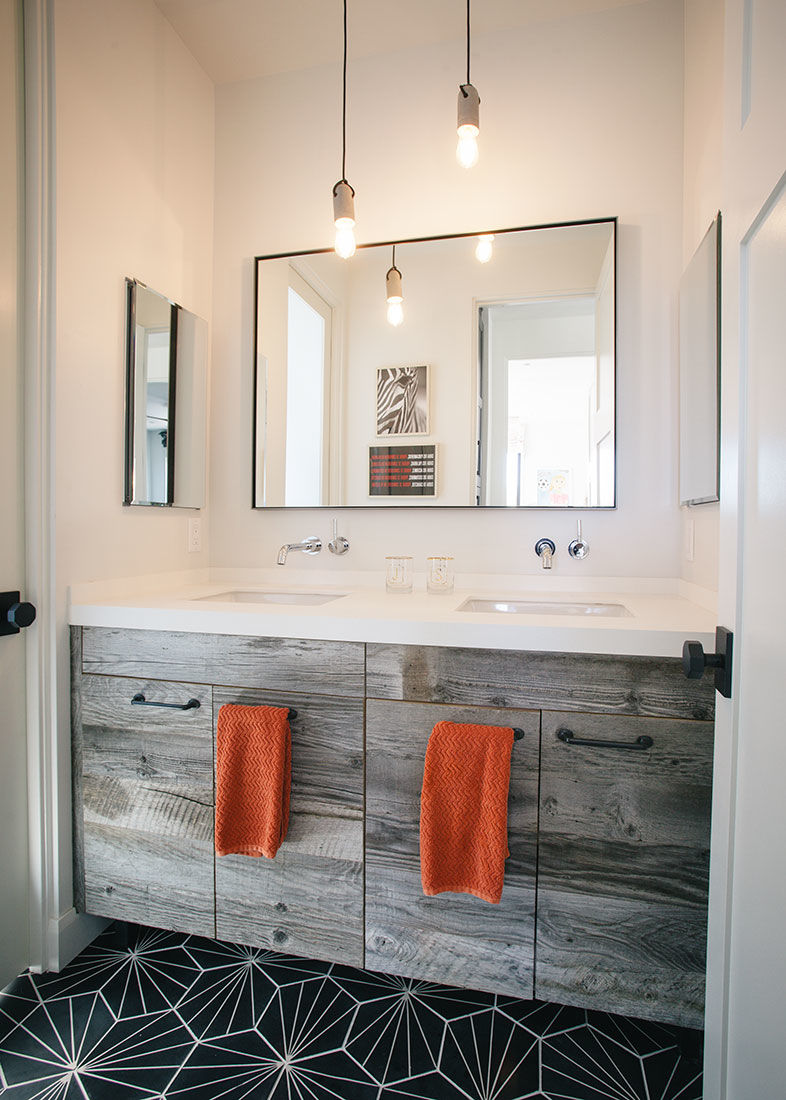 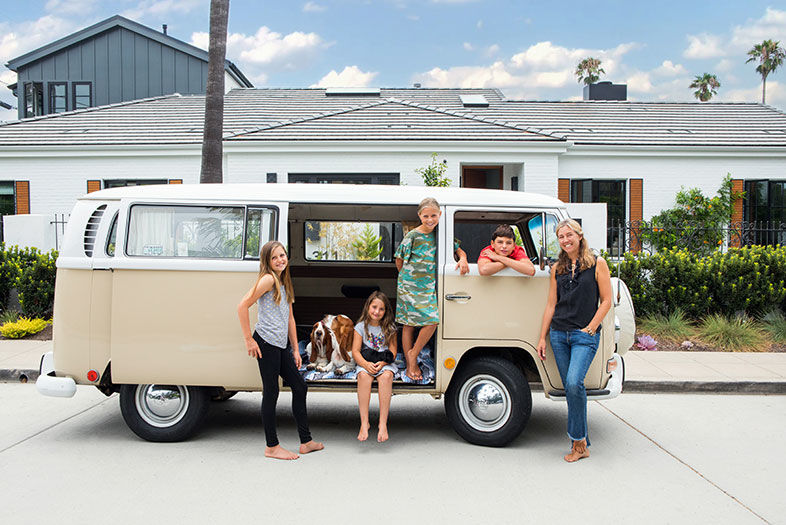 From the first swipe of your feet on the Gabriels’ front doormat—which reads "Shut the front door"—you know they’re not your average family. "They’re cool," says interior designer Lorena Gaxiola, who has traipsed over that mat many a time. "They’re total rule breakers."

Most rooms have different tiling, for instance. The bathroom cabinets, made of reclaimed wood, don’t line up perfectly. The chimney isn’t level to the ceiling. And then there’s the marble dining table in the backyard.

"The marble probably shouldn’t be outside, because we have to clean it every day," admits Dana, a private Spanish teacher. "But our house is all about imperfections. It’s better if it’s a little quirky."

"That describes us," says her other half, Danny, a real estate developer.

The all-white cookie-cutter cottage they purchased a decade ago did not, though the Bird Rock property’s selling point was its proximity to their parents and the beach.

"We wanted to remodel it when we first moved in," Dana says, noting they had to pivot their investments once they had kids—Jake, now 13, Sadie, 11, Zoe, 9, and Vanessa, 6.

Ten years later, she and Danny admit the reconstruction was worth the wait.

"We loved and lived in every square centimeter of the old house," Dana says. "We couldn’t bear tearing it all the way down, because that would have been reinventing the wheel. By working with the existing footprint, we knew so much better how we wanted to use the house."

They called on McKinley Associates to smash 50 percent of the walls to the foundation—the family room and master bedroom were mostly untouched—for a more open layout through the dining room, kitchen, main room, and patio to serve their maturing family.

That also involved a 1,200-square-foot extension, including four bedrooms, two baths, and a laundry room that attaches to the garage, which houses a bike for every member, table tennis, and a 1968 VW bus.

"It’s obviously a dog mobile," Dana says, gesturing to the beds inside for basset hounds Lucy and Ethel and—the youngest kid—a pug named Oscar. On the weekly, you can see the family piling in and out to ride to their favorite beach, Windansea, but not for sunbathing.

In fact, almost every family member has completed a triathlon through the Challenged Athletes Foundation, an organization that’s dear to the family, as it raises funds to provide medical equipment to people with disabilities so they can live an athletic lifestyle.

"Danny has one hand," Dana explains. "Even though he doesn’t consider himself handicapped—he’s super athletic—it’s been a big inspiration to him, me, and now our kids and friends. It seems like every year we’ve gone to the [annual triathlon] event with more children in tow."

Now they return home to a house updated to their active lifestyle. There’s a shower in the backyard for rinsing off, and the first floor has all cement tiling and reclaimed hardwood floors to withstand wear and tear.

Dana explains that the design was centered around her wood and tile choices, and on the yellow Natuzzi Italia sofas she procured from Hold It Contemporary Home for the family room. "Those pretty much directed everything else."

Gaxiola’s job was to pare down Dana’s ideas and Pinterest boards, balancing Scandinavian and bohemian styles as she went. Her 20 years of interior design has spanned projects from San Diego (like The Park condos in Bankers Hill) to Australia (where her firm and home goods collection is now headquartered), and in all that time, this was only the sixth private residence she’s worked on. "I find residential design to be very personal," she says. "It’s only for people I know." Thanks to longstanding partnerships with Danny’s business, she’s come to consider the couple as close as her own family. "I was hired more as a stylist, because they already had a strong idea as for what their family required. Being modern and funky, Dana wanted almost every room in the house to be different, and she created these beautiful spaces. I just needed to help her curate it, to make sense of all of her ideas. She deserves all the credit. The success behind this project really lies in a happy family."