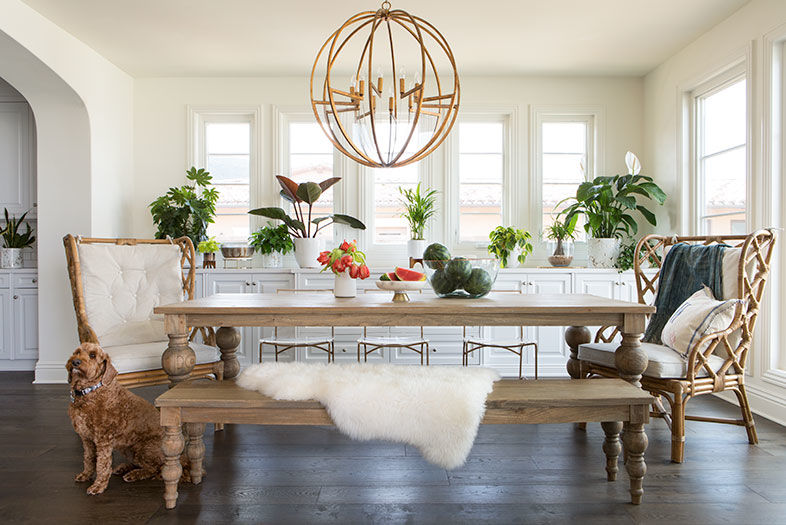 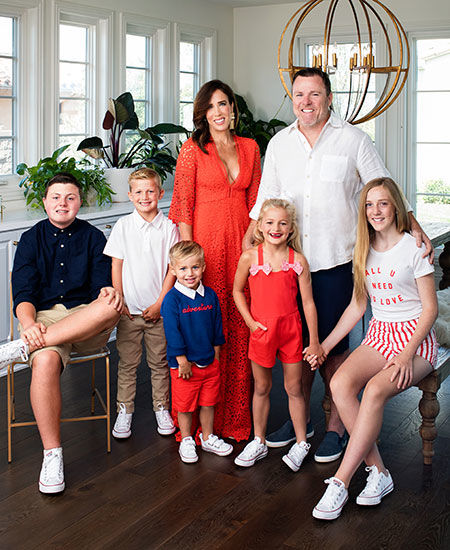 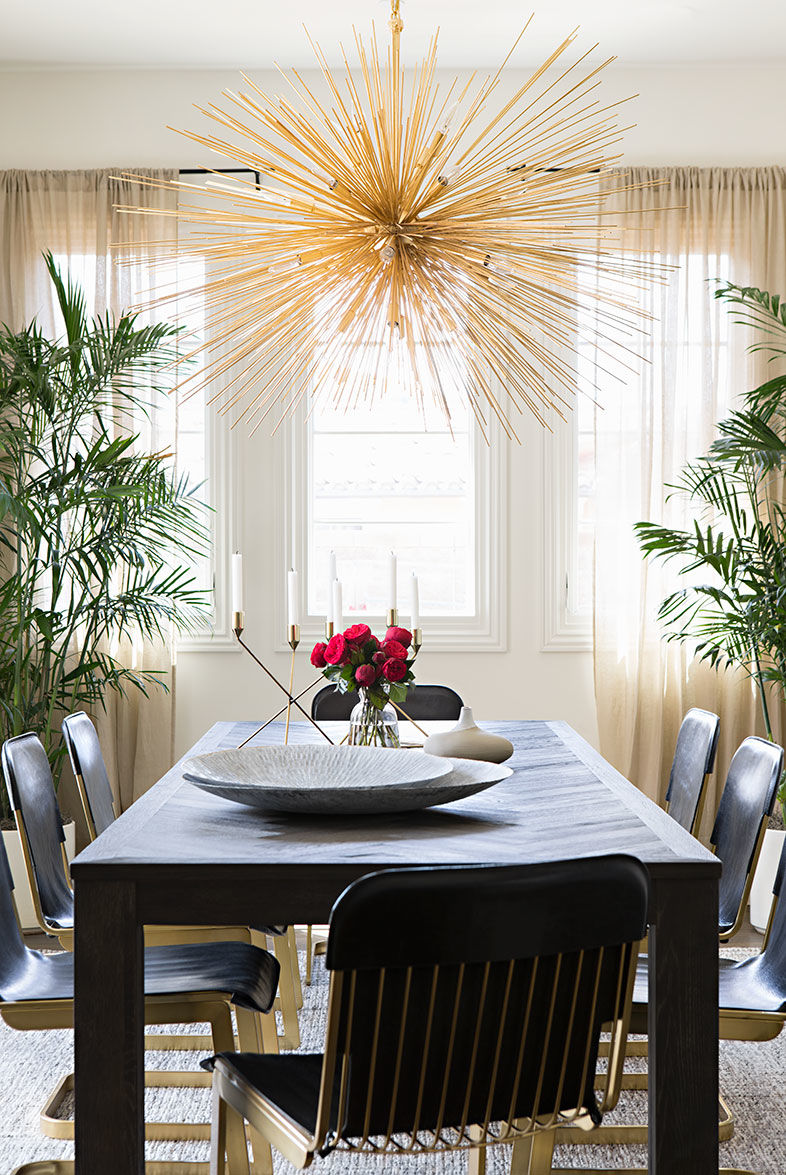 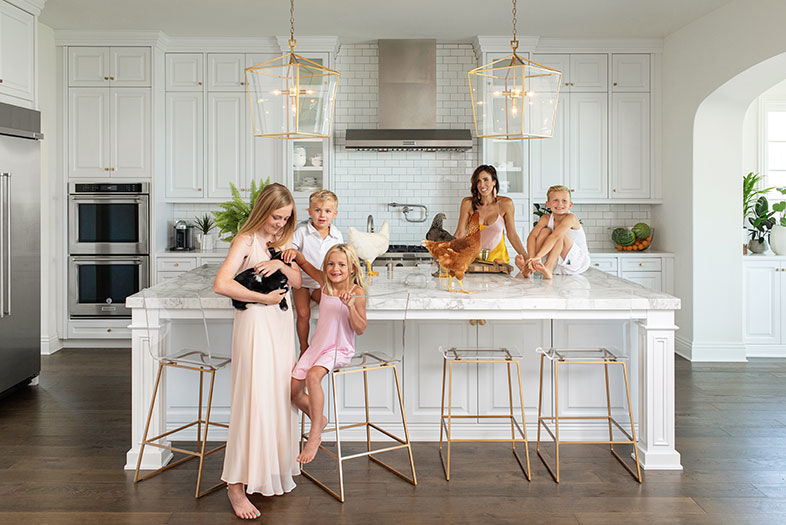 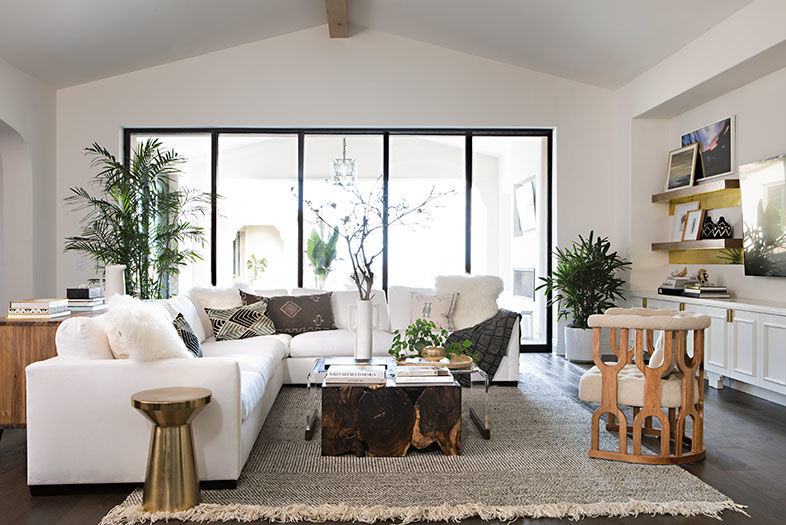 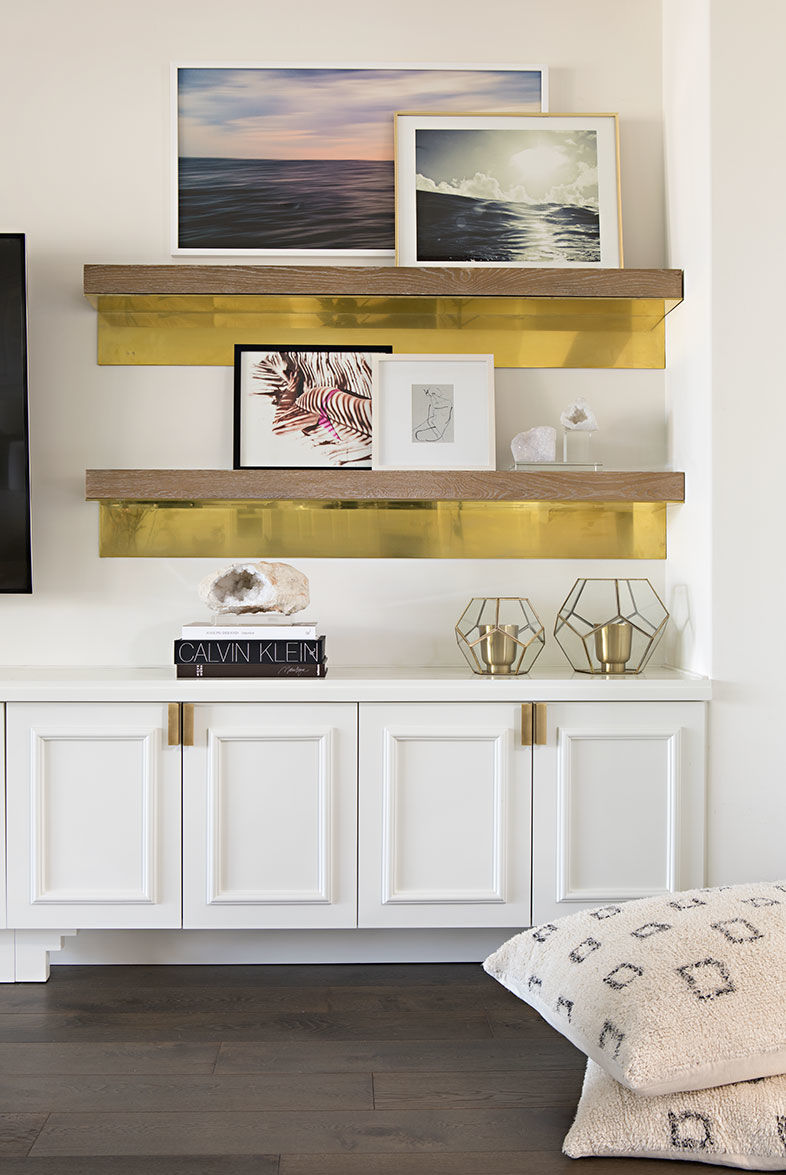 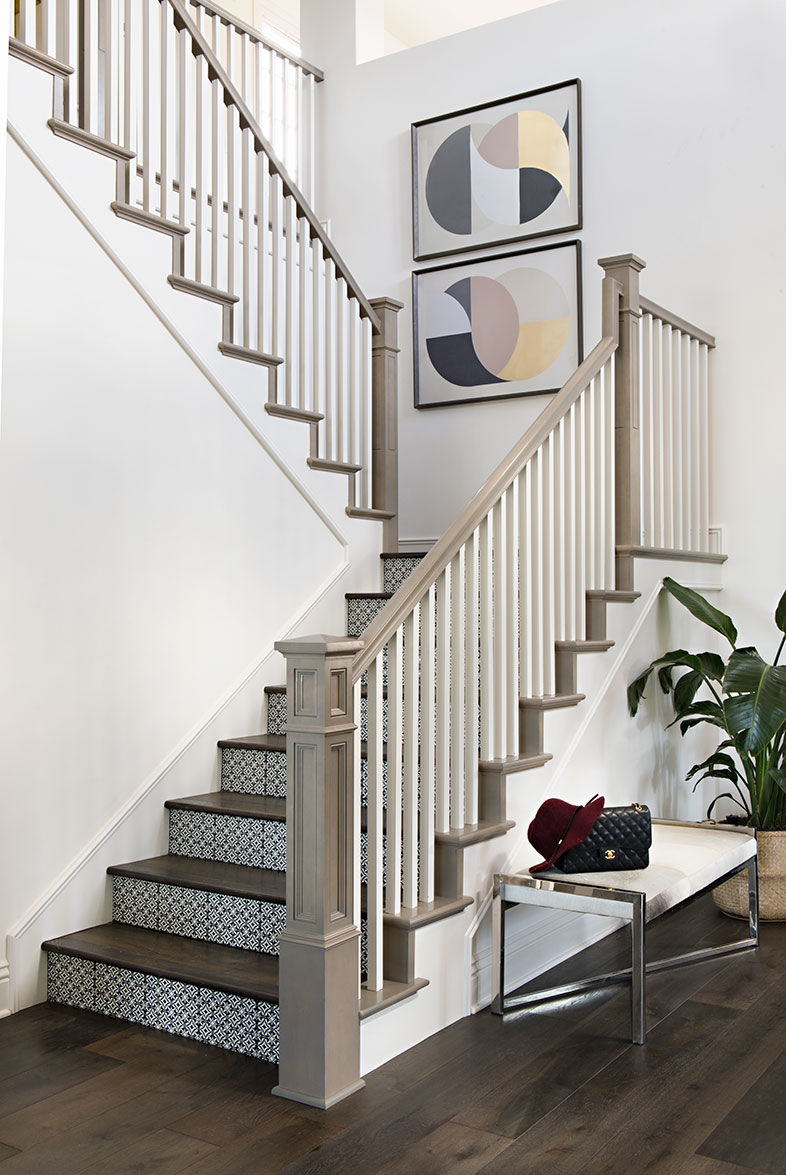 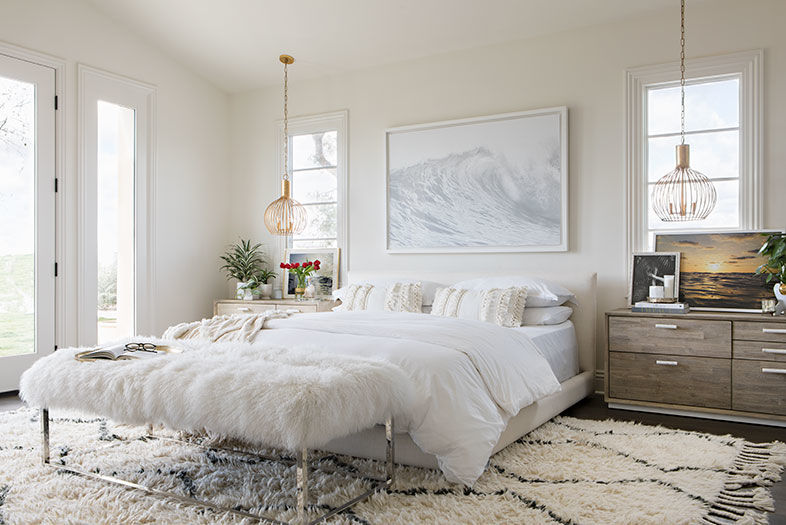 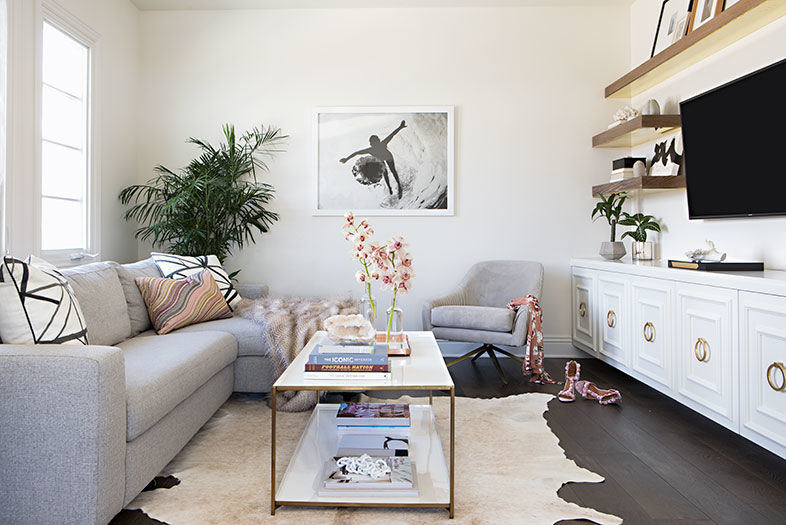 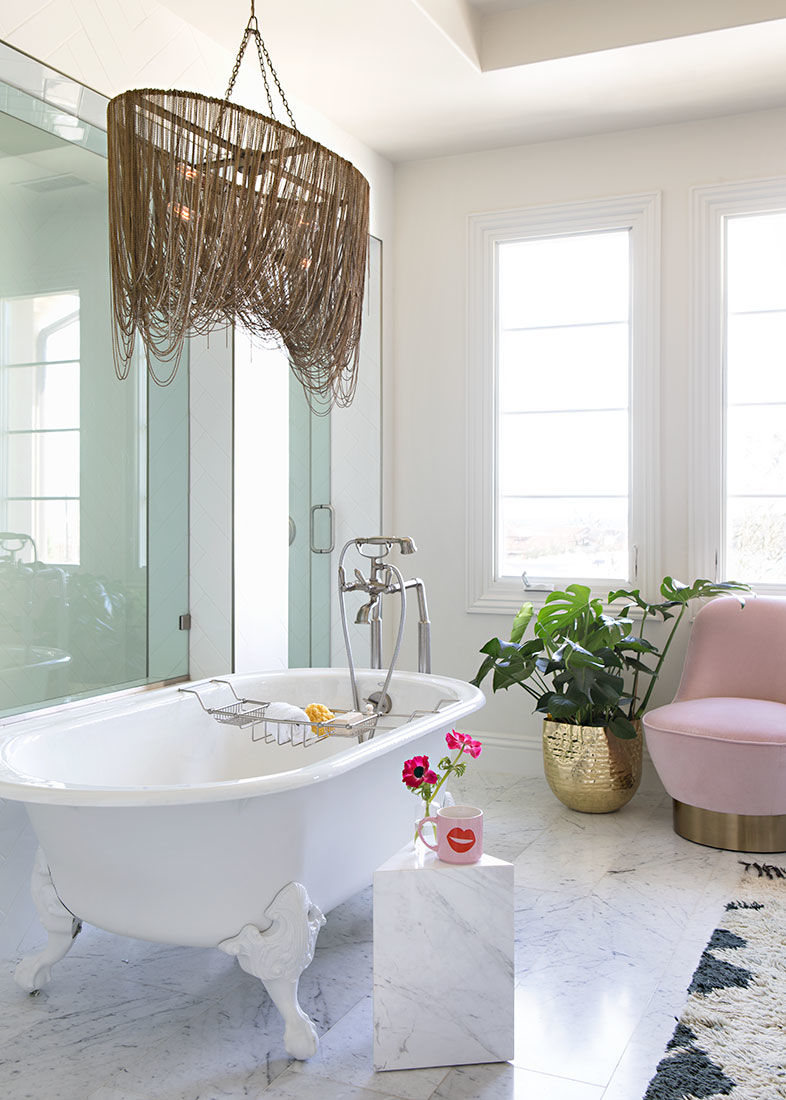 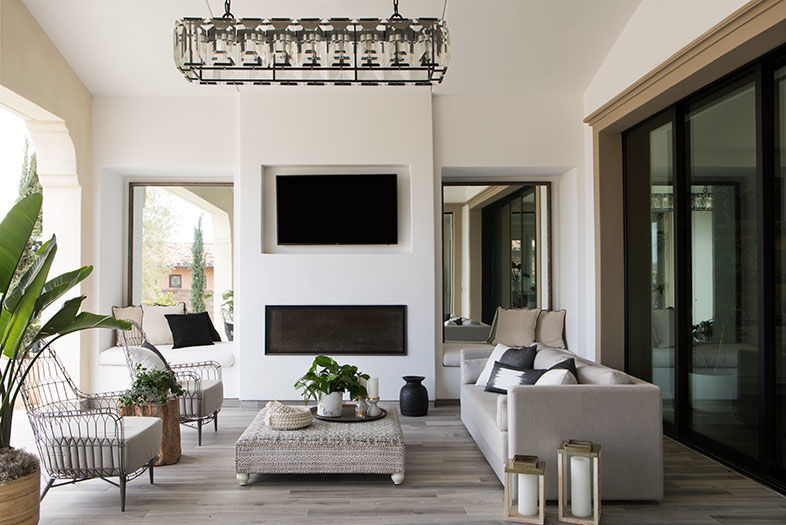 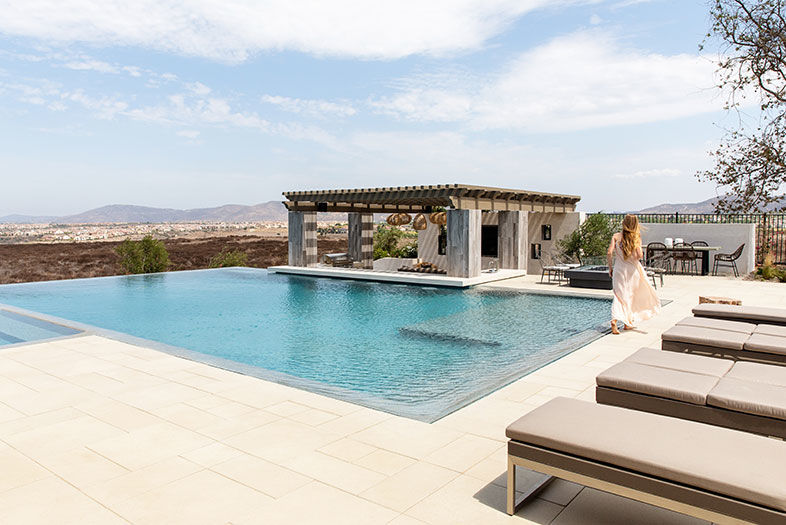 In a room steeped in elegance—a marble island, acrylic bar stools, all-white cupboards, and gold light fixtures—her family is making a hubbub over two small brown eggs. They’re something others might consider totally unremarkable, but on this day they’re the family’s most prized possession, because they’re the first two laid by their chickens.

"It’s important for them to understand patience, the result that comes from planting their own seeds, growing something," Nova says, alluding also to their two goats and the vegetable garden that runs along the side of the Del Sur abode.

"You’re not going to have all this on the coast," adds Hagan, who moved inland from Encinitas this spring.

While Nova called all the aesthetic shots on the 6,075-square-footer, a new construction project that wrapped in April 2017, Hagan has balanced his other half’s high-end tastes from the start, advocating for practicality.

And that’s where interior designer Kelly Hinchman, principal of Studio H Design, stepped in to realize their combined vision.

"We wanted a chic white palette [that evoked] a vibe when you enter the home of instantly feeling glamorous and beautiful in the space," Hinchman says. "But we had to be conscious of the biggest challenge of all: six kids!"

Through the front door, past the front casita of Matthew’s room, the interior clamors with California modern details. The formal dining room is a story in light and dark. A gold chandelier by Kelly Wearstler glows above the dark-hued table and chairs, also accented in gold.

Past the all-white kitchen, the second dining room borders on bohemian, with a light wooden table, bench, and rattan chairs from LA’s Dovetail.

The living room, its ceiling fastened with white oak beams running up to pocket doors that extend the inside of the home out, also sings in neutral hues, like the white couch. It’s still a small point of contention between the couple, but Nova calls it a "litmus test."

"It’s been a joke between us," she says. "To me, it’s a reflection of respect for things. I figure if you can keep a white couch white with six kids, you’re being a good parent. I don’t know how that’s turned out."

For the record, the cushions are basically spotless—impressive, considering she’s no stay-at-home mom. She’s the founder of Bespoke Partners, an executive recruiting firm. Hagan has a similarly demanding job as CFO for MedeAnalytics, which leaves him splitting his time between his home office (in their second casita) and Dallas most weeks.

Those demanding schedules, Nova says, were all the more reason to ensure their house would be one they want to spend time in, and a place that conjures a sense of calming.

In the master bedroom, a neon sign from her old office—Hinchman helped redesign her new one—with the words "Ain’t nobody got time for that" faces the plush white bedding. It’s the first thing the parents see in the morning. The rationale? It’s kind of a TV replacement.

"Ain’t nobody got time for a TV in their bedroom," Nova jests. And when she does choose to unwind, you can find her in the attached master bath.

"My bathroom is my sanctuary," she says. "That’s a very happy place for me, no children, in my clawfoot tub with candles."

But she and Hagan both agree their favorite place isn’t hiding from the chaos of their newfound Brady bunch, it’s being a part of it—which usually happens in the backyard.

Past a patio area meant for kicking your feet up from the gray furniture set, there’s a rectangle of turf that Parker has turned into a soccer field. Around the corner is the vegetable garden and a little habitat for their livestock. And tucked away from the infinity pool is what the younger kids call "the park," their playset.

"There’s space for everyone," Hagan says, including his own refuge: his favorite brews on tap at the barbecue. "This is where we’ll be making memories."