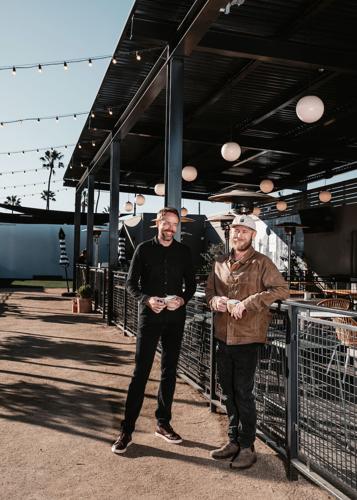 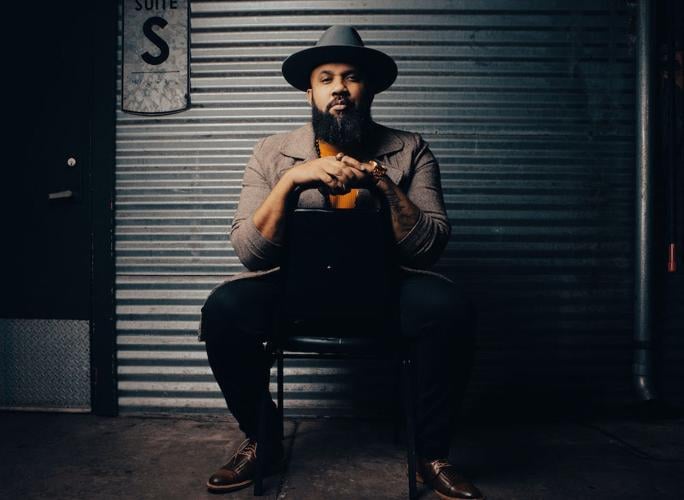 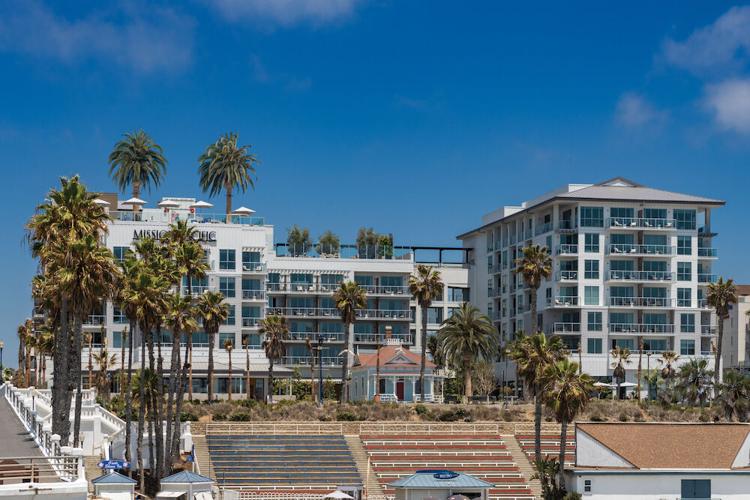 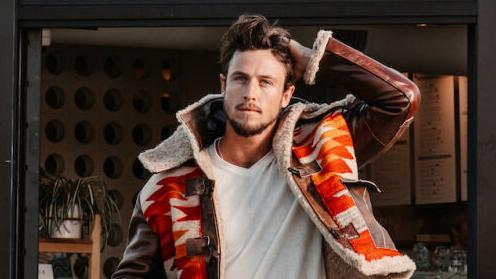 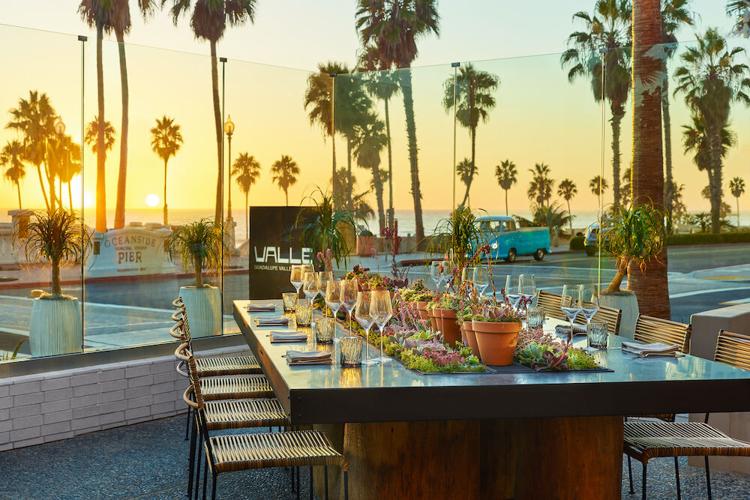 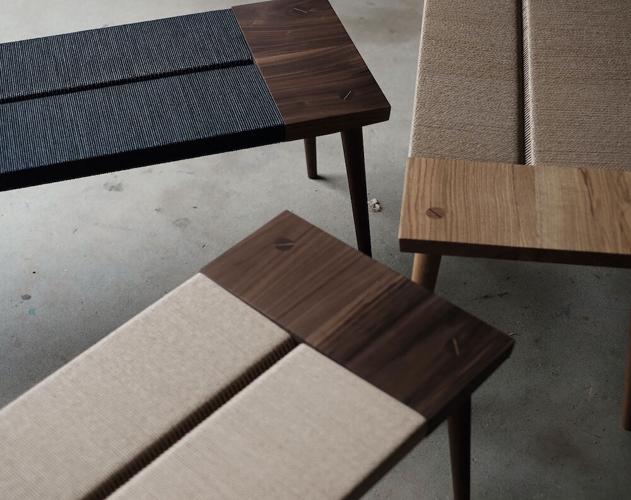 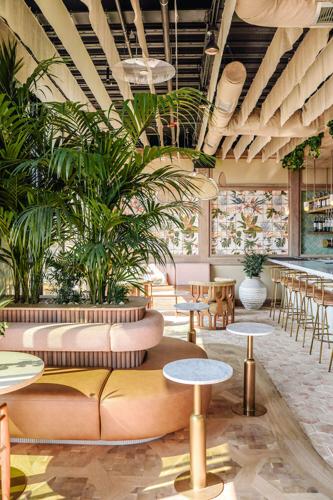 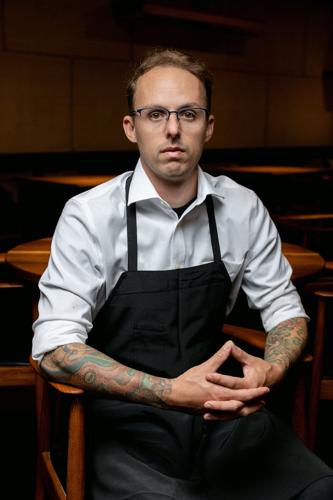 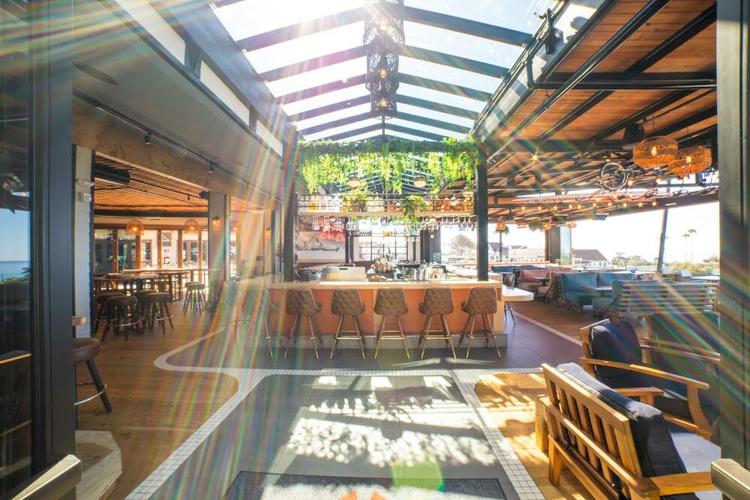 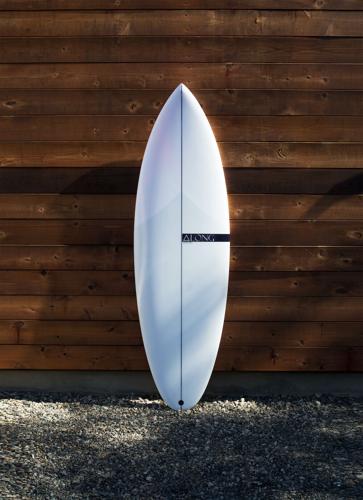 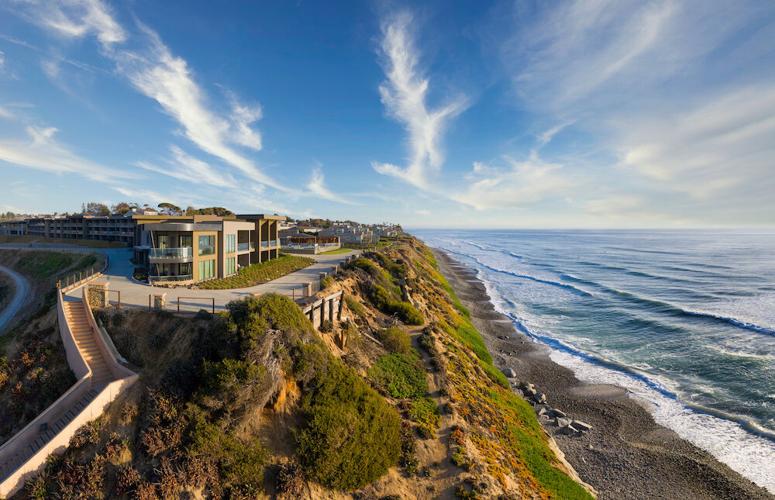 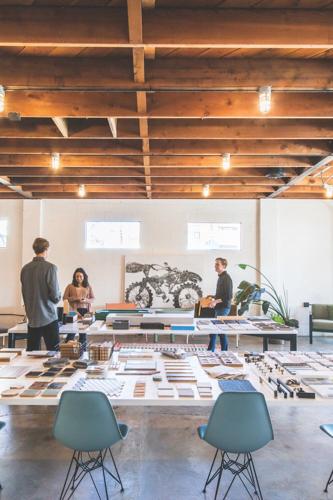 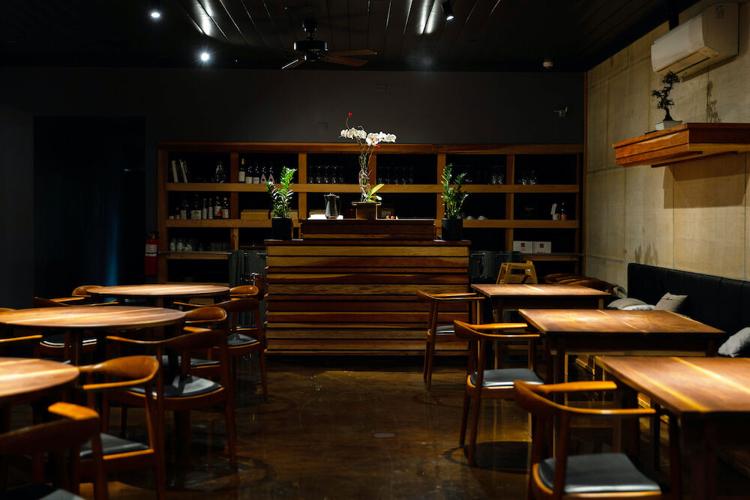 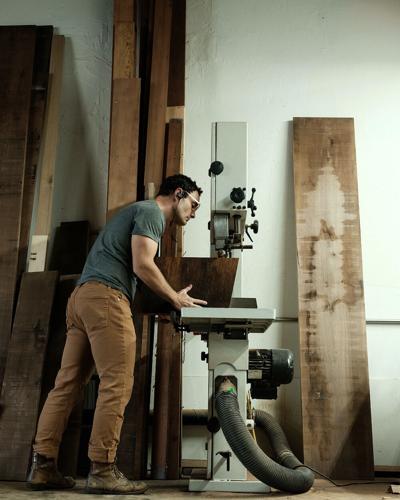 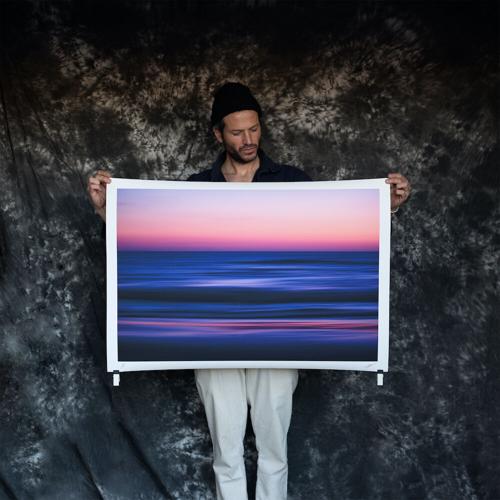 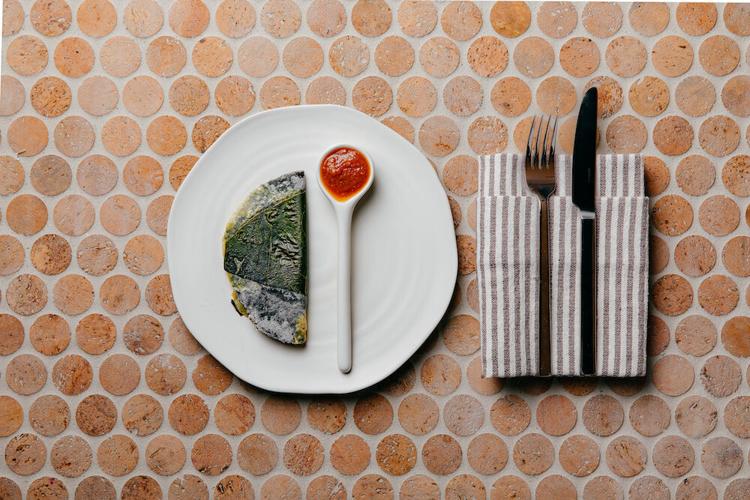 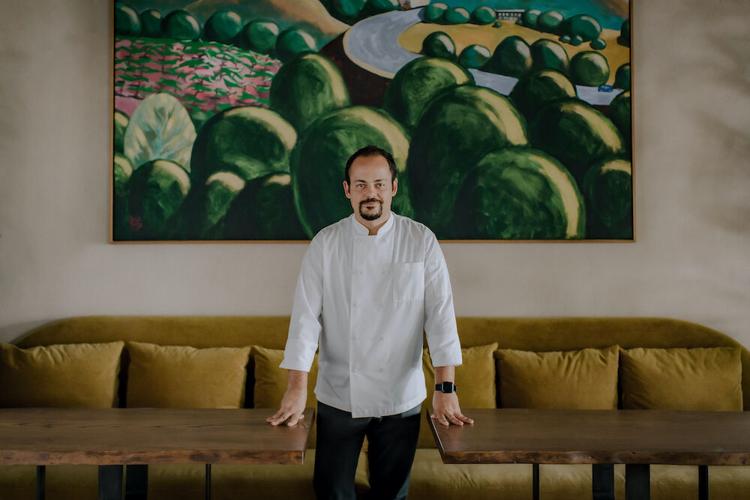 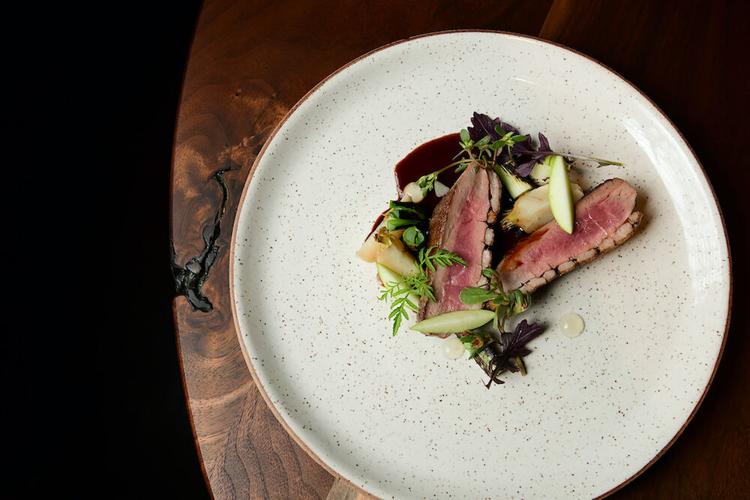 It's on. There has never been a more exhilarating time to explore the city's upper half. Meet the doers and culture-makers at the new vanguard of the north.

The ratty quilt Tristan Detwiler upcycled into a jacket for morning surfs at Pipes in Cardiff? A version of the old thing landed at the Metropolitan Museum of Art. So, yeah, that’s the abbreviated success story of the 24-year-old Encinitas native and USC engineering major turned fashion designer behind Stan. His artisanal luxury garments, made from quilts and antique textiles, were featured across from Ralph Lauren at In America: A Lexicon of Fashion, a Met exhibition curated by Andrew Bolton. With his third New York Fashion Week collection under his belt, he and his mother attended the exhibit preview and Met Gala alongside Anna Wintour and Thom Browne.

“I’m a very DIY person,” says Detwiler, who spent his youth in Olivenhain crafting in his mother’s art studio. “I got into quilting because of my baby blanket.” Today, he’s a member of the Bumann Quilters of Olivenhain, an otherwise-ladies-only group, while going farther afield for global textiles.

“The most worn, and the most mended are the richest of them all.”

“There’s power in a corner,” says Brendan Foote (left), one of the developers behind Fabric Investments. He would know. Having cornered the market on adaptive reuse from South Oceanside to State Street in Carlsbad, Foote and his business partner Curtis Clave (right) are transforming fallow blocks into vibrant arteries. Tremont Collective, a strip of former mechanic shops off Coast Highway, is a remarkable reset. Anchored by Communal Coffee and with Brixton and Bottlecraft, the hub is thriving thanks to a diverse mix of tenants and ample outdoor space. “It’s about keeping the soul and character of the neighborhood,” says Clave, “and refining the story.” It’s a thoughtful ecosystem that’s spawning a similar concept in the forthcoming Freeman Collective in “South O,” as locals affectionately call it.

Located on Vista Way and Freeman Street, the dazzling F&B lineup includes HomeState, Artifex Brewing, and Blackmarket Bakery. Meanwhile, Nick’s on State is banking on Carlsbad, set to open across from Jeune et Jolie, one of Fabric’s early success stories.

Valle de Guadalupe is a magical stretch of earth. Baja’s wine region (90 minutes south of the border along the coast, turn left) has become an R&D lab for some of the country’s top winemakers and chefs—like Roberto Alcocer, who made his name at his flagship, Malva. For Valle, he brings that modern Mexican food/wine alchemy to Oceanside. This isn’t a lark Alcocer moved his family here to oversee the ocean-view restaurant; he’s working with local farms and aiming for a Michelin star. While some cuisines don’t survive relocation (see: NYC bagels), Baja and San Diego are one super-region. Whether it’s the rabbit taco (slow-cooked carnitas style, then compressed back together to sear and caramelize) or the ash-rubbed wagyu with leeks confit in bone marrow, it’s a big step for the city’s Mexican food.

It’s just cabbage. You’ll keep telling yourself that as you try to wrap your head around why the humble green is blowing your mind. They juice the cabbage, reserve the pulp, sauté it, steep the juice with kombu and fresh herbs, stuff it back into charred cabbage leaves, dress it with sesame oil and togarashi, place it in a bowl with caviar and cabbage dashi (broth, the soul of Japanese cuisine). It’s a 100-percent cabbage gyoza, and in that singular bite you understand why Matsu from chef William Eick is special. Eick has been a rising talent for years, and Matsu is his arrival—a multicourse tasting experience paired with sakes and wines. The dimly lit room in South Oceanside (former home of The Flying Pig) is elegant minimalism, and every table gets its own spotlight. Which feels right, because this is art.

The “family” portrait by photographer David Lopez has little to do with grins. The moody grouping of palm trees on the Swamis horizon is a popular print from his Earth Series Collection. The longtime surfer, skateboarder, and landscape photographer, born in Spain, settled in Encinitas a decade ago. A master craftsman, he makes each surfboard and skateboard by hand for pieces that are utilitarian but double as decor.

Sustainability is top of mind using reclaimed or recycled woods for skateboards (maple, Peruvian oak) while the surfboards are made with eco-forms (recycled polyester or epoxy). The process takes months, using old-school techniques and his architecture background to create modern heirlooms that have been featured in Vogue, Vogue Spain, and Harper’s Bazaar. Next up? A collaborative black-and-white photography project with his favorite Leica Camera.

At a new showroom in Encinitas, readers won’t have to be a paying client to check out the finishing touches favored by a pair of in-demand North County architects, married couple Lindsay and Rory Brown of The Brown Studio. SOTA (for “State-of-the-Art”) is like a vision board gone vibrantly tactile.

“We had all of these elements of design that go into the architectural and interior design aspects of our projects,” says Rory. “And you couldn’t see and touch and feel them!”The solution? Create a community-friendly space in their lofty studio HQ, housed in a vintage warehouse-style building, which showcases a curated selection of their global finds, from their go-to picks of Caesarstone, to pieces by Encinitas artist Tait Hawes of Sons Studio. “We wanted to create a hub in North County that would celebrate all the different arts we love: architecture and interior design, but also a place for artists to present their work and bring the community together.”

Fresh off a cover story in Furniture & Cabinetmaking magazine, Kylle Sebree is making headlines everywhere. This summer, he’s opening his high-design studio in downtown Carlsbad, further raising the aesthetic bar throughout the Village and State Street. Known for his masterfully reductive woodworking style, he takes timber, walnut, and white oak and transforms it into sophisticated benches, tables, credenzas, and even (coming soon!) headboards. He’s become something of a wunderkind in the design world for his coastal midcentury collection, fulfilling custom orders from architects and designers from all over the US (including June et Jolie owner John Resnick) and making local fans such as Rancho Santa Fe interior designer Amy Meier.

Not to overstate it, but Mission Pacific Hotel just might be the burgeoning HQ for the best of Oceanside. First, there’s the quintessentially California modern vibe at The Rooftop Bar, which just wrapped up a stylish refresh this month and is kicking off a DJ series starting in June. Speaking of good beats, the hotel recently hailed local soul musician Shane Hall (creator of “The O,” Oceanside’s unofficial anthem) to be the hotel’s musician-in-residence. During his stay, he is recording his next album, performing at various venues on site, and taping a behind-the-scenes docuseries that will also cover his performances at Coachella and Red Rocks. Out in the hotel courtyard, witness even more cinematic history at the Graves House—or as locals lovingly call it, the Top Gun House, since parts of the iconic 1986 film were shot there. The house underwent an award-winning renovation to serve as a new decadent dessert bar just in time for the much anticipated Top Gun: Maverick release in May.

Treat yourself at Spa Alila. Alila Marea’s spa haven just got better with Sangha: Circle of Wellness, a three-tiered membership of year-round treatments, pool access, and perks. Or if self-care looks more like a four-course meal, stop into Vaga for bagna cauda clams and a chocolate bombe.

Someone finally cracked the code on one of the most prized—and maddening—locations in San Diego County. Even with its huge ocean view at the corner of Camino Del Mar and 15th Street, the space was haunted for years by an awkward, closed-off, segmented layout. Social Syndicate blew it wide open in 2020, and now it’s a sprawling, open-air, ocean-view restaurant breathing new life into Del Mar. Monarch has become the steadfast neighborhood hub for craft cocktails (dragon fruit margaritas, blueberry mules), weekday happy hours with $5 specials, and Sunday brunches complete with freshly shucked oysters and mimosa kits. Aside from the main restaurant, the coastal hangout has a rooftop deck with fire pits and Adirondacks, complete with a breezy casual lounge area that connects the two.