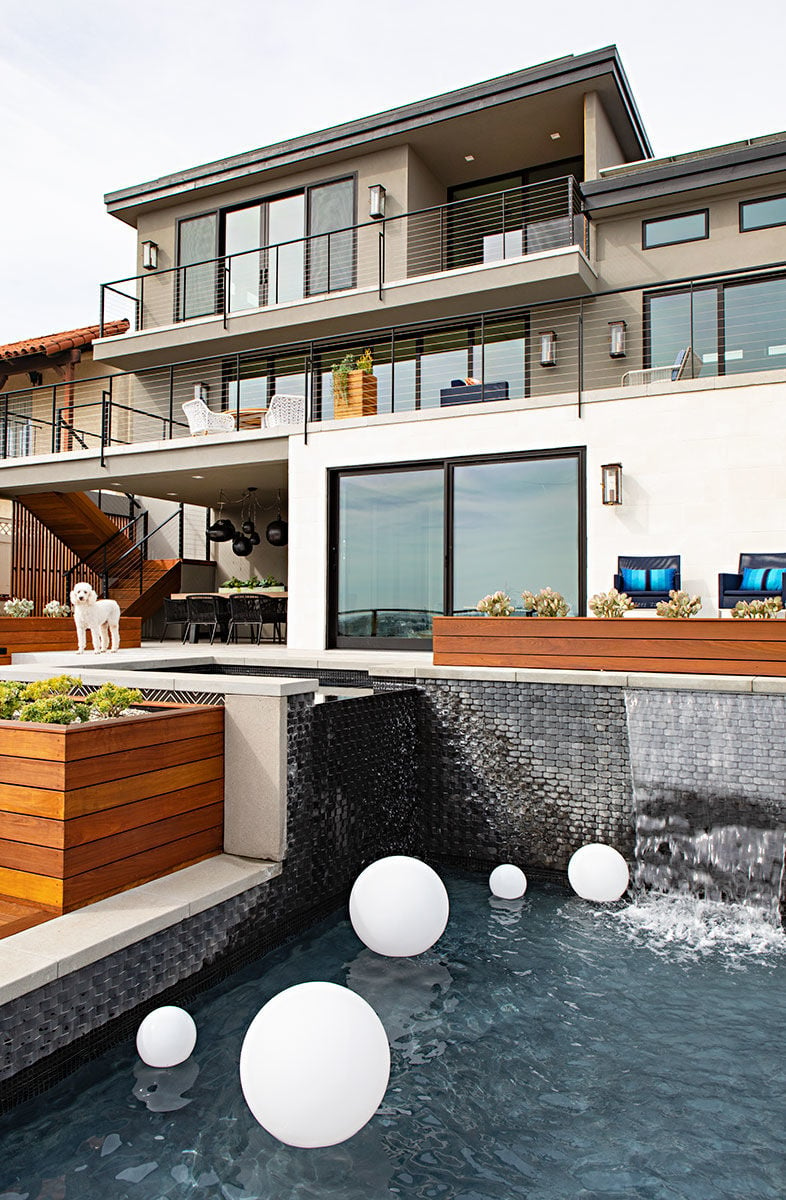 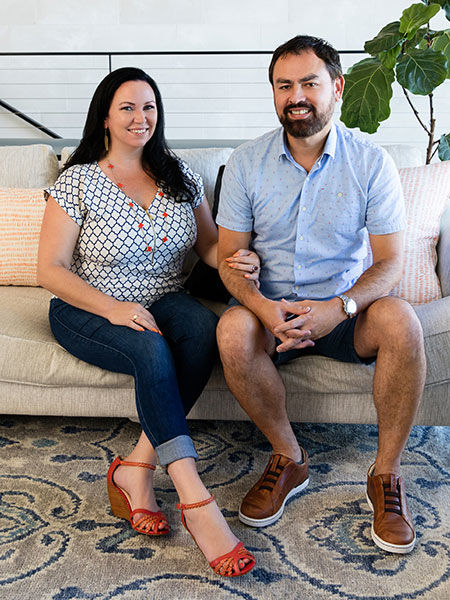 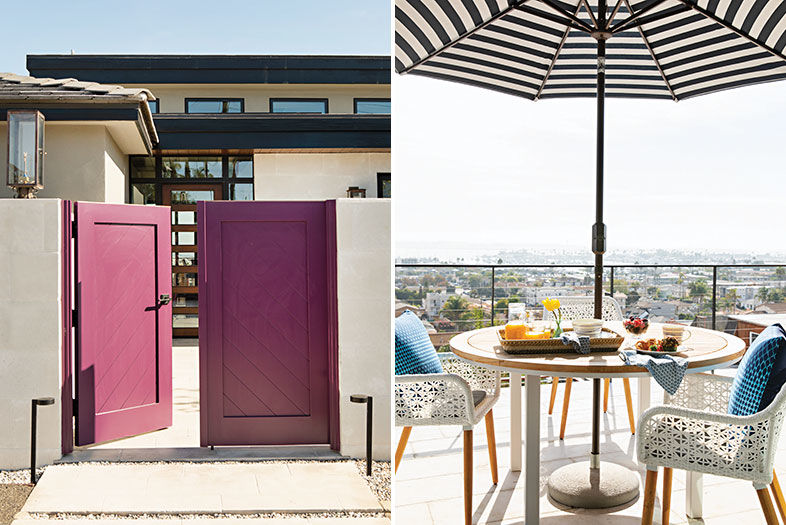 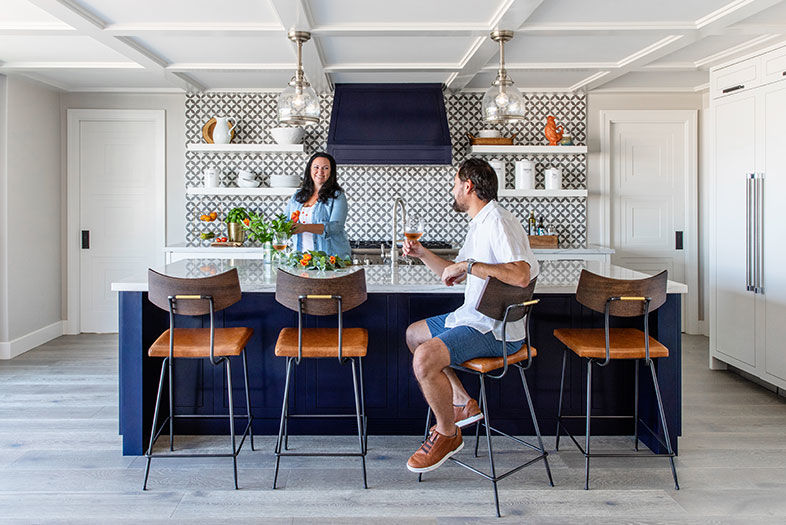 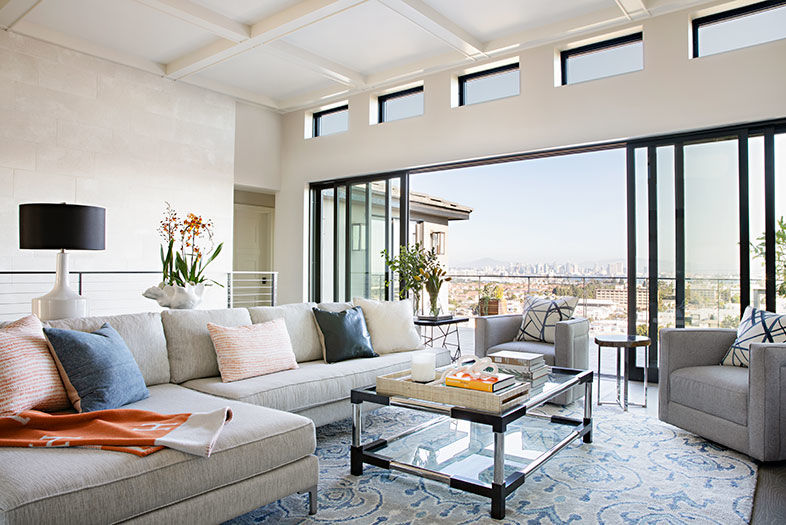 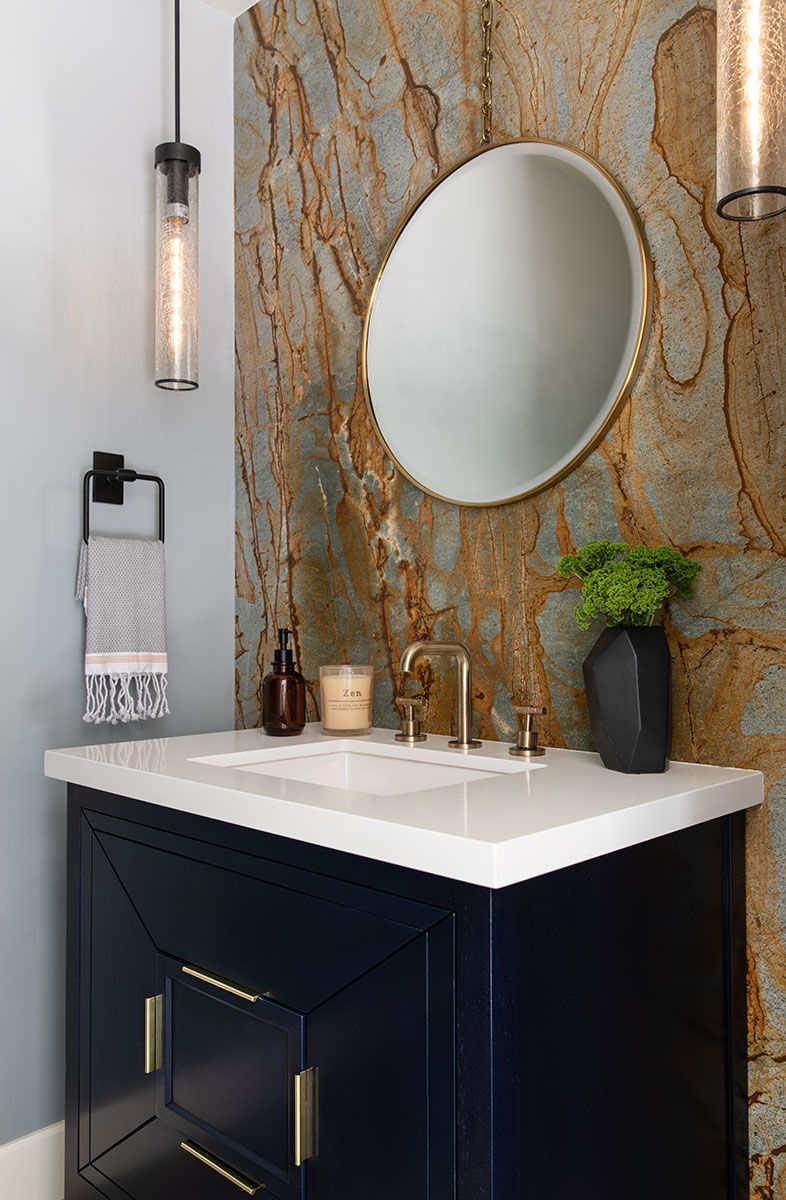 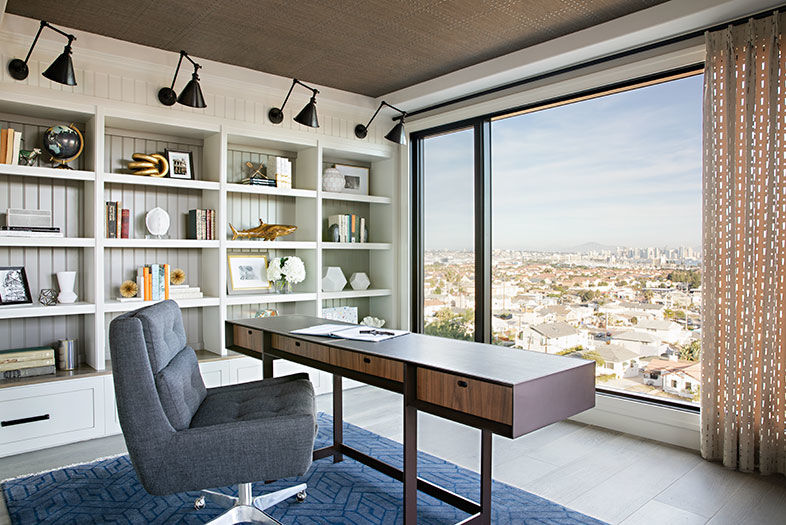 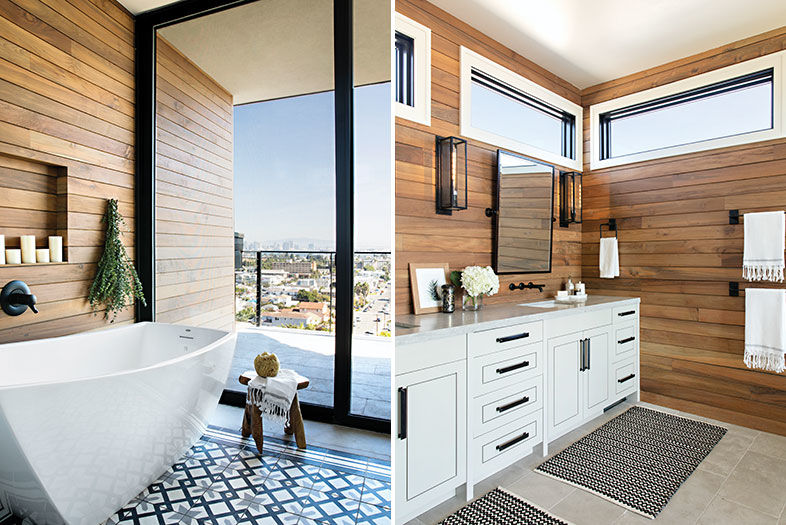 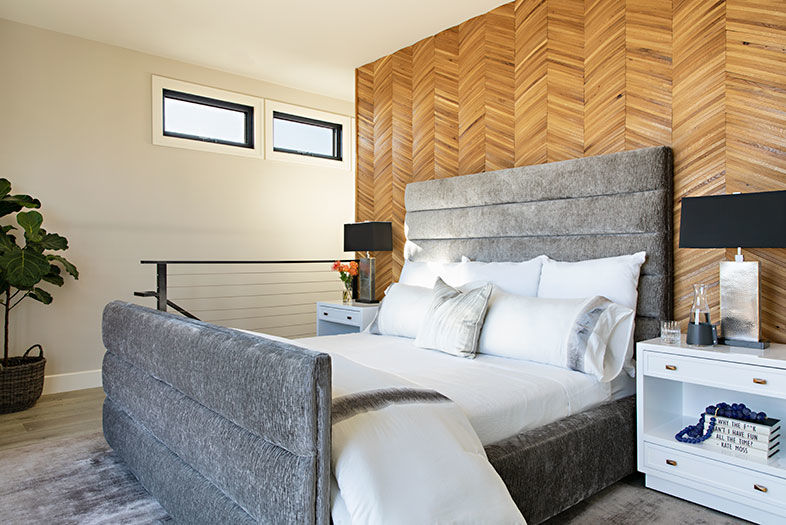 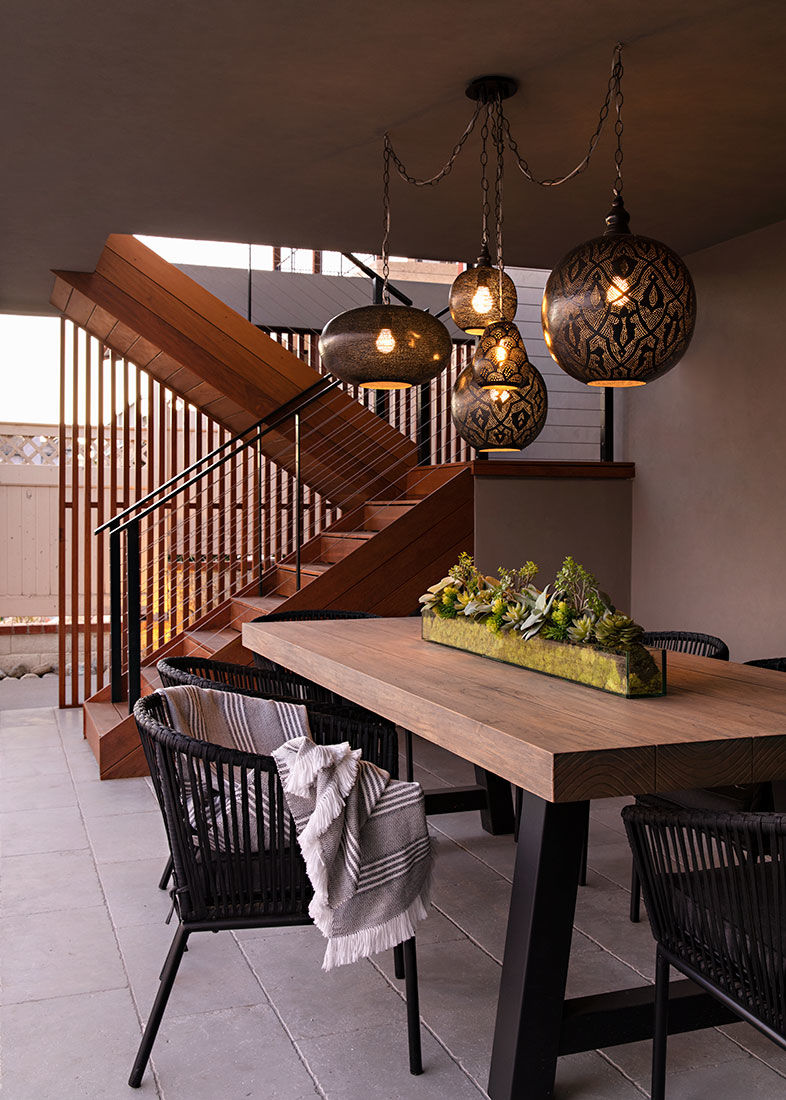 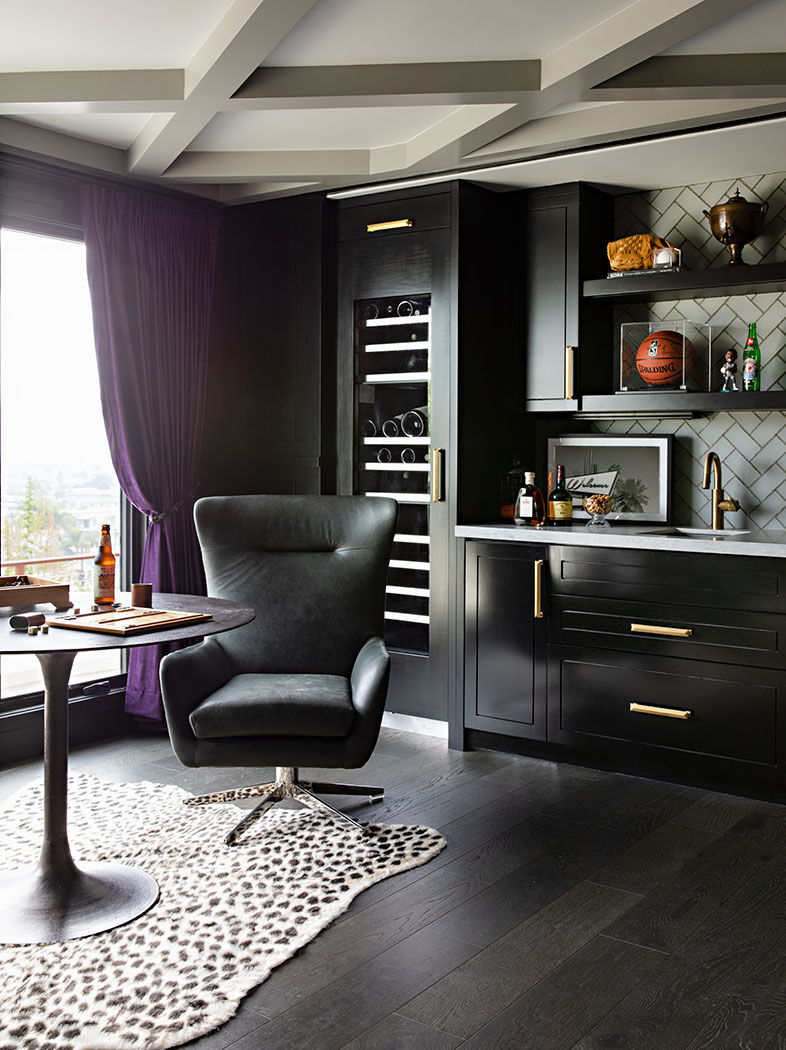 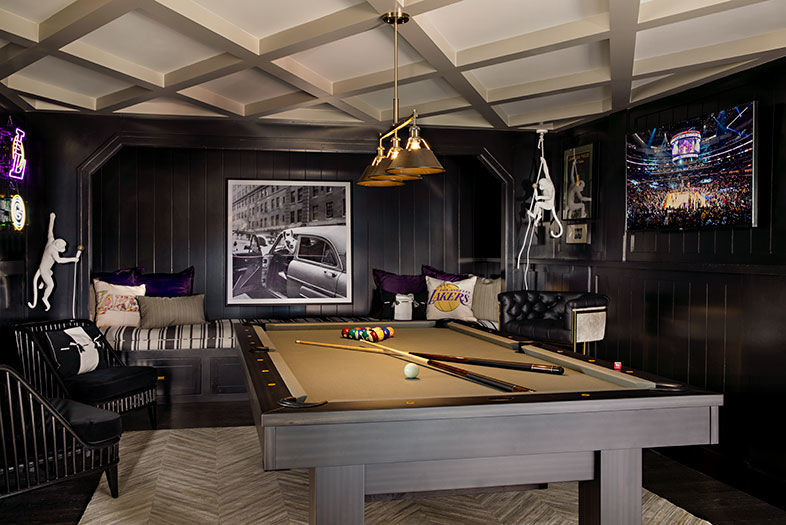 It’s been a whole year since the dust settled from the construction on Patrick Williams’s Point Loma home. But he’s still conversational in first-time-remodeler speak. Ask him about the style of his three-story and, with his hands in the air, he replies simply, "Whatever you see here, I guess."

Then, as though on cue, his interior designer Rhianna Jones chimes in: "It’s casual, modern, coastal. Casual in the sense that they don’t take themselves seriously."

The "they" is Williams, with his dry humor, and his sweeter half, Jen Riddle, both in the medical device industry and part owners of The Lion’s Share and Coin-Op Game Room.

Amid the home’s blue hues and sleek lines (creating that coastal, modern vibe), you can spot elements Jones has sourced specifically to reflect the couple’s cheeky personalities. There’s a monkey in almost every room, hints of orange (Williams’s favorite color), tongue-in-cheek artwork and photos, and a strong first impression in the form of a plum-colored front gate.

The home is almost a complete 180 from what it was when the couple purchased it over two years ago as a means to get their first place together and upsize from Williams’s Kensington house and Riddle’s downtown apartment.

Based on a good ol’ word-of-mouth referral, they hired Will & Fotsch Architects to draw up a plan that would embrace their sweeping views of the San Diego skyline and flip the unfinished basement into a habitable state, upgrading the home to a true three-story.

The referrals kept rolling from there, when they brought on Royal Home Remodels to knock the house down to the studs. Soon after they took a chance on Jones, who’d just launched her own design firm, Tidal Interiors.

"If you’ve ever watched HGTV, it is not that simple," Riddle says. "We’d never done this before and I just thought, ‘Oh, only rich people get interior designers.’ But then Rhianna met us here while we were in the middle of construction, and she knew more than just design. She could work with the contractors. People don’t know that, though. It has so much value."

Jones furnished the home from top to bottom (everything but a king-size mattress is new) and helped the couple whittle down their fixtures and finishes, from a wood accent wall in the master to the encaustic tile backsplash in the kitchen, grasscloth fabric on the office ceiling, and the use of limestone to marry every level.

"Everybody is all ‘open concept this and that,’ but I like having some division," Riddle says, "just to have spaces defined."

Not to mention that the third floor is reserved for the master and requires some structural support. Here are more places where Jones ensured the couple’s casual personality would shine. A decorative stack of books on the nightstand has the quote "Why the f**k can’t I have fun all the time?" on the spines, attributed to Kate Moss. The master bathtub fills with water from a faucet mounted in the ceiling. The bathroom walls are pressurized teak, and today some fresh eucalyptus was hung to elevate the room to feel like a spa.

The bottom level is less serene, more fun and games, because the main draw is a 1,000-square-foot addition adorned in Lakers and Packers decor (Williams’s and Riddle’s teams, respectively).

"This is where Rhianna really came in," Williams says, noting she put a mature spin on how they display their sports memorabilia.

Save for the second floor, the game room is where they spend most of their time. But when the three big-screen TVs aren’t blasting their favorite teams, the couple is on one of their patios, gazing across the pool toward what drew them here in the first place: the San Diego skyline.

"Here, even when the sun goes down, you can see the boats go by, the planes fly in and line up to take off," Williams says. "There’s always something going on, and we love the activity."