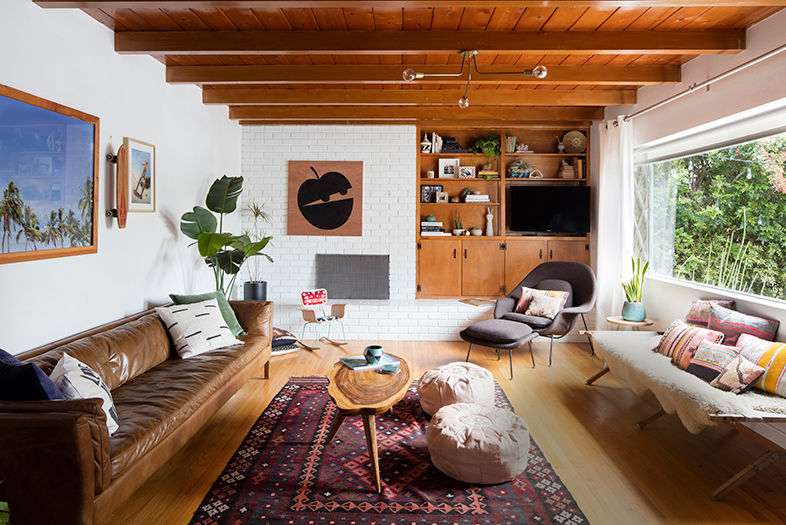 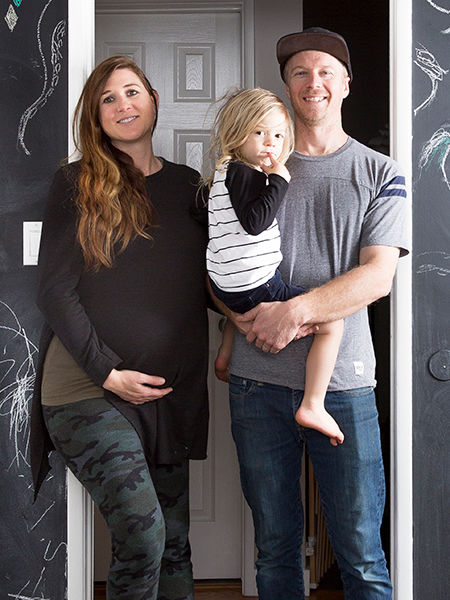 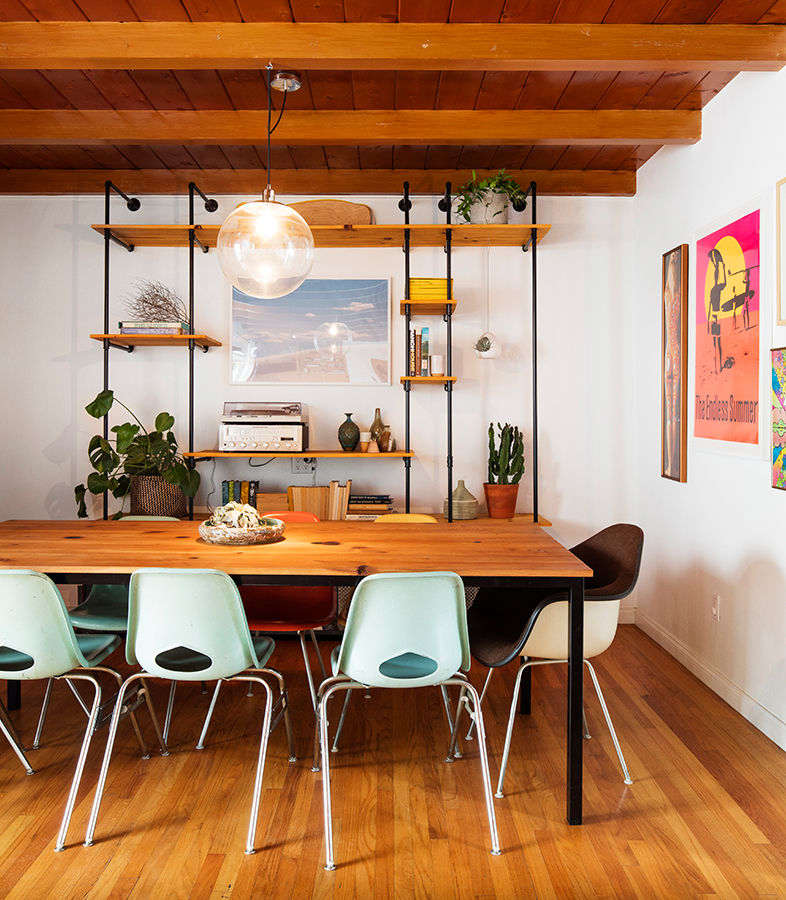 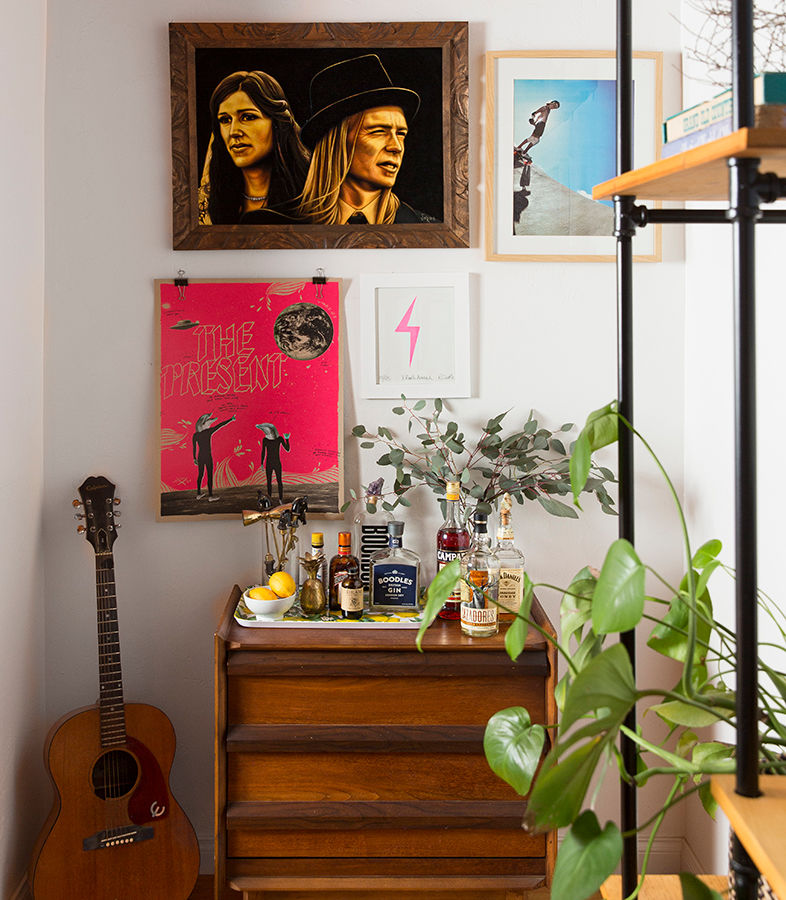 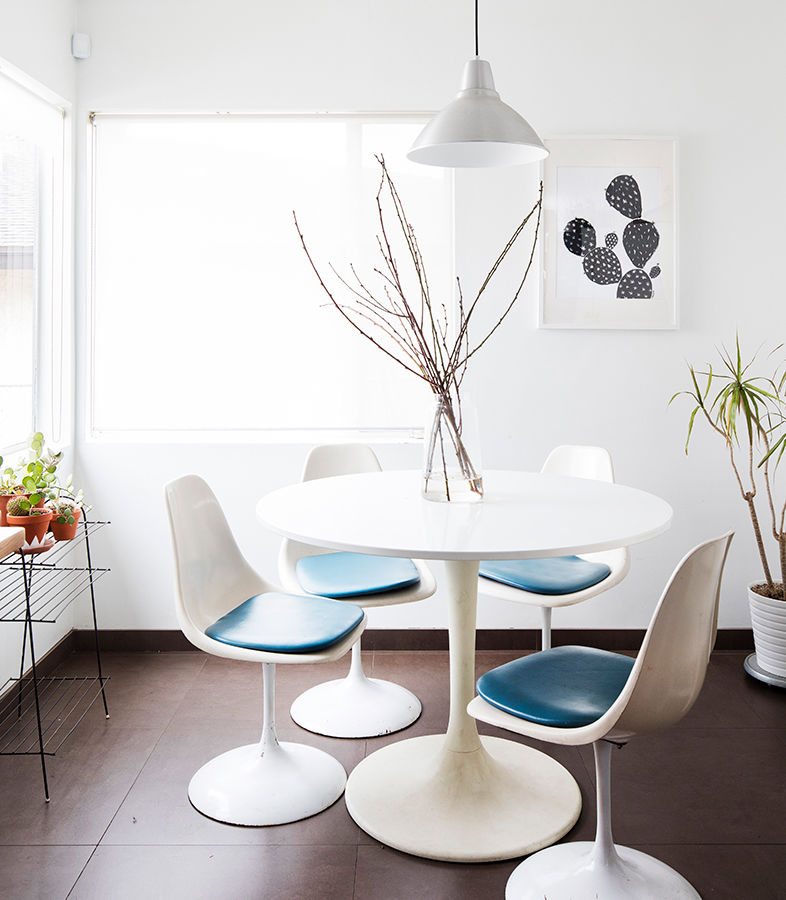 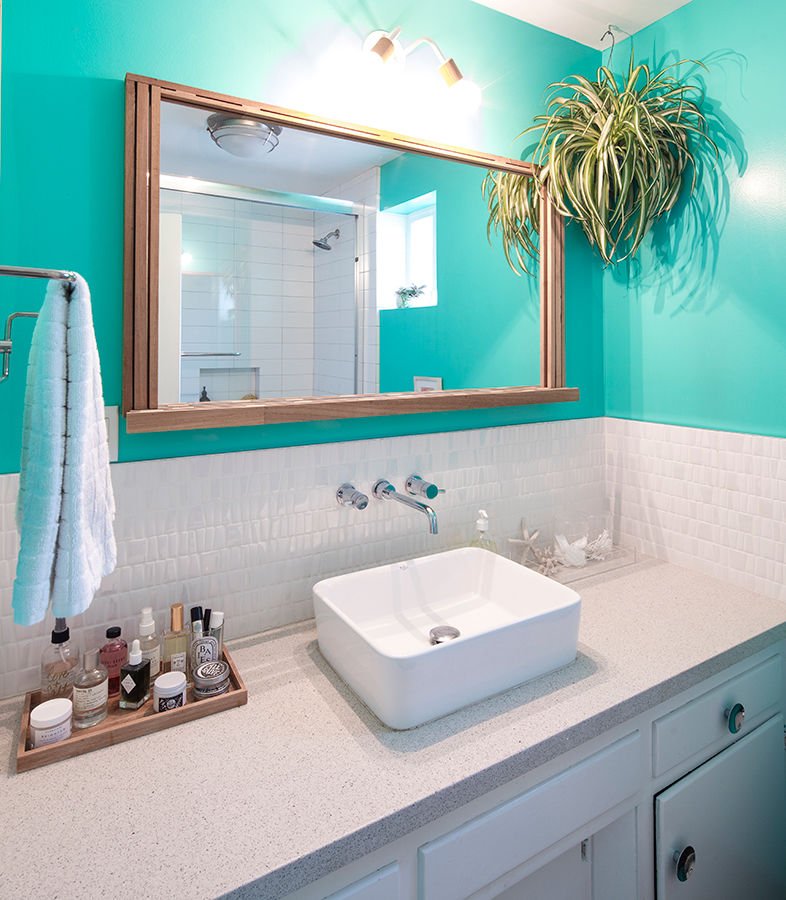 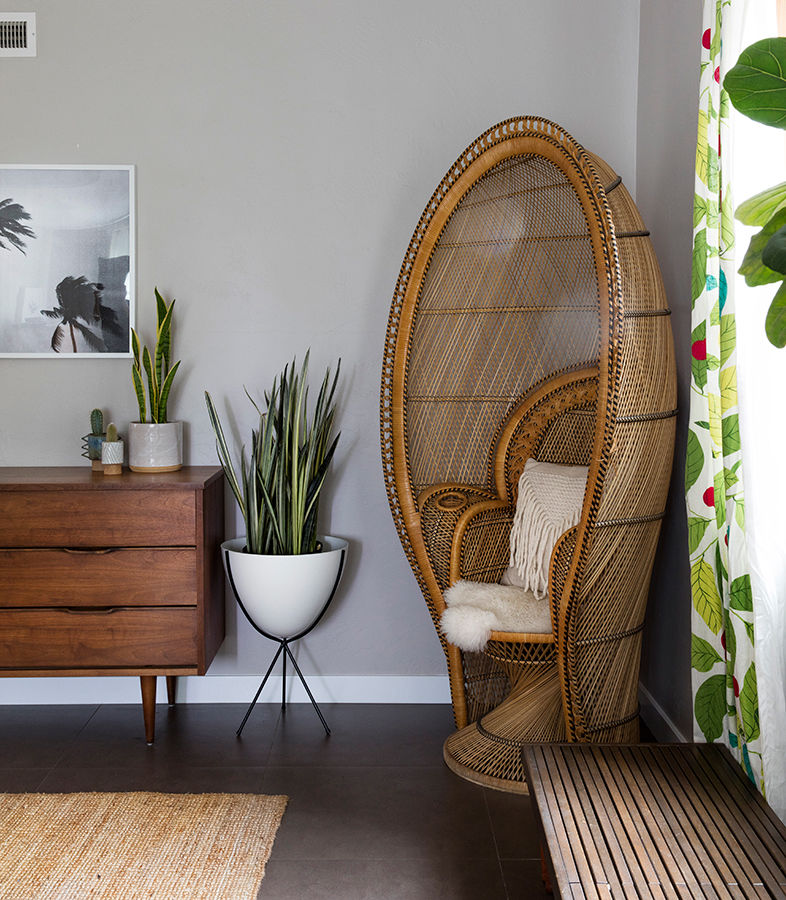 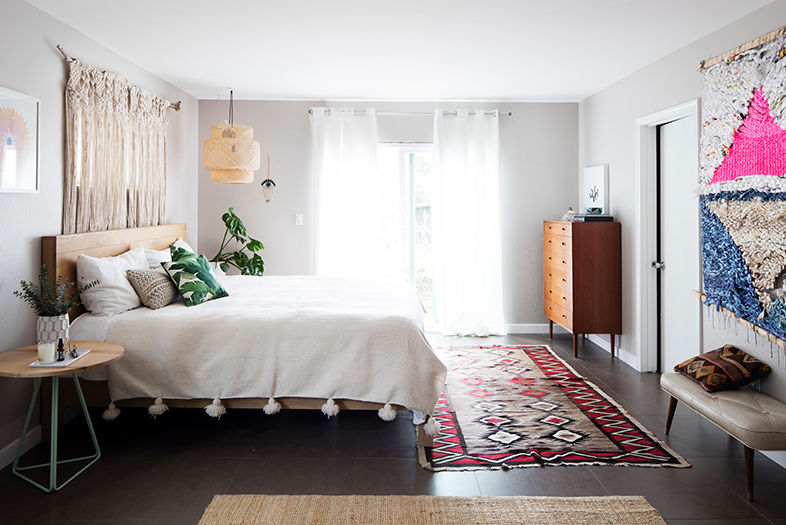 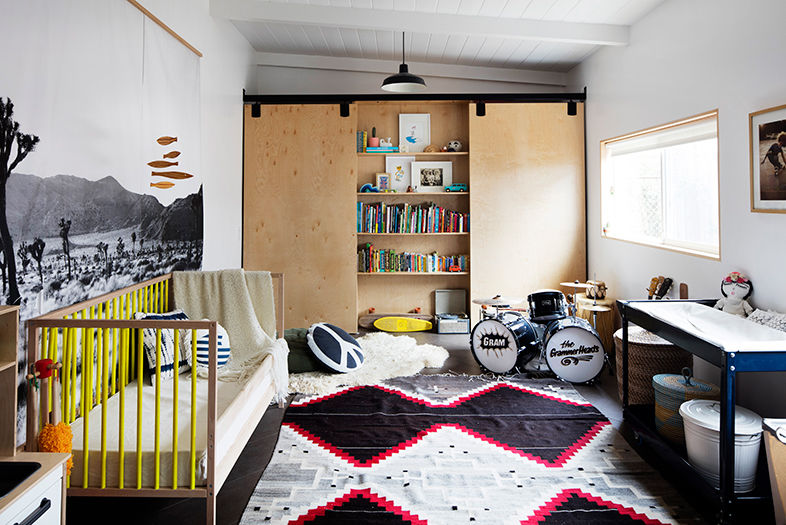 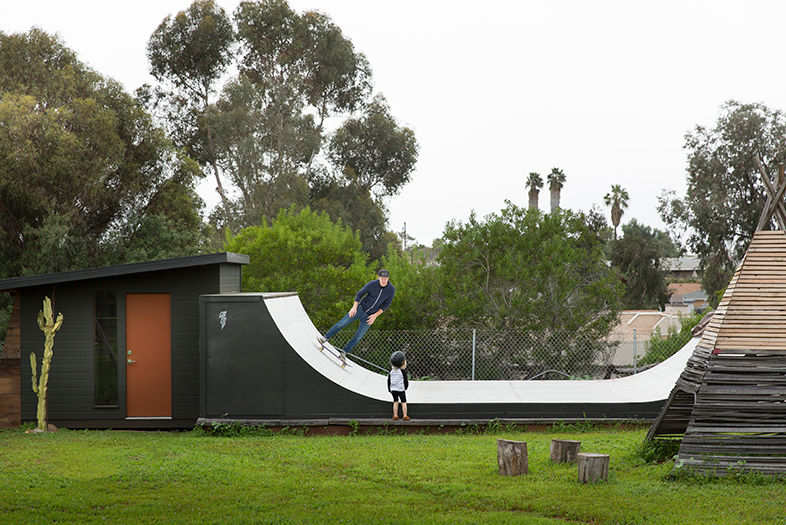 "It’s a little modern, a little bohemian, and a mixture of things from places we’ve traveled," says Julia Wheeler, describing the style of her 1959 cottage ranch house in the College East area. Julia has gained a following thanks to her burgeoning e-commerce site Gunn and Swain, which sells an eclectic assortment of global goods, and through various styling projects at Wayfarer Collective alongside friend and local photographer Taryn Kent.

But nowhere else is Julia’s free-spirited aesthetic more apparent than at the home she shares with her husband, Dusty; son, Gram; and newborn daughter, Elizabeth. At the time of this photo shoot, she was quite literally barefoot and pregnant, about to give birth any second as she chased her toddler from room to room, almost unaware of the camera.

The domicile itself—decked in macramé, sheepskin, and more—exudes an authentic bohemian vibe. Almost everything is vintage, found at local thrift stores and Kobey’s Swap Meet.

"We’ve always been more into the eras of the ’60s and ’70s," Julia explains. "I’d rather have an original piece than a cheaply made replica. The older stuff tends to be made better."

And if something in her house didn’t come vintage, it was probably handmade by Dusty. He is a talent in his own right, at the helm of two businesses, Rael Made wood and metal fabrication and Dusty Wheeler Stone & Tile. Although Julia insists, "It’s so hard when your husband is handy; there are so many projects and never enough time," he has created something in almost every corner of the house. He refinished the kitchen cabinets and laid the tile in several rooms. But then there’s the more artistic stuff, like the custom shelf system in the dining room, and the crates that hold the couple’s vintage record collection. In the backyard alone, Dusty built a midcentury-style shed (it looks like a little ranch house), full-size teepee (the cool-kid version of a standard playhouse), and a skateboard ramp (a gift for Gram’s first birthday).

Prior to breaking out on her own, Julia worked in marketing for TransWorld Skateboarding magazine, which explains the homages to skateboard culture. A vintage skateboard and a photo torn from the book Locals Only hang on the wall above the sofa in the living room.

Many of the home’s most interesting details come from the couple’s art, like the work above the fireplace, which was painted by their friend Nilo Naghdi, who also sketched the octopus on the kitchen’s chalkboard wall. A Tijuana artist created the velvet painting in the dining room, based on one of their wedding photos. Julia commissioned it as a first anniversary gift for Dusty. There are also two large framed photos, taken by Taryn Kent, both mementos from trips the friends took together.

Through Instagram, Julia found Las Vegas macramé artist Veronica Torres-Miller and asked her to make a custom piece that would double as a window treatment in the master bedroom. "I had the hardest time figuring out what to do with that weird little window above our bed," Julia says.

On the opposite wall hangs a colorful weaving that was part of a community art project in Queens, New York.

For the nursery, the Wheelers converted an old sunroom with garage access into a mini hipster’s paradise—complete with a teeny drum set. The room features a 5-foot-tall mural of another Kent photo, taken in Joshua Tree. The couple had the image blown up and printed in three sheets at a neighborhood copy shop. Then they taped them together and suspended the entire mural by a wooden dowel.

The mural was the brainchild of Julia’s friend Summer Meza, a designer at Modernhaus. Elsewhere in the space, Meza opted for a US General mechanic’s cart that serves as a changing table and an Ikea crib that pops thanks to hand-painted neon yellow slats.

But as so many homeowners learn, decorating a house is a marathon, not a sprint. "I still don’t feel like it’s done," Julia sighs. "There’s stuff that would be cool to have. I just haven’t found it yet."