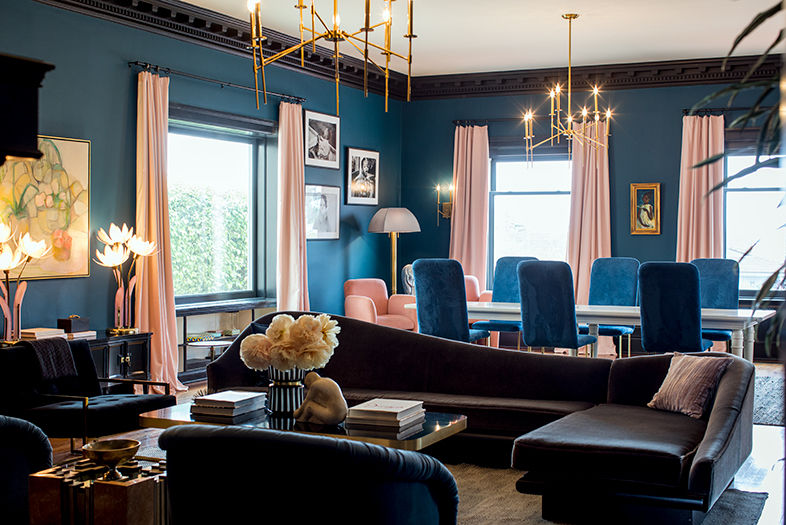 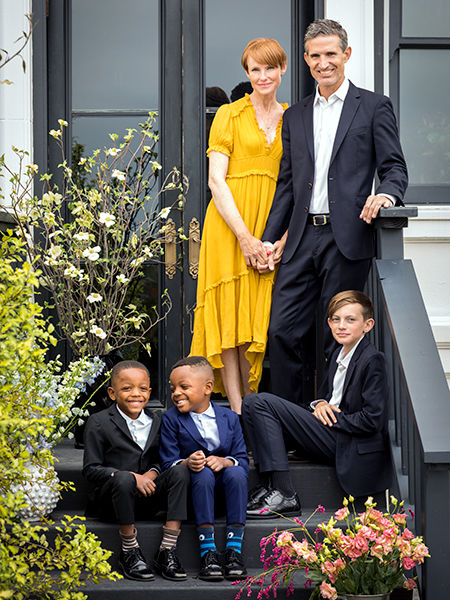 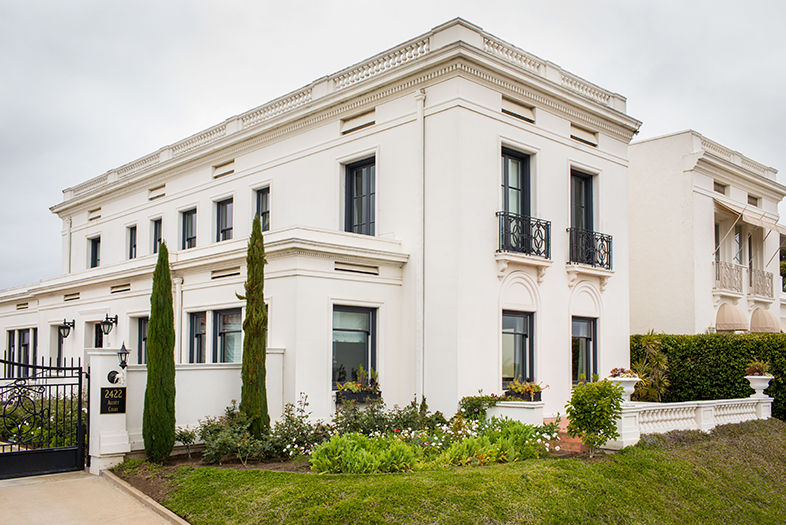 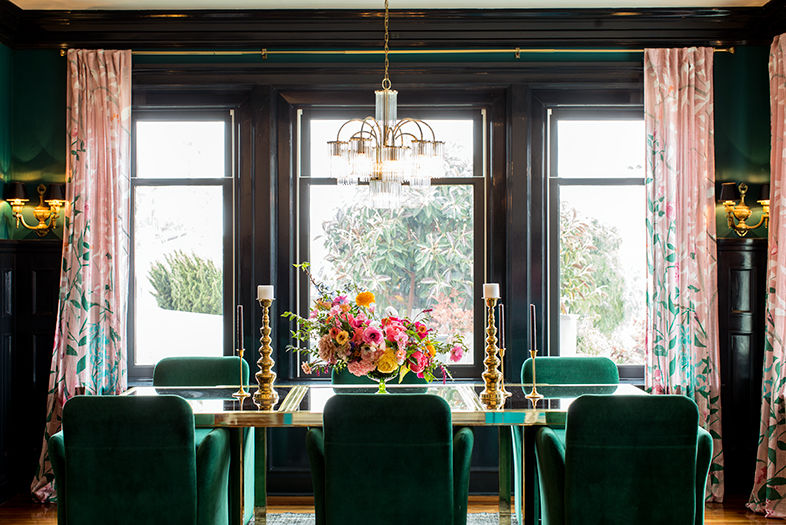 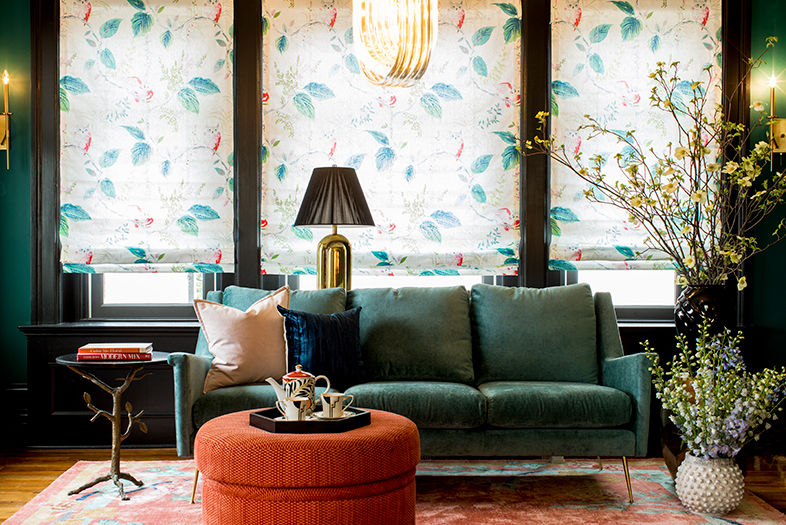 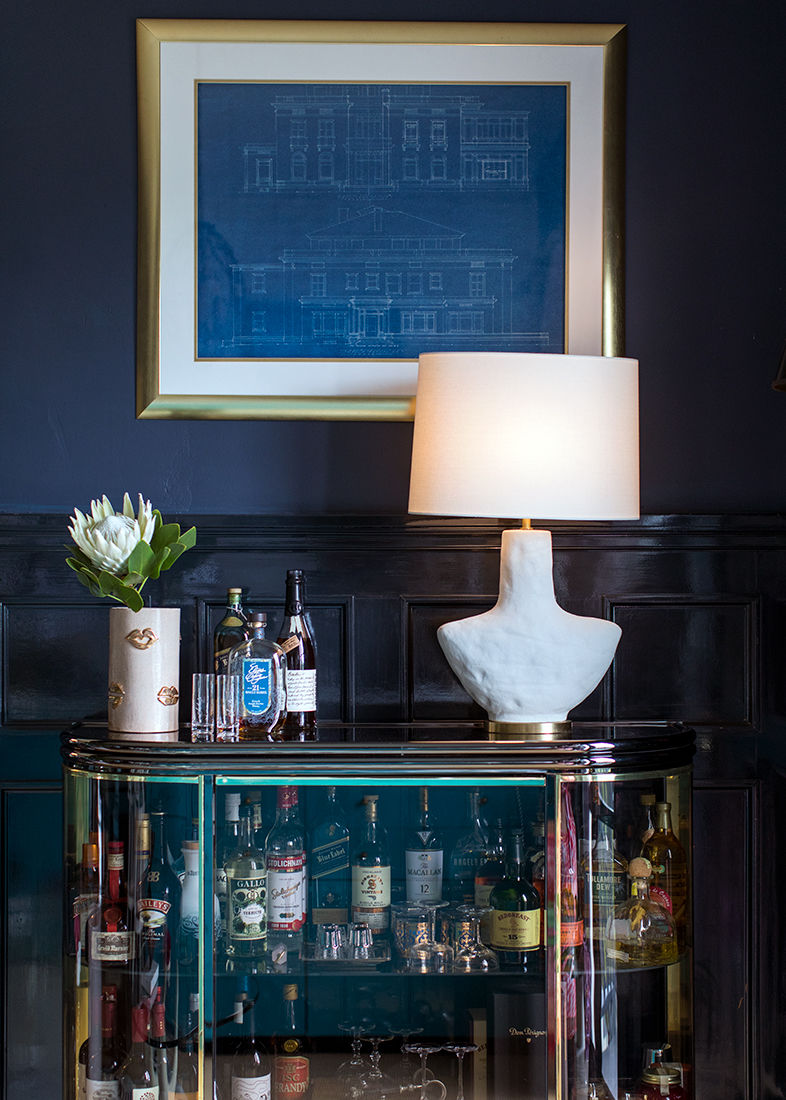 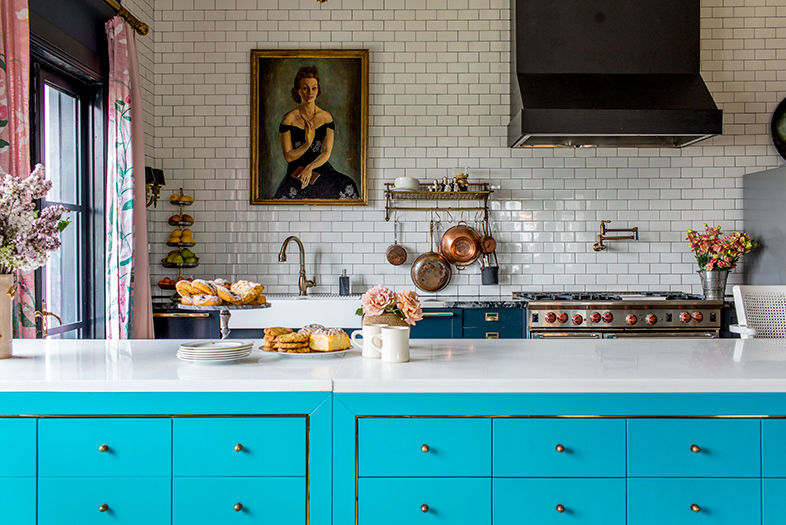 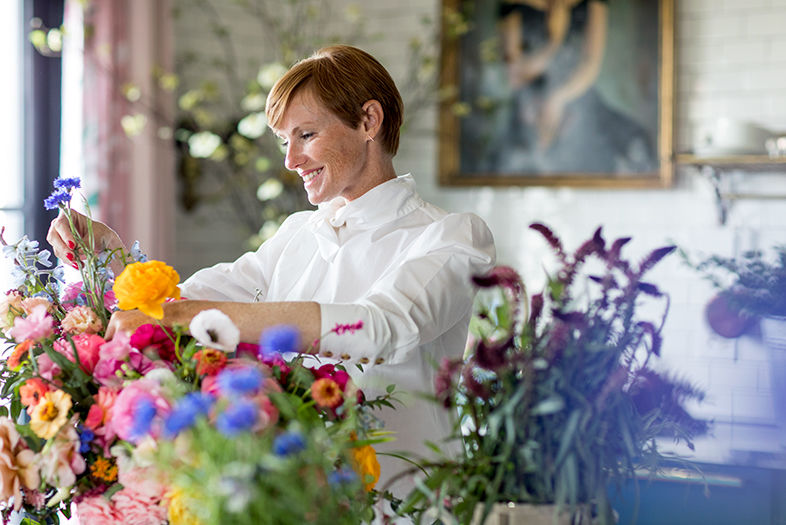 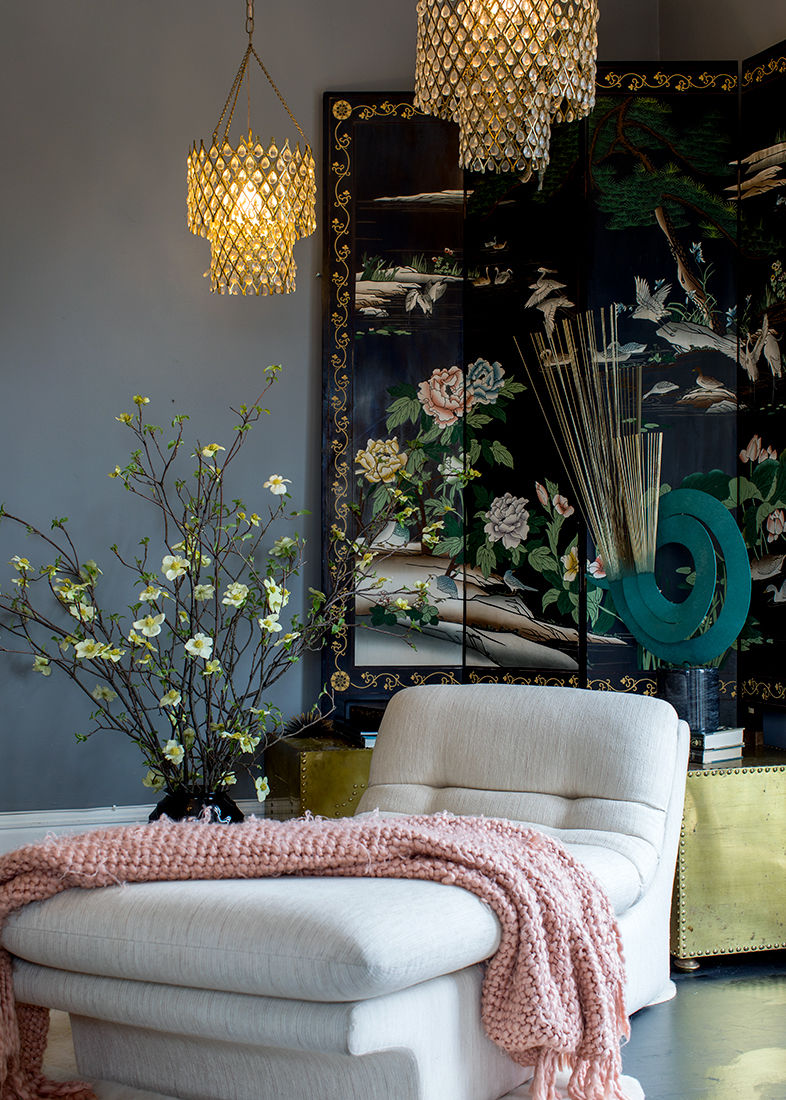 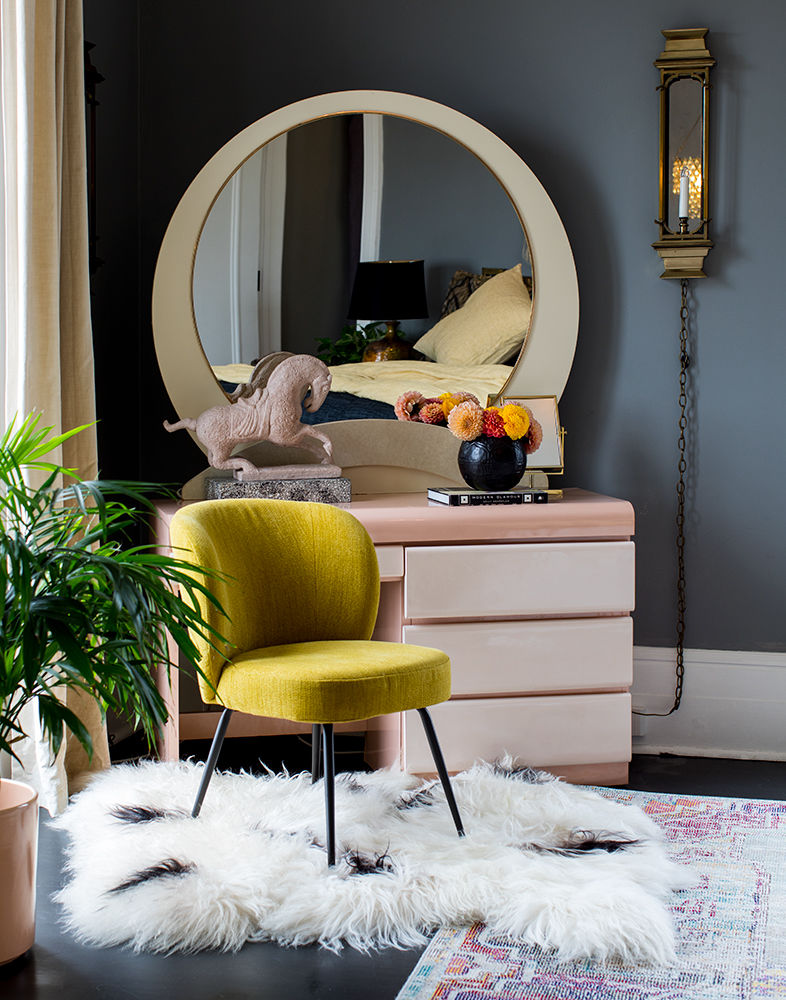 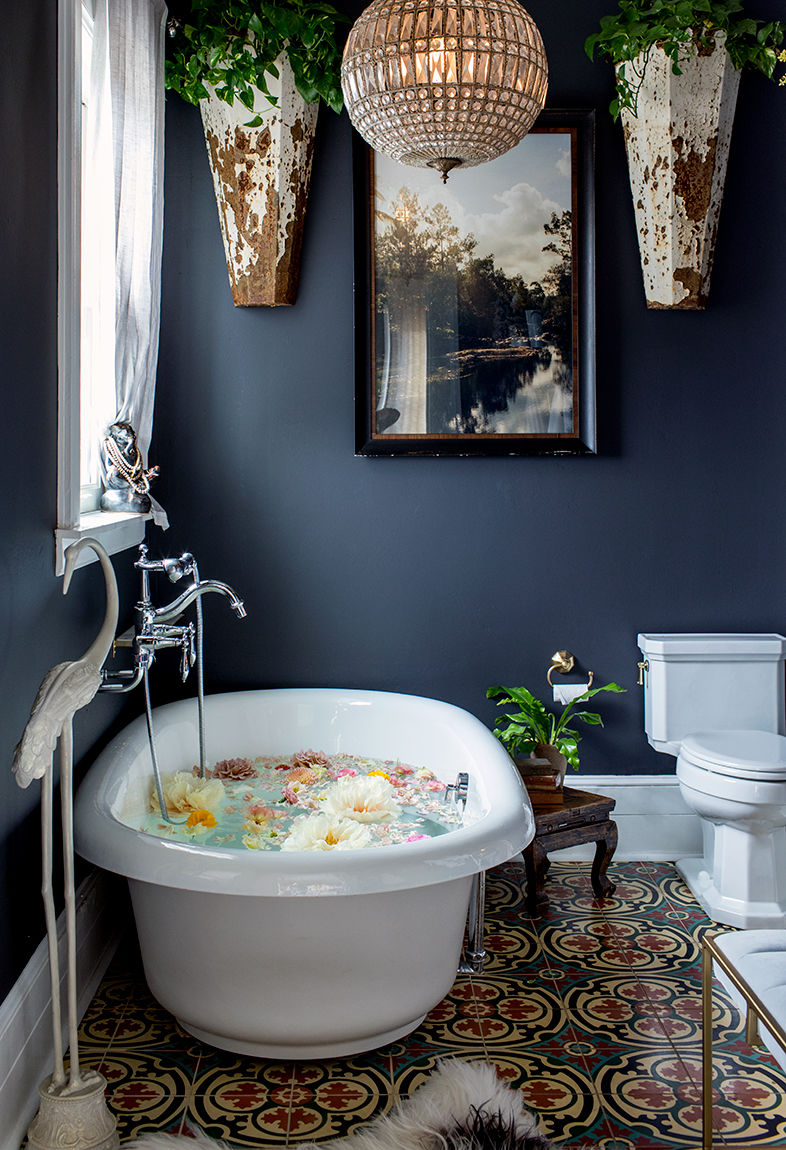 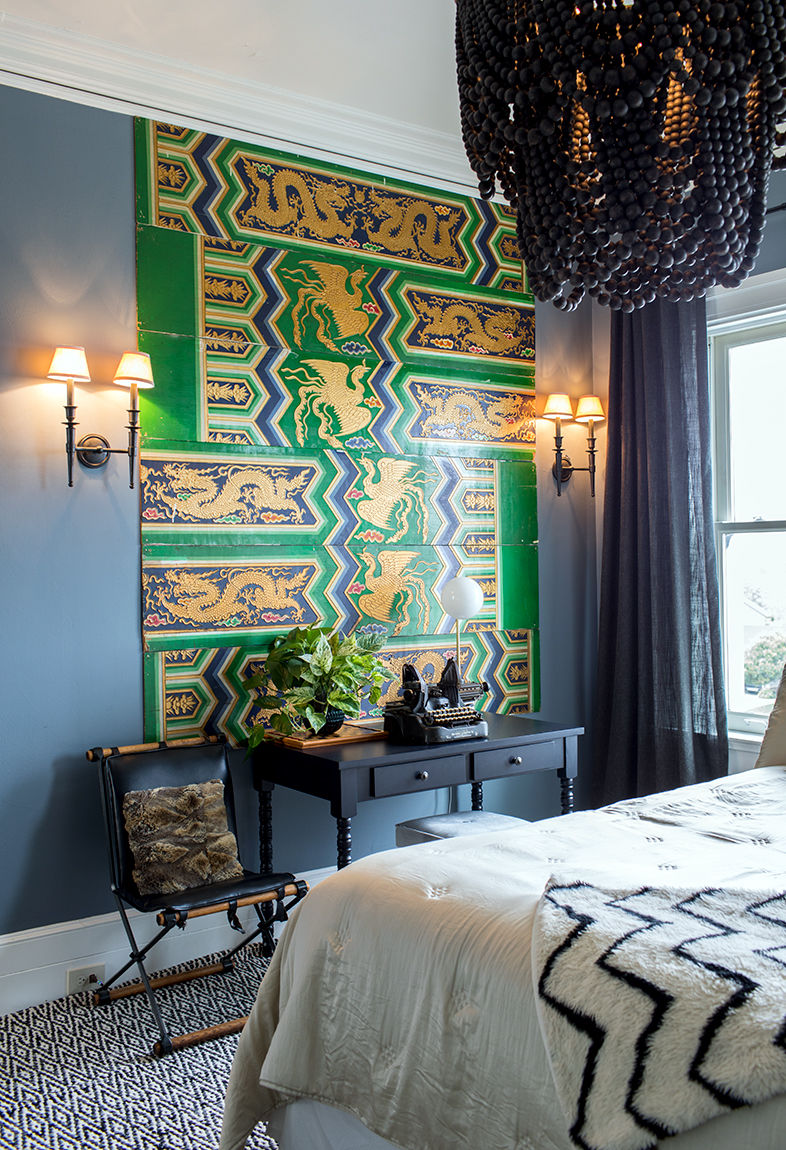 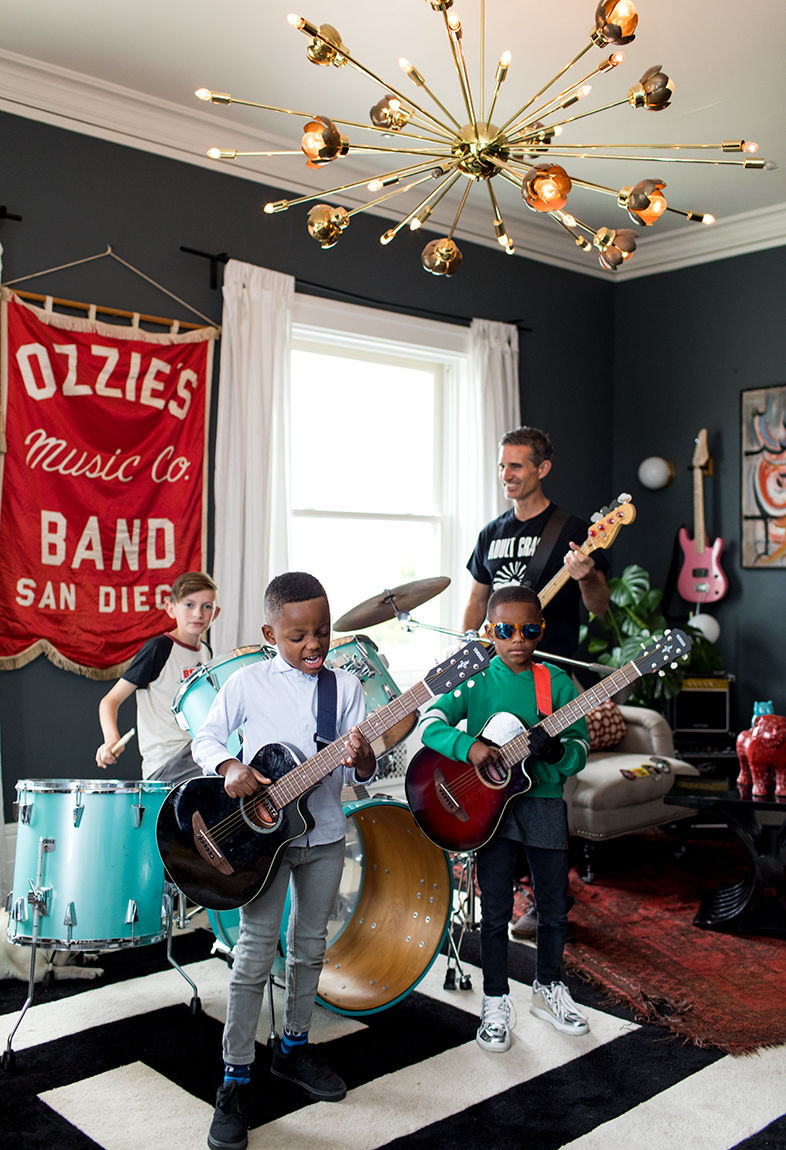 "I don’t know what it is with these airplanes, but those roses love it. These, especially, grow like wildfire," says Bridget McKenna, meandering through the 325 rose bushes on the bounds of her Point Loma property.

The owner of the nonprofit Briddie’s Floret grows most all of her flowers at home, from bulb (or seeds) to bloom. Depending on the time of day, you could find her blaring Beyoncé and tying together bouquets in her kitchen workspace, or hear her three boys and husband serenading her with punk rock from the bedroom above it. The scene, and the home itself, are a century removed from the original estate, though McKenna’s eclectic art deco taste harkens to that era.

Amelia Timken Bridges, daughter of inventor Henry Timken—for whom the Timken Museum is named—built the home with her husband, Appleton Bridges, in 1911.

By World War II, the University of California Division of War Research—tasked with the improvement of US submarine technology—inhabited the space, taking advantage of its ocean and city views. After the war, the estate was subdivided right down the middle, separating the main house from the entertaining quarters and turning the hallway between them into an alley.

Those entertaining quarters, and the guest house that also fell on their side of the property line, went back on the market in 2013, around the time McKenna and her husband, financial planner Michael Fendley, were looking to buy. They were living in 1,500 square feet in Encinitas with their eldest son, Oliver, at the time, and since they were preparing to adopt two more, they needed to expand. But it was more than just the 4,000 square feet that drew them to this estate. "We moved down here because there were families that looked like us," McKenna says. "We’re blessed we found this."

Renting out the guesthouse also put them at a comfortable price point. Today, half of it is an apartment and the other half an artist’s studio.

The main house still had significant work to do, like installing all-new plumbing and electric. "It was a wreck, like 50 years of deferred maintenance," Fendley recalls. "It looked like it could be a disaster. Luckily, it had good bones."

McKenna saw a canvas: She painted every wall herself. "It was a mess, but that was exactly what I wanted. I didn’t want anything touched. It was exactly as it was in the ’40s when they split it."

For a more open layout, they demolished a wall that divided the dining room and kitchen. Today, a teal island from Consignment Classics stands in its place, doubling as the bar where McKenna designs her flower arrangements.

The family congregates for TV time and games in the main room, or "playpen," which McKenna has just about finished perfecting to her liking. "The whole house has taken five years. I’m finally done," she says, with a grin that means quite the opposite. "Okay, I’ll always be tweaking."

She’s a thrifting aficionado, having plucked almost every item here from consignment shops, flea markets, or bargain bins. "I keep changing things until it feels good to me."

In the main room, matching gold light fixtures hang above a swanky couch from Restoration Hardware Outlet and a 12-foot-long table surrounded by six navy chairs.

A nook on one side serves as McKenna’s office, as chic as can be, where she takes client meetings on an emerald sofa from West Elm.

Upstairs, the master bedroom croons in pink hues, with one corner reserved for a chaise lounge and two teardrop chandeliers, and another for a vintage vanity from The Salvation Army. The master bath is a picture of total serenity, adorned with Barcelonan cement, a pedestal tub, and massive planters overflowing with pothos.

Past Oliver’s room, down the hall, is where the music happens. The twins’ bunkbeds are the only indication that their room is for sleeping. Toys are piled high onto bookshelves, and another twin bed for sleepovers angles toward the instruments. Oliver’s spot is behind the drum kit, while Frankie and Jojo play guitar (they’re learning). Their father’s on bass, which he’s played since fourth grade.

It’s during those jam sessions when you can find McKenna tapping into her own creative outlet, among her rose bushes. Today she has a shipment of 100 more scheduled for delivery from breeder David Austin.

Why roses? They were her dad’s favorite flower.

"He was terrible with kids, but great with roses," says McKenna, one of 12 siblings. "I grew up in Chula Vista, pretty poor. We didn’t have anything beautiful in my home. Everything was utilitarian, except for roses on the table that my dad always cut." The day after he died, she started her first rose garden, purchasing a dozen bushes to represent each of his kids. They grew like wildflowers. Every year since, it’s been a tradition to get a dozen more.

"Now I get why he was outside watering the roses. It’s so relaxing. That’s where my love for roses comes from."

How Briddie’s Floret Grew into a Nonprofit