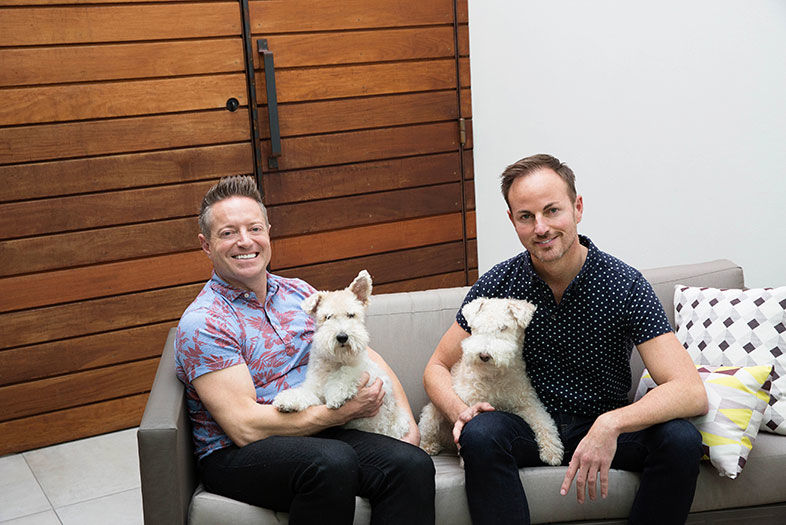 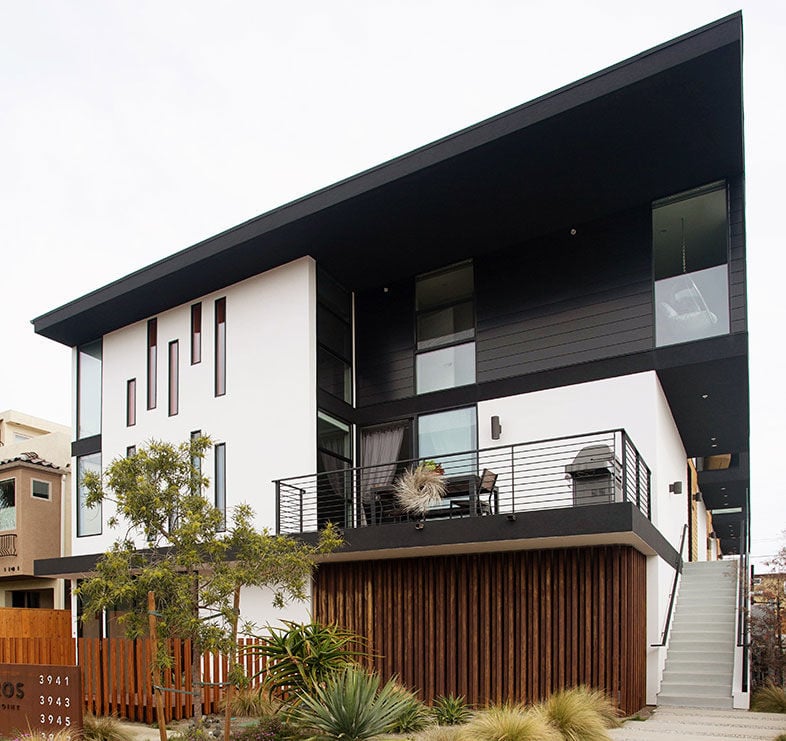 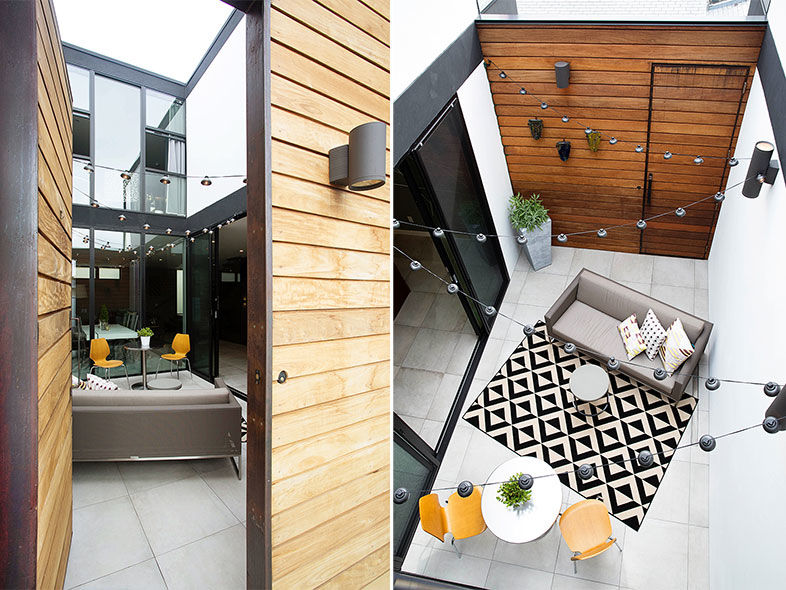 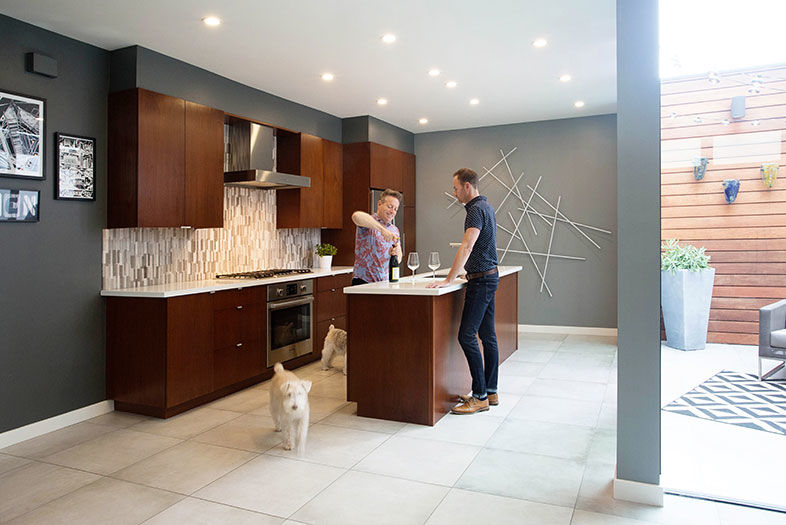 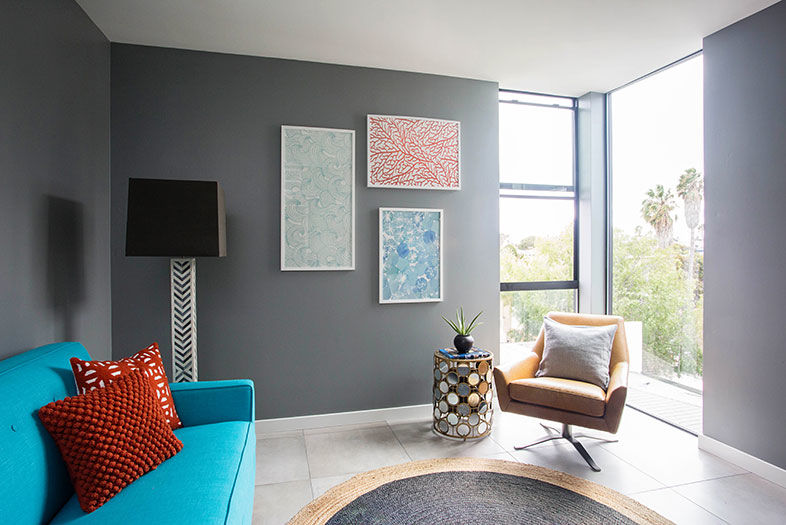 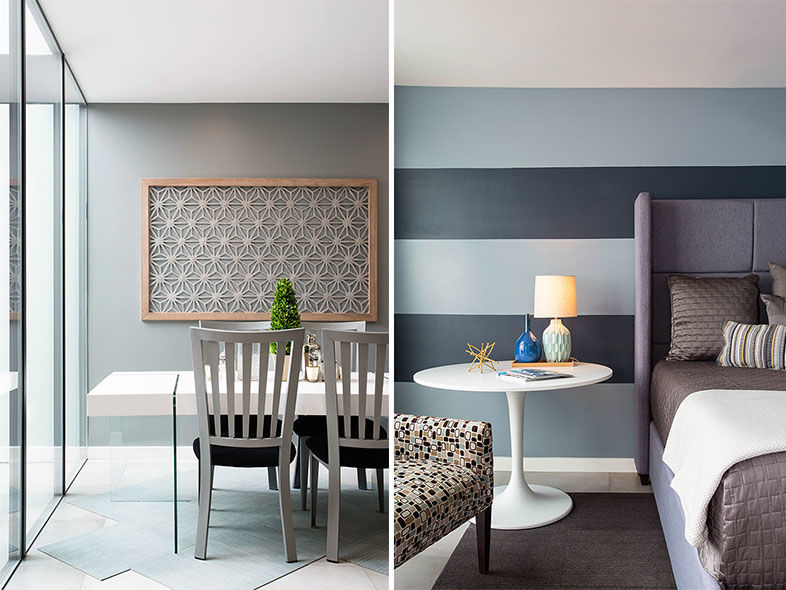 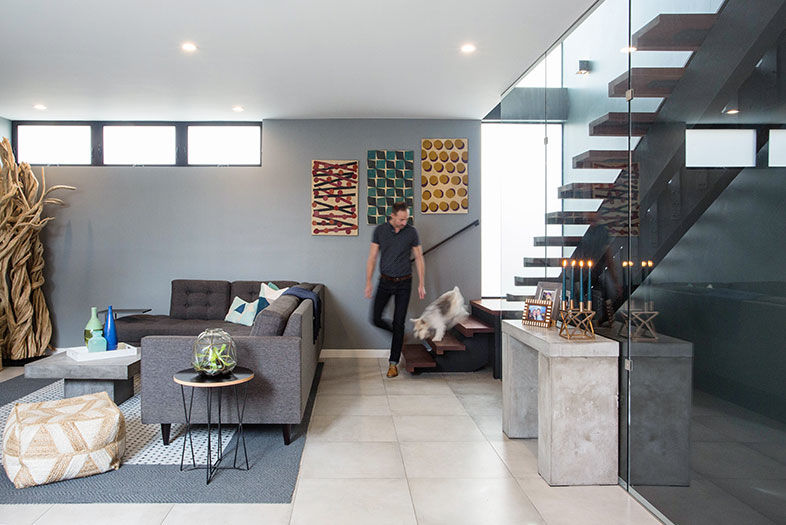 Stats
1,500 square feet with 2 bedrooms and 2 baths, a courtyard, and double-car garage below the unit

Rob Snider and Brent Simmons had a short list of criteria when they moved to San Diego last year: warm weather, by the beach, and modern. The couple gladly left behind the snowy winters of Kansas City, Missouri (buh-bye!), but had reluctantly bid adieu to the modern row house where they’d lived for five years. They hoped to find something similar here, and in one of those it-must-be-fate instances, the couple stumbled upon the LouisV building in North Park. Designed by Soheil Nakhshab of Nakhshab Development & Design, known for his minimalist clean lines and midcentury modern aesthetics, LouisV was a design lover’s dream, with just one problem: It was too far from the beach for the boys from Kansas City. But wait—NDD had also recently designed a sister building in Pacific Beach. Rob and Brent were sold.

Brent says, "It was not only what we were looking for, but the perfect location." All four units in the Petros building feature courtyards that serve as entryways. Other design signatures include: a floating staircase with custom steel railings, large floor-to-ceiling windows, and a seamless indooor/outdoor flow. Since settling into their new home, which they share with their two dogs, Aspen and Fletcher, the couple has embraced the coastal lifestyle. Both bought bikes, and frequently pedal to Sail Bay and the beach and back. "We love it!" Brent says. "I haven’t been on a bike since middle school. It’s the best stress reliever ever." Welcome to SoCal!

When in SoCal, take it outside. One of the unit’s unique elements is its courtyard entry. West Elm market lights make it a charming spot to lounge or entertain, while the porcelain tile flooring transitions from outside to the indoor kitchen and great room. The same tile runs throughout the home—even into the showers—for continuity. Sounds like courtyards are the new foyer! Sofa available at Crate and Barrel, bistro table from CB2

When Brent and Rob discovered the building, it was a mostly blank canvas. "We had the opportunity to come into a brand new property and still make it our own," Rob remembers. They were able to make personal design choices, such as the kitchen backsplash, opting for a gray and white vertical design. The couple loves the open kitchen layout and its luxe Bosch appliances. When it comes to decorating, both Rob and Brent take an equal role. "I’ll move something and he’ll move it back," Rob says. "It’s almost like a fun war."

Rob and Brent used peel-and-stick carpet tiles by Flor in the dining room, master suite, and living area. "We love Flor," Brent says. "It just makes sense." In the dining room, the tiles are arranged stylishly beneath a modern table, one of the few pieces of furniture to make the move from Kansas City.

Upstairs, the spare bedroom doubles as an office and boasts views of the mountains and downtown. The couple took advantage of West Elm’s in-home design services to help tie the spaces together. Here, a series of colorful prints and a sleek cognac-hued leather chair (both from West Elm) serve as stylish accents to a turquoise sleeper sofa by Urban Fusion Decor in Hillcrest, which is also where they bought the gray sectional in the living room.

The design elements merge in the great room, defined by its stunning glass walls and pools of natural light. The floating staircase showcases the designer’s midcentury modern roots. "My architectural designs have been dubbed as ‘new-wave modern midcentury,’ since I try to bring to life the ideals practiced by the modernists with a fresh take suited for today’s tastes," explains Soheil Nakhshab. Another detail to note is the "truly artistic work" by Jason Spakes that went into the custom steel handrails, which continue down the stairs to the two-car garage below the unit. The garage is inarguably another perk, because, really, who wants to deal with street parking in P.B.?