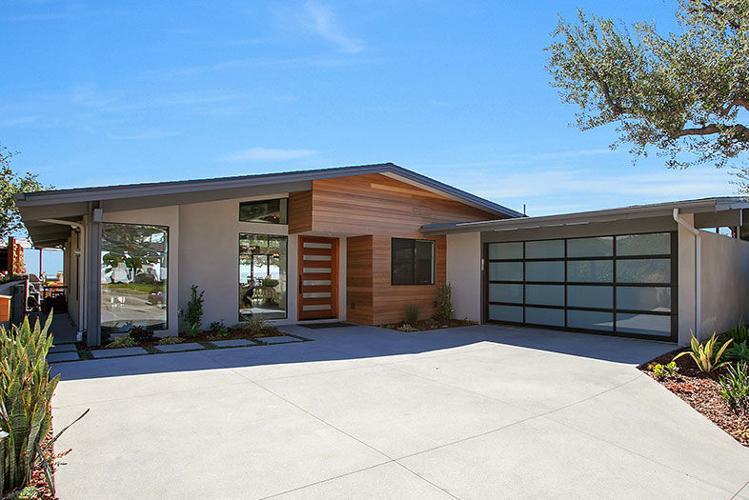 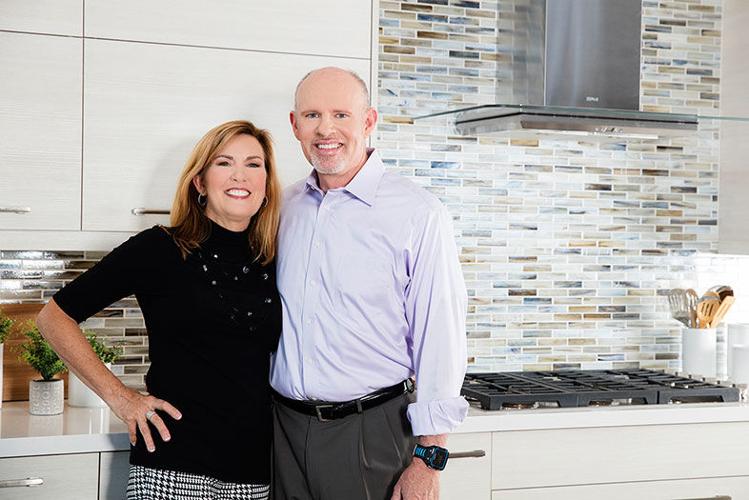 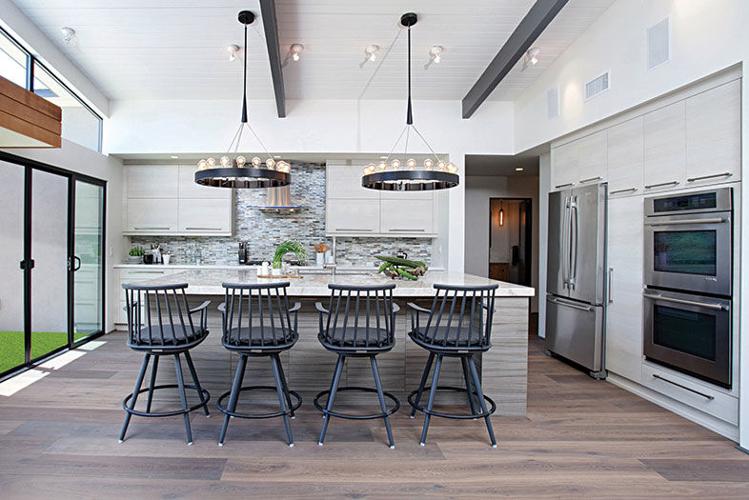 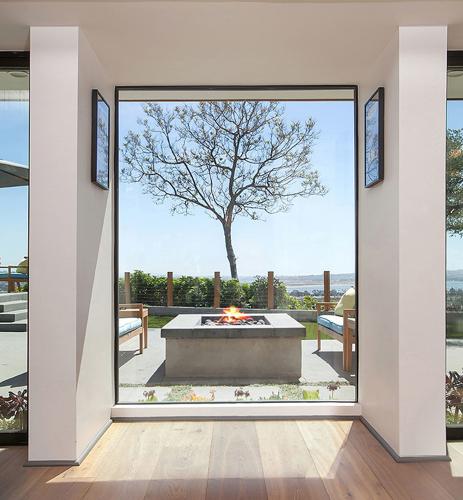 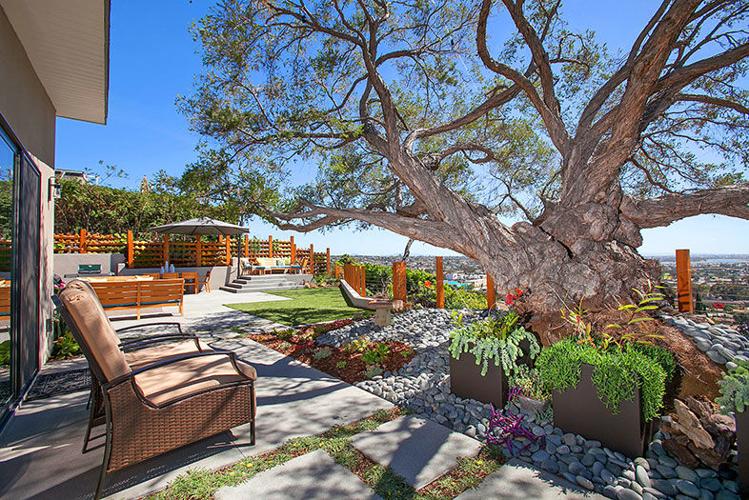 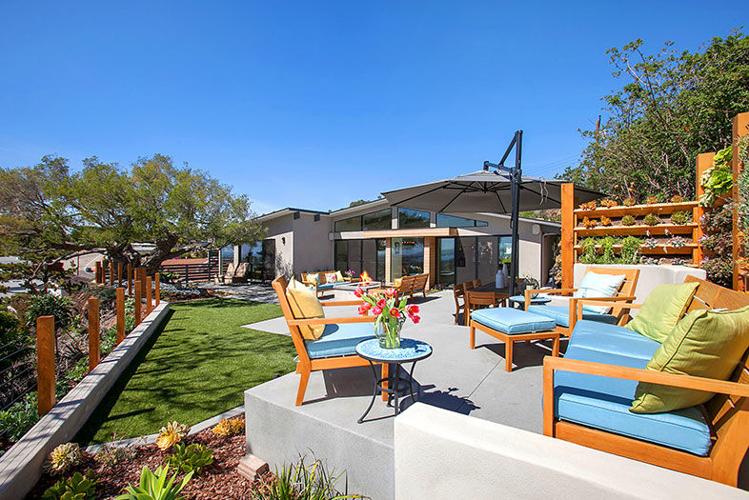 What this unassuming house on Mount Soledad lacks in size, it makes up for in thoughtful design. Prior to a complete renovation, it took a visionary to see the good bones underneath a 1970s remodel that, as the new owners put it, "obliterated" the original midcentury modern architecture. "We bought it for its potential," Judy Dolan Pruett says. But she and her husband knew a project of this scale would require next-level expertise. "If we were going to be tearing the house apart and opening spaces, we figured we would run into some gotchas," Steve Pruett adds.

They hired Jackson Design and Remodeling to help them take the house down to the studs. "The most important aspect of this project was to take advantage of the location’s incredible views and keep the midcentury modern soul of the home," interior designer Sol Quintana Wagoner says. The team opted for modern materials, like quartzite countertops and cabinets with hydraulic lifts, but always kept the big picture in mind. "From the direction of the flooring, to the grain on the cabinets, to the long horizontal cabinet handles and backsplash tiles, all were designed in a linear direction to deliberately lead the eye to the view outside."

For the exterior, they kept the roofline and location of the front door, but removed a defunct fireplace and added more glass and cedar siding. The latter is a finish that runs throughout, particularly in the back of the house. "We weren’t looking to make it a 1961 time capsule," Steve explains. "We wanted a look and design that would hold up over time. We wanted this to be a home that we could own for the next 20 to 30 years."

Judy and Steve Pruett recently moved back to San Diego after living out of state for the last 20 years. Their two sons and new granddaughter are here, too. "It’s been really great to have a place where we can all gather together," says Judy, a San Diego native. The couple hoped to create a space fit for spontaneous entertaining and one that wouldn’t feel crowded. Mission accomplished! They started having parties during the demolition phase, when the backyard was in rubble.

The home’s views of Mission Bay played a major part when selecting the interior color palette, especially the shimmered-glass and abalone kitchen backsplash. Large 10-inch-wide European oak planks line the floor, adding rustic warmth. To make an artistic statement, the designer chose a pair of chandeliers designed by Rico Espinet for Robert Abbey. Sol says, "Usually chandeliers are used at the dining table and pendants over the kitchen island, but I switched them to give the space a destructured feel."

The home’s dramatic floor-to-ceiling windows allow for ample natural light and expansive views. This one sits beneath an eyebrow roof that cantilevers on both sides of the wall, creating continuity from indoors to out and serving as a reminder of the house’s midcentury roots. "It helped separate the kitchen from the dining space and still-framed the rear view," architectural designer John Kavan says. "The biggest surprise was, once the view window was in place, how perfectly on-center a tree in the rear yard lined up with the center of the window. It really helped draw the sight lines out to the view."

Careful consideration went into the backyard design, which features four separate seating areas with different vantage points and functions. Even the concrete, poured by Jason Camilli’s Concrete, was given extra thought. Ever the mother and a retired pediatric nurse, Judy ensured the surface was soft enough to walk on with bare feet and textured enough that her two-year-old granddaughter wouldn’t slip when it was wet. "To me, that’s the beauty of that concrete," she says. "It was an interesting process."

Another safety feature is the cabled fence that sets off the canyon below but doesn’t block the view. Its stainless steel cables are exactly horizontal and meant to disappear. The Pruetts also brought in an arborist to preserve the existing melaleuca tree, and used potted plants rather than flowerbeds that would "choke out the trunk." But the hallmark of the backyard is the living plant wall that stretches along the neighboring property line. The brainchild of Josh Soto of The Landscape Guru, the wall features more than 20 species of succulents, a self-watering irrigation system, and a stylish color-blocked layout by Judy.