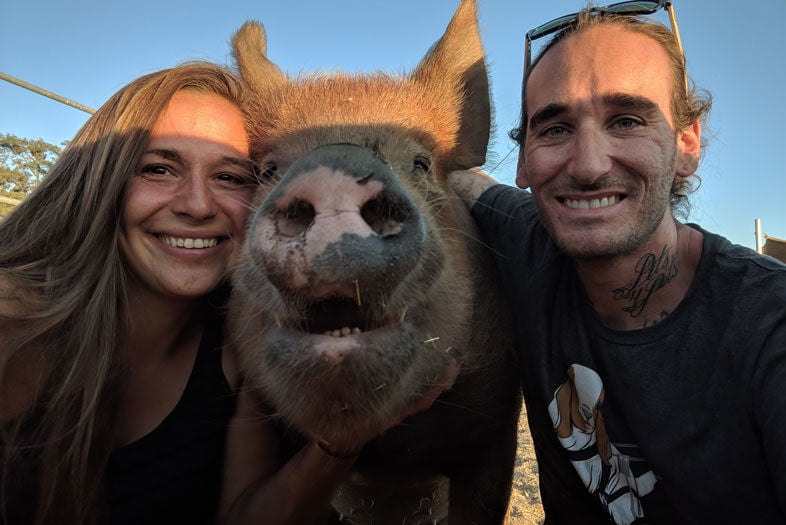 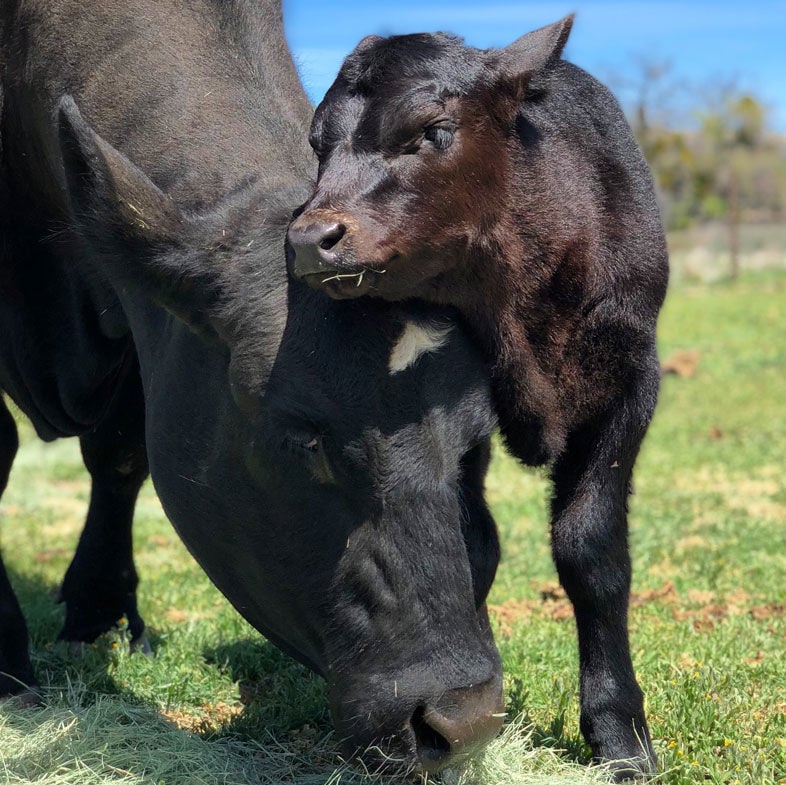 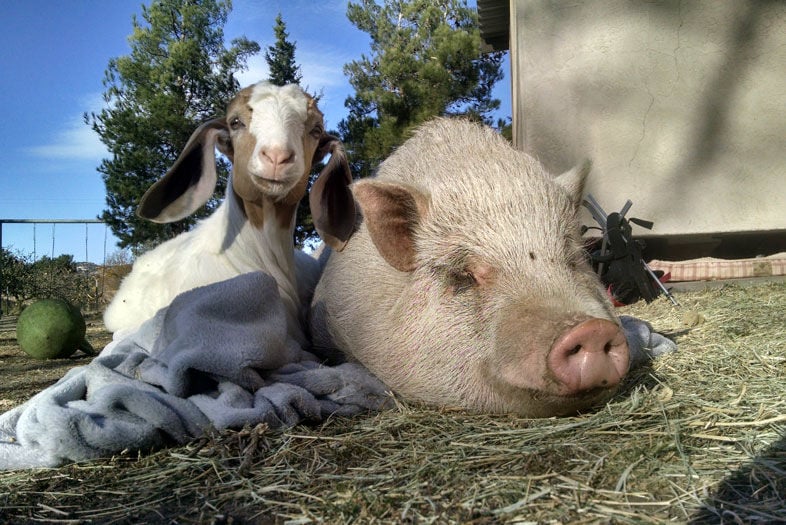 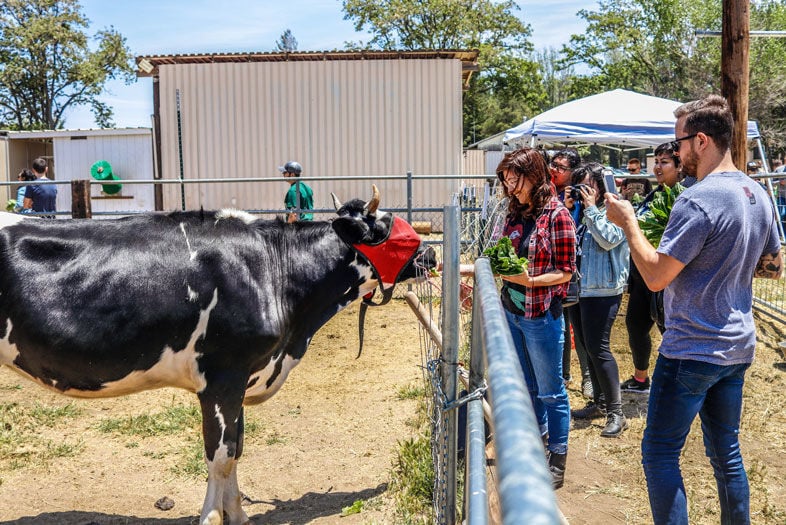 Matt Lieurance and Jordan Russo’s vegan lifestyle and passion for saving animals started in a place known for, of all things, baby back ribs. The East County natives—he from Lakeside, she from Santee—met working as servers at Chili’s in 2008. "We immediately hit it off," says Lieurance, 31. "And we both needed a place to live, so we moved in together a few months later and have lived together for the last 11 years."

While Russo, 32, had been vegetarian for 15 years and vegan for eight, Lieurance was later to adopt. "I worked at Burger King in my teens and ate it every single day, even on my days off, followed by Jack in the Box and taco shops," he says. "It was disgusting. I decided to go vegan for a bit to cleanse, and then I felt really good, which I had thought was a myth." Lieurance, who later worked in sous and executive chef positions at Snooze, had been on his vegan diet for six months when he started to notice other changes beyond the feel-good detox. He’d already been aware of the environmental impact of animal agriculture, but now he started thinking about the animals behind all those meals, too.

The friends’ shared commitment to respecting both animals and Mother Nature led them to open Farm Animal Refuge in August 2016 as a home for abused, neglected, and unwanted farm animals—everyone from cows and goats to potbellied pigs and chickens. The idea sparked after they visited similar places, like The Gentle Barn and Farm Sanctuary, both in LA County. "We could see the power these animals immediately had on people. They put a face to their plate," Lieurance says. "We thought, ‘It would be so much nicer if this was closer. Nobody else is doing it, so we should definitely do this!’"

To bring the refuge to fruition, Russo’s parents contributed money from the sale of their second home—"without her parents, this never would have happened," Lieurance says—and the duo secured an affordable 10 acres in Campo. As for the skills needed to care for livestock... they weren’t necessarily experts. By day, Russo works full-time in insurance and by night, Lieurance is a bartender at The Rabbit Hole in Normal Heights. (Their "two ships passing in the night" system works well, as someone can always be on the farm.) But they sought advice and training from other rescues—and the Internet. "I watch YouTube for hours just to learn a couple of things," Lieurance says. "We’re winging it, for the most part."

But their approach is working. Take Grace, a cow deemed useless by a dairy farm because she had an umbilical hernia and could have complications if impregnated (which is of course intrinsic to milk production). Grace could’ve been slaughtered, but thanks to a local activist, Russo and Lieurance got her to the refuge. "We fixed the hernia just by wrapping her belly every single day for a couple of months with wraps people use for plastic surgeries. I found the method online," Lieurance says. "The vet was like, ‘Can you send me that info in case I see that in the future?’ That’s happened a couple of times."

Then there’s Tucker, an approximately 10-month-old goat who couldn’t stand on his own when he came to the farm. "Luckily we had wheelchairs and splints already, and knowledge in physical therapy. Volunteers just sat and watched him because if he fell, he’d have to be lifted up. We went from him not being able to support himself to him actually being able to walk around in a few months. It’s incredible."

It’s no surprise that Russo and Lieurance have grown attached to their herd. They’ve thrown a baby shower for Mama the cow, and each have pigs sleep in their bedroom. "My most special animal is Diamond, one of the big black pigs," Lieurance says. "They were one of our first animals. They slept in my room so long. As well as Rose [the cow]. I was there when she was born."

Rose and Diamond are among more than 50 other animals at the refuge. Most come from farms where they were injured and considered useless; some come from the San Diego County Fair 4-H program, and some were unwanted pets, like so-called "teacup" or "mini" pigs that still grow to be hundreds of pounds. Russo and Lieurance get multiple calls a week to take in animals, but they’re careful not to exceed capacity. "Our main focus is to only grow as our support allows," he says.

That also means staying frugal to keep the operation afloat. "We live on-property; we’ve absorbed a lot of the costs. We pay SDG&E, we pay the water. We do most of the work ourselves." Working in central San Diego means they both drive more than two hours round-trip to their full-time gigs. "I was never into podcasts until moving out here!"

For extra funds, the refuge looks to donations. They recently raised money to expand their cow pasture, which has enabled a larger shaded space for the cows as well as more room for sheep and goats. Their next task is to build more chicken coops. (They currently have two, both of which have toy musical instruments for the chickens to peck at. "They’re very curious. We’re trying to enrich their lives.")

"The monthly donation subscription is huge for us," Lieurance says. "We can be comfortable making decisions because we know how much is coming." They also have an Amazon Wish List filled with requests for feed pans and generators.

To provide hands-on help, people can volunteer, taking animals for walks, scooping poop, and assisting with therapy (working with the animals requires a twice-per-month commitment). Russo and Lieurance also encourage people to visit the farm during one of their events, whether it’s yoga or their free open house, when visitors can meet and feed treats to pigs like Thor and Jerome, India the cow, and Sherman the goat. There’s food, music, kid-friendly activities, and a hayride. "Our goal is to get as many people from all backgrounds to meet these guys," Lieurance says. "We don’t have to be the preachy vegans. We can let the animals do all the work. They’re the most powerful tool."

For more info on volunteering, farm tours, and how to donate, go to farmanimalrefuge.org

Visit, volunteer, and donate to these three other regional farms

Located in Elfin Forest, this nonprofit run by an environmental lawyer takes in neglected or injured horses, pigs, and chickens. You can volunteer, tour the farm for free every first Saturday of the month, or stay at their on-site Airbnb, which helps raise funds for the project.

Head to this rescue in Ranchita (near Warner Springs) to meet goats, chickens, ducks, and pigs rescued from abuse and abandonment. On Thursdays, for $3 you can meet the animals, with every dollar going to their food, medical care, and more.

A former nurse and her husband launched this space in Temecula as a refuge for horses, but have since expanded it to care for goats, dogs, donkeys, cows, and pigs. They hold tours about once a month, with a suggested donation of $20 per adult and $10 per child, as well as goat yoga and a plant-based Thanksgiving dinner every year.