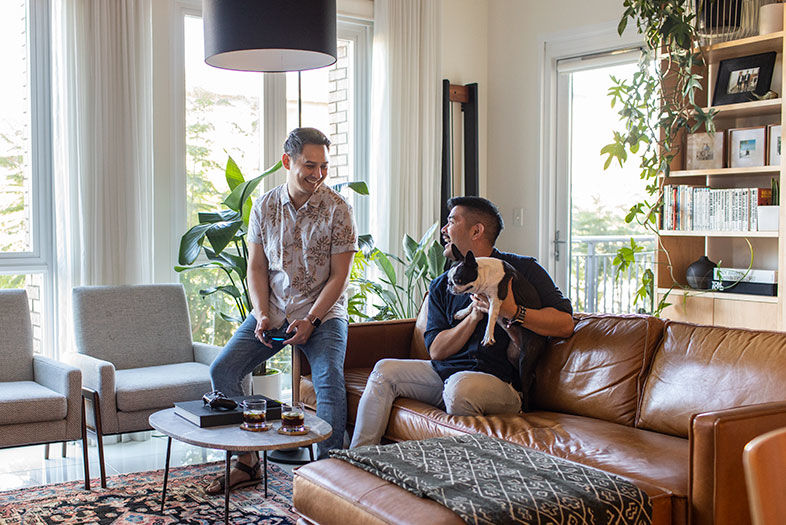 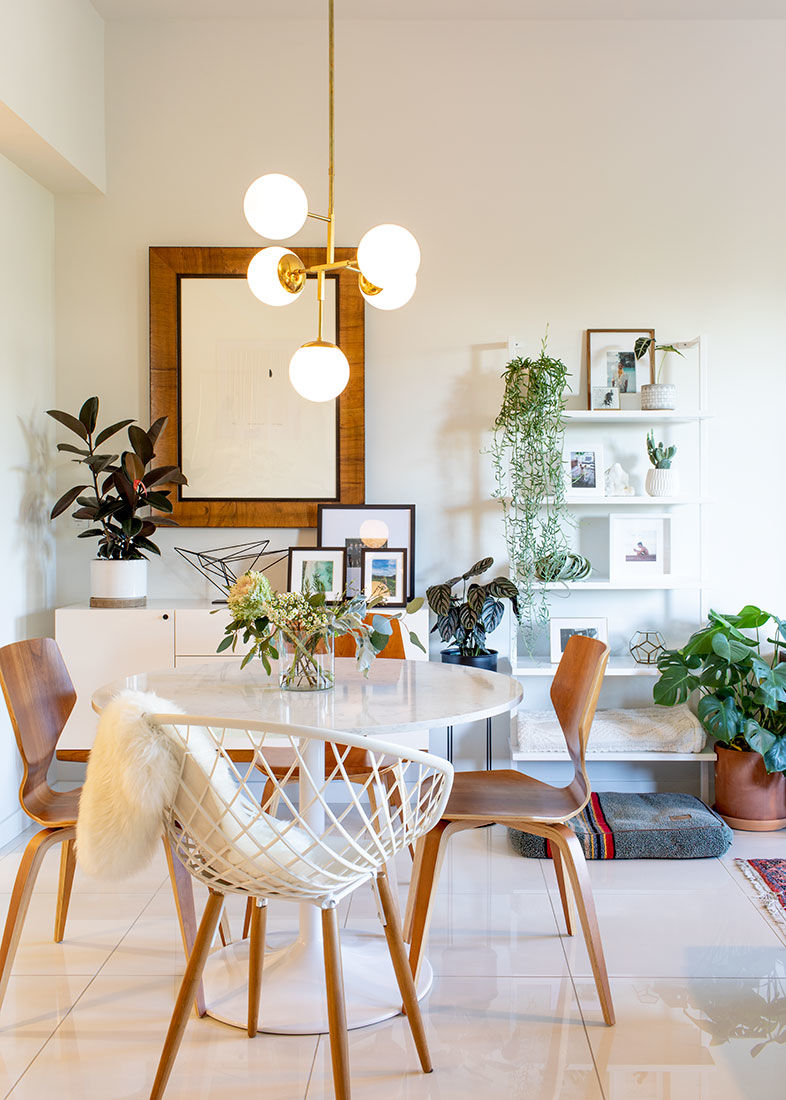 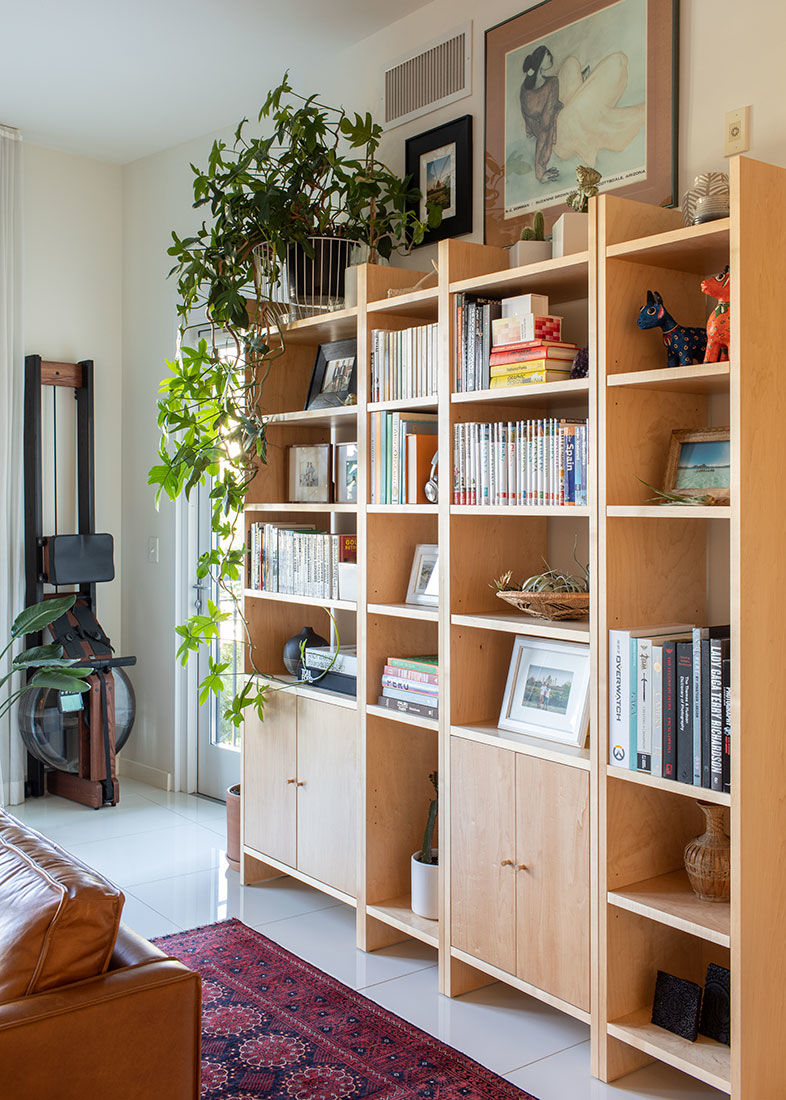 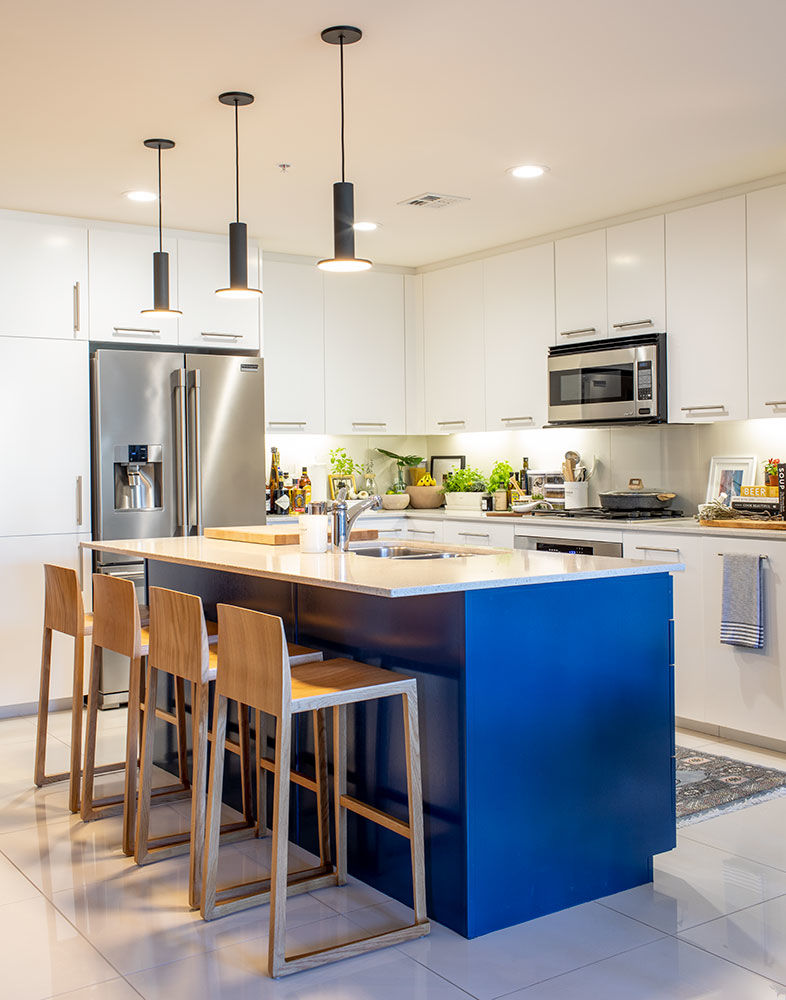 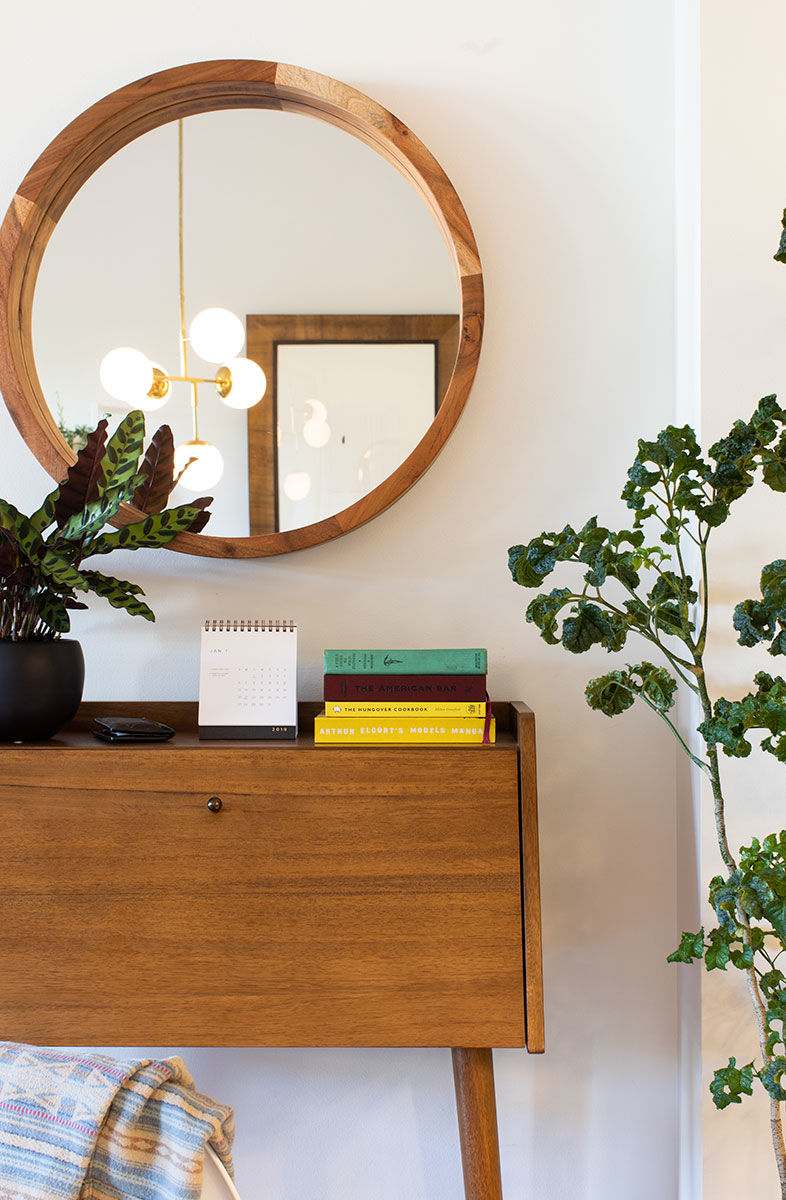 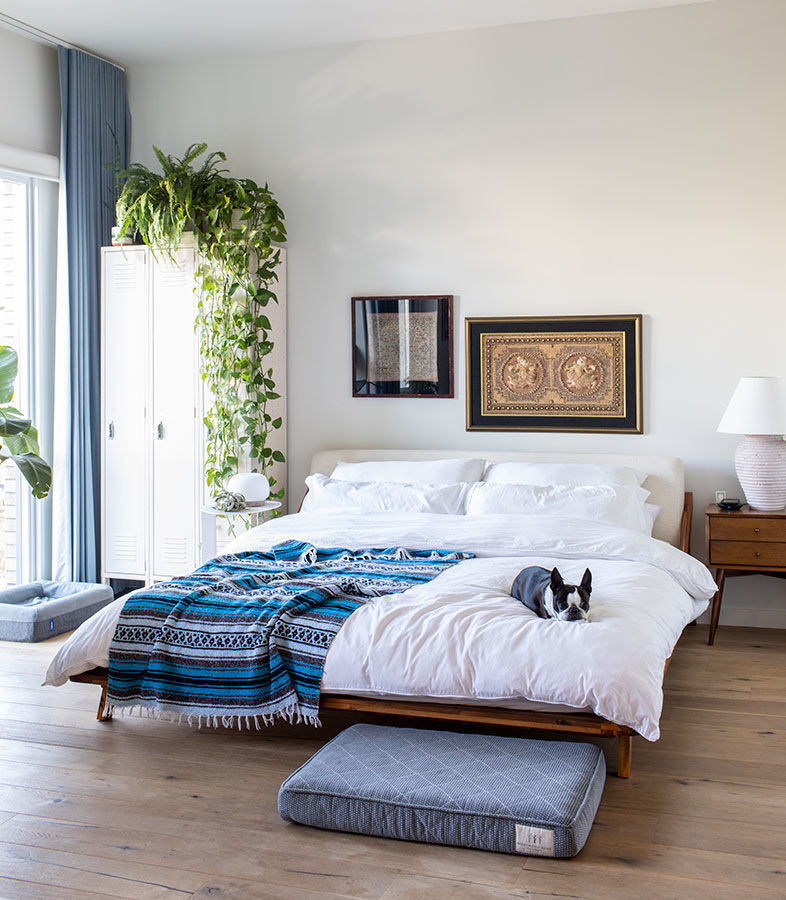 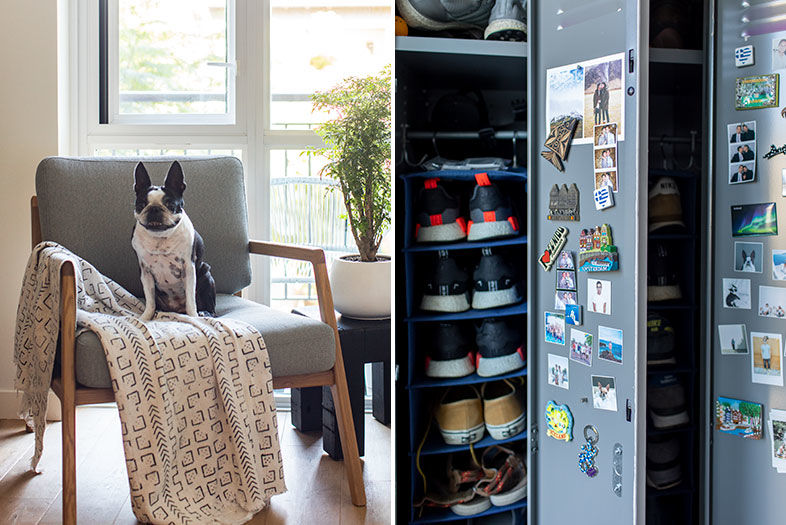 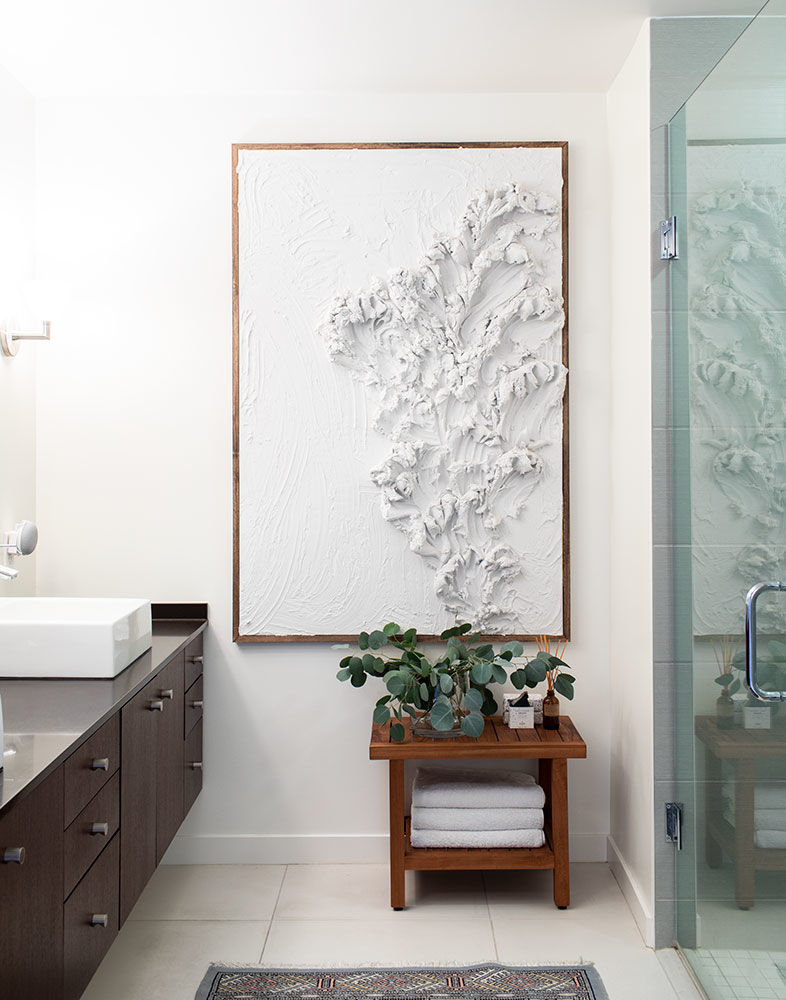 The only thing missing was a backyard.

"Since we’re in a condo, we thought, ‘Why not bring the garden inside?’" says Donald Rogers, a nurse at Sharp Chula Vista and main caretaker of the 20-some plants in the Mission Hills one-bedroom condo he shares with his partner.

"I have an eye for them, and then he has to take care of them," Mikee Catacutan chimes in, also referring to an herb garden that lives on the patio by day and comes inside at night for cooking. (Their basil makes for a killer spaghetti sauce.)

"We have a good balance," Rogers adds. "He’s very artistic, and I’m a lot more practical." That balance helped them outfit their 1,100-square-foot abode after they bought it last February. The open layout teems with first-time homebuyer pride, spiffed up in modern furnishings and carefully selected secondhand artwork that contribute to the feeling of a contemporary haven with Persian and art deco influences.

The duo have similar backgrounds. Born in the Philippines and raised in San Diego, they attended high school together but didn’t hit it off until long after graduation. When asked whether the couple of seven years plans to tie the knot, Catacutan jests, "This house is now our marriage."

A few details suggest that they’re still boys at heart. A pair of lockers beside their bed serve as shoe storage, with photos, stickers, and magnets hung inside the doors. In their downtime, you can find them playing Overwatch, their favorite video game, on the couch—which was one of their first major purchases, along with the bed frame and entertainment center.

Using his experience as a creative director for DrJays, a sneaker and denim brand, Catacutan assumed the role of interior designer, enlisting help from Anson Electric to install LED lighting and from PaintGreen to put a sleek white coat over the entire condo, including correcting the dark kitchen cabinets and applying a pop of blue on the island. He found his inspiration for the accent (and most of the other decor) on Pinterest. "I’ve never done this before," he admits. "I just started a board with everything I liked and, little by little, it came together. Then there was a lot of editing"—i.e., purchasing, test runs, and returns.

Before swiping their credit cards, he would even mock up a rendering of a room layout to visualize how the pieces would come together. It was a fairly successful approach, save for the kitchen bar stools—originally in gold, now in wood—and a few rugs from Little Italy’s Arman Fine Rugs that didn’t quite jibe.

"A lot of artwork didn’t make the cut," Rogers says. But the pieces that did were meant to make a statement—like the oversized plaster piece in their bathroom by friend John-Paul San Pedro. Then there’s the photography, which Catacutan snapped himself during the couple’s travels to Iceland, the Maldives, India, Mexico, and Bali, to name a few. Mementos like cookbooks and other tokens from trips sit on their custom-made bookshelf from Room & Board in the living room.

Regarding those elements that personalize the space, Catacutan says it’s a totally different landscape from their previous rental home. And the plants, too, are a little testament to their putting down roots, since they used to have only one to care for (the devil’s ivy sprawling atop their lockers).

"I think when we were renting, we didn’t take it seriously," Catacutan says.

Rogers agrees: "This is what we worked hard for. This is home."