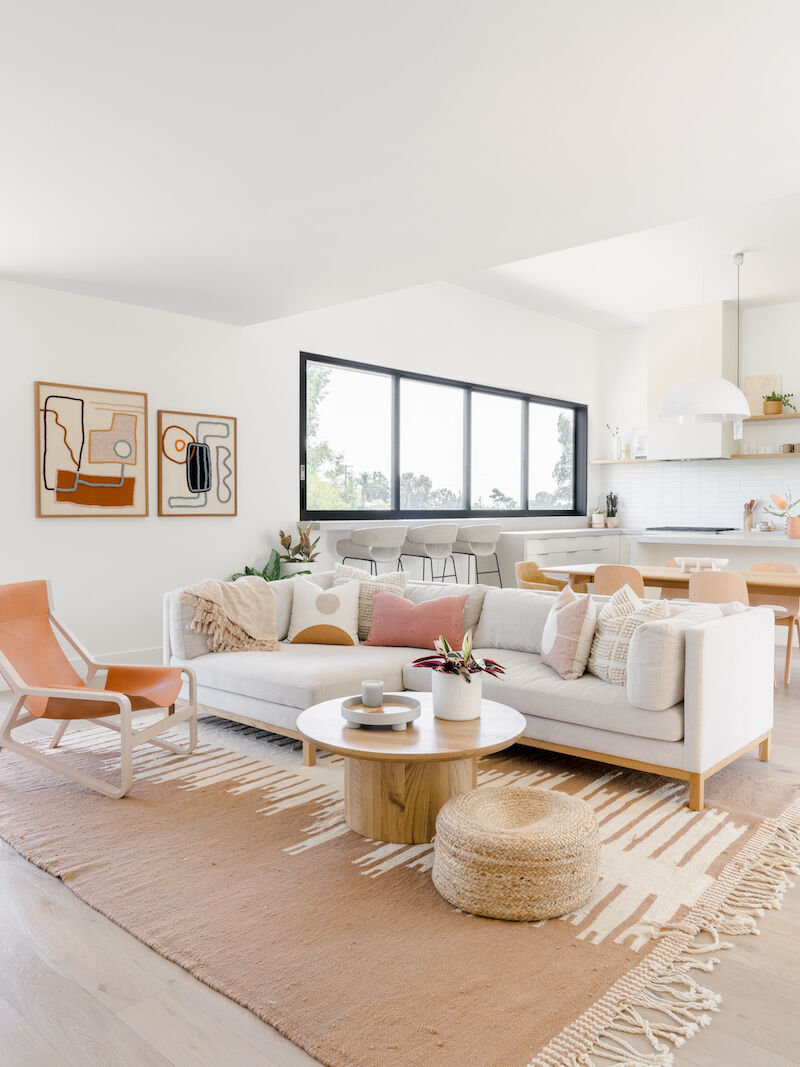 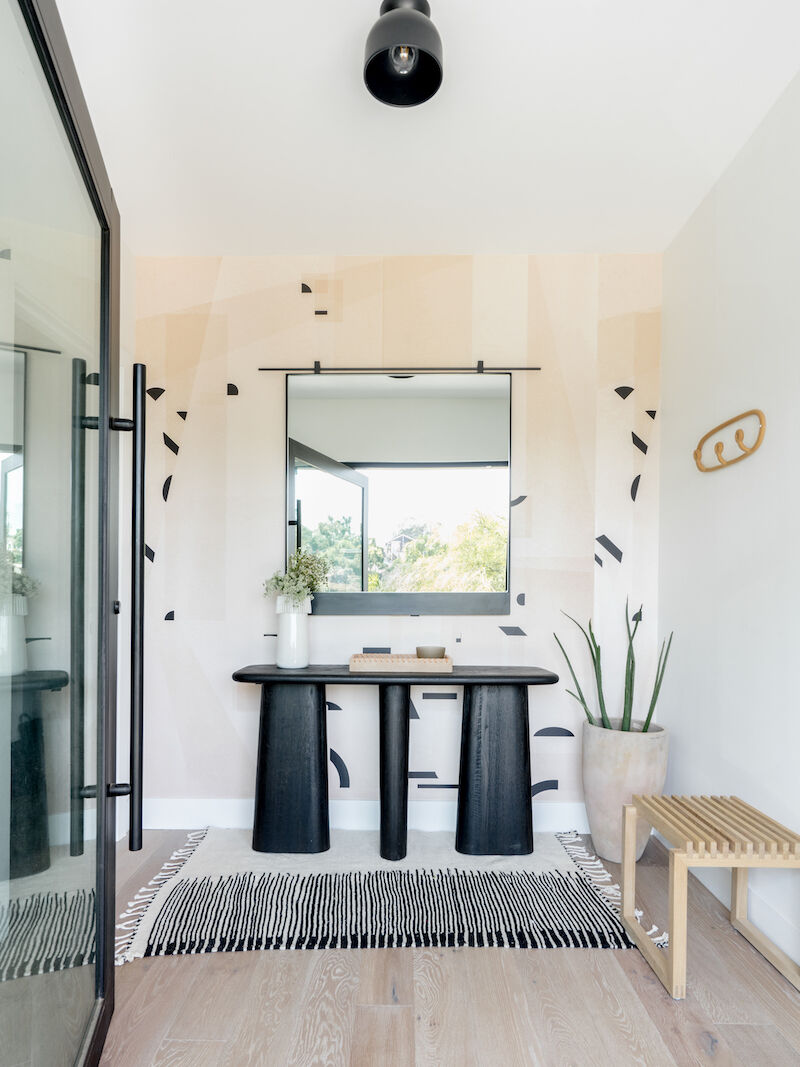 Designer Abbie Naber created an entry that she describes as “not too busy and not too boring.” The Shape Shifter mural wallpaper by Drop It Modern Design House provides an impactful but not overpowering backdrop for the Laurel console table by Union Home Furniture, the square mirror from Four Hands, and the oversized planter from local Landmark Plant Co. 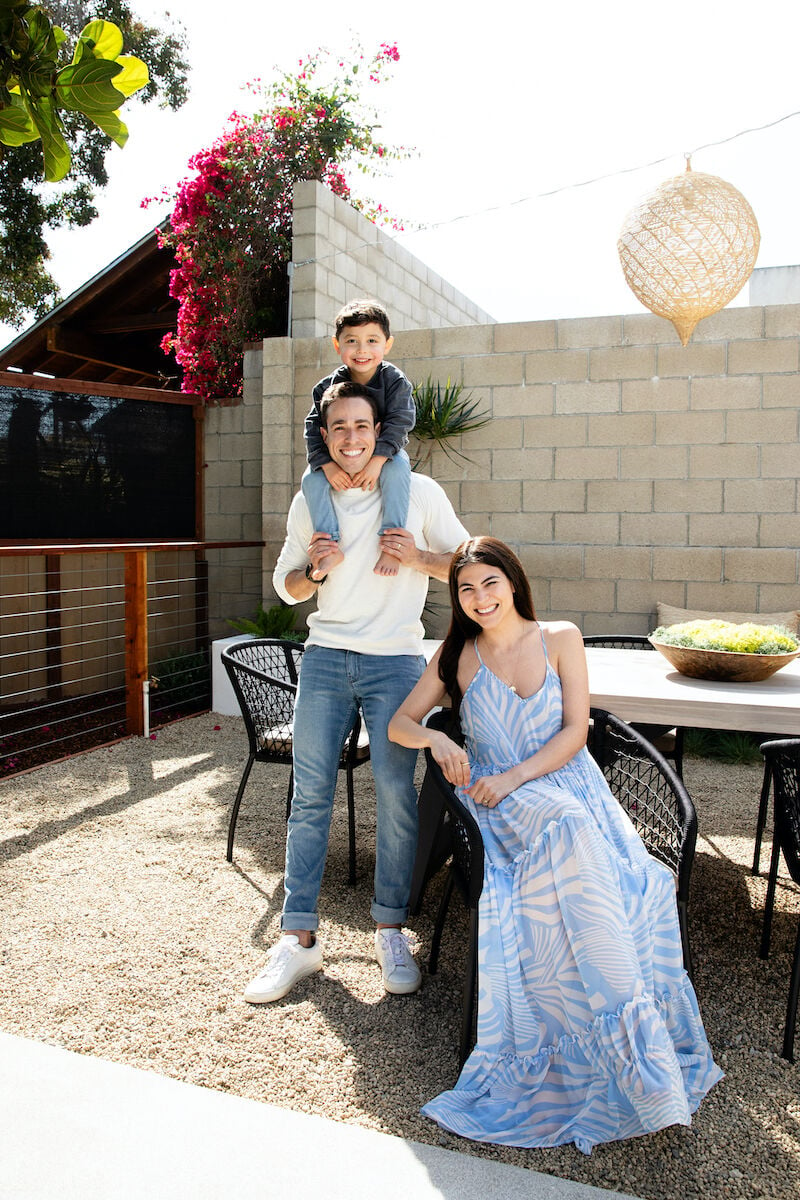 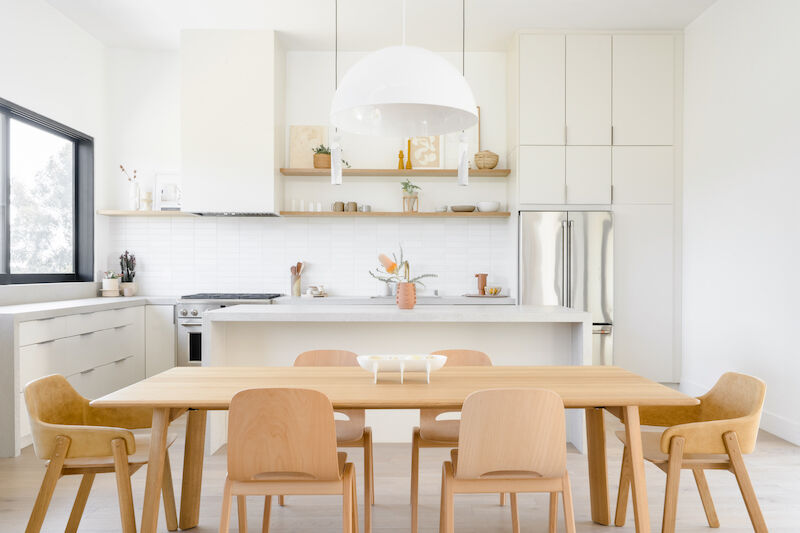 This space is Mathieu’s favorite spot in the house. “I can hang out in the dining room while my son plays in the living room,” he says. It’s also where family keepsakes and mementos mingle with new, modern items. 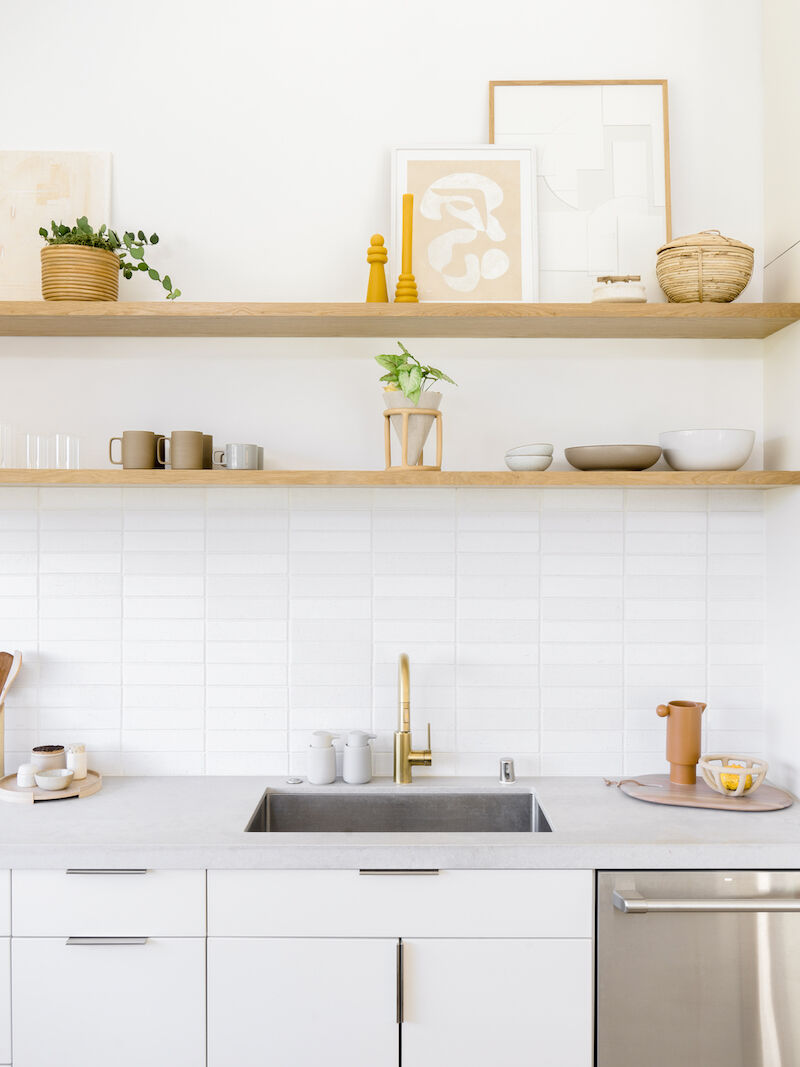 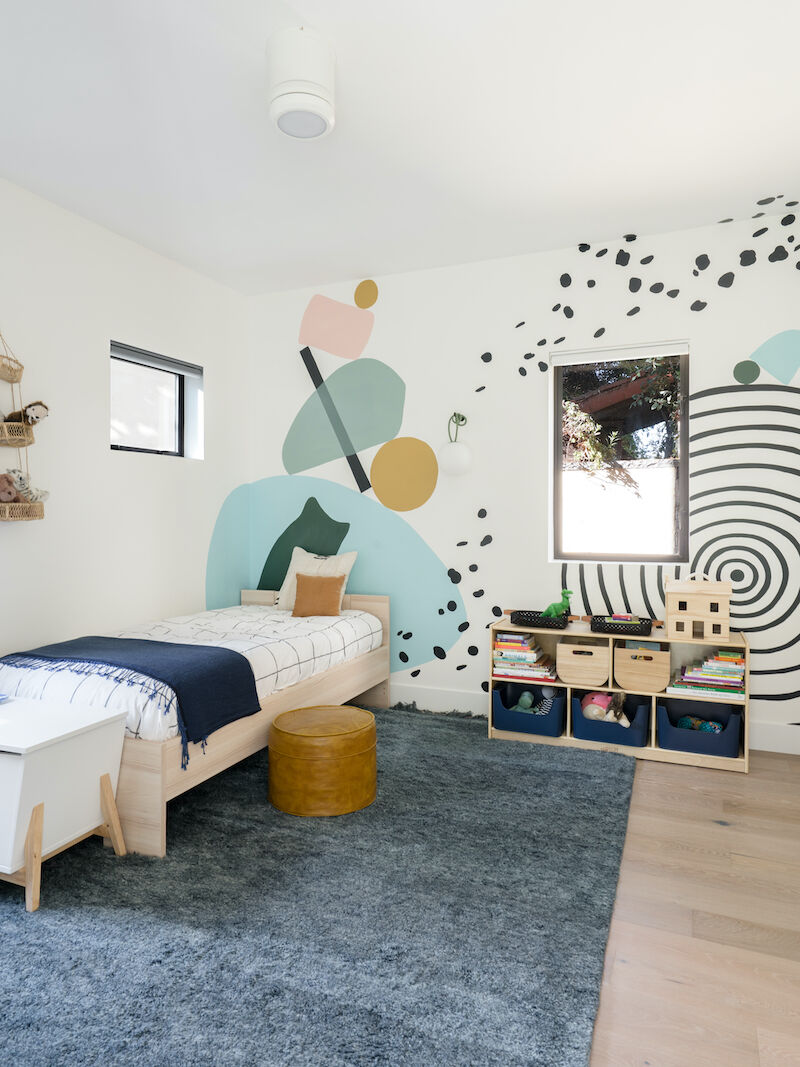 To create a fun, spirited, but stylish space for three-year-old Iza, Naber had San Diego artist Delilah Strukel paint the abstract design on his bedroom wall. Then, she brought in a bit of sophistication with the Scandinavian Designs bed, Urban Outfitters bedding, and Lulu and Georgia rug. In his bathroom, she paired a punchy green vanity with leather hardware from Etsy, and a minimalist sconce by CB2. 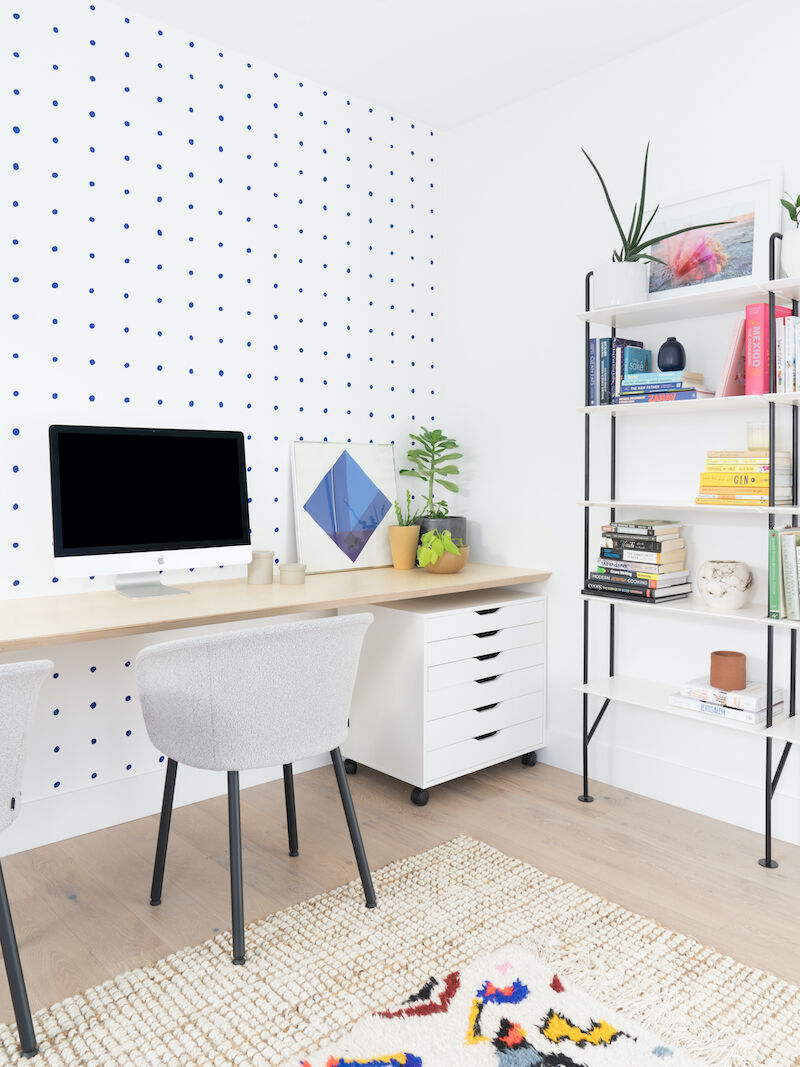 ON THE DOTTED LINE

Dimes, a blue-dotted wallpaper from Juju Papers, decorates the wall behind the desk in the office. On the adjacent wall, Hem shelving stores candles and all their books. 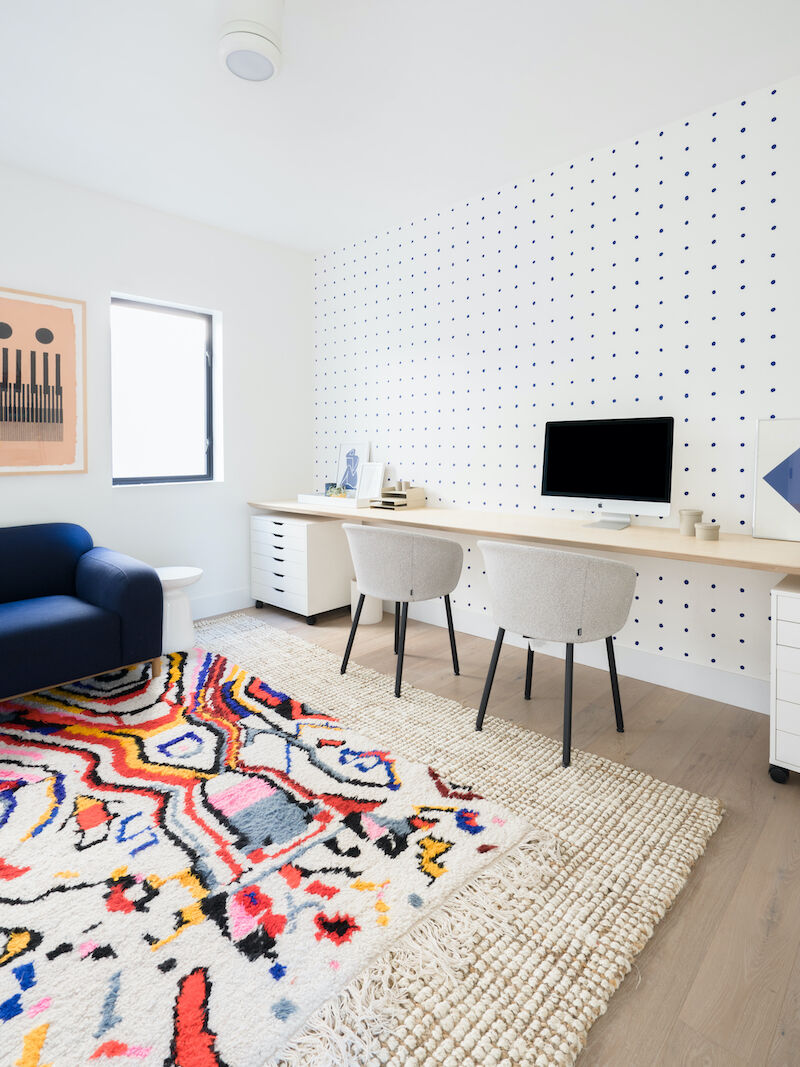 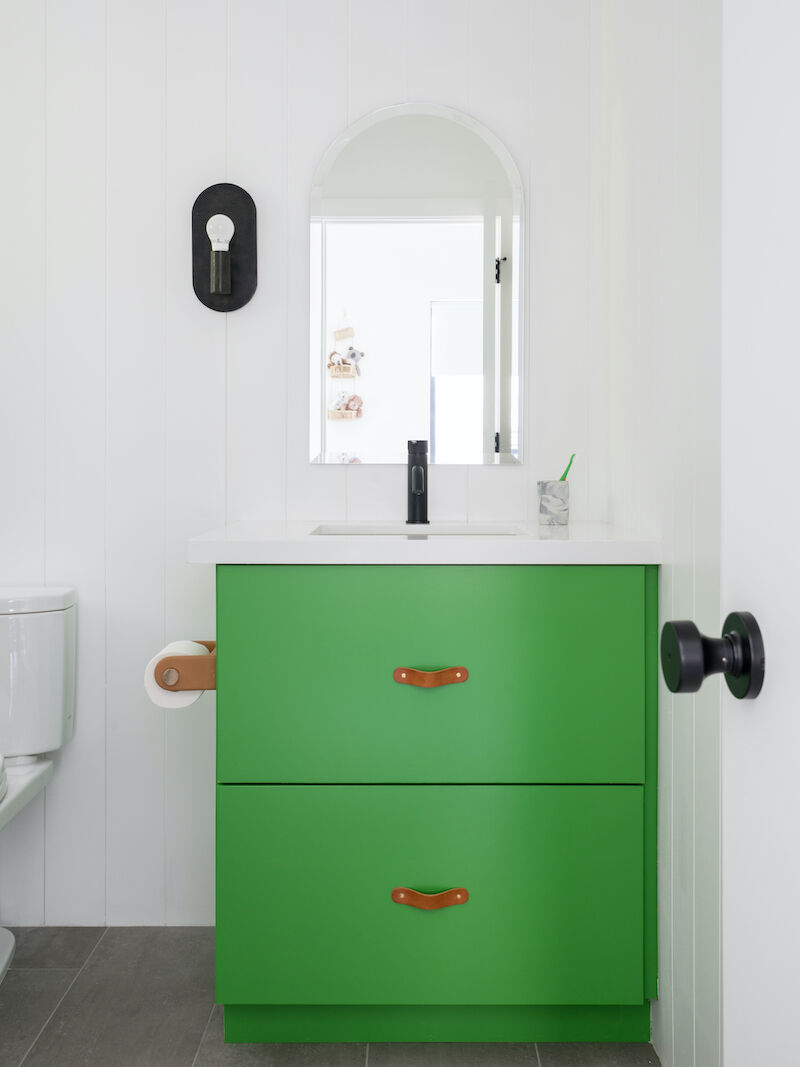 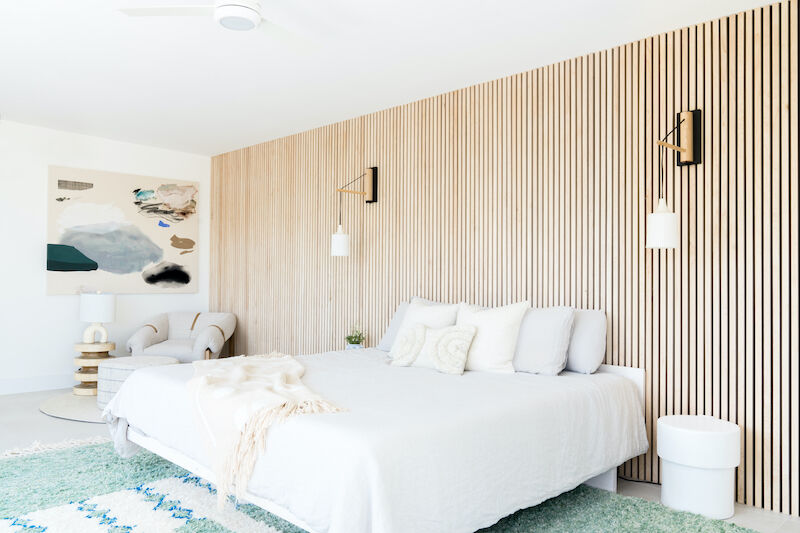 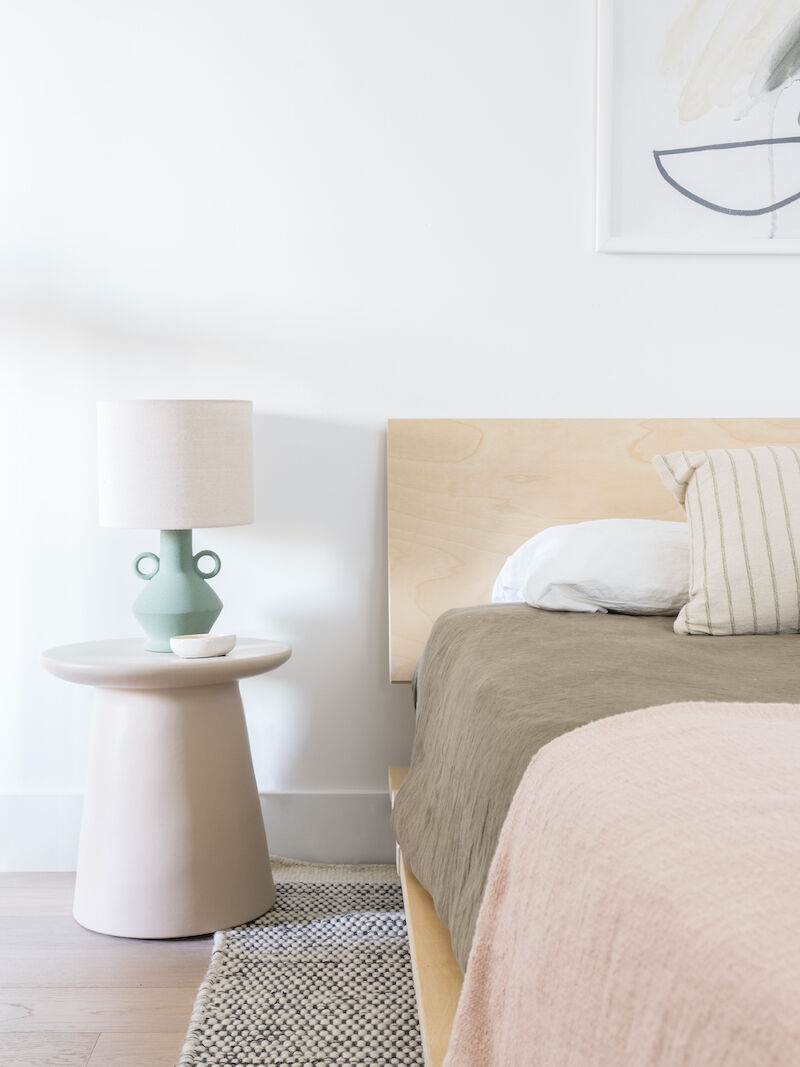 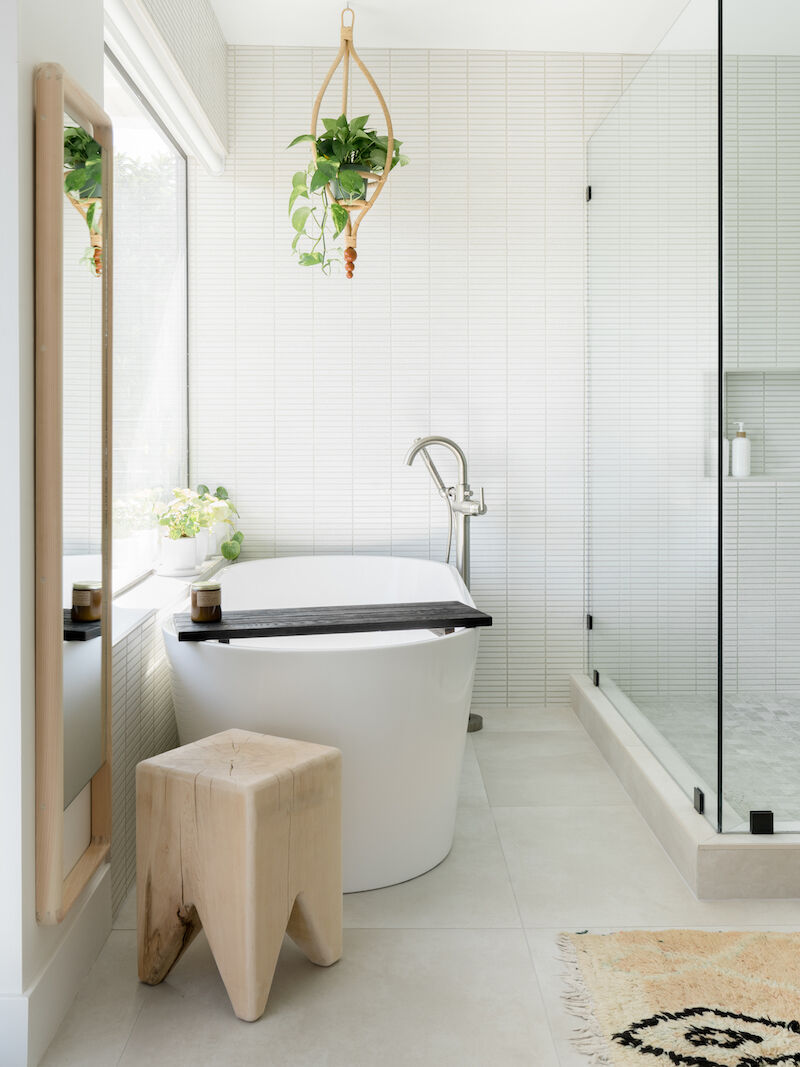 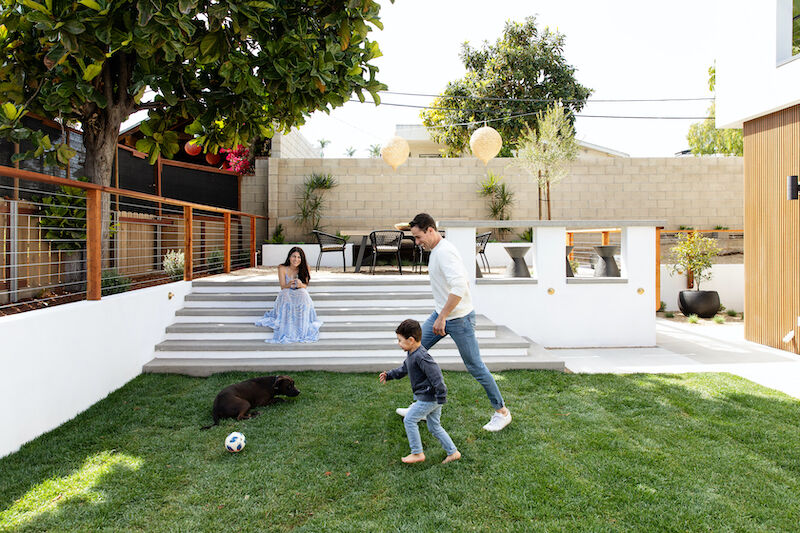 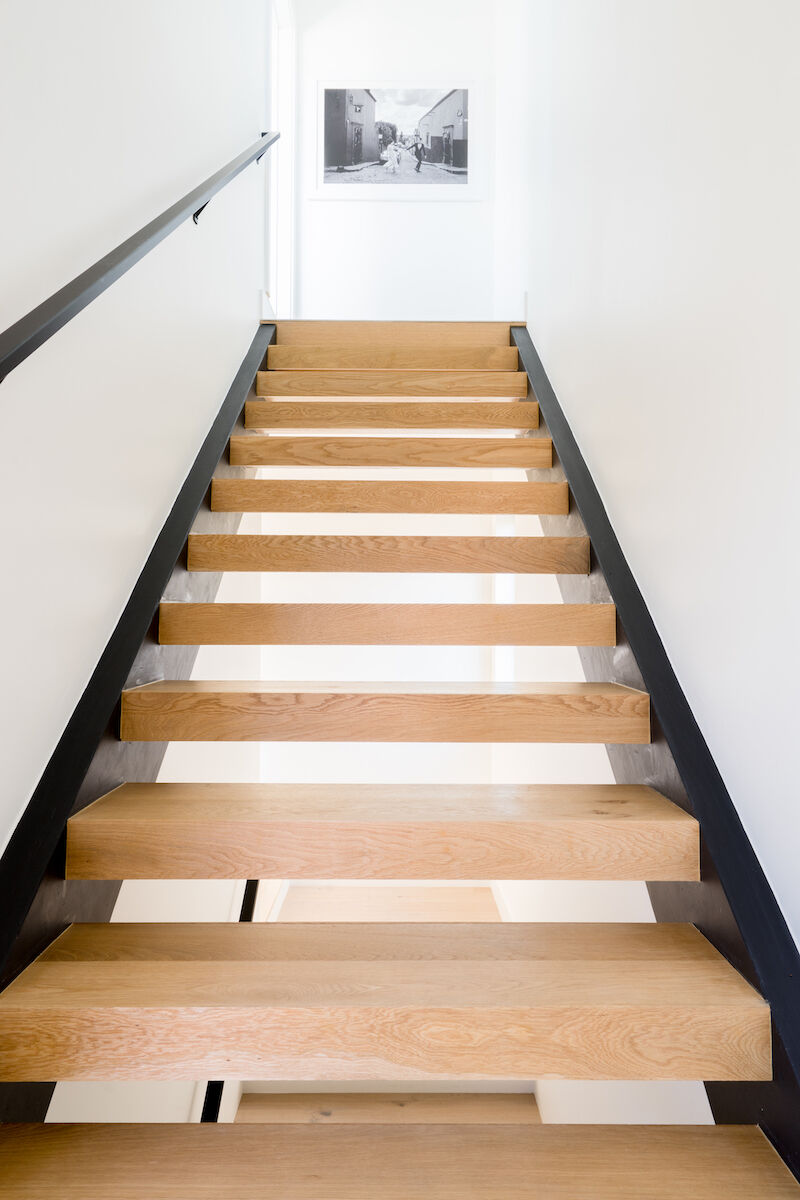 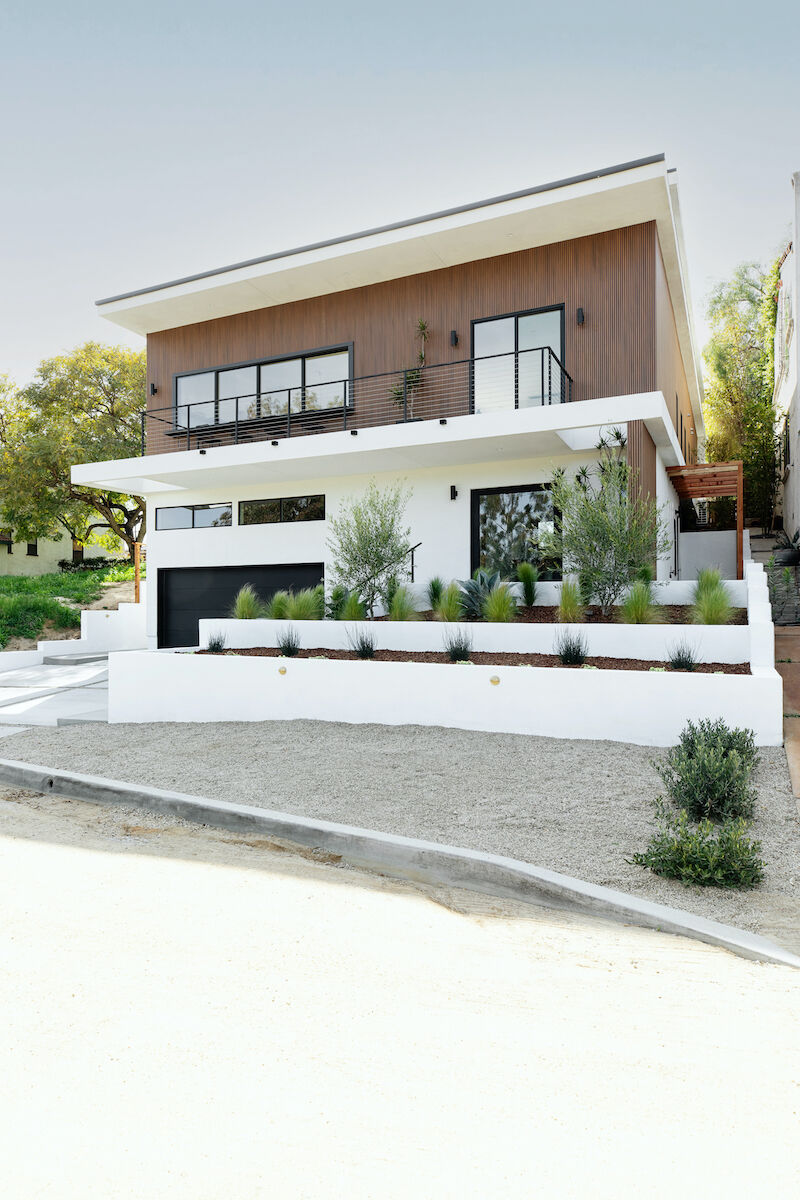 When Jex Musa and her husband, Mathieu Silverstein, were relocating from Orange County to San Diego with their son, Iza, they were looking for at least a three-bedroom, two-bathroom home in a neighborhood with a community feel, where other young families lived, and within walking distance of restaurants and coffee shops.

“We basically had unrealistic expectations,” Musa laughs.“We had been looking for six months. We were going on home tours in North Park and South Park that fit the criteria, but all the homes had one bathroom. We wanted a guest room, a second bathroom, and extra space for a home office because we both work from home. And we weren’t looking to live in a house while we remodeled.”

Then their Realtor called with an opportunity. A builder and an architect had drawn up plans for a lot on the canyon in South Park.“The plans were perfect for what we were looking for,” Musa explains. “The first-floor room would be great for guests, and the primary suite was on the third floor by itself. It checked all the boxes.”

The floor plan called for the kitchen, living, and dining rooms to merge into one open space with high ceilings on the second floor, and four generously sized bedrooms were dispersed across the three levels, with plenty of space for Iza’s room, an office, and a guest suite.

Musa and Silverstein were sold. They weren’t in a rush to move, since they were still living in Orange County, so having to wait for a new home that fit their specifications wasn’t an issue. In fact, it was ideal.

They began their search for a local interior designer to come in as soon as framing was complete. They were looking for a designer who shared their style sensibilities, and preferred to work with a small-business owner instead of a big design firm. “We didn’t want to hire a designer and then work with a different point person,” Musa says.“That dynamic didn’t appeal to us.”

They found everything they wanted in Abbie Naber of A. Naber Design. “When we met with her, we had a good vibe,” Musa adds. “She hadn’t done a new build, and we hadn’t, either. We thought it’d be fun to do it together.”

Naber got to work right away, sourcing the hard materials first. That was in January 2020. The couple made a few trips south and visited the site with her to make decisions and assess progress. That changed in March, when suddenly all decisions had to be made virtually. Naber’s design filled the home with a modern, minimal- but-warm feel. The interiors combine a neutral base with layers of color and texture and artisanal pieces that highlight their organic imperfections instead of hiding them.

“Jex and Mat favored neutrals for the hard finishes, items that would still look classic years from now,” Naber says.“We mixed textures and used light beige and off-white tones that still provide a nice contrast to the bright white walls.”

Look closely, and the milky kitchen cabinets are actually a bright beige that has gray undertones (the color is Olympic Mountains by Benjamin Moore); the Caesarstone countertop resembles light concrete but has hints of off-white, gray, even touches of brown in it; and the matte white bricks in the backsplash (by Clé Basics) each vary slightly in texture and color.

Naber added floating shelves on either side of the range hood to bring balance to the soaring ceiling. The warm wood nods to Scandinavian design but also provides a place for the couple to display art and other objects that have special meaning to them. It’s where Silverstein keeps a wooden coffee grinder that belonged to his grandparents, and little paintings the couple bought in Mexico.

Musa moved four Japanese panels that hung in her grandparents’ home for 60 years across the country from New York, and Naber found the perfect place for them in the hallway off the main room. The rest of the art is new and was sourced collaboratively between Naber and the couple. “Similar to our desire to support Abbie’s female- owned small business, we wanted to find female artists to feature in our home,” says Musa, who has an enthusiastic appreciation for art. A commissioned piece by Los Angeles artist Maja Dlugolecki hangs in the main room, a piece by local painter Karina Bania cozies a reading corner in the primary bedroom, and a custom creation by San Diego muralist Delilah Strukel brought color, shape, and fun to one wall of Iza’s room.

“The power of paint is undeniable for transforming a space,” Naber says.“The mural in Iza’s room is much less predictable—and a lot more fun—than a solid wall. It’s also not an overly juvenile design he’ll outgrow in the near future.”

The preschooler’s bathroom also uses a slightly unexpected shade of kelly green for the custom vanity.

The rest of the home doesn’t use color so boldly. Artwork, rugs, and other textiles bring in shades of mint, blush, rose, and earthy desert tones. “It’s really a delicate balance between color and neutrals, pattern and texture,” Naber explains.

Just beyond the massive pivoting front door that opens onto the ground floor, the entryway sets the stage for a space filled with organic shapes, modern furnishings, colorful art, and lots of details that celebrate local shops and makers.

“Supporting small businesses is always a sticking point with me when sourcing furnishings and styling items,” Naber says. “And Jex and Mat totally embraced that. From the first questionnaire they filled out for me, the strategy was not to fill the house with items that had a quick turnaround and were predictable.”

So even in the guest suite off the entry, the decor shows a lot of love for SoCal companies. Naber turned the awkward space under the stairs into a dressing area. There’s a unique planter from Carmen Ellis, a bench from Saffron + Poe, and hooks from The Garage Collective— all women-owned small businesses.

Some big brands represent as well, in a handful of furnishings from Blu Dot, tables and accessories from CB2, and office file cabinets from Ikea.

“I love to find one-of-a-kind pieces, but it doesn’t mean you can’t add personality with budget-friendly items, too,” Naber says. “It’s all about knowing where you want to splurge and where it makes sense to save.”

Musa and Silverstein’s third-floor bedroom and bathroom suite represents the former. The space is meant to be a retreat in every sense of the word, so Naber selected light woods and a soothing palette that create a Zen vibe. Woodworker Josh Rice built the 20-foot wood-slat wall using one-inch raw maple boards. The wall opposite looks out over a canyon to the east. And the en suite bath includes a soaking tub that sits in front of a large picture window.

“Our bedroom and bathroom are light-filled and peaceful,” Musa says. “They feel secluded from the rest of the house, a place where I can truly recharge.”

But when it’s time to energize, that’s what the office on the second floor is for. The couple already owned the vivid rug, so Naber designed around it. The blue-dotted wall complements the cobalt sofa, and the wall-to-wall desk, built by Rice, provides space for Musa and Silverstein.

The bookshelves Naber found for the office might be Musa’s favorite, considering that the couple has moved ten times. “This sounds silly,” she says, “but I was excited that Abbie created a space for our books. We’ve been moving boxes of books for years; it feels good to have a place where we can finally unpack them.”

Though the couple moved in last summer, they’ve been unable to use the house the way they’d intended—to entertain and host friends and family. They started the outside build this year by adding a patio dining area, but they have yet to use it with guests.

“We’re ready to share all this with others,” Musa says. “We’re ready for Iza’s grandparents to stay, and to give friends a place to crash when they visit San Diego. Maybe this year.”