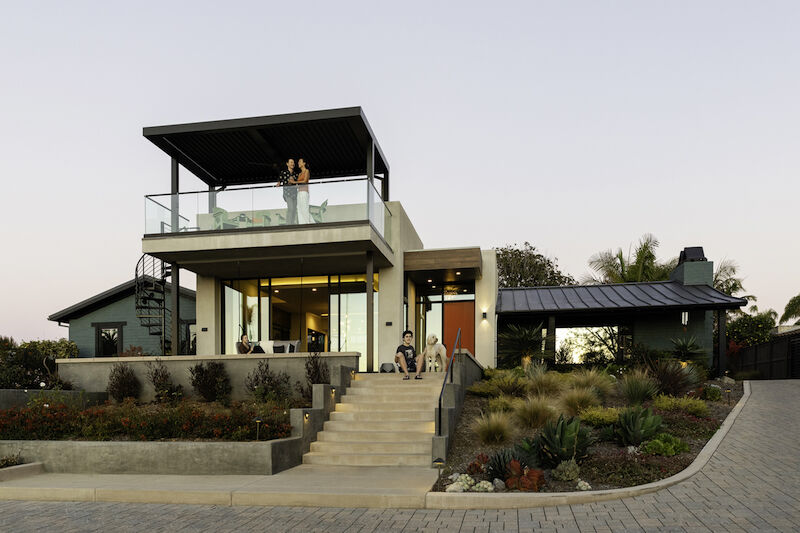 Kara and Jeff Chine and their two kids, Olive and Jack 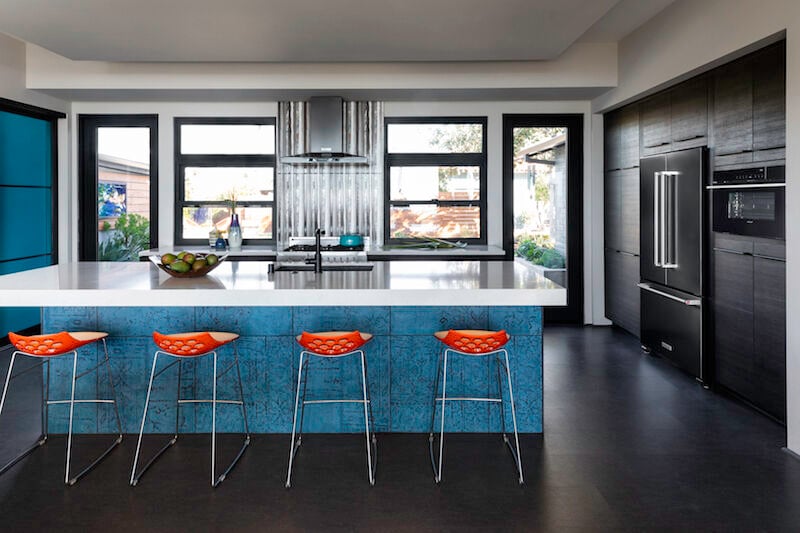 The 850-square-foot remodel of the center of the Chine family’s Encinitas home now affords them unobstructed ocean views. The blue and gray furnishings in the room intentionally evoke the various colors of the sea. 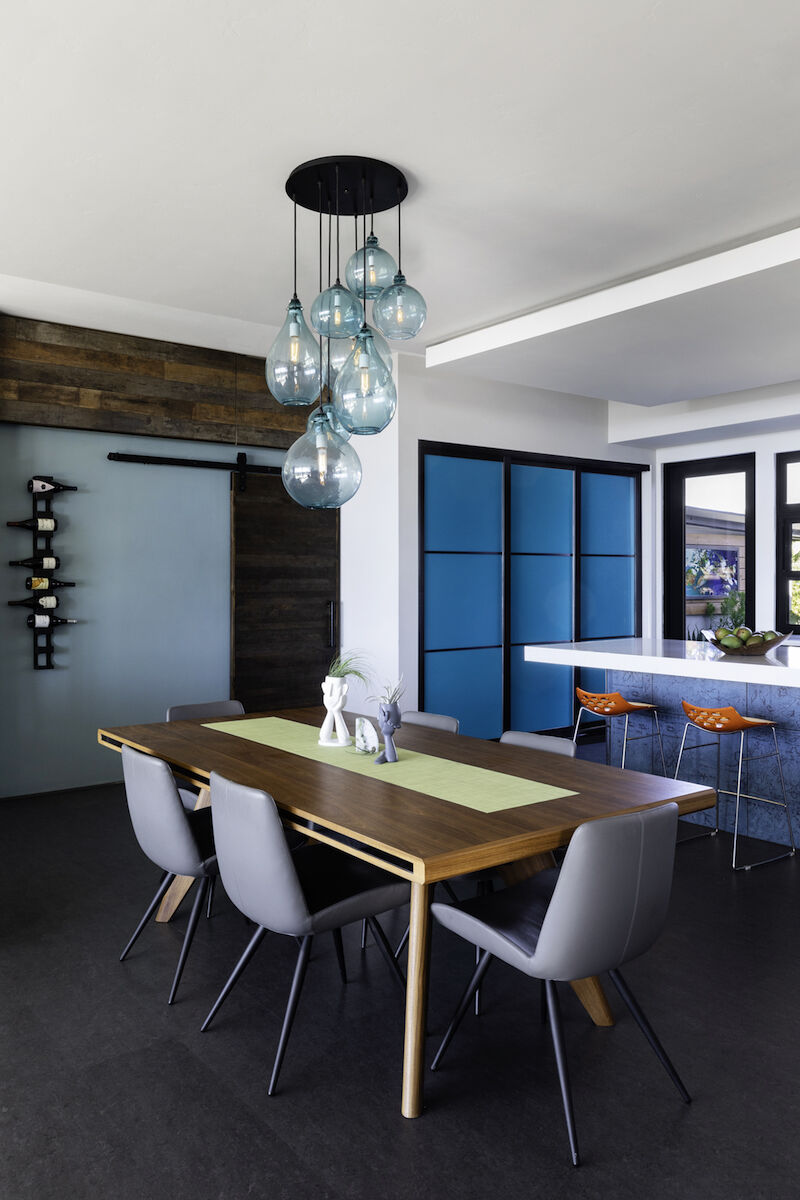 Kara found the turquoise handblown glass light fixture, which resembles bubbles and hangs over the dining table, from Sundance. It complements the blue porcelain AKDO tile that wraps the kitchen island and the teal glass on the sliding Eclipse pantry doors from Contractors Wardrobe, which cleverly hide an espresso and wine bar, lots of storage, and another countertop. 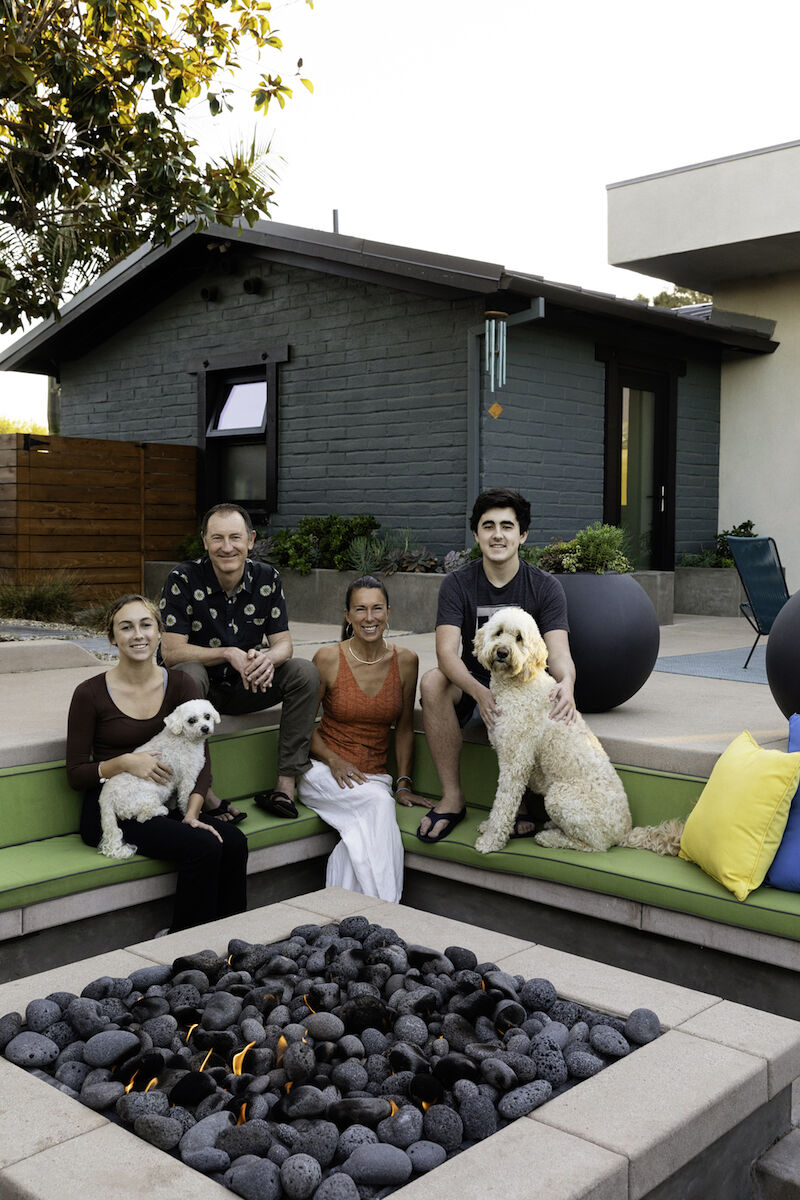 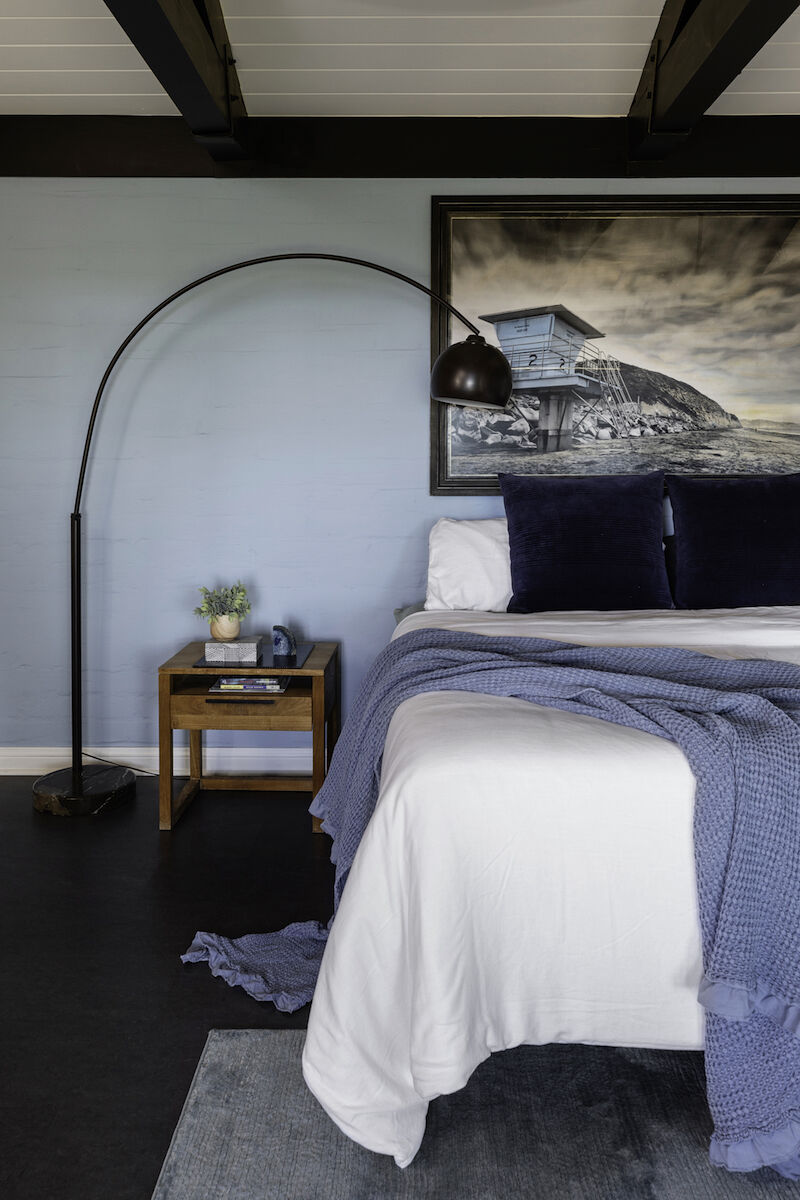 The Torrey Pines State Beach image “is our favorite hike,” Kara explains. Juno poses in front of the adjacent ceramic, wood-like tile wall. Around the corner, a multicolor Forbo Marmoleum floor jazzes up the bathroom. 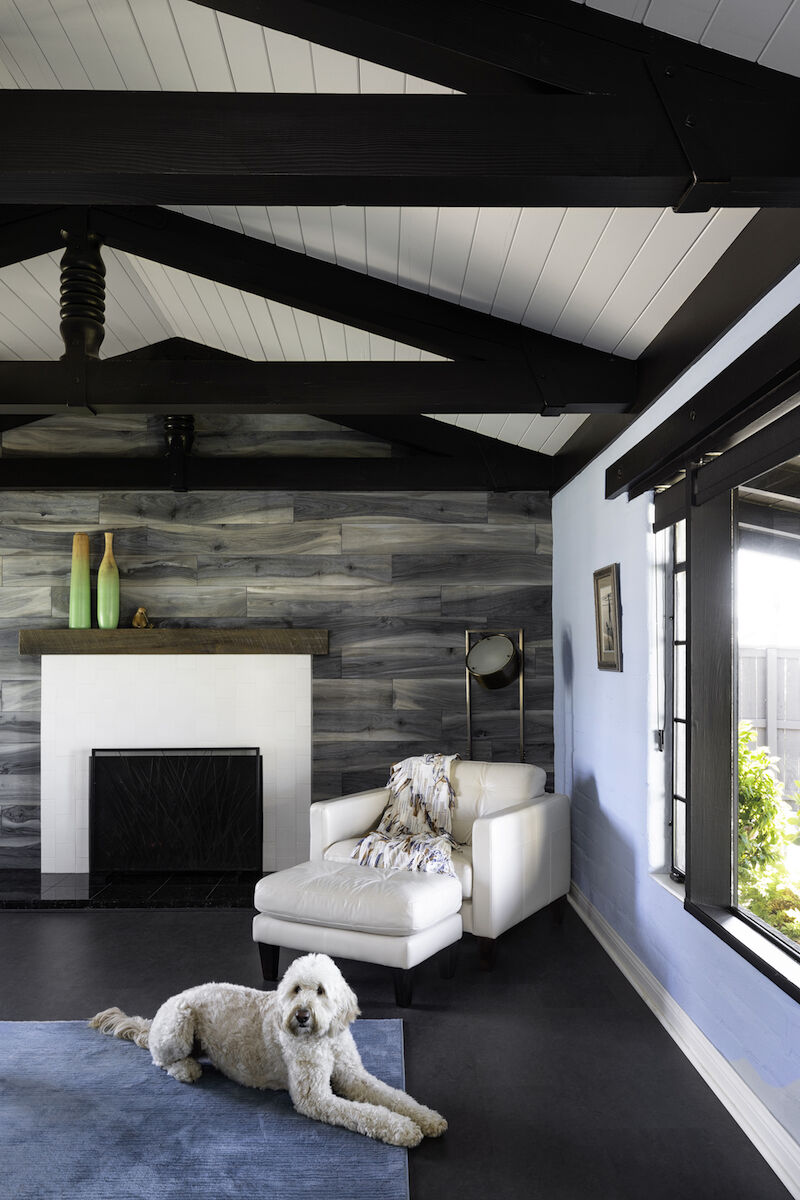 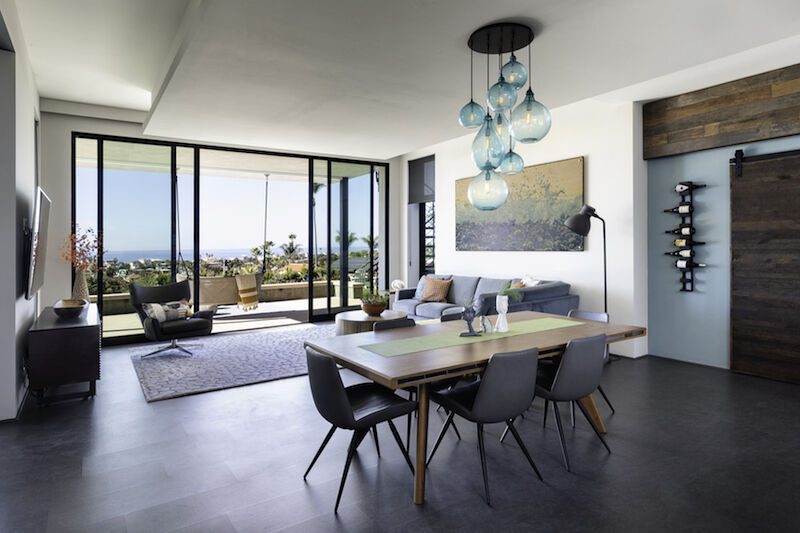 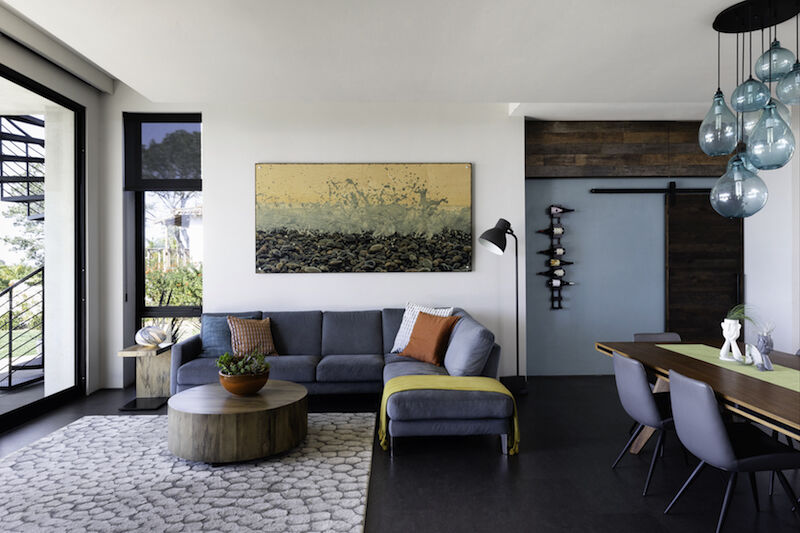 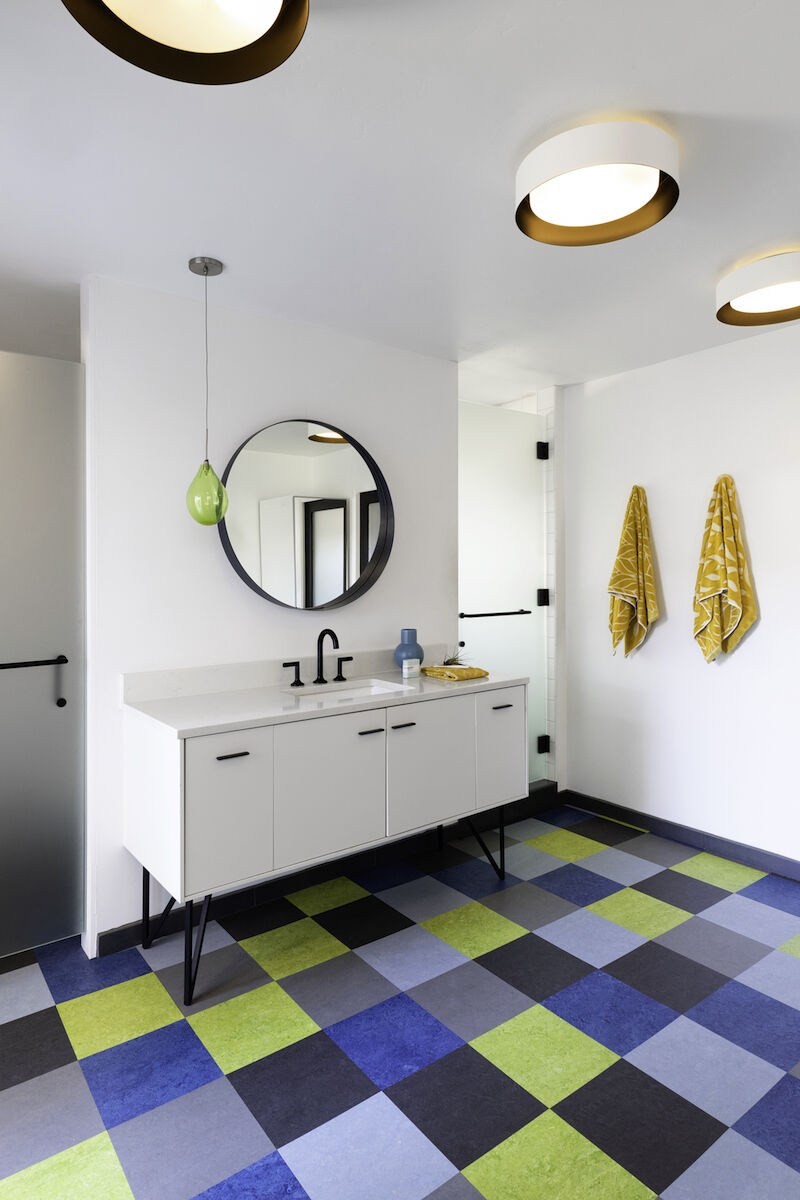 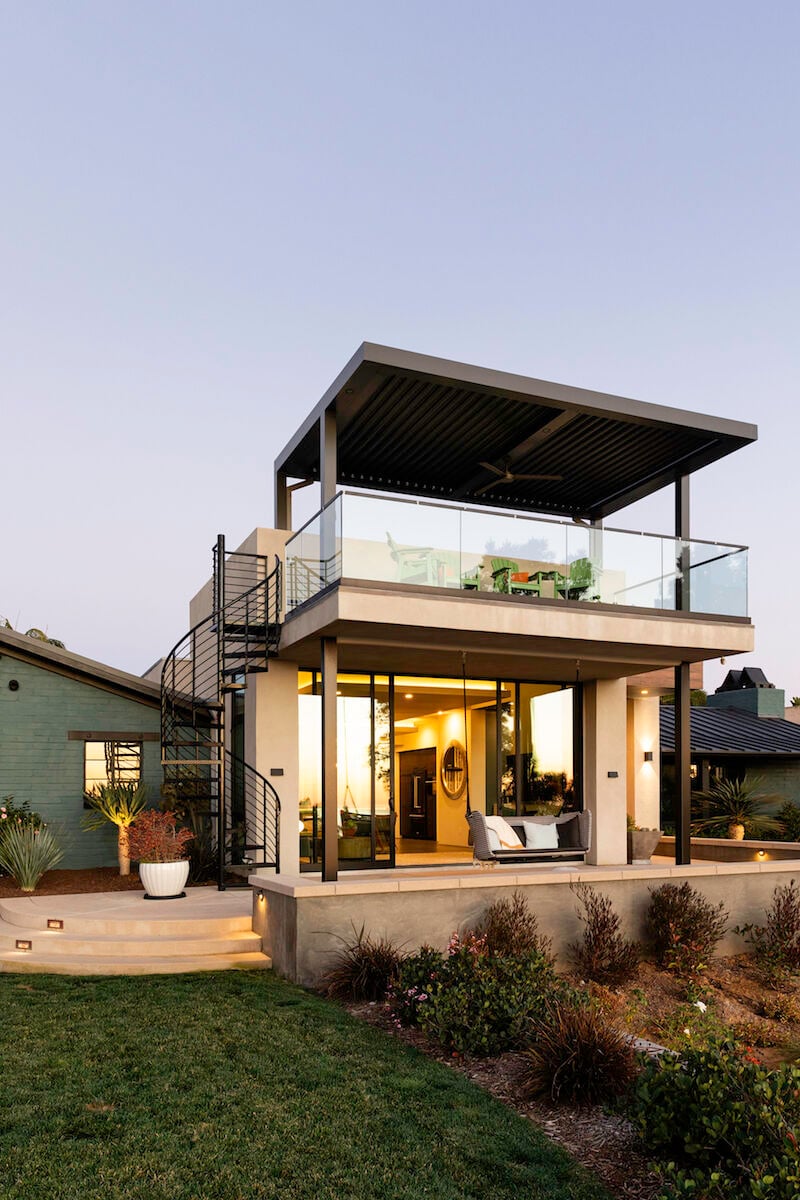 It was Thanksgiving Day four years ago when Kara Chine dragged her husband, Jeff, and their two kids, Olive and Jack, to Coast Highway 101 before 7 a.m. to watch the annual Encinitas Turkey Trot. She didn’t know anyone racing

that day; she was there doing a little research.

“It was great,” she says. “Nearly every person participating was wearing a turkey on their head or a tutu. There were people pushing strollers, people walking, people running, and I said, ‘These are my people; this is where I want to live.’”

Encinitas had just the right community feel in a walkable area near the ocean. It checked all the boxes on Kara’s neighborhood wish list.

At the time, she and her family were living in Rancho Santa Fe. “We were in a gated community, and while it was very nice, it felt soulless to me, and I used to tell my family that I felt like I was dying behind the gates,” she admits.

A public school teacher, Kara longed for the tight-knit community feel she’d had in the Mission Beach and Ocean Beach neighborhoods, where she lived for nearly 20 years prior to getting married and having kids. So she began her quest for the perfect new home. She knew she wanted a house that she and her husband, Jeff, could live in forever—and not have to downsize when their kids (now 17 and 15) moved out. And she knew she loved Encinitas.

For his part, Jeff wasn’t opposed to a beach community, but neither did he want to feel like he was on top of his neighbors. So Kara began driving up and down the streets of Encinitas looking for properties for sale that would suit all of their needs. Her Realtors—Kevin and Ryan Dalzell, with the Dalzell Group at Compass—drove her by a property that wasn’t for sale.

The adobe-style ranch home, built in 1950, wasn’t exactly what Kara envisioned, but the halfacre property, on a hill with an ocean view, was ideal. “It turns out, the couple living there was thinking about downsizing,” she explains. “We bought the house without ever going inside.”

Initially, the Chines thought they were going to tear down the house and start from scratch. “But we lived in it for a year after buying it, and the house had a good energy, a good feel,” Kara says. The home also came with an interesting history: The original owner was Dorothy Spencer, an Academy Award–nominated film editor credited with shattering several glass ceilings in Hollywood.

Besides the good vibes the family felt there, leveling a house that had good bones started to feel like it would be throwing money away. What they wanted was a comfortable house for their family of four that didn’t feel too big, facilitated an indoor-outdoor lifestyle, and enhanced the ocean view, something the original floor plan’s tiny windows neglected.

For the remodel, Kara went to a seminar hosted by Jackson Design and Remodeling and saw some projects that resonated with her colorful, artistic style. It took only one meeting with architect John Kavan to seal the deal.

“John brought a piece of art to our first meeting to show us his inspiration—and that was it, ” Kara explains. It was a work from Piet Mondrian, a Dutch painter known for his bold, geometric designs. Kavan chose one of Mondrian’s works featuring the golden ratio, a mathematical sequence that produces aesthetically pleasing spirals in geometry. He overlaid the art on top of the plan and used those proportions in designing the Chines’ home. The challenging part came in marrying this modern, rectangular concept with the existing adobe-style home.

Kavan explains that he used the Guggenheim Museum in New York as a point of reference. The addition—by Gwathmey Siegel and Associates, Architects, between 1990 and 1992—to the Frank Lloyd Wright building “didn’t match the original, but instead was deliberately contrasting.” Where Wright created an organic spherical shape, the addition is a rectangular tower.

Taking a cue from the museum, Kavan let disparity lead his design. He cut out the middle of the house and designed a modern, industrial structure that seems to push through the existing adobe home on either side as it juts toward the ocean. He retained the charm of the old home, but modernized it with charcoal gray paint and an industrial metal roof in place of the old red tile.

And he added a second-story deck, accessed via exterior spiral staircase, where Kara, Jeff, and the kids can take in 180-degree ocean views.

Inside, what was once the living room became the couple’s bedroom, complete with the original ceiling beams and picture window but with new wall tile, floors, and paint. The space also includes a large attached bathroom and a walk-in closet. On the other side, the sun room was converted into Olive’s bedroom. Jack got the other room, and the office has a Murphy bed for guests.

Mondrian’s influence is most apparent at the entryway, where the front door, windows, and overhang were proportioned artistically. While the new great room, dining space, and kitchen feel open and unified, ceiling panels and lighting subtly designate each area’s purpose. Various sky and sea colors mingle here: teal, turquoise, gray, and blue with pops of Kara’s favorite color, orange. She already owned the Bertazzoni range, and she searched forever to find just the right pumpkin-colored bar stools. “Now they’re in every AT&T store,” she laments.

The space is impressive without being grandiose. The Chines wanted every decision, every furnishing and finish to make sense for their lifestyle and budget. Instead of installing custom cabinetry throughout the kitchen, the couple opted for a pantry with teal glass doors that slide to reveal a much more economical espresso and wine bar with ample storage. In their bathroom, Kara opted against colorful-but-costly tiles in favor of low maintenance, antimicrobial Marmoleum modular flooring in a whimsical checkerboard pattern.

Kara and Jeff made a conscious decision to support local artists, many of whom came to hang their pieces themselves. Josh Bernard installed his photo of Carlsbad State Beach in the entryway; Roy Kerckhoffs put up his image of Torrey Pines State Beach in the couple’s bedroom. At the end of the hallway, “The Dude” holds court—a conversation starter, for sure. “The Big Lebowski is our family’s favorite movie,” she explains.

At the same time they’ve made their home reflect the local scene, the Chines have become part of the Encinitas community. Jeff bought a Vespa to cruise into town to pick up coffee or takeout, the couple runs five miles together every other day at low tide, and friends and family pop by just to say hi, something Kara says never happened when they lived in the suburbs. Oh, and she adds that watching the sun set into the Pacific Ocean every night from their modern porch swing hasn’t gotten old at all: “We love this magical piece of the earth we get to call home."